Rick Wakeman is a man on a mission: to show that pop stars of a certain age can be prolific. At 69, he already has 100 albums under his belt, not counting the Yes LPs that made his name. Between 1999 and 2003, Wakeman managed to release 18 albums.

Many of them sank without trace, but lately his stock has been rising. Piano Portraits, from 2017, was his first silver disc for 40 years, and the follow-up, Piano Odyssey, went into the top ten in October. It surely won’t be long before he brings us Piano Iliad.

On stage, Wakeman wears a vast pinstriped coat that turns out to have room for two people: a pianist and a TV personality. 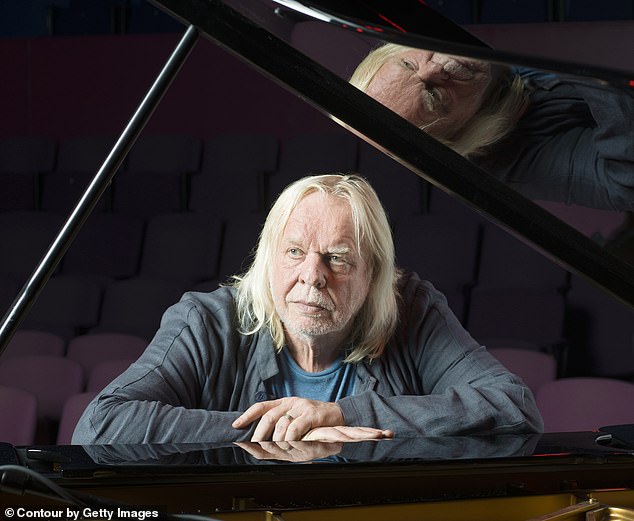 Rick Wakeman is a man on a mission: to show that pop stars of a certain age can be prolific. At 69, he already has 100 albums under his belt, not counting the Yes LPs that made his name

The pianist is more of a craftsman than a showman. Facing away from the fans, he plays with precision and delicacy, and his version of Liszt’s Liebesträume is sublime.

The TV personality is more interested in the ridiculous. He tells bawdy old stories which have, he says, ‘a modicum of truth’.

This is the Wakeman who revealed in 2004 that he had a secret sixth child – in a newspaper interview whose author, Rachel Kaufman, duly became his fourth wife.

During a quiet section at a Yes gig in 1973, Wakeman ducked behind his keyboard and tucked into a vindaloo a roadie handed him.

His own tracks are likeable, but his greatest hits are the songs on which he was a session musician.

He brought the ‘twiddly bits’ (his words) to Cat Stevens’s Morning Has Broken, and the rococo flourishes to David Bowie’s Life On Mars?

When he plays them, you hear all the vocals in your head.

They could easily be mass singalongs, but Wakeman the pianist is too restrained to start one.