Comedian Ricky Gervais has reportedly bolstered his security detail to protect him against potential stage attackers after the stabbing of Salman Rushdie last week.

The Office and After Life creator is currently performing new material at Soho’s tiny Leicester Square Theatre, where members of the audience sit yards away from comics.

Mr Rushdie, 75, was stabbed up to 15 times by an American Islamist sympathetic to the Iranian government’s murder edict against the Satanic Verses author from 1989.

The 61-year-old Brit has attracted his fair share of detractors in the wake of controversial jokes in recent stand-up specials at the expense of transgender people. 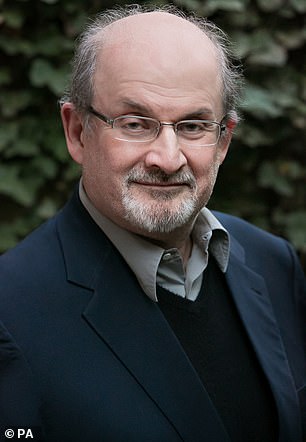 Rushdie (pictured in 2019) was attacked at a literary event in New York. He is expected to survive the attack

A source close to Gervais told The Sun: ‘Ricky isn’t taking any chances.

‘He has employed his own security guards for the gigs so he can have a laugh and relax in the knowledge that he’s safe.

‘He hasn’t wasted any expense. They’re the real deal and are positioned in the aisles and around the stage, keeping a close eye on audience members’

No glasses or bottles are being served in the venue to ensure his maximum security, the insider added.