Ricky Gervais has hit out at celebrities for whining about having to self-isolate while NHS staff risk their lives to battle Covid-19.

Mr Gervais, 58, said that once the coronavirus crisis is over he never wants to hear people ‘moaning about the welfare state’ or nurses again – and voiced his support for applauding healthcare workers on Thursday evenings.

The comedian’s comments come after a furore when singer Sam Smith, 27, broke down in tears on Instagram from self-isolation in a £12million house.

Last month Sam appeared to be crying after spending time inside the house amid the coronavirus pandemic.

On the set of his show After Life, his Netflix comedy about a man who loses his will to live following the death of his wife, Mr Gervais told The Sun: ‘[NHS staff] are doing 14-hour shifts and not complaining. Wearing masks, and being left with sores, after risking their own health and their families’ health selflessly.

‘But then I see someone complaining about being in a mansion with a swimming pool. And, you know, honestly, I just don’t want to hear it.’

He then added with a chuckle: ‘I didn’t go out much anyway, and there’s always too much booze in the house. It’s always been the 6pm watershed for as long as I remember. Obviously, I am looking at the watch.’

Sam Smith has previously faced the ire of Piers Morgan, 54, who blasted the singer for the ‘celebrity attention-seeking b******t’ during the coronavirus crisis.

Sam wore a pained expression and appeared to be struggling after spending time inside the house.

Mr Gervais, who is estimated to be worth more than £100million, revealed how he was born in Battle Hospital, Reading – as the fourth child of an immigrant labourer. 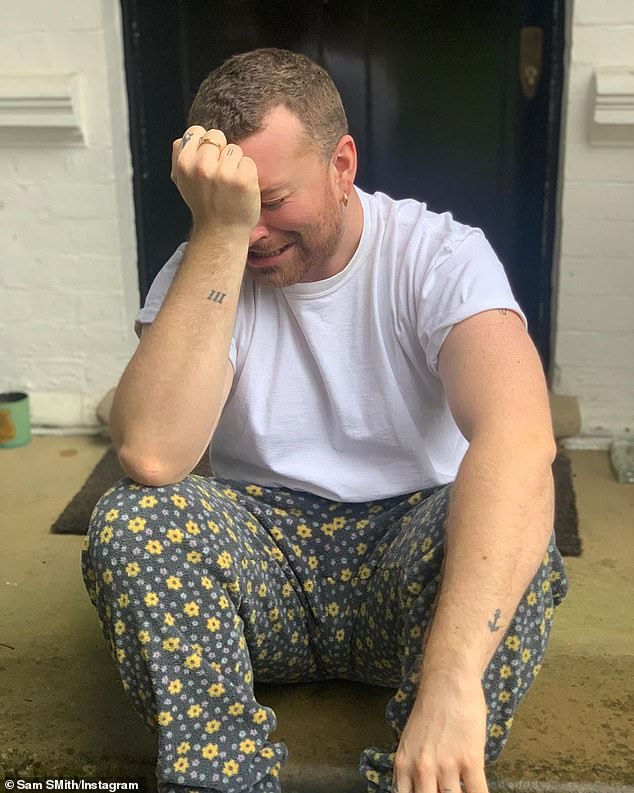 His father worked on construction sites until he was 70 years old, waking up at 5.30am every morning, he said , adding that ‘all the women’ in his family were ‘carers in some respect’, whose work never stopped.

Mr Gervais said that he had no money while he was growing up, but still ‘had everything’. His mother gardened, cooked, sewed, knitted, decorated and did ‘everything she could’.

He now lives in Hampstead, north London, with his partner Jane Fallon, 59.

Mr Gervais added that people ask him why he dresses ‘like a tramp’, and he responds that his clothes are clean and comfortable, and he is not trying to impress anyone.

Speaking about the new series of his dark comedy After Life, the comedian said that he was not willing to have the content watered down.

He said he is aware that criticism would most likely come his way for the programme, explaining that he is sometimes labelled a ‘controversial comedian’ but he takes that to mean he is simply an ‘honest comedian’.

Mr Gervais said he once did stand-up routine about nut allergies and one woman told him he should ‘never’ joke about such a topic.

He responded saying he had made jokes about the Holocaust and she chose to complain that he poked fun at food allergies.

She responded, ‘Yes, but the Holocaust didn’t kill children’, Mr Gervais said, adding: ‘Everything is up for grabs – it’s how we do it.’