Disgraced former AFL player manager Ricky Nixon has been charged with assault after an alleged attack on an audience member during a charity event.

Nixon, who was a top AFL agent before becoming embroiled in a shocking scandal with the ‘St Kilda Schoolgirl’ Kim Duthie, will front the Melbourne Magistrates’ Court next month over the alleged assault.

The incident comes as Nixon, 59, makes a bold bid to reclaim his former glory as the AFL’s top player agent 11 years after he was banned over the schoolgirl scandal.

Ricky Nixon (right) and former AFL great Dane Swan do regular speaking gigs together across Victoria. There is no suggestion Swan was involved in the alleged assault 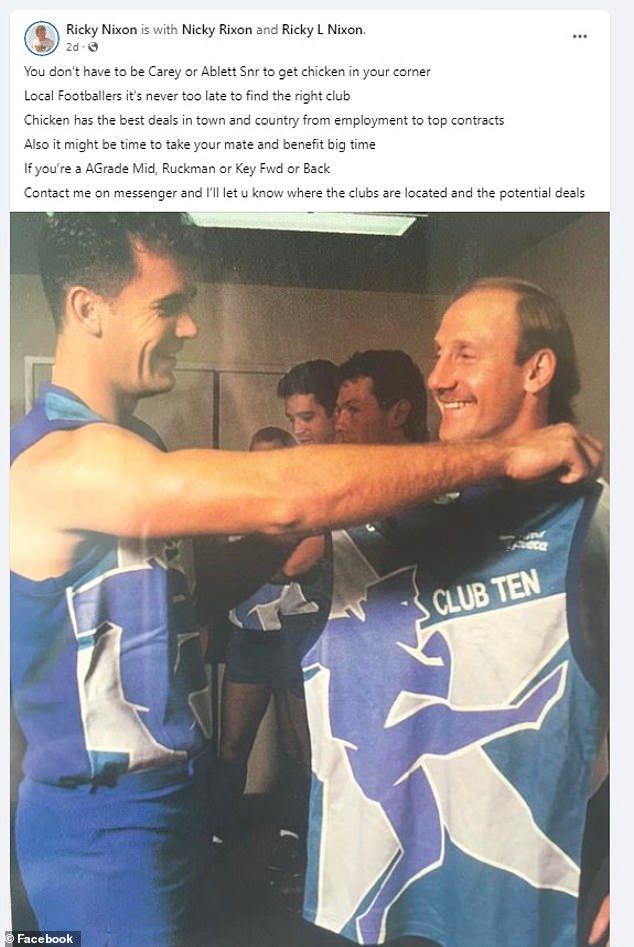 Ricky Nixon is actively back in the player manager field, offering ‘top contracts’ to those who contact him 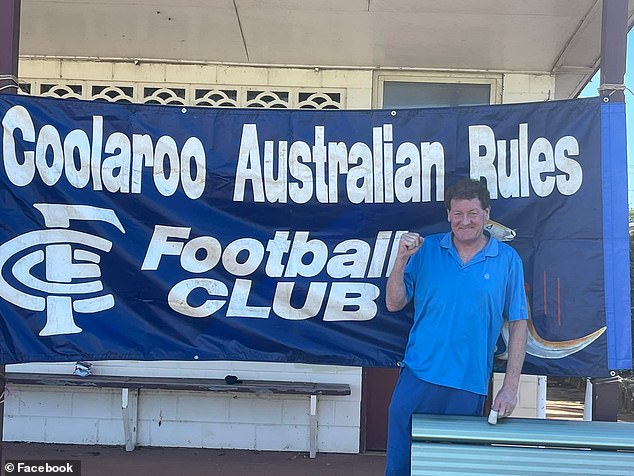 Nixon is accused of assaulting an audience member of one of his speaking gigs he undertook with Dane Swan. He is pictured here at another club 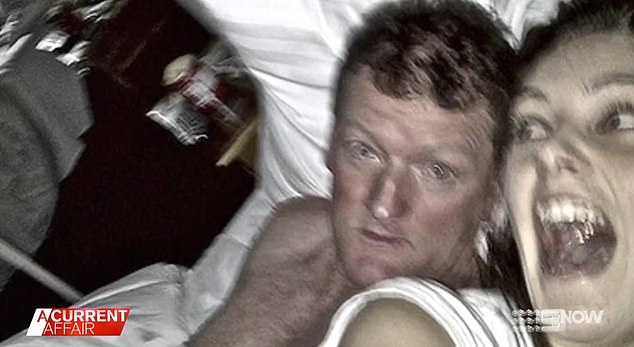 Ricky Nixon was caught on a hotel bed with school girl Kim Duthie in 2011 (pictured). The scandal put an end to his player manager career

AFL insiders have told Daily Mail Australia Nixon had been hosting a charity event with former Collingwood superstar Dane Swan at a footy club in Melbourne’s west when the incident within the venue’s toilets allegedly happened.

It was further claimed outgoing AFL boss Gill McLachlan has been in direct conversation with Nixon about welcoming him back as a player agent.

The source claimed Nixon had been keen on obtaining a large sponsorship from the AFL for his health business, but was also keen on throwing his name in the mix for the league’s recently vacated General Manager of Football role, which was previously filled by new Essendon coach Brad Scott.

‘He’s trying to get back in with the AFL. As an AFL player agent and the Brad Scott job,’ the source said.

Just weeks ago, Nixon’s girlfriend Melissa Huynh posted a cryptic photo of herself to her social media suggesting the couple may be experiencing troubled waters.

‘When you let go of toxic people, you create space for better people into your life,’ she wrote.

Neither Ms Huynh, Nixon or the AFL responded to Daily Mail Australia’s questions.

Nixon had managed 46 players before his shocking fall from grace, including then greats of the game Wayne Carey, Gary Ablett Snr and Ben Cousins – each of whom have suffered their own sad battles after leaving football.

He was one of the most high-profile men in sport when he was caught on a bed in his underwear in the hotel room of the St Kilda schoolgirl in 2011.

There were allegations Nixon did drugs and had sex with her at the Causeway 353 hotel in Melbourne’s CBD.

The schoolgirl said she did have sex with him and took a lie-detector test on the Sunday Night program, which found she was telling the truth.

But Nixon refuted the claims in his 2016 book and said while there’s no denying he was filmed on a hotel bed in his underpants, there was no proof in the video he was having sex or taking drugs. 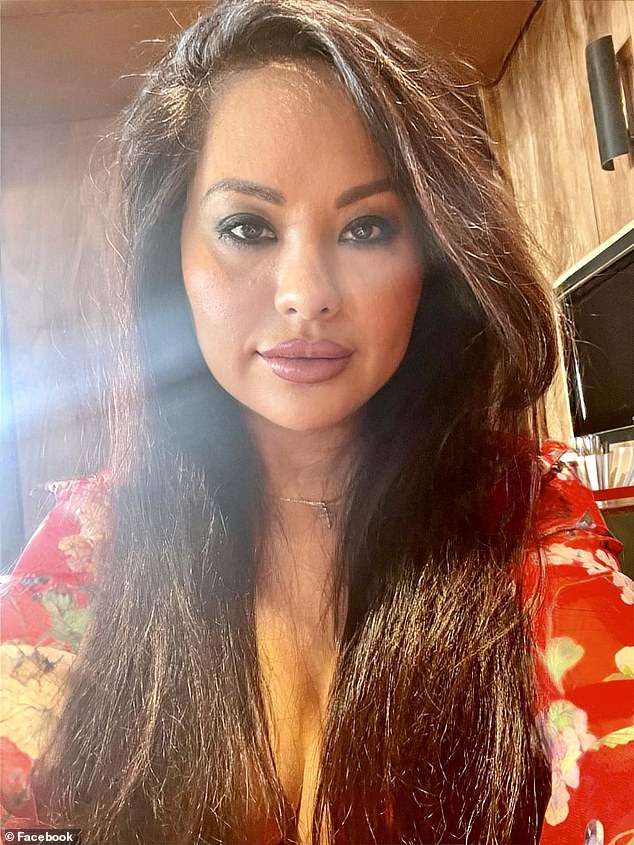 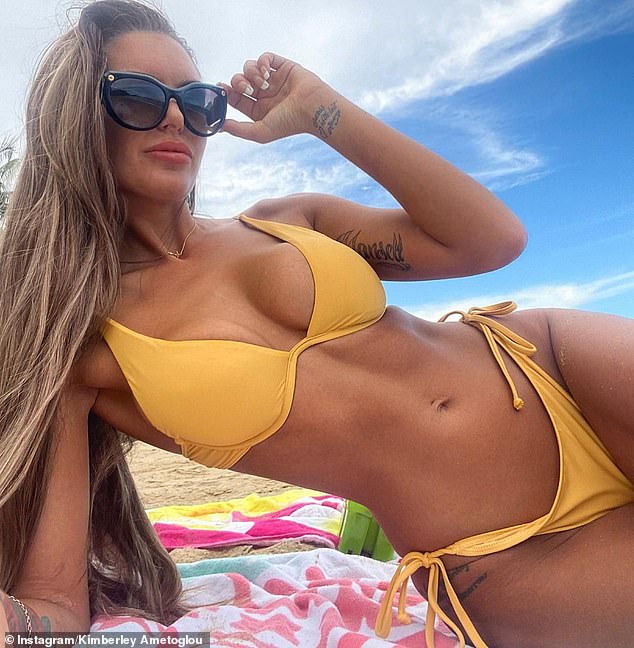 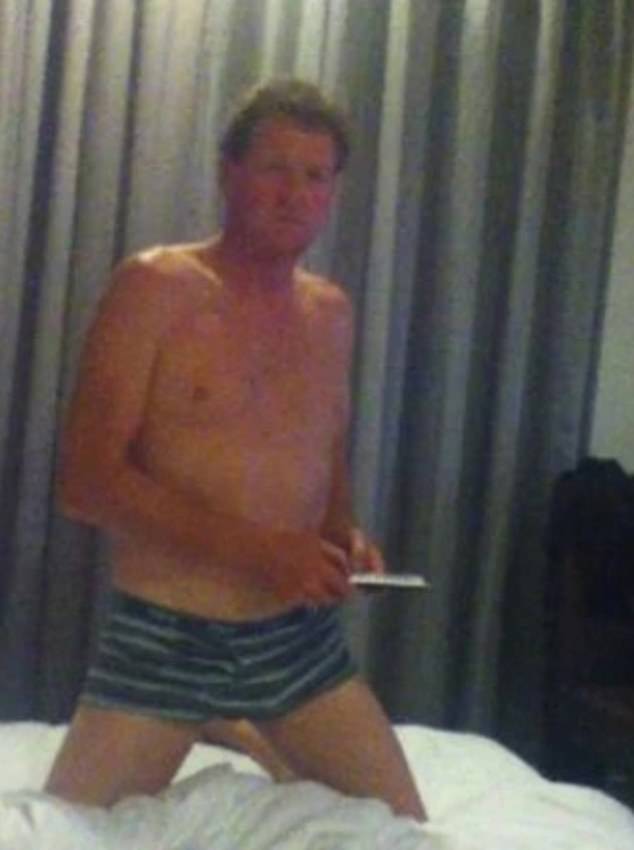 Ricky Nixon was caught with his pants down in 2011. He has never been too far away from controversy since 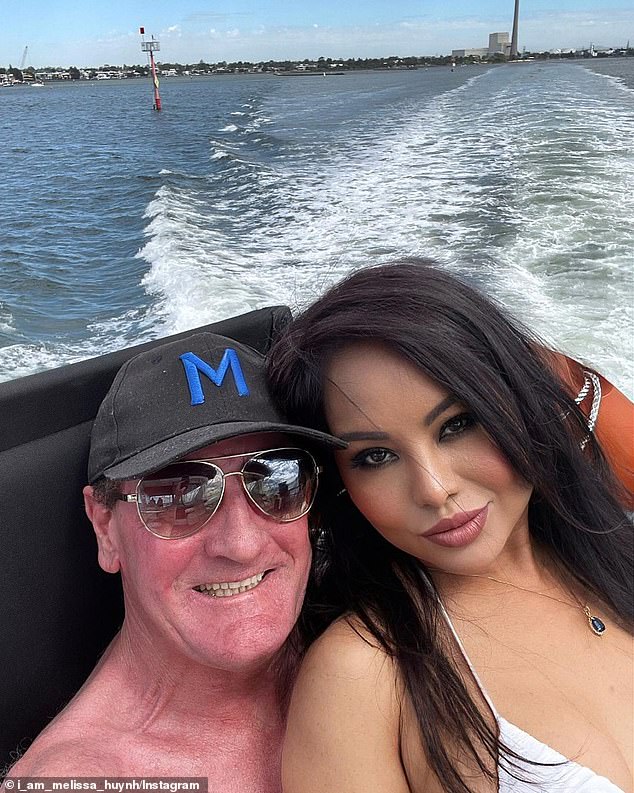 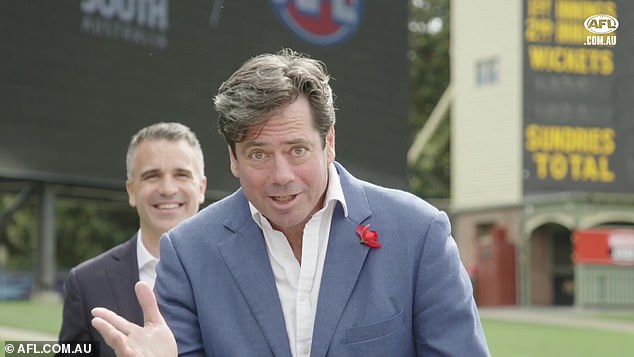 While Nixon has spent the past few years operating various health-focused initiatives, including controversial intravenous infusion treatments, he has again turned to actively spruiking his player management talents.

In a series of posts to his various social media profiles, Nixon is seen targetting talented young footballers across the country.

‘Wow have I got a deal for footballers,’ he boasted just last month.

Other posts promise players ‘huge offers’ to sign-up with clubs – although no mention is made of what cut, if anything, is on offer to Nixon.

Last weekend Nixon announced he was operating an online course teaching people how to become a sports agent.

Nixon told his followers he created the course back in 1998 when he was at the top of his game.

‘The course teaches you all the things Universities wish they had, It’s called first hand experience of starting from nothing in the back of my house in Kew pooing my pants that I’d left a secure Phys Ed teaching job & thinking how will I pay the mortgage. 5 years later I bought a $3M house in Kew,’ Nixon posted, accompanied by his juvenile catchcry ‘#ChickenGoesBANG’. 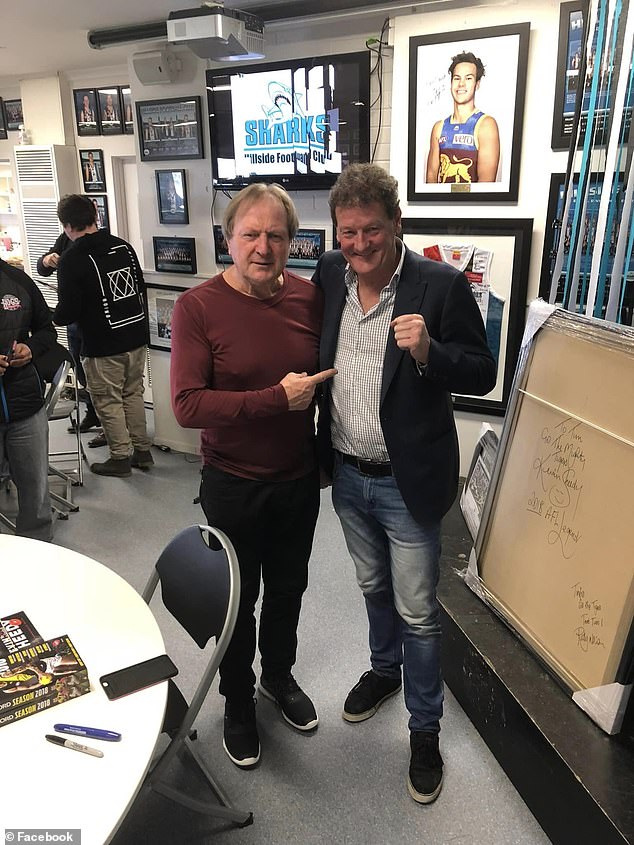 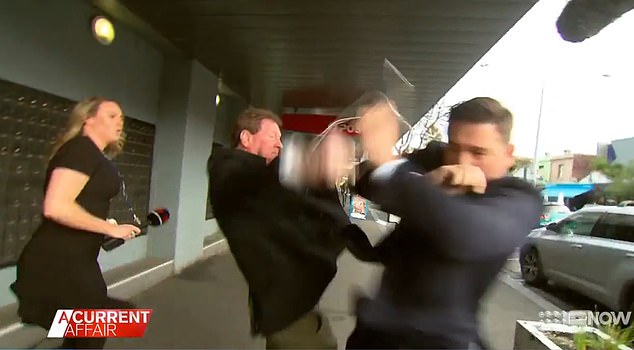 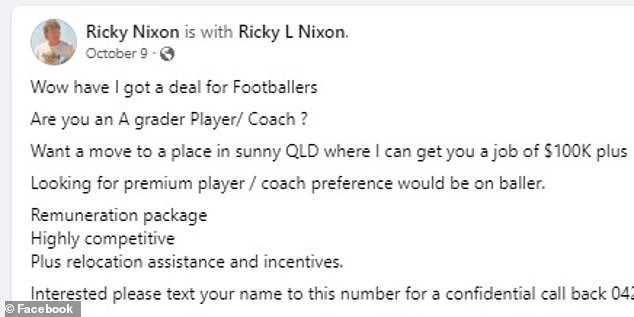 Ricky Nixon is back offering deals to young footballers

Nixon had opted not to appeal a two-year ban handed down by the AFL Players’ Association after the schoolgirl scandal.

While Nixon’s lawyers initially indicated the decision would be appealed, it was ultimately dumped as Nixon attempted to fade back into the shadows.

Since then, he has never been far away from controversy.

In September, Nixon was caught on camera elbowing A Current Affair’s Seb Costello in the head as he followed him down a Port Melbourne street asking questions.

While Costello reported the incident to police, Daily Mail Australia can reveal the reporter later withdrew his complaint to avoid further public confrontation with Nixon. 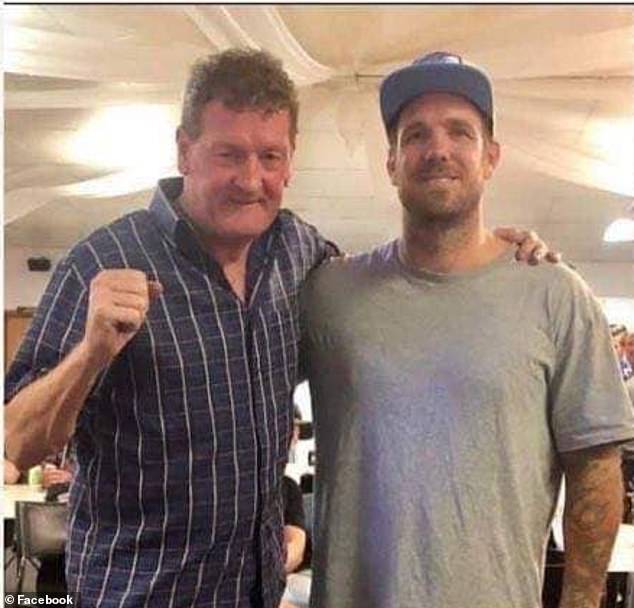 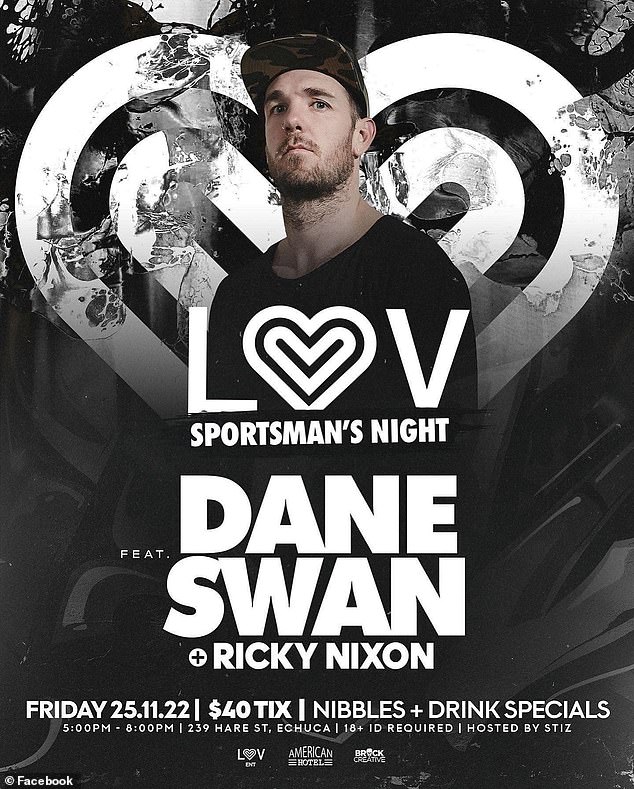 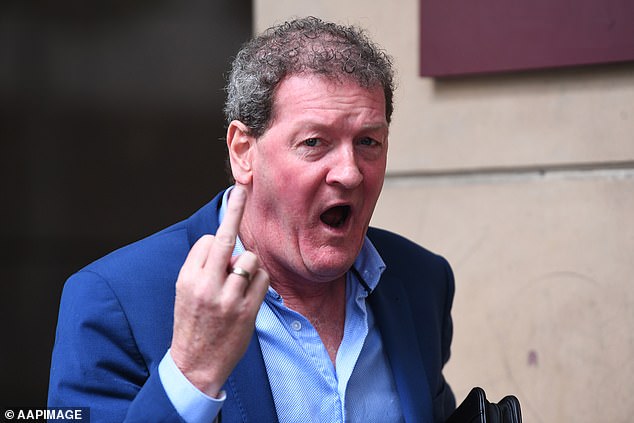 Ricky Nixon is seen arriving at the Melbourne Magistrates’ Court in 2018. He is set to reappear there next month

The former AFL player, who played for St Kilda and Hawthorn, has a history of run-ins with reporters.

In 2013 Nixon was leaving a Port Melbourne café when he tossed hot coffee over Nine News reporter Dougal Beatty.

It was the same year Nixon pleaded guilty to bashing his then partner Tegan Gould.

Magistrate Simon Garnett told Nixon he would have jailed him but for his lack of prior convictions for violence, his guilty plea, his charity work and his excellent prospects of rehabilitation.