The South East suffered the worst slowdown in property prices in the last three months as London’s chill ripples out into the commuter belt, new findings show.

Lower sales and prices in the capital are now affecting the surrounding area, but while values in the South East are in the doldrums, London’s housing market is showed slight glimpses of a recovery, according to the Royal Institution of Chartered Surveyors.

Its monthly report said the pace of price drops is diminishing somewhat in London, with agents reporting good properties, priced realistically were selling.

Slowing down: The South East suffered the worst slowdown in property prices in the country last month, new findings show

Over the next year, industry insiders expect the biggest regional property price hikes to emerge in Scotland, the North West and the West Midlands, the Royal Institution of Chartered Surveyors said.

London and the South East are the top two most expensive regions in the country, with house prices coming in at an average of £463,000 and £318,000, respectively, according to separate statistics from the ONS.

Anthony Webb, an estate agent at Trenchard Arlidge in Cobham, Surrey, said the part of the South East market he deals with were suffering, claiming: ‘Brexit uncertainty and excessive stamp duty are continuing to damage the property market.’

However, Jeff Doble, of London agent Dexters, said he had seen a ‘significant increase in market activity.’

Away from London, the property market is doing better, particularly in areas that had been suffering while the capital and commuter belt soared in recent years.

Hugh Evans, of agents Cavendish in Chester and North East Wales, said: ‘The confidence and demand has improved by some 10 per cent since the start of the year which is the opposite of the negative Londoncentric media’s view of the UK property market. 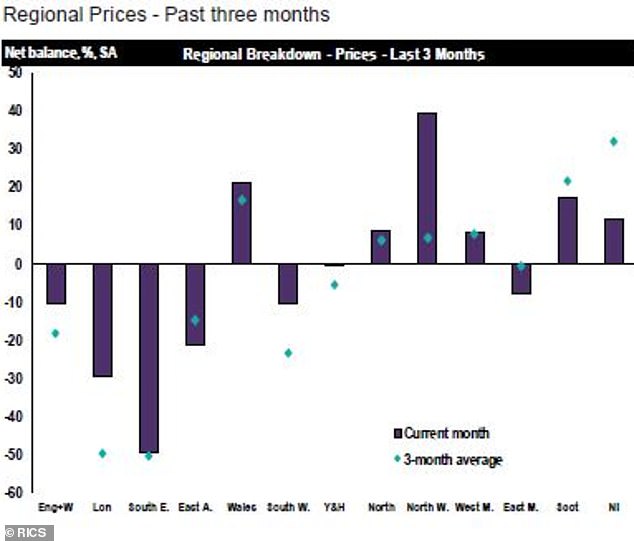 Variations: Regional house price fluctuations in the last three months, according to the Rics

The closely-watched survey from the Rics points to a ‘slightly more stable’ picture across the housing market than seen in previous months.

New buyer enquiries held steady in May, while the negative trend in agreed sales, new instructions and prices ‘diminished to a certain degree’, the Rics said.

The latest report from Rics, seen as a barometer of property sentiment, is the first one since July 2018 which has not reported a drop in buyer demand. 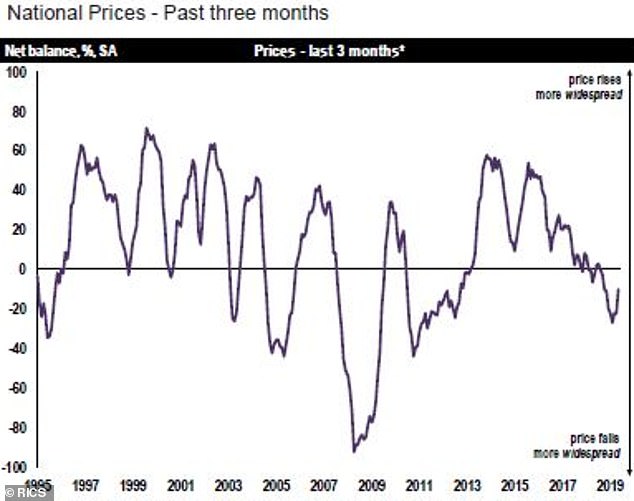 Shifts: Average property price shifts across the country, according to the Rics

Agreed sales continued to slip for a tenth successive month in May, with a net balance of -13 per cent of contributors noting a fall. But, this was still the best outcome since December last year.

On a regional level, transaction levels picked up modestly in Wales and the North of England last month, but the trend was either ‘flat or negative’ across all other parts of the country.

Simon Rubinsohn, RICS chief economist, said: ‘Some comfort can be drawn from the results of the latest RICS survey as it suggests that the housing market in aggregate may be steading.

‘However much of the anecdotal insight provided by respondents is still quite cautious, reflecting concerns about both the underlying political and economic climate.

‘Another significant point made by respondents is that there continues to be considerable emphasis on the need for realistic pricing on the part of vendors, which while not a new story, is indicative of the ongoing challenges.’

Looking ahead, property sales are expected to fall over the next three months, but pick up slightly as the year rolls on.

Meanwhile, with the exception of London, prices are expected to rise throughout the rest of the year, the Rics said.

Brian Murphy, head of lending for Mortgage Advice Bureau, said: ‘Whilst today’s report might spark a degree of excitement in some quarters of the industry, we also know that consumer sentiment can quickly change so until such times as we’ve seen a consistent trendline it wouldn’t be wise to suggest that this is the pivotal turning point for the market this year.

‘That said, it’s possible to also suggest that once a new Prime Minster is installed in Downing Street and more clarity is achieved around Brexit, the longer term forecast from RICS of a modest overall upturn in values may well turn out to be the case.

‘In the meantime, the existing market fundamentals will hopefully mean that the current stable conditions continue.’

Tenant demand on the up as landlord queries drop 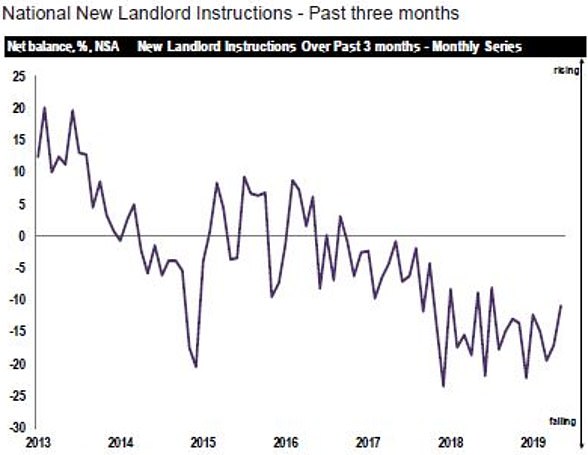 In the lettings market, tenant demand increased slightly for a fifth month in a row in May, Rics said.

At the same time, the number of instructions from landlords fell, as it has done for much of the last three years.

Given this imbalance, near term rental expectations are now more elevated than at any other point since May 2016, with rents seen rising across all regions of the UK.

‘This could also be partly to do with changes in the rental market with regard to fees, but that remains to be seen’, the Rics said.

Mr Rubinsohn said: ‘The lettings numbers are a source for some concern with rental expectations beginning to accelerate.

‘It remains to be seen whether the pick-up indicated in our data materialises but the deterioration in the net return for landlords certainly provides a reason why, as it is a possible outcome of recent changes in the tax treatment of buy to let investments.’

In what has been hailed as a major victory for the country’s 4.7million rented households, the ‘Tenant Fees Act’ outlaws additional charges when a tenant signs up for a new property or renews a contract.

These charges can range from arranging a viewing on a property to carrying out a reference check or renewing a contract, and typically add an extra £300 onto the cost of moving.