Riddle of the death plunge model.

The story had it all: sex, drugs and a stunning teenage model who plunged, naked, 14 floors to her death from the home of an American cryptocurrency tycoon and his glamorous wife in the booming Malaysian capital, Kuala Lumpur. As news of the violent end of Ivana Smit, 18, flashed around the world, it grew in the telling, spawning claims the Dutch citizen had been murdered, and that her killers were being protected by corrupt police.

Adding fuel to the fire was a British former policeman and TV celebrity, Mark Williams-Thomas, who made the 2012 TV documentary which exposed the crimes of Jimmy Savile. Working with UK lawyer David Wells, he travelled to KL and compiled – at a cost of £8,000 – an unofficial report for Ivana’s family. Last week Wells issued a press release, headlined: ‘Model’s fatal fall was no accident, conclude St Albans solicitor and private investigator duo.’ They say they have ‘no doubt’ that in Britain, Ivana’s death would be treated as homicide.

But was it? Absent from every account so far of Ivana’s death on December 7 is a single word from the last people who saw her alive, and from whose 20th floor balcony she plunged: Alex Johnson, 44, and his Kazakh wife, Luna, 31. Last week, they gave their first interview to The Mail on Sunday. 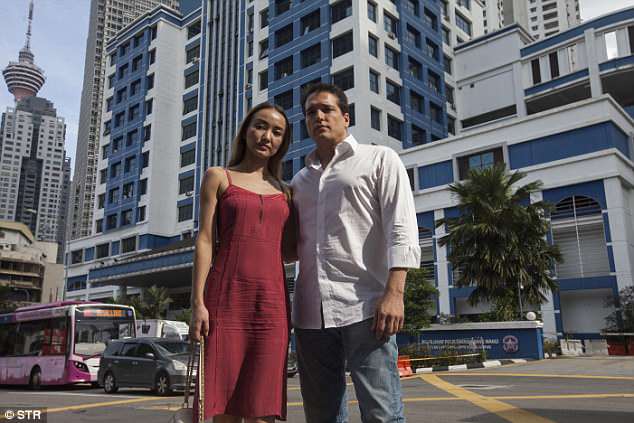 ‘This case is an object lesson in how false claims and fake news can come close to destroying people,’ Alex claims. He showed the MoS the numerous death threats he has received since the murder claim was publicised, and describes a chilling attempt to kidnap the couple’s daughter, aged five: ‘A man phoned our nanny, Maha, saying he was Luna’s father and would be picking her up from school. Luna’s father died before she was born.

‘We never intended to make the details of our marriage public. Now we fear our own lives are in danger, and we have no choice.’

Ivana first met Alex and Luna last Halloween at Prime, a nightclub in KL. Alex had been working with cryptocurrency firm Everus since early 2017, and living in KL for a decade. He met Luna, a lawyer’s daughter who works in education, in 2010. 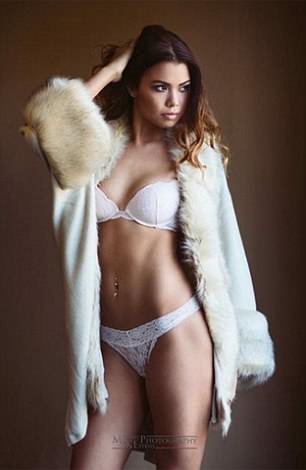 Ivana Smit, pictured, plunged to her death on December 7 in Kuala Lumpur. Her family have hired investigators to look into the incident

Ivana’s life had been less settled. When she was three, her parents, Karen and Marcel, sent her from Holland to live with her grandparents Hendrik and Susan Smit in Penang, 180 miles north of KL. The family spokesman, Ivana’s uncle Fred Weinhold, says they were ‘working 24 hours a day’ on Marcel’s second-hand car business, and so the arrangement made sense.

When Ivana turned 13, Weinhold says, she returned to her parents, now living in Limburg, Belgium, and enrolled in a local school. But unhappy there, she was soon back in Malaysia. At 16, she went to Belgium again, this time for two years. According to Weinhold, she ‘tried to become a European. She had a Belgian boyfriend, and moved in with him’.

Tall and beautiful, she reached the last round of TV show Belgium’s Top Model: ‘But it didn’t work out with the boyfriend and she went to Malaysia again. She promised she would be in Belgium for the contest final. She came back in a casket.’ When Ivana met the Johnsons, she had been back in Malaysia for just two days.

Weinhold and Ivana’s friends agree she behaved like someone much older than her years. ‘She thought she had wisdom. But really, she was naive,’ Weinhold says.

According to hotelier Robert Khoo, who knew her for several years, she liked to party: ‘She had to slow down but she never did. She was wild, having fun without being aware of the dangers.’

At Prime, Luna says, Ivana was introduced to the Johnsons by a mutual acquaintance. ‘She asked me to stand up and dance with her,’ Luna says. ‘We weren’t kissing, but we were doing sexy moves.’ Luna is bisexual. The Johnsons have what they term a ‘progressive’ marriage, and had enjoyed previous ‘three-way’ flings. Alex says: ‘I could see what was happening. Then Ivana said, “Your wife is awesome.” She was quite bold.’ Luna adds: ‘She was beautiful, charming, confident. I was already melting.’

The Johnsons say earlier relationships of this kind had been brief, but with Ivana, the involvement was closer. They showed the MoS a WhatsApp group the three set up on their phones, which contains much explicit flirting. But Luna says: ‘We had a real connection. When we sat down to talk, I felt I’d known her for ever. She said she was 26. I didn’t question her age.’

On November 4, the Johnsons arranged overnight babysitting, and they say the trio spent the night at the Concorde Hotel. It seemed to go well. ‘Hey sexy what are u doing?’ Ivana texted Luna the next day, ‘Thanks for last night.’ ‘Hey love, thank u,’ Luna replied. ‘Hoping to catch up again soon.’

Meanwhile, Ivana was staying with friends and getting jobs – not just photoshoots, but paid ‘models night’ appearances at KL clubs. On December 6 she went to a models night at Mantra, a penthouse club with a dramatic view of the city. Her agent, who asked not to be named, was there too and claims: ‘At first she was OK, but she was looking for drugs. She wanted ecstasy.’

They left together and moved on to 9 Club, where patrons rent private rooms. There, says Alex, they continued to drink heavily.

Later, Mark Williams-Thomas would make much of the fact that when they left 9 Club at 5.22am, CCTV shows Alex carrying Ivana. However, by the time they got back to the Johnsons’ block, Capsquare Residence, its cameras caught her walking normally into the building and out of the lift towards the Johnsons’ flat.

It was 5.44am. The Johnsons’ daughter – whom the MoS has agreed not to name – was asleep. Her babysitter went home, and Luna says she and Ivana sat on the sofa, drinking cider. Ivana phoned her new boyfriend, Lukas Kramer, saying she was ‘with my girlfriend at her place’, and at 7.24am, sent him a selfie, texting she was ‘chilling’.

The Johnsons’ daughter got up and Luna says she and Ivana had breakfast with her. Luna says: ‘Ivana was hammered. I kept talking to her as I got my daughter ready for school. Ivana lay down while I took her there.’

‘Alex and Ivana were on our bed. She was awake, he was asleep. I came over and said, “Ok, now I’m free.” We sat on the sofa and after 20 minutes she put on some music and took off all her clothes. So we went into the bedroom and were intimate.’

Luna says that afterwards, she lay down with her husband in the bedroom and came out into the lounge about 10am to find Ivana ‘wandering around, talking to herself and giggling. I was so tired after all this partying. At 10.15 I went back to the bedroom. When my head hit the pillow, I passed out’. 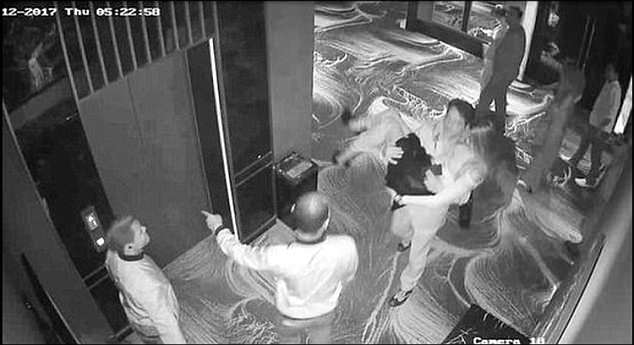 CCTV footage from Club 9 shows Alex Johnson carrying Ms Smit at 5.22am on the day she died which some claims shows the model was ‘too intoxicated’ to walk on her own

Luna says she woke at 1.25pm and saw that Ivana’s clothes, shoes, bag and phones were in the lounge/kitchen, but that she had vanished. ‘I thought maybe she had borrowed some of my clothes and gone to a photoshoot she’d mentioned.’ She drifted off to sleep again.

Then, at 5pm, Luna and Alex were woken by the police.

The parapet on the Johnsons’ balcony is just 3ft high. Beyond lies a narrow shelf with two air-conditioning units, and then, in full view of the street and nearby buildings, the vertiginous abyss.

Hours earlier – exactly when remains unknown – Ivana had plummeted on to a plastic awning above the jutting sixth floor terrace, collapsing it on impact. The alarm was raised at 2.20pm, when a technician entered the sixth floor flat. The MoS has seen a photo of her body, lying very close to the side of the building. Her arms are bent at the elbows. Her expression looks peaceful.

The Johnsons were arrested, and while the daughter went to live with her nanny, they spent two weeks in custody, suspected of drug use and breaching immigration rules. They were released without charge. Blood tests showed no trace of drugs, and their visas were in order. However, a post-mortem showed Ivana had taken cocaine and alcohol, and had high levels of PMMA – an amphetamine sometimes sold as ecstasy.

Police were swift to announce Ivana’s death was an accident. Her family travelled to KL and, after they protested, the police apologised and opened a second inquiry. Ivana’s uncle Weinhold says that, last month, the Dutch ambassador was told this too had been closed. 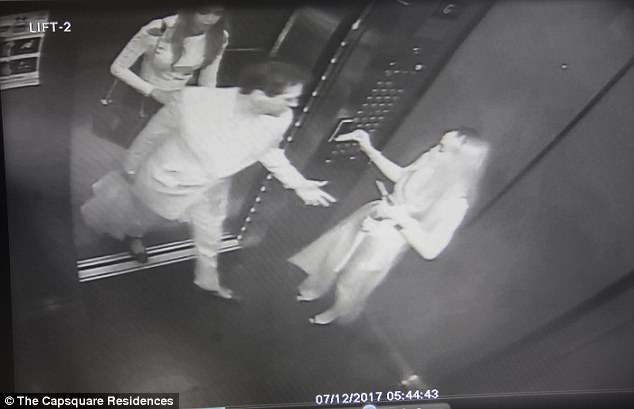 However, 20 minutes later at 5.44am CCTV footage from the Johnson’s apartment complex shows Ms Smit walking into the lift along with the couple

Police would not discuss the case with the MoS, saying only that there will be an inquest. But it seems the second investigation has also concluded that Ivana’s death was accidental.

Her body was frozen and taken to Holland, where pathologist Frank van de Goot performed a second post-mortem. His findings caused a furore. The lack of bleeding from the injuries caused by her fall suggested she died almost instantly, he said. However, there was recent bruising on her upper arms, and a further 8cm bruise on the back of her head, both sustained some time before her fall.

Some have taken this as evidence of a violent struggle before Ivana fell, a claim supported by allegations that neighbours heard ‘screams’ from the Johnsons’ apartment. But when the MoS interviewed building manager Vanessa Nayar, she said: ‘There were no reports of any trouble or noise.’

Rosalina Ismail, who spent the morning in the adjoining flat, added: ‘I heard nothing. We were unaware of anything until we read about Ivana’s death in the paper.’

Nevertheless, the evidence of prior bruising was enough to persuade Mark Williams-Thomas and David Wells – who declined to respond to requests for comment – to suggest in their report that Ivana may have been ‘dead or unconscious before she went over the balcony’, so that ‘this case should be treated as a homicide’.

But is the evidence so clear-cut? Dr van de Goot told the MoS: ‘I can’t exclude the possibility there was violence. But I can’t say whether the head injury caused unconsciousness, and it may have been a simple fall. It’s in a very likely place to get an injury if you fall backwards and hit the ground.

‘The pinpoint bruises on her arms could have been caused if she fell, and was then helped up.’

Moreover, ‘substances in her blood’ would have had a ‘certain influence’. Tests revealed she had been using cocaine for some time.

According to the Johnsons, there were footprints on the balcony and on to the top of the air-conditioning units. Could Ivana have dropped something on to the shelf, and then, highly intoxicated, gone close to the edge trying to retrieve it and lost her balance?

Perhaps we will never know. Meanwhile, those who were close to Ivana try to deal with the tragedy. ‘She loved life, she had so many plans, so much success,’ says Weinhold. ‘She was no longer a kid, but our love for her stayed the same.’

Luna says: ‘When I talk about her death, my hands are shaking, I have a pain in my heart. I feel so sad. It’s awful. But because I have been fighting to prove my innocence, I haven’t been able to grieve.’