A furry festival in the midwest has banned right-wing provocateur Milo Yiannopoulos, 34, from attending the convention.

Furry events are held by a group of people who gather to celebrate anthropomorphizing animals with attendees often dressing up in full-body animal costumes.

‘Hate is not welcome at Midwest FurFest. We are dedicated to providing a safe, harassment-free convention experience for all, regardless of age, race, gender, gender identity or expression, sexual orientation, disability, physical appearance, or personal beliefs,’ organizers wrote in statement. 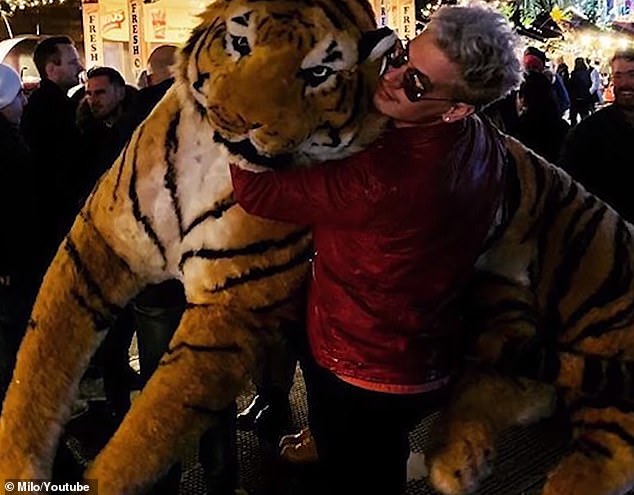 ‘The board of Midwest Furry Fandom, consistent with our posted code of conduct, has rescinded Mr. Yiannopoulos’s registration. He is not welcome to attend this or any future Midwest FurFest event.’

Organizers found out Yiannopoulos was attending after he announced it on his Telegram messaging channel – one of the few social media platforms that still allow him, after he was banned for life from Twitter.

He shared a picture of his $300 ticket to the December event which noted he was going in a snow leopard costumer.

Yiannopoulos also claimed on Telegram that he had submitted a form to suggest he host a panel called ‘The Politics of Fur.’

He asked his followers who plan to attend Midwest FurFest to message him to arrange ‘dinner, drinks, photos or anything else.’ 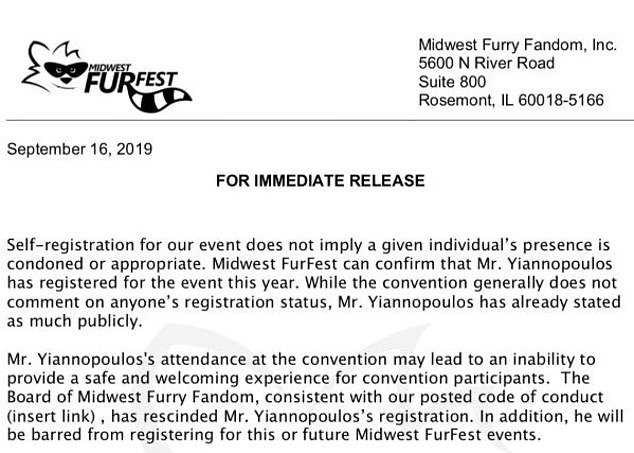 The organizers of the Midwest Furfest have rescinded his event registration 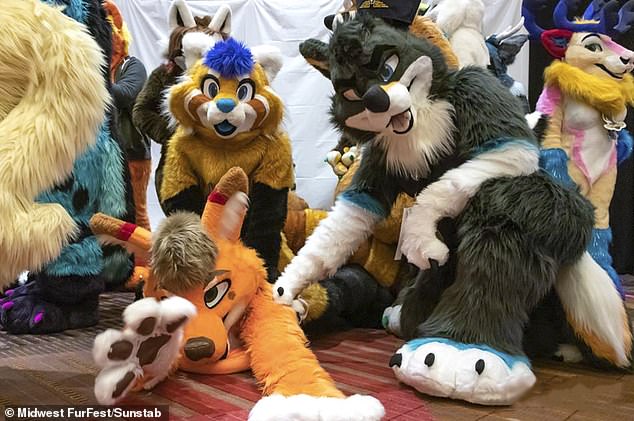 ‘Furries’ as they’re often called, are groups of people who have interest in animal personas with human characteristics 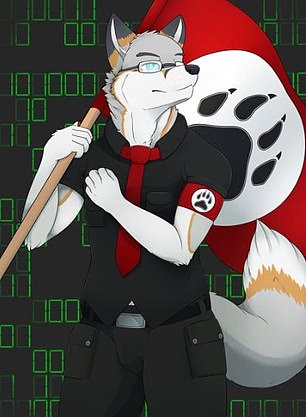 Some sub-communities such as the Furry Raiders warmly welcomed Yiannopoulos. The group’s logo is a thinly veiled nod to Nazi imagery

Furfest received numerous complaints online as a result of his admission and the organizers finally made the decision to cancel his tickets.

While Yiannopoulos’ possible attendance sparked mass disapproval within the furry community, some sub-communities such as the Furry Raiders warmly welcomed Yiannopoulos.

According to their website, the Furry Raiders are ‘committed to upholding the values of free speech and expression within the furry community.’

It’s not the first time a furry convention has had a connection with neo-Nazis.

In 2017, Fur Con to be held in Denver, had to be entirely cancelled after a group of far-right furries known as Furry Raiders reserved a block of hotel rooms at the event according to The Daily Beast.

Yiannopoulos, meanwhile, has long caused controversy with his outspoken far-right views with speeches on university campuses in the US sparking violent protests.

He was banned from Twitter in 2016 year after being blamed for a barrage of racist abuse directed by his fans toward Ghostbusters star Leslie Jones.

He has previously likened feminism to cancer, Islam to AIDS and has spoken out against gay rights and the Black Lives Matter movement – despite being openly homosexual and married to an African American man.

Yiannopoulos lost a book deal after a video emerged in 2017 in which he said some relationships between older men and teenage boys could be beneficial.