Rightmove records its busiest EVER day with six million visits

Britain’s largest property website had its busiest ever day last week as millions of Britons stuck inside by the coronavirus lockdown look to swap city living for a move to the coast or countryside.

Rightmove recorded more than six million visits on Wednesday, an increase of 18 per cent compared to last year and the highest number since it launched in 2000.

And last Saturday was also a record day for the amount of time would-be buyers spent browsing the site, after at least 400,000 property transactions were being put on hold during the lockdown.

The biggest jump in buyer interest compared to last year was seen in Canterbury, Kent, while coastal areas of Cornwall, Devon and Dorset were also popular.

A range of stunning seaside properties in those areas are available for £1million – as well as an eight-bedroom house in Whitby, North Yorkshire – the same price as a one-bedroom flat in the most central parts of London.

One Hampshire-based estate agent said the level of interest has been ‘crazy’, with some buyers even chartering helicopters to ensure they stick to social distancing rules. 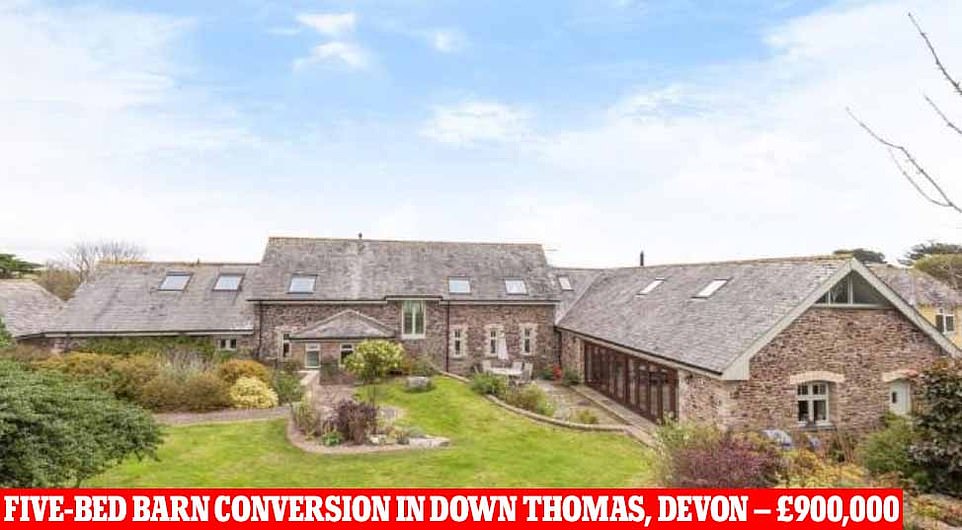 This beautiful five-bedroom converted barn in Down Thomas, near Plymouth in Devon, is on the market for £900,000 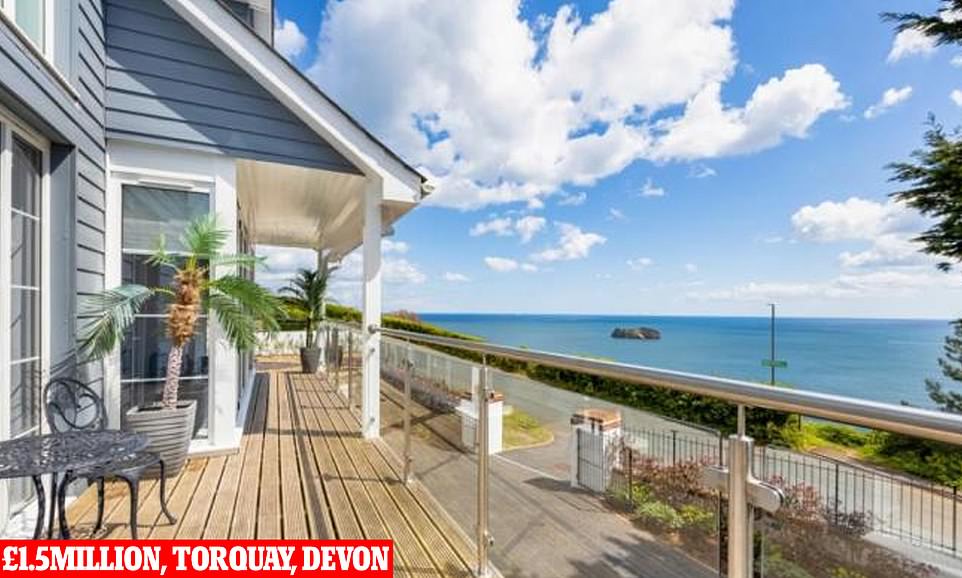 This five-bedroom detached house is for sale in Torquay, Devon, for £1.5million with uninterrupted sunrise views 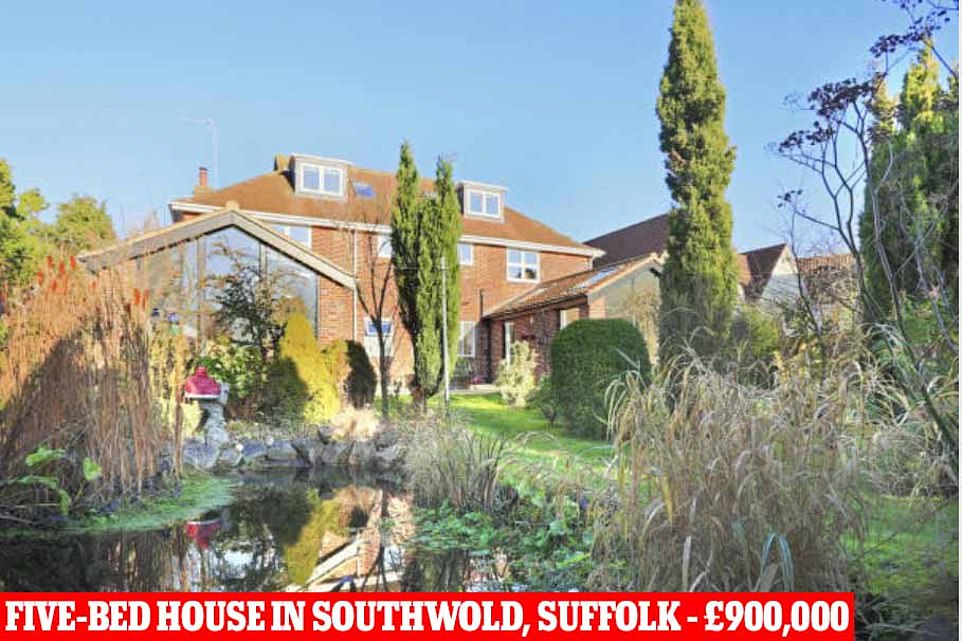 An expansive five-bedroom detached house on the Suffolk coast at Southwold is on the market for £900,000 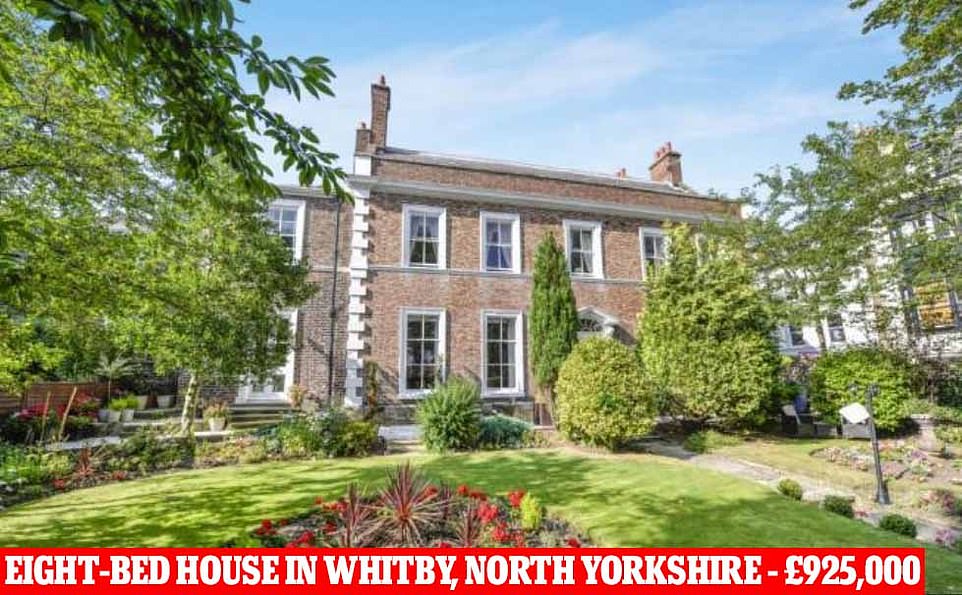 A huge eight-bedroom end-of-terrace house in the North Yorkshire seaside town of Whitby is on sale for £925,000 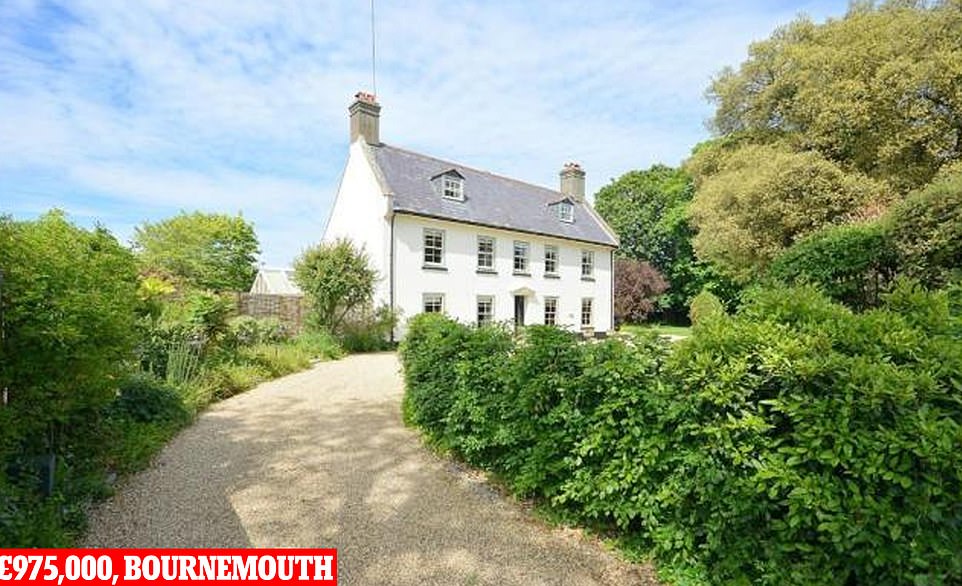 Bournemouth, in Dorset, is proving a popular loctation for post-lockdown buyers. This six-bed house is on sale for £975,000

It was closed in March as part of lockdown measures to try to stop the spread of coronavirus.

Biggest jumps in buyer interest since last year – by postcode

At least 400,000 property transactions were put on hold during the lockdown, according to property website Zoopla.

The sales, coming to around £82billion, would have been completed between April and June.

Although sales agreed by letting agents are 47 per cent down on last year, that marks a huge improvement from what was a figure of 90 per cent when the market was suspended.

More than a quarter of people (28 per cent) who had not planned to move before lockdown are now entering the market, Rightmove said.

‘Areas with beautiful scenery and a potentially quieter life are proving to be popular as home-movers’ priorities start to shift and outside space becomes more important.

‘There are also those considering a move further out now that they’ve realised they can work out of the office and may be finding they can get more for their money in some of the South West and Northern locations.’

Estate agents also gave their views on the explosion of interest, with one even saying some buyers had chartered helicopters to adhere to social distancing measures.

Blair Stewart, a consultant at Strutt & Parker in Hampshire, said: ‘The last two weeks have been incredibly busy – it’s crazy.

‘From £300k up to £3m plus, the interest in the South West is off the charts. Much interest has been from London but we’ve also had interest from Yorkshire and further afield with interested parties even chartering helicopters to make socially distanced viewing possible.’ 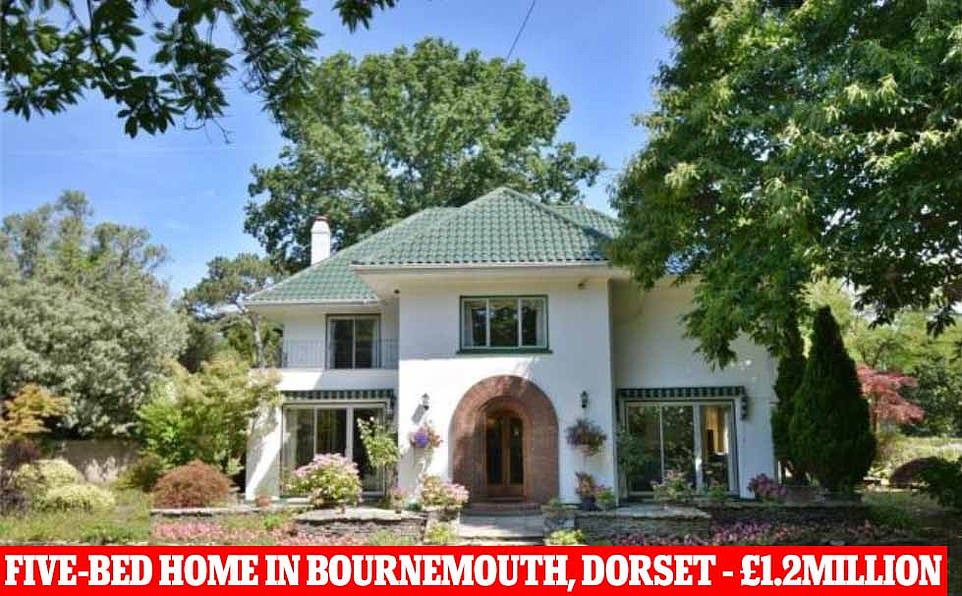 A five-bedroom detached house for sale over three floors near the Dorset market town of Bridport for £1.2million 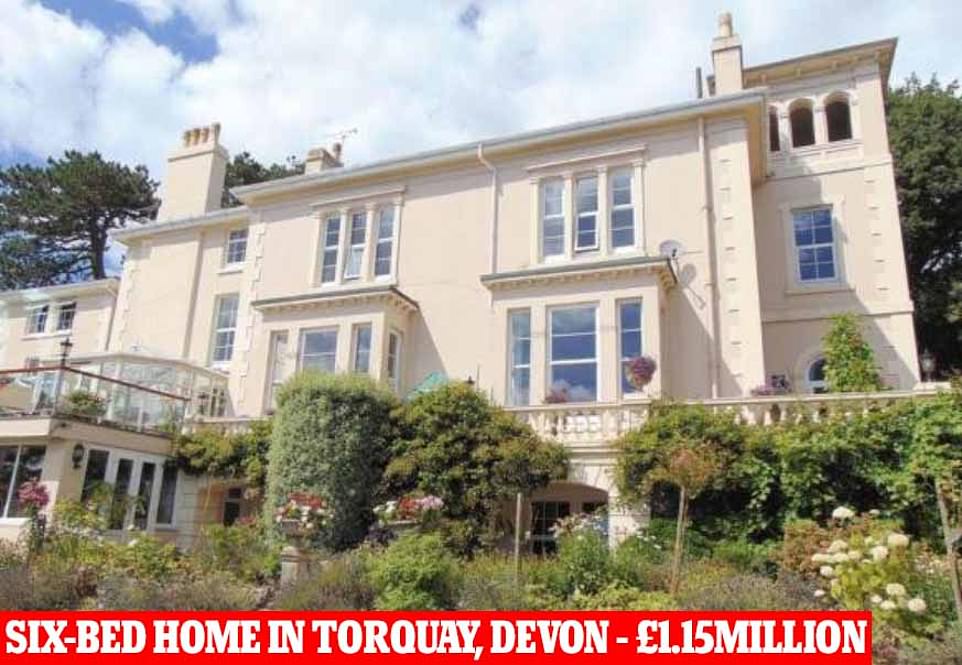 This six-bedroom Victorian villa with stunning views in the Devon town of Torquay is available for £1.15million 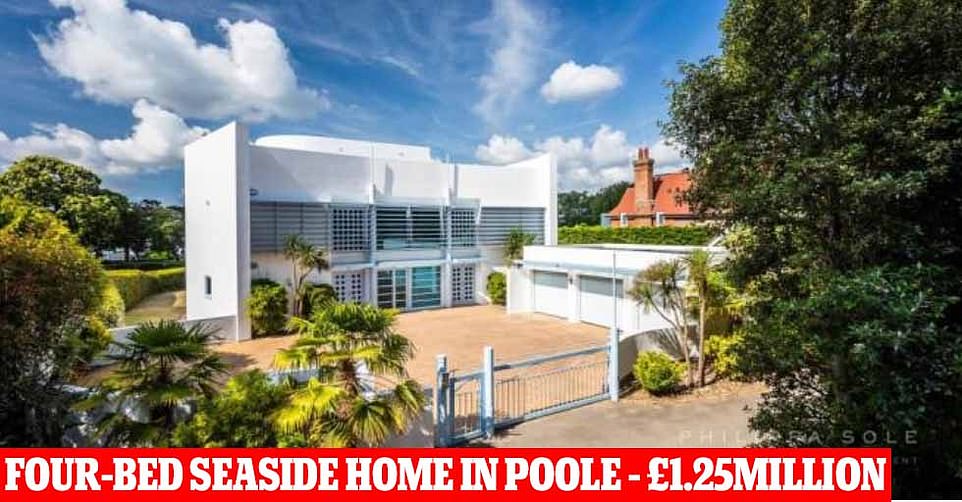 This modern property in Poole, Dorset, comes with four double bedrooms and harbour views for £1.25million 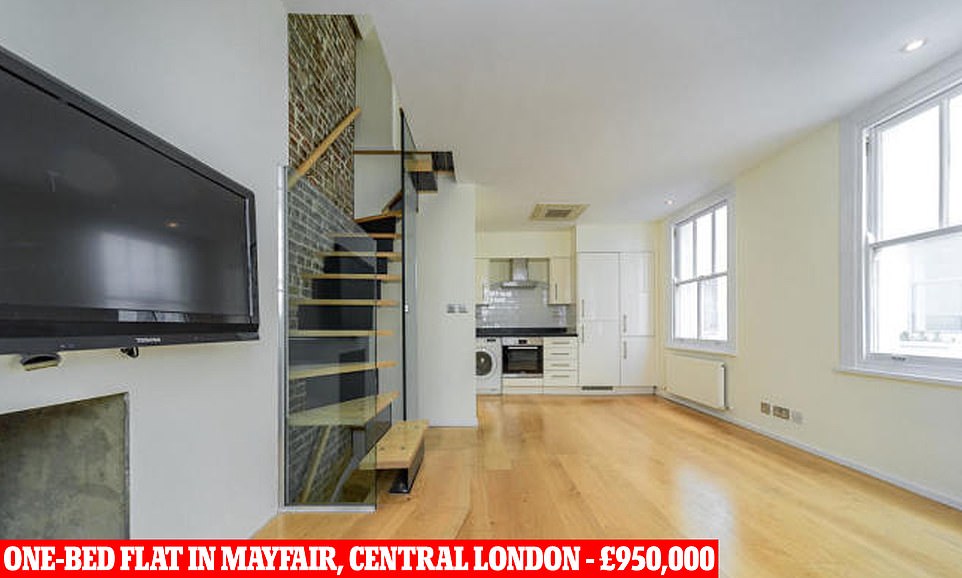 This is what you can get for the price of a stunning seaside home outside the South East of England – a one-bedroom flat in London’s Mayfair for £950,000 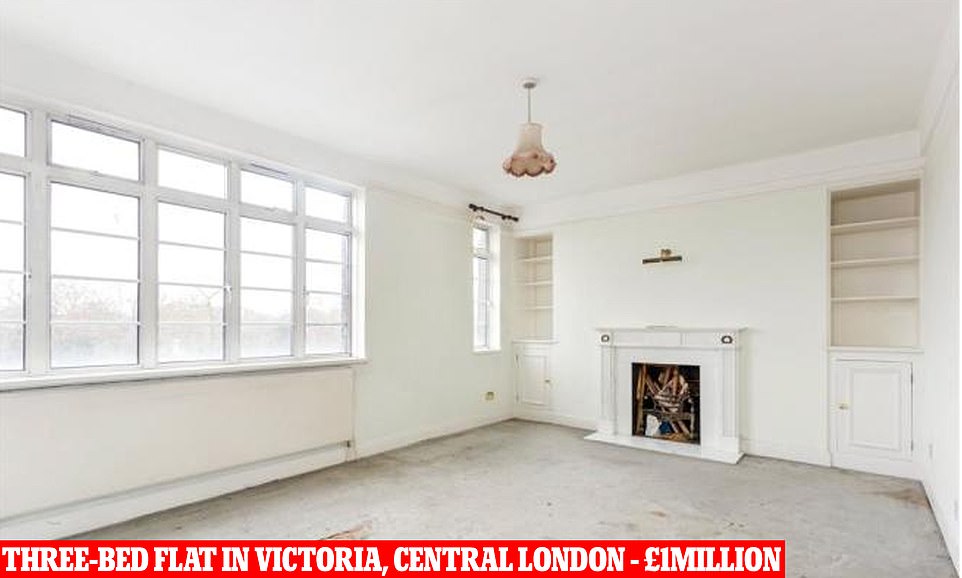 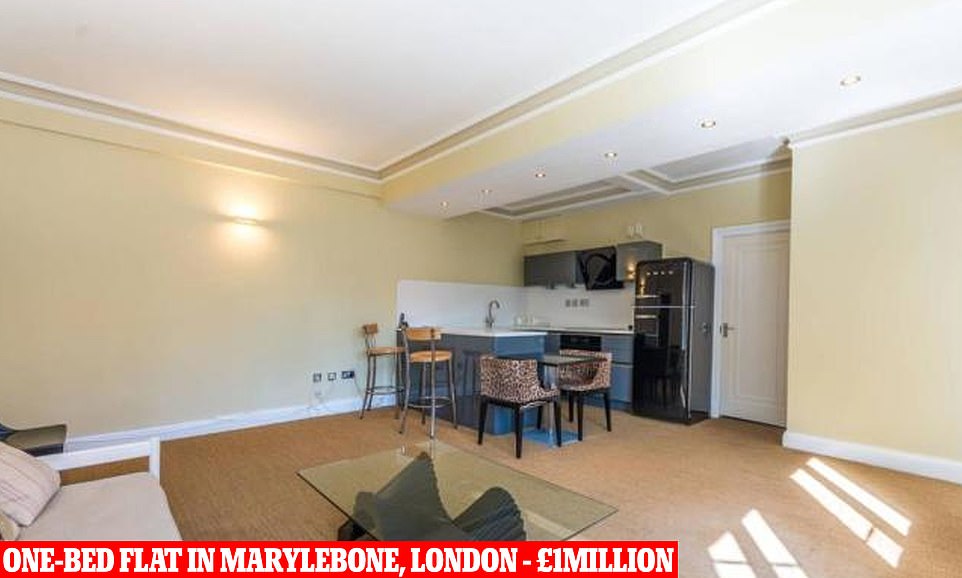 Mr Stewart added that people who would have been looking at buying homes abroad have shifted their focus to the UK because of travel restrictions.

Holiday homes in Cornwall have seen a spike in interest, he added.

Andrew McKnight, the owner of Cornwall-based MAP Estate Agents, said all their staff have been recalled to cope with the level of demand.

He added that social distancing measures in place for viewings have added to the workload. 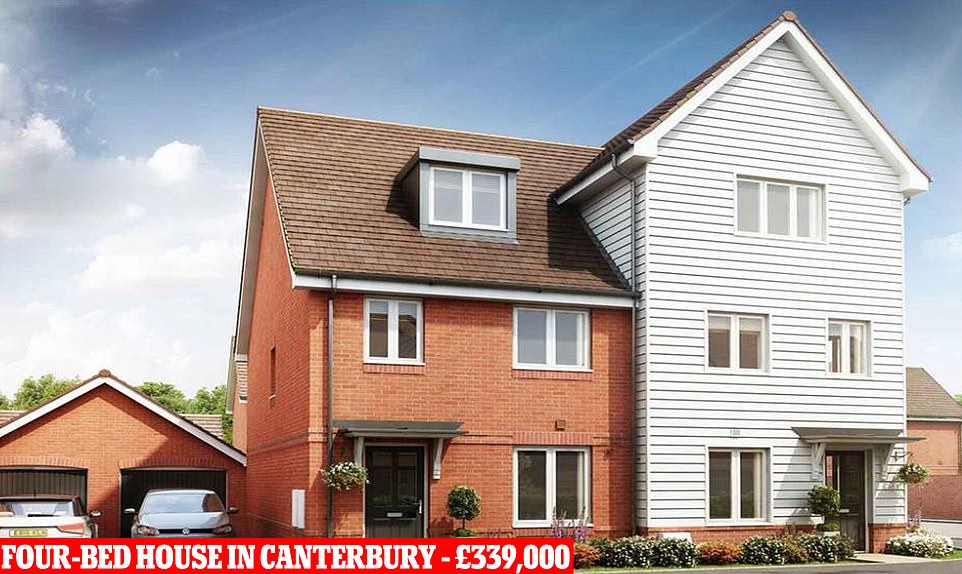 The average house price in Canterbury is around £330,000. A little more than that (£339,000) will buy you a new three-bed home complete with garage and neat front garden 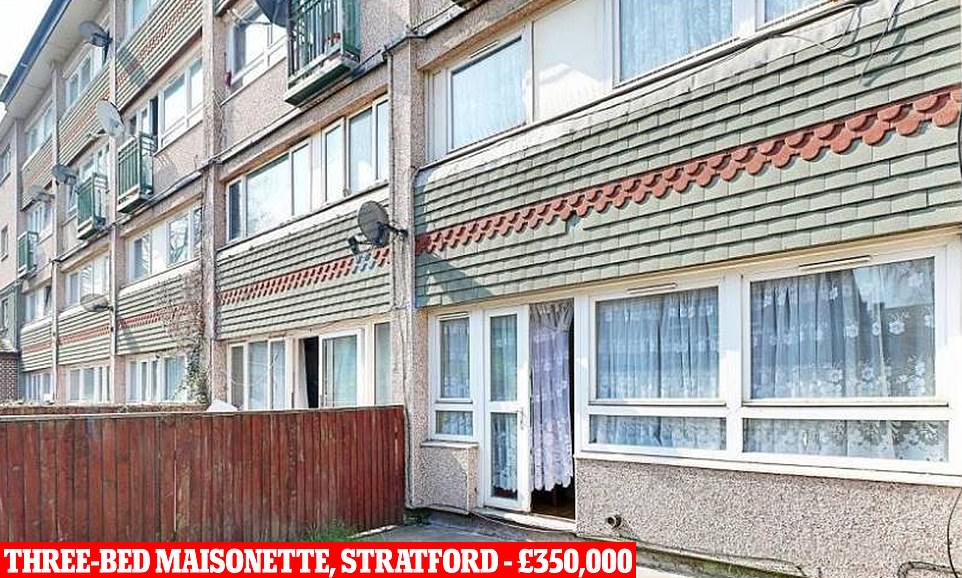 By contrast, that amount of money will get you a less-than-pretty three-bed maisonette in Stratford, East London

‘We’ve brought all of our staff back to manage the demand we’ve been seeing over the past two weeks,’ he said.

‘It’s taking longer for viewings now to make sure we’re following the correct social distancing measures so this is adding to how busy we are.’

However, the renewed level of interest comes despite news that banks are demanding ‘unaffordable’ mortgage deposits over fears of a collapse in house prices.

The number of mortgage deals for customers with a 10 per cent deposit has dropped from 780 in March to just 87, according to Moneyfacts. 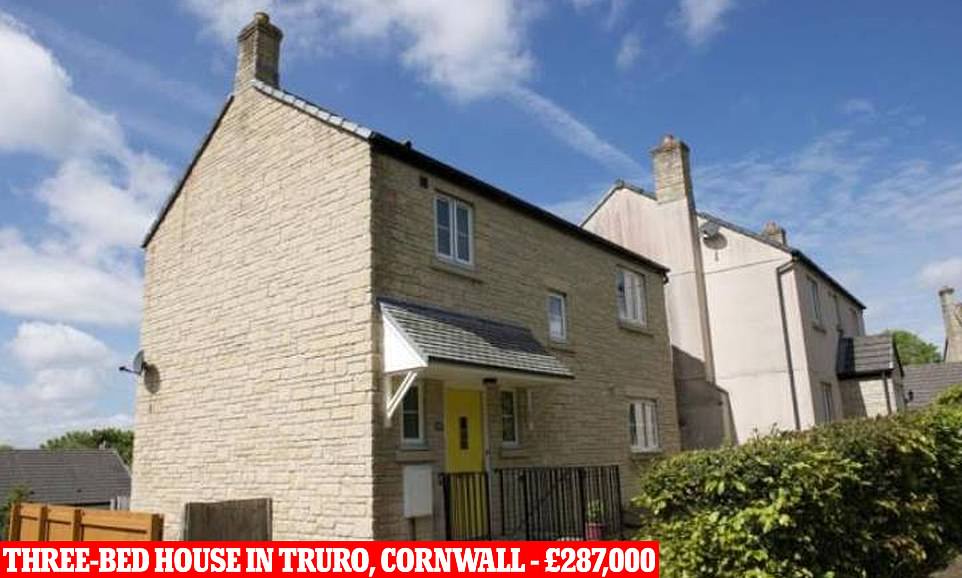 The average house price in Truro, Cornwall, is just £275,000. A little more than that will get you an attractive three-bed detached home 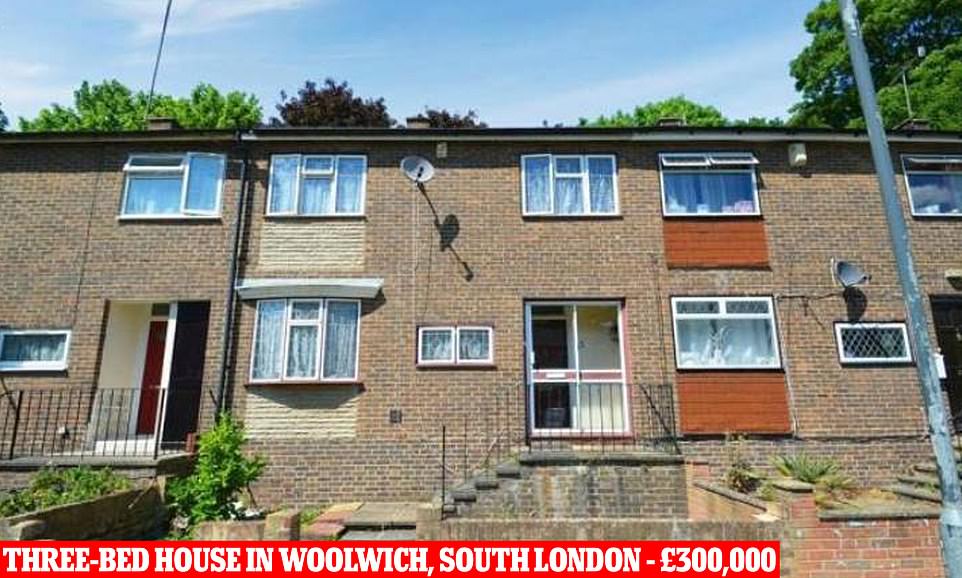 But buyers with a similar budget in Woolwich, South London, would only be able to pick up this modest three-bed terraced home

Meanwhile, the number 5 per cent deals on offer stands at just 30 – less than a tenth of the figure two months ago.

Buying agent Henry Pryor warned that if the situation continued the market could see a crash on the scale of 2008, when house prices plunged 16 per cent.

‘This is the sort of issue that we’ve got the biggest concerns about,’ he told MailOnline.

‘If this trend were to continue through the second half of the year that could have a downward pressure on house prices.’ 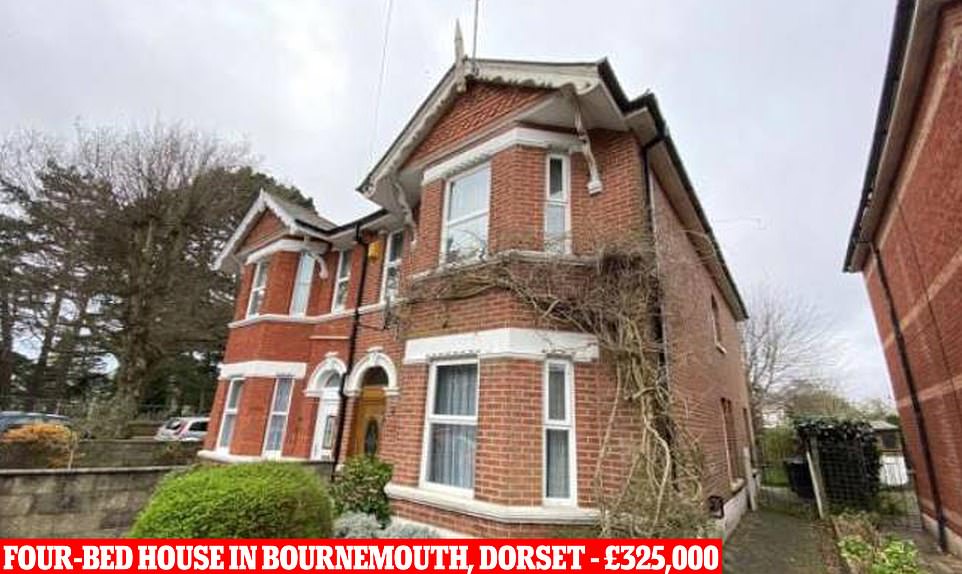 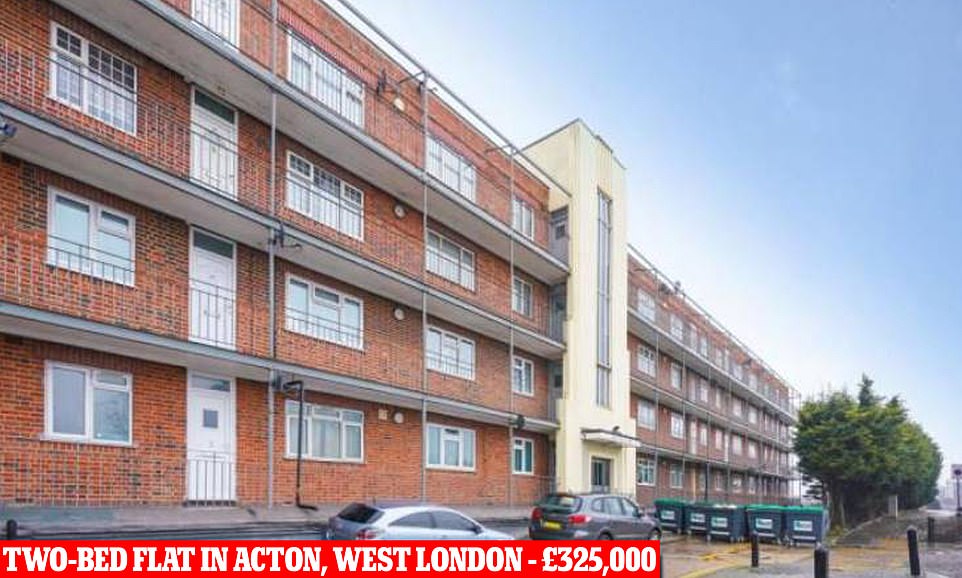 But you’ll only be able to pick up a two-bed flat for that amount in Acton, West London

Jonathan Roland, from property investor House Buy Fast, warned the banks’ actions was storing up problems for the future.

‘Holding back on lending causes problems for the market,’ he said. ‘We’ve just seen a great example of that recently with businesses struggling to get loans.

‘If that’s replicated in the mortgage market banks could be personally responsible for the collapse of the property market and we could even have another 2008 situation. Banks must lend cautiously and sensibly, yes, but also freely.’ 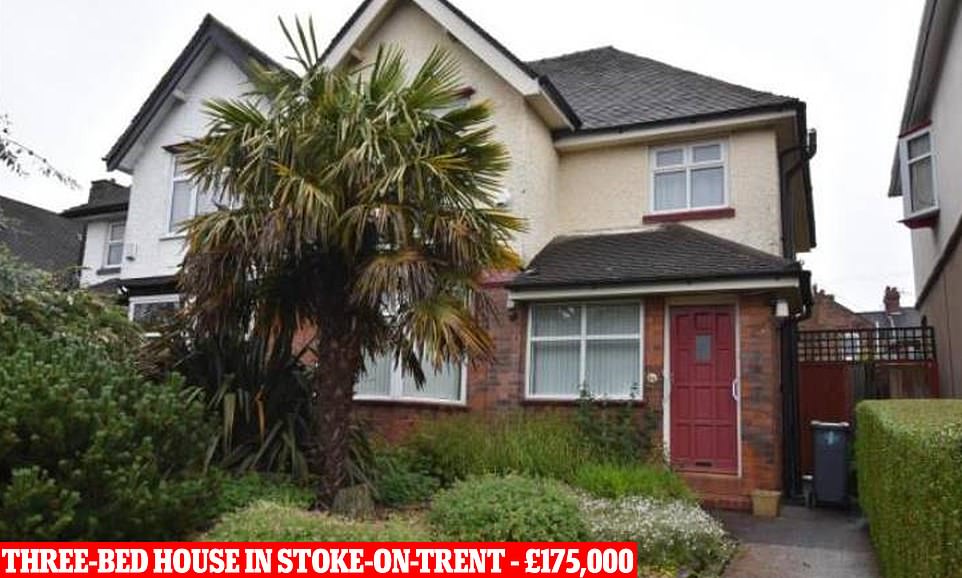 In Stoke-on-Trent, Staffordshire, the average house price is just £161,000. A little more than that will get you a three-bed semi-detached home 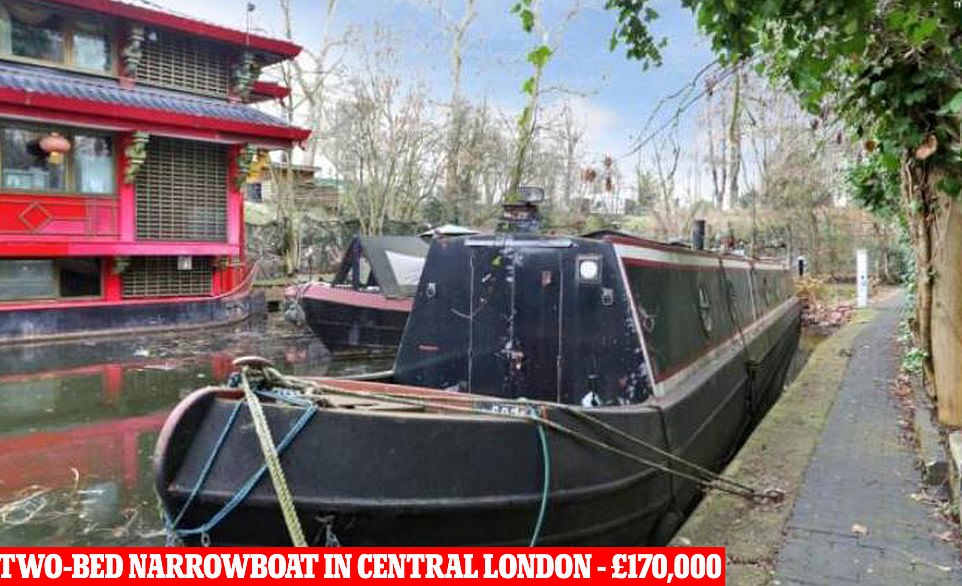 By contrast, in central London, you’d only be able to pick up a small canal boat for that amount

Earlier this month, Lloyds Banking Group, which also includes Halifax and Bank of Scotland, revealed in its quarterly results that has a base case scenario prediction that house prices will fall 5 per cent this year.

However, in Lloyds’ severe downside forecast it said that house prices would all 10 per cent this year and slide 30 per cent by 2022.