They’ve been sparking collaboration rumours this month after being spotted heading into recording studios together.

And the fruits of Rihanna and her boyfriend A$AP Rocky’s labour seem to be coming together, with the loved-up duo seen filming what appeared to be a music video together in The Bronx, New York on Sunday, during which they put on a giddy display while sharing a suspicious looking cigarette.

Smiling while sitting on a fire escape stairway and both dressed in neon fur clothing, Rihanna, 33, looked typically fabulous in a bright pink coat while A$AP Rocky, 33, donned a fluorescent green trapper hat.

Exciting: Rihanna, 34, and her boyfriend A$AP Rocky, 33, filmed a music video together in New York on Sunday 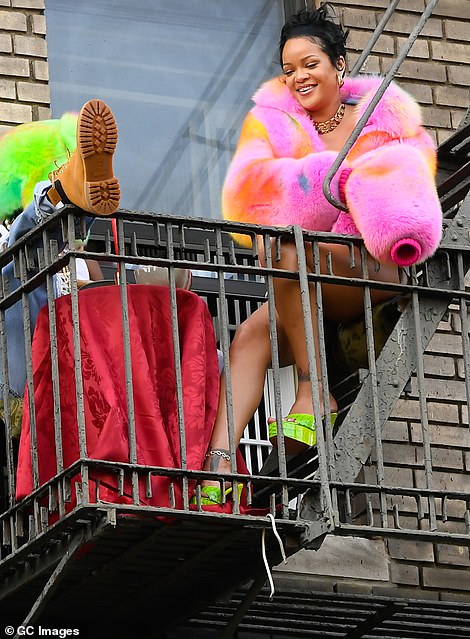 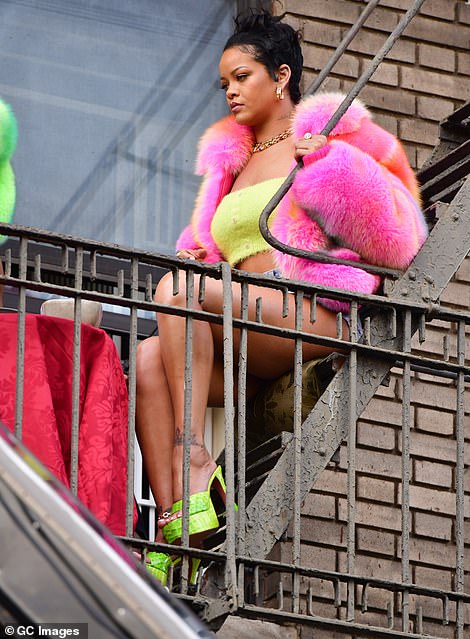 At one point, Rihanna applied her own make-up while pouting into a compact mirror, while A$AP – who was also rocking Timberlands and jeans – propped his leg up on a small table that had been set up between them on the balcony.

Rihanna sported a towering pair of bright green open-toe heels and accessorised with a chunky chain choker and a matching anklet.

A large camera could be seen filming the pair and both appeared in high spirits, grinning from ear to ear while working on their much-anticipated collaboration.

It’s unclear whether they were filming a video for his or her track, although it’s more likely for a Rocky song, as the rapper spoke to GQ in May about being 90 percent done his next album All Smiles. 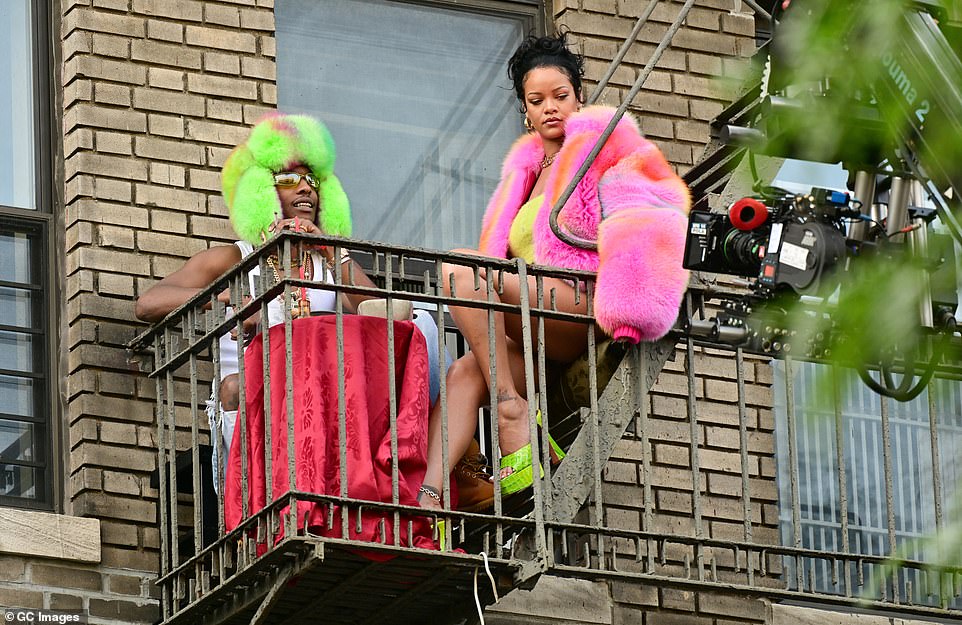 Filming: A$AP – who was rocking Timberlands and jeans – propped his leg up on a small table that had been set up between them on the balcony 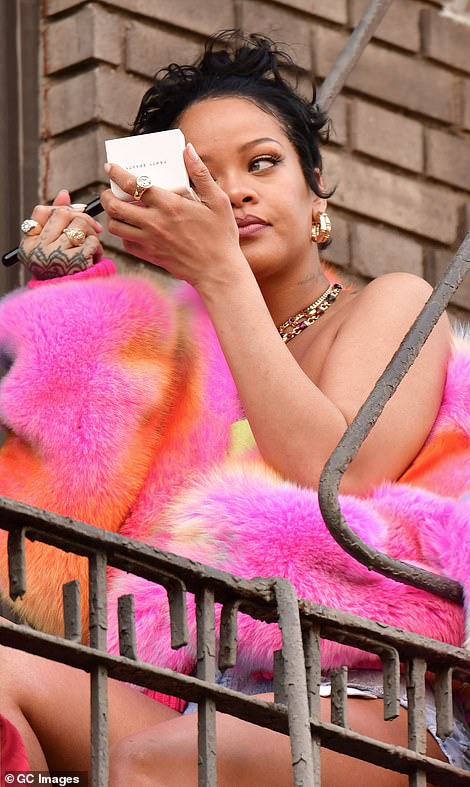 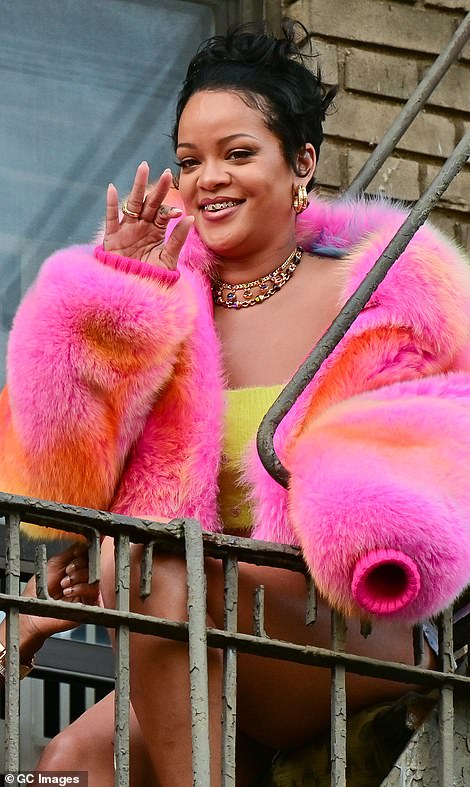 DIY: At one point, Rihanna applied her own make-up while pouting into a compact mirror

It comes hours after the loved-up dup were spotted keeping it laid-back in robes as they headed to their video shoot in The Bronx that same day. 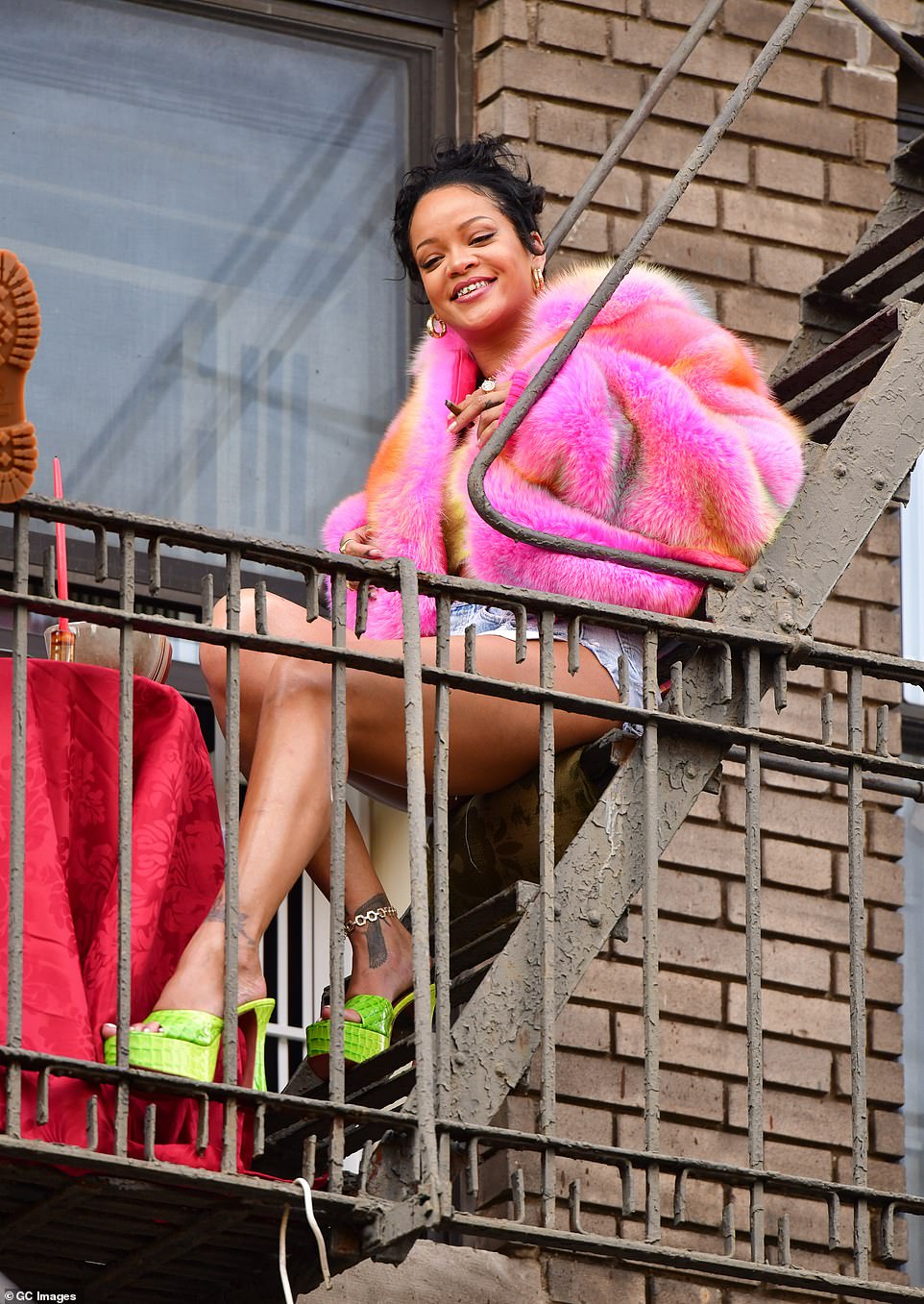 Happy: Rihanna appeared in high spirits while filming on a stairway in the Big Apple and was rocking a gold grill 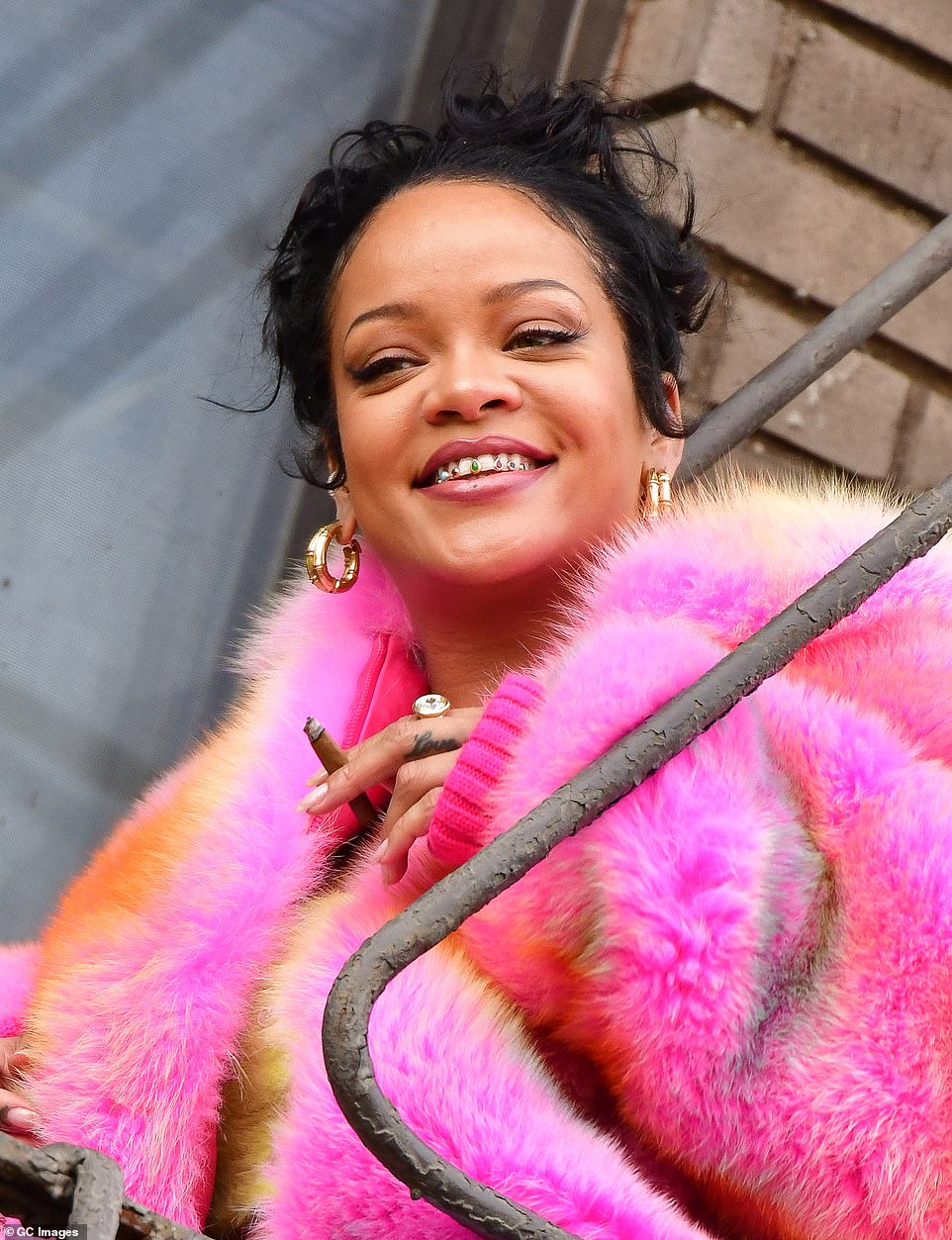 Look at those grills! The Umbrella hit-maker’s grills were adorned with colourful gemstones and the star was also sporting an immaculate manicure 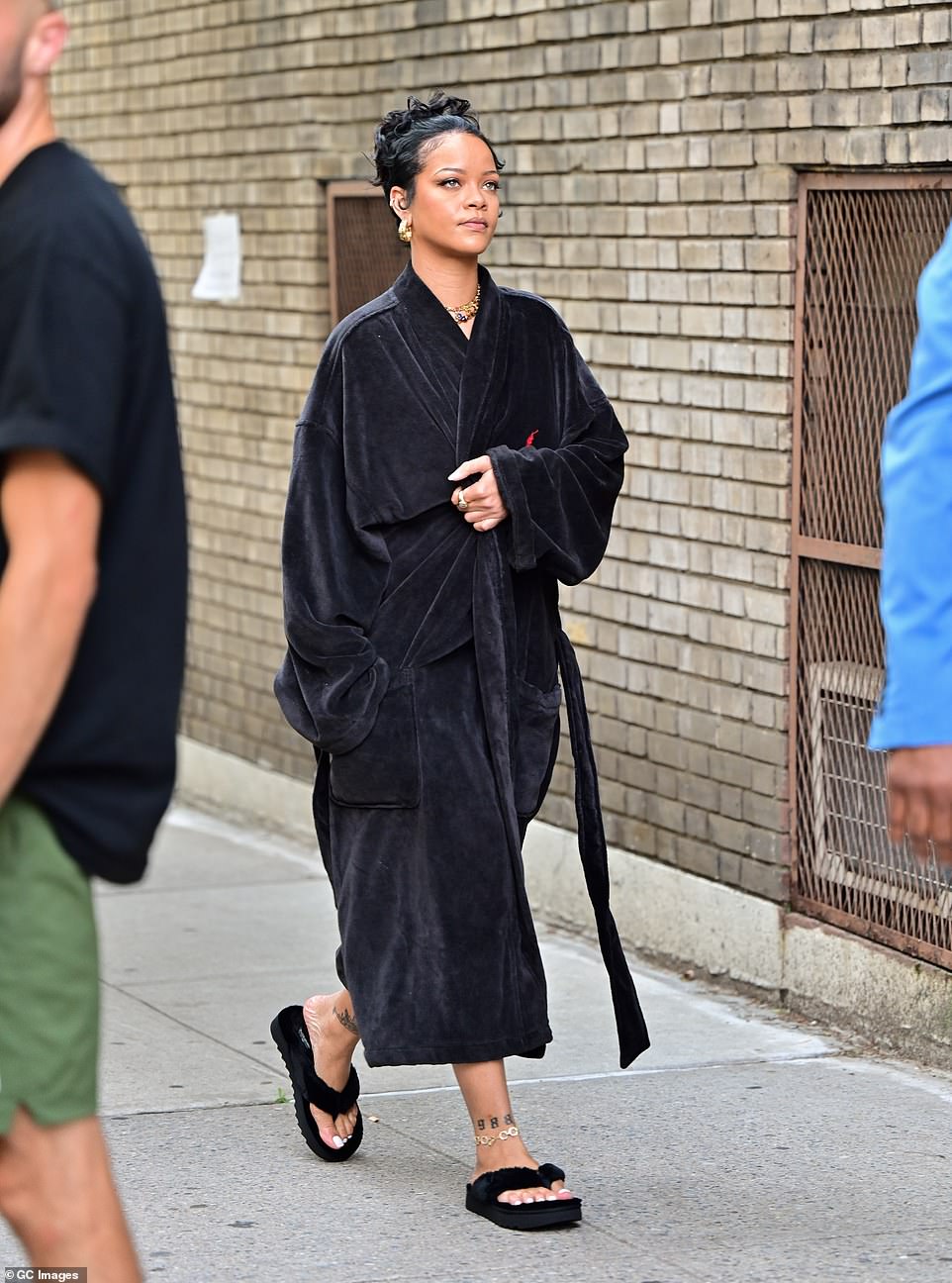 Back in the robe: Rihanna wrapped up beneath a robe for the second time on Sunday, also donning platform flip flops and showing off her manicure 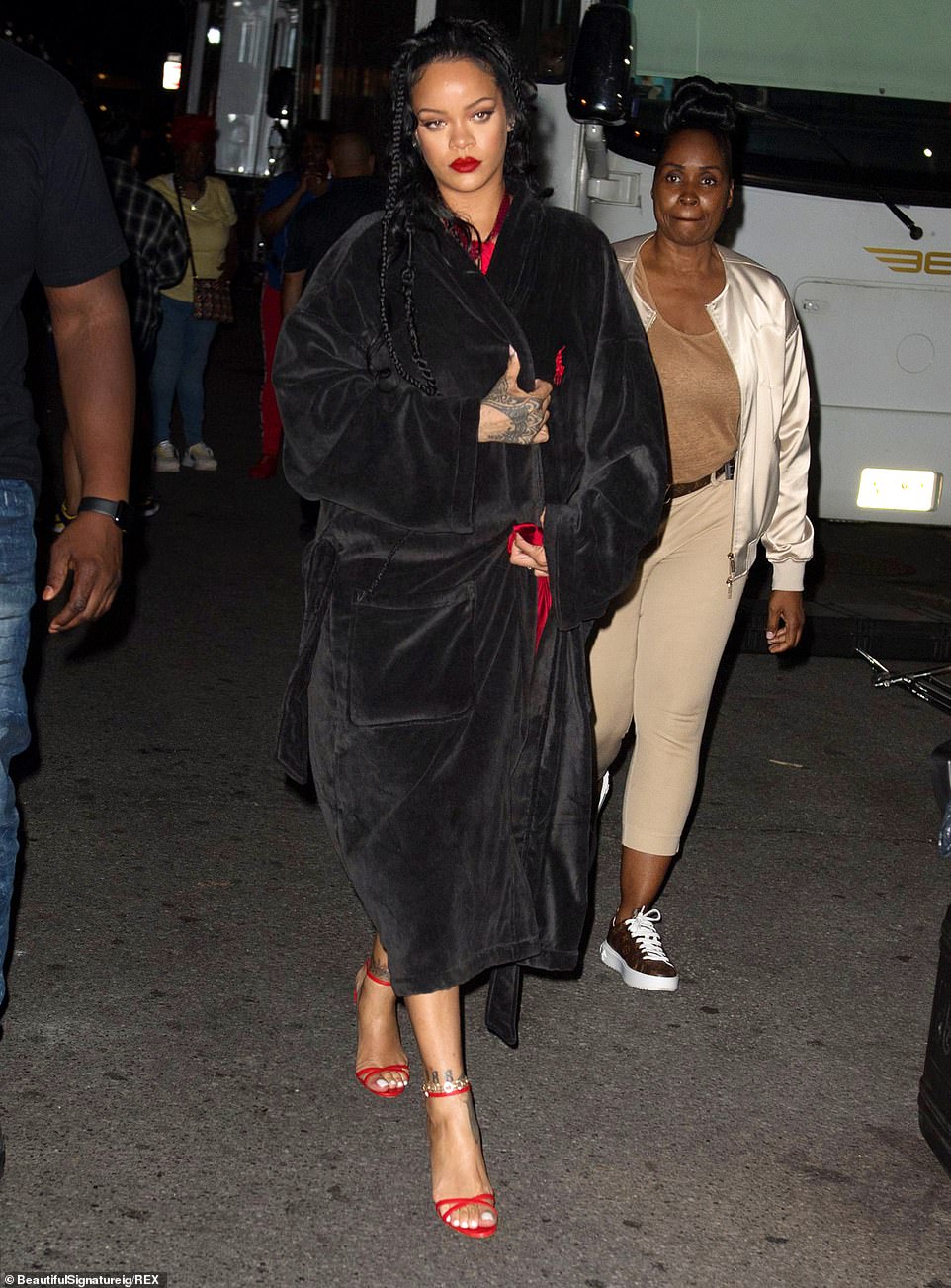 Preparing: Rihanna pulled off a Ralph Lauren robe worn over a hinted ruby satin dress as she arrived in Bronx on Sunday to film an upcoming music video with boyfriend A$AP Rocky

A$AP Rocky was also spotted in red, opting for a white dressing gown over a pair of crimson Adidas joggers.

He kept it casual, matching the Adidas joggers with a pair of black-and-white trainers.

The Umbrella hitmaker looked glowing, as she accentuated her height with a pair of red high heels. 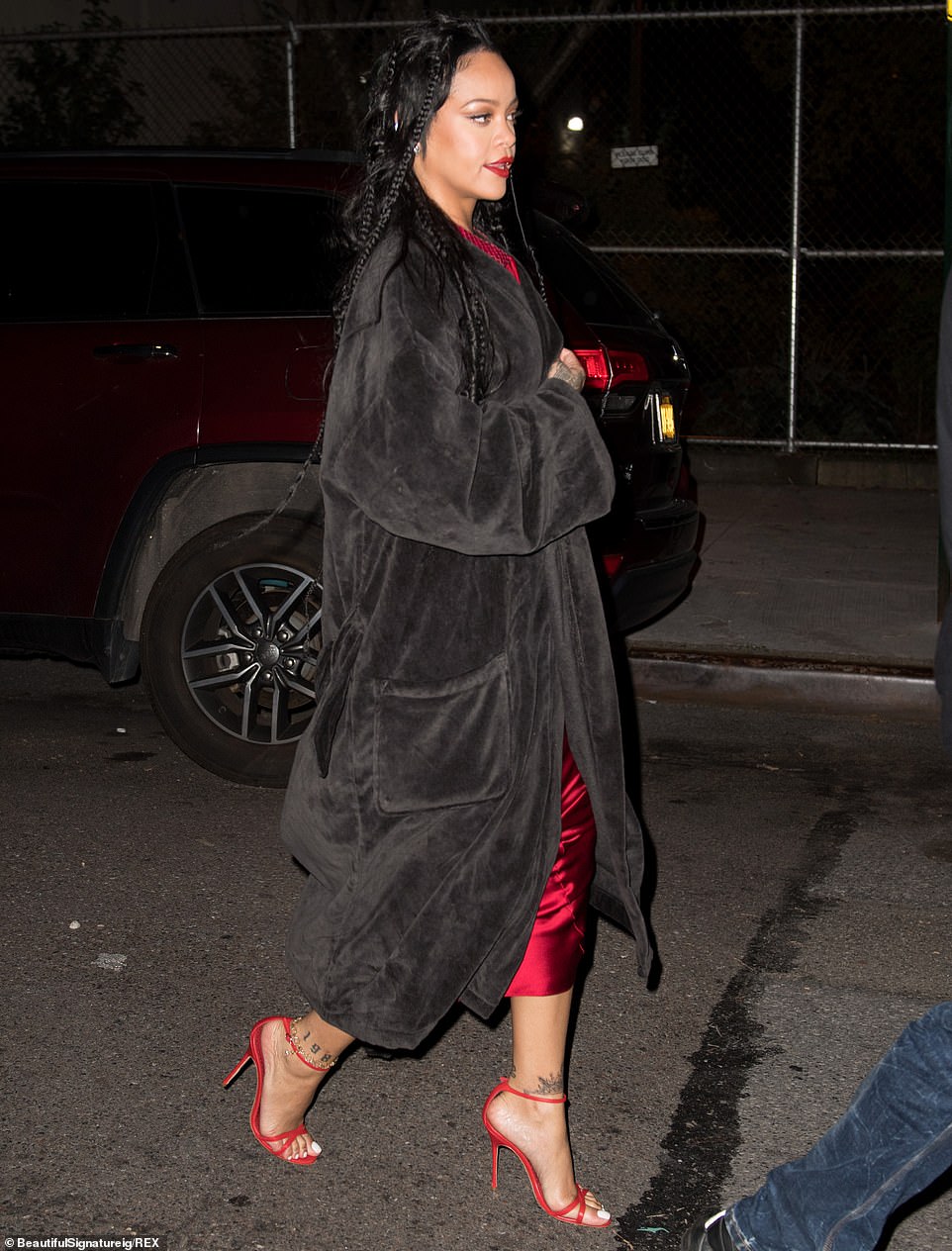 Lady in red: The Umbrella hitmaker looked glowing, as she accentuated her height with a pair of red high heels 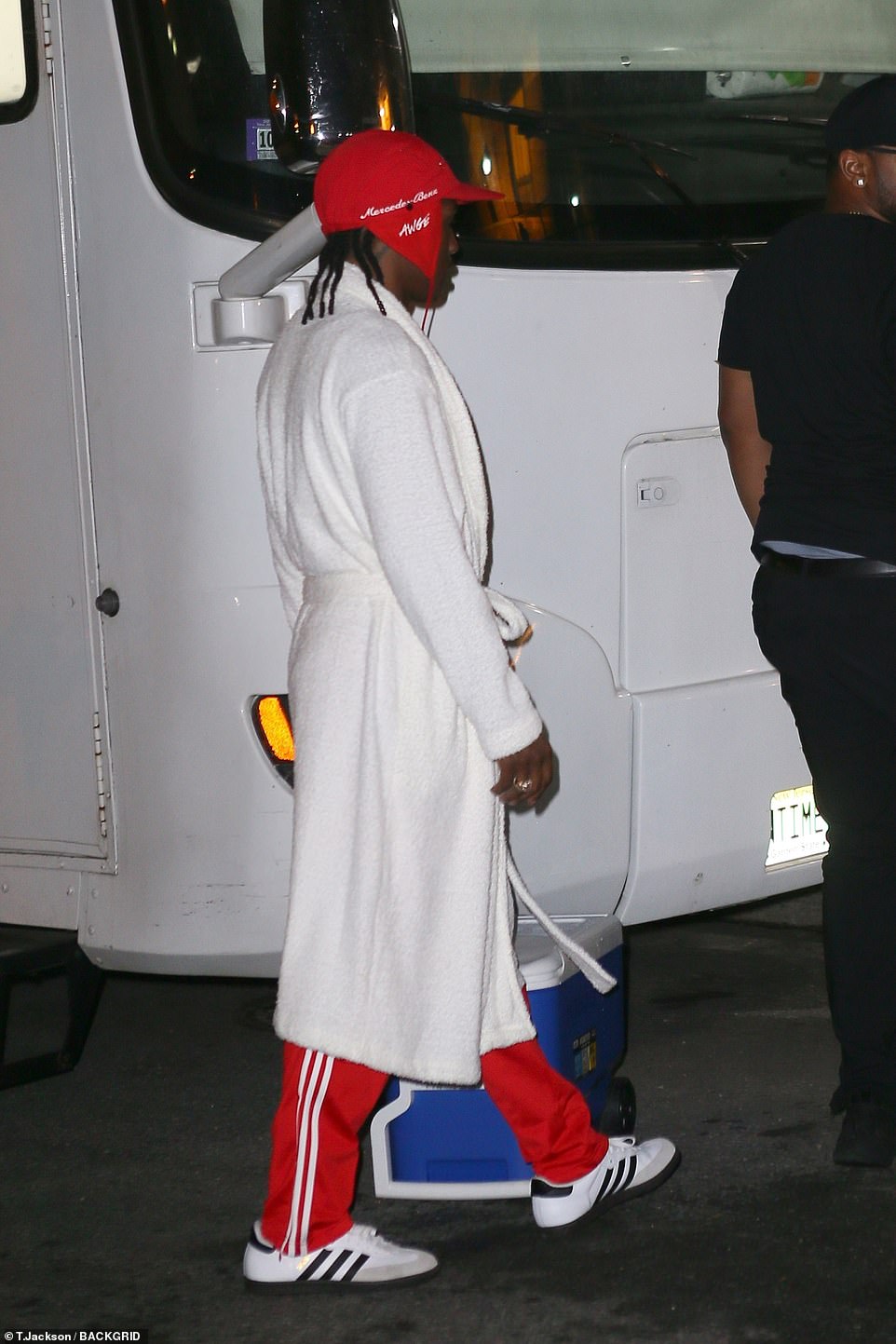 Laid-back: The rapper kept it casual matching the Adidas joggers with a pair of black-and-white trainers

Her skin looked radiant as she opted for a touch of bronze and drew out the colour of her dress underneath the robe with her statement lipstick.

The singer wore her signature dark locks in braids and was later seen with them tied up on her head.

Here, she was without the red lipstick, switching it for a more neutral tone – and she replaced her high-heels with a comfortable pair of black slippers.

In May, a report in The Sun seemed to soothe anxious fans after it was said that her ninth album had ‘finally come together,’ and that she had scheduled a music video shoot for July in Los Angeles.

‘Rihanna has been secretly working on new music for a long time and her ninth album has finally come together. She has kept fans waiting for a long time — and the pandemic slowed things up even more,’ the source said.

‘The project is still tightly under wraps but Rihanna will be filming a new music video in Los Angeles in July,’ adding that she would be using director Raja Virdi for the project.

Priot to her newest shoot, Rihanna had been keeping a low profile lately, even as her beau confirmed their romance and declared she was the ‘love of [his] life’ in an interview with GQ.

‘The love of my life. My lady,’ he said in a loved-up reverie. ‘So much better when you got the One. She amounts to probably, like, a million of the other ones.’

The two have been the subject of romance rumors going back to 2013, but it wasn’t until she ended things with her billionaire boyfriend Hassan Jameel that things started to heat up between the two musicians.

Beauty: Rihanna looked flawless as she headed to her next location