Hardi N, 34, an Iraqi living in the Netherlands under a residency permit, has been named as the alleged ringleader of the terror cell

The alleged ringleader of a Dutch terror cell accused of plotting a major attack was out on probation when he was arrested yesterday, it has been revealed.

Hardi N., 34, who was born in Iraq but lived in Arnhem, was initially jailed for 16 months in 2016 for trying to join Al Qaeda in Syria, but was released after less than a year after claiming to have renounced his extremist views.

As part of his probation, he agreed to seek religious counselling once a week.

Two other terror suspects also had previous convictions, including 21-year-old Waïl el-A. who had also attempted to travel to Syria, Dutch media reported.

Far-Right politician Geert Wilders, who has previously denounced the treatment of Hardi N as too soft, attacked the Dutch government for its soft-touch approach following his arrest.

‘Seven terrorists arrested. Three already condemned, including the Iraqi Hardi N. He was previously given a ankle band while awaiting sentence, and lied that he was “faithful, not radical.” Wake up the Netherlands!’ he tweeted.

Hardi N was first arrested in 2014 after WahtsApp messages were uncovered in which he discussed traveling to Syria to join Jabhat al-Nusra, Al Qaeda’s Syrian branch, with a friend who had already been. 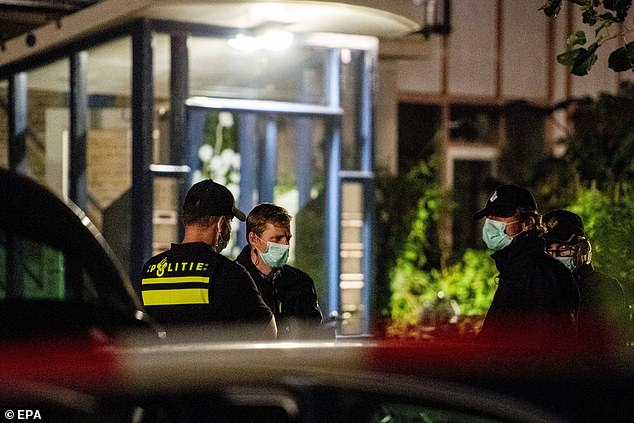 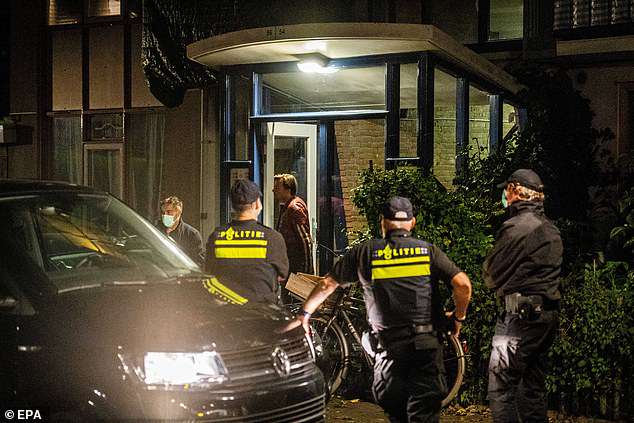 In 2015 he was set free while awaiting trial provided he wore an ankle bracelet.

At his trial he claimed he only wanted to help orphans in the country, but judges swept these arguments aside after seeing messages in which he told his friend ‘see you on the battlefield’.

The pair also complied a shopping list of things he would need during the conflict, including diarrhea pills, a sturdy winter coat and money.

In February 2016 he was sentenced to 16 months in jail with eight on probation. Despite the sentence being below the legal minimum, he decided to appeal.

The appeal was heard at The Hague in October 2017 when judges increased his sentence to 24 months, but agreed he could serve 21 months on probation.

Key to the decision was testimony from probation officers who said he had renounced his radical views and wanted a fresh start, De Volksrant reported.

N had also reconnected with his family and young daughter and had shown a willingness to work, the probation service argued.

He was still out on probation when heavily armed officers swooped in an arrested him and seven others yesterday,

Included in the arrest was Waïl el-A who was previously sentenced to two years in jail for attempting to travel to Syria, De Telegraaf reported. 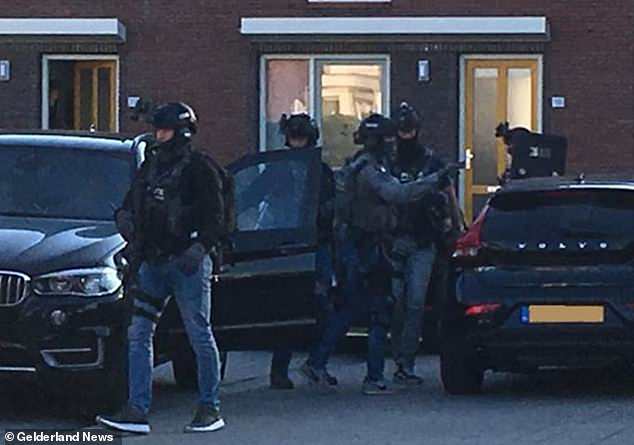 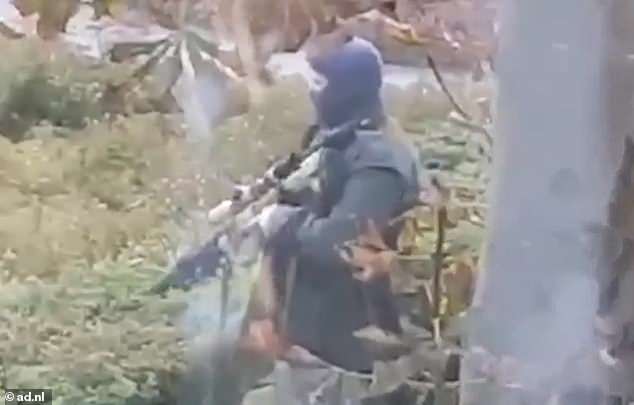 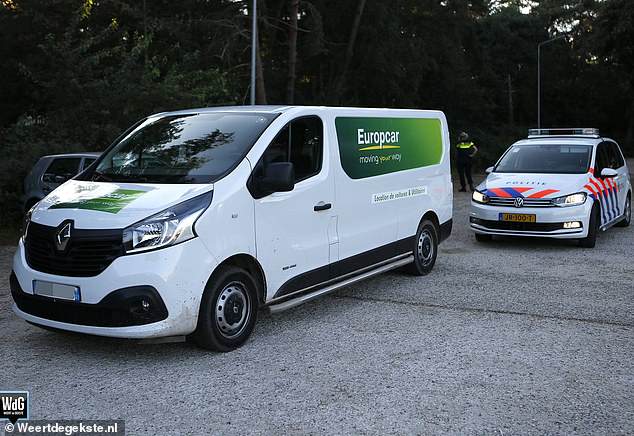 In Weert, police found a white hire van similar to those used in previous vehicle attacks, including London Bridge

El-A was also questioned by police after he managed to sneak into a Dutch airbase in place of a friend who worked as a groundskeeper there, before taking pictures of F-16 fighter jets.

Despite his past terror conviction, police found he had not broken any laws by taking the pictures and he was allowed to go free.

El-A is linked to N through a jihadi rapper known as Marouane B. All three lived in the town of Arnhem before B traveled to Syria to fight.

In a letter sent to De Telegraaf last year, B threatened that either he or his friends would carry out a terrorist atrocity in the Netherlands after the government supported US attacks in Syria.

Footage of the arrests showed heavily armed officers running towards a vehicle at a parking lot in Arnhem.

They then appeared to pull at least one man out from the front passenger seat and another from the back before throwing them to the floor. 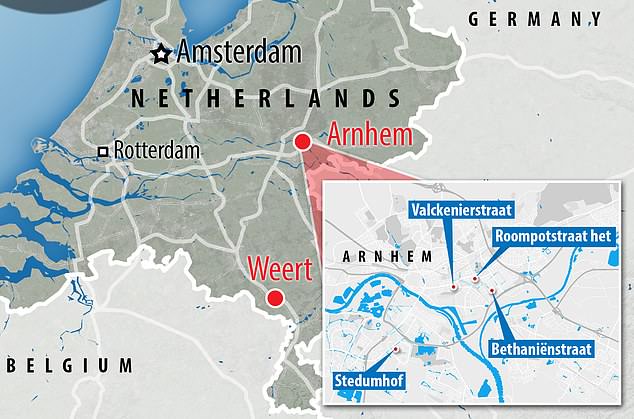 The main map shows the cities where the raids took place, Weert and Arnhem. The inset shows the four addresses in Arnhem that were raided 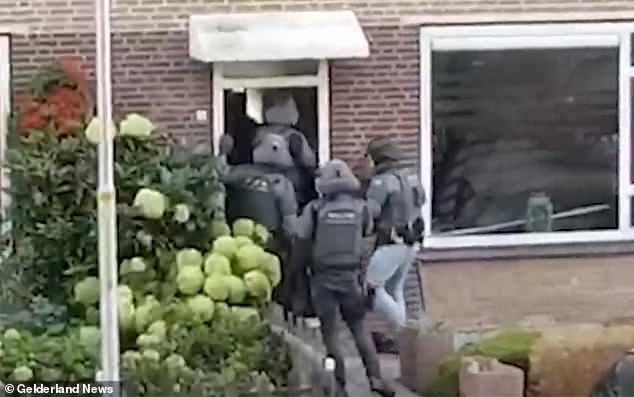 In Arnhem, (pictured) police backed up by surveillance helicopters forced open a door to a house and threw smoke bombs inside

In total Police arrested seven men, who ranged in age from 21 to 34, at four properties in Arnhem as well as other locations in the southern city of Weert.

In Arnhem police backed up by surveillance helicopters forced open a door to a house and threw smoke bombs inside. Explosions were heard, but it is not clear where these came from.

The seven suspects were found with five guns, police say.

They were also trying to obtain AK47 assault rifles, handguns, bomb vests, grenades and raw materials for bombs and were looking for opportunities to train with the weapons, according to prosecutors.

In Weert, police also found a white hire van similar to those used in previous vehicle attacks, including London Bridge.

Officials said that the investigation sped up this month because of the suspects’ ‘advanced preparations’.

It is not yet known exactly what event they were planning to target.

The suspects are to be brought before an investigating judge on Friday at a behind-closed-doors hearing. 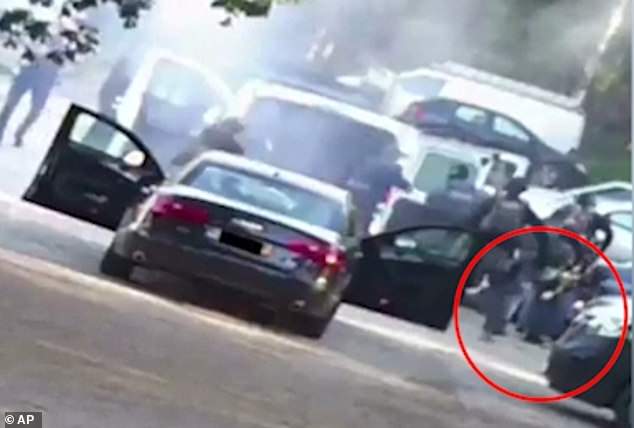 Footage shows heavily armed officers running towards the vehicle at a parking lot in Arnhem. They then appear to pull at least one man out from the front passenger seat (circled) and another from the back before throwing them to the floor 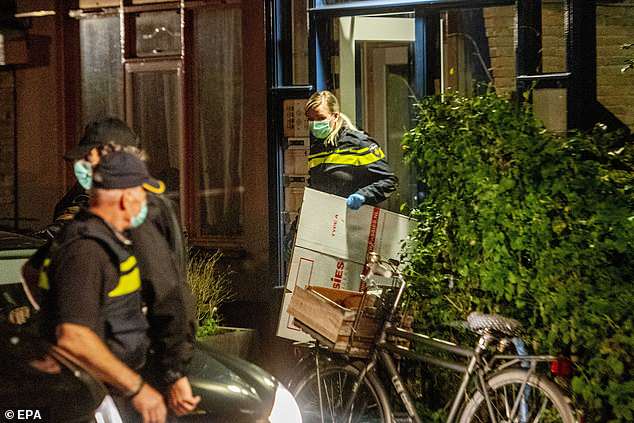 Police carry items out of an apartment belonging to one of the alleged jihadists in Vlaardingen, South Holland 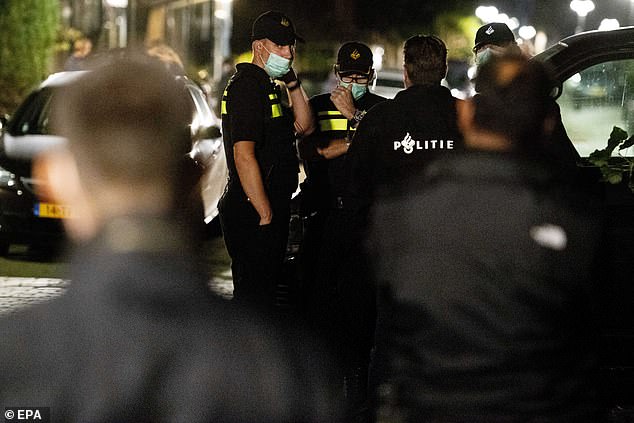 Officers searched properties belonging to the terror suspects shortly after the raids in Arnhem and Weert. Police are pictured here in Vlaardingen 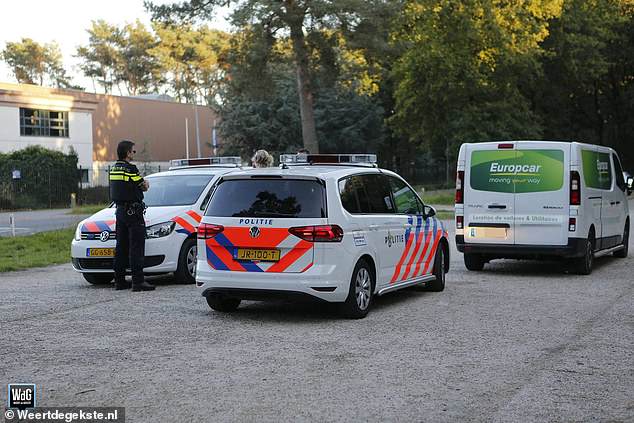 The seven suspects are being held in isolation from each other and can only be contacted through their lawyers.

Three of them were from Arnhem, two from Rotterdam, one from Huissen and another from Vlaardingen,Weertdegekste reported.

‘One of the men from Arnhem wanted to commit an attack with a group at a major event in the Netherlands and kill many victims, according to the Dutch Intelligence Service (AIVD),’ the prosecutor’s office said.

The Dutch anti-terror coordinator’s office said in a tweet that the alleged plot corresponded to the current threat profile for the Netherlands, which is at four on a scale that tops out at five.

‘Jihad networks are also active in the Netherlands with the intention to plot attacks in Europe,’ the office said. ‘Today’s arrests must be seen in that light.’

Minister for Justice and Security Ferd Grapperhaus told national broadcaster NOS that police acted in time to prevent an attack.

‘In a sense it is serious, but luckily it’s also good news – a terrorist cell that was plotting an attack has been taken down,’ Grapperhaus said. ‘They weren’t so far that it was a danger to society, in the sense that it was nearly too late. But they were quite far in their preparations.’ 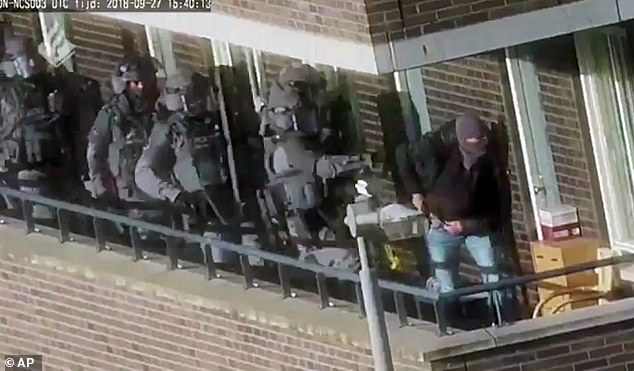 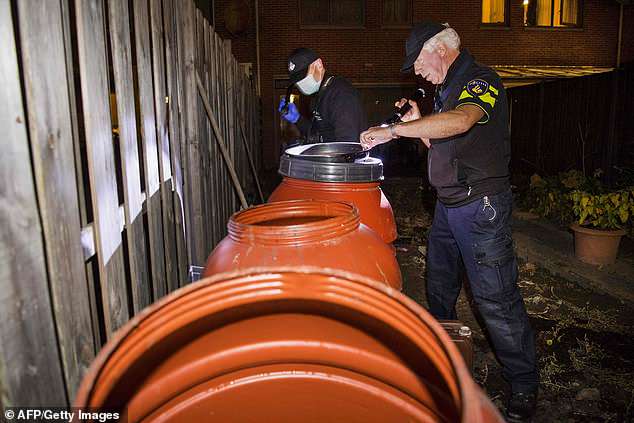 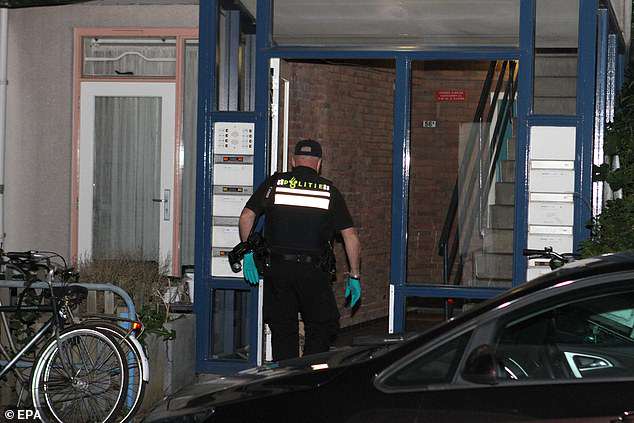 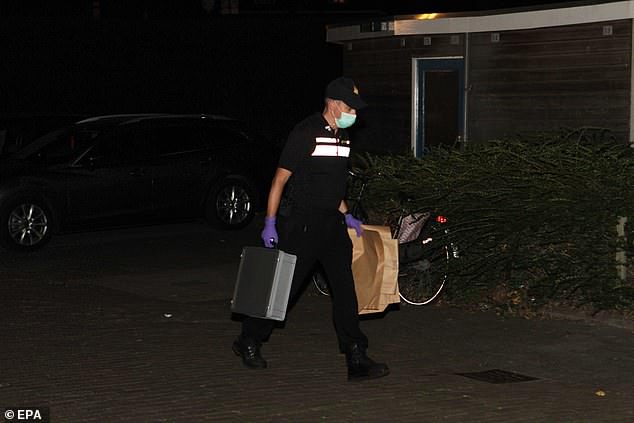 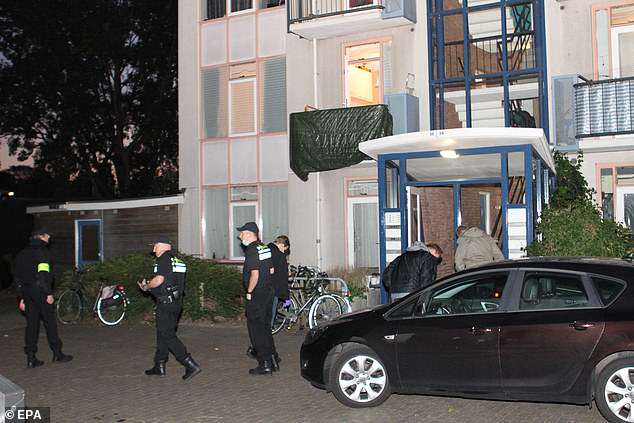 The terrorism threat level for the Netherlands has not been raised following the raid. Pictured: Police outside the flats in Vlaardingen

How political tensions in the Netherlands have risen in recent months

Tensions in the Netherlands have risen in recent months as far-tight politician Geert Wilders launched a cartoon competition for people to submit drawings of the prophet Muhammad.

Dutch prosecutor said he had chosen the Netherlands for the attack believing Islam to be ‘frequently insulted’ in the country.

The likelihood of a terror attack in the Netherlands ‘remained substantial’, the Dutch anti-terror agency NCTV said last week, with terror threat levels remaining at level four out of five.

The arrests today came three months after two men were arrested in Rotterdam on suspicion of preparing attacks in France and in the Netherlands.

Prosecutors said earlier this month they were ‘close’ to launching their attack but there has been no mention of what the target in France might have been.

The Netherlands has so far been spared from the slew of terror attacks which have rocked its closest European neighbours in the past few years.

But amid a number of scares and reports that people linked to some of those attacks may have crossed briefly into the country, top Dutch security and intelligence officials have stressed that the threat level is substantial.

In August, a 19-year-old knifeman stabbed and wounded two American tourists at Amsterdam Central Station. Police later said they believe the man, an Afghan with a German residency permit, had a ‘terrorist motive’ for the attack.

Witnesses described scenes of panic on Friday as gunshots rang out and thousands of commuters and tourists were evacuated from the rail terminus shortly after midday.

The attack came a day after an announcement by Dutch anti-Islam politician Geert Wilders that he was cancelling moves to stage a cartoon competition to caricature the Prophet Mohammad, a plan that had angered many Muslims.

Both victims recovered from their wounds in hospital. 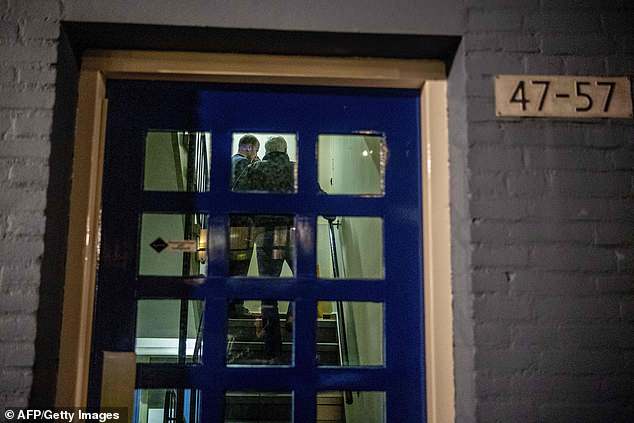 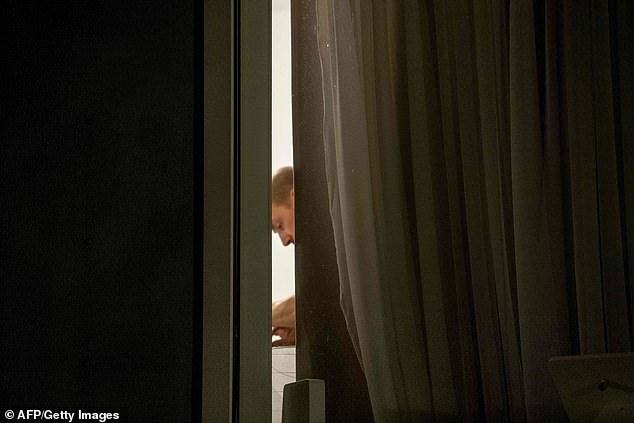 Police comb through the apartment of the Rotterdam suspect, as they continue to piece together evidence to convict the men of terror charges 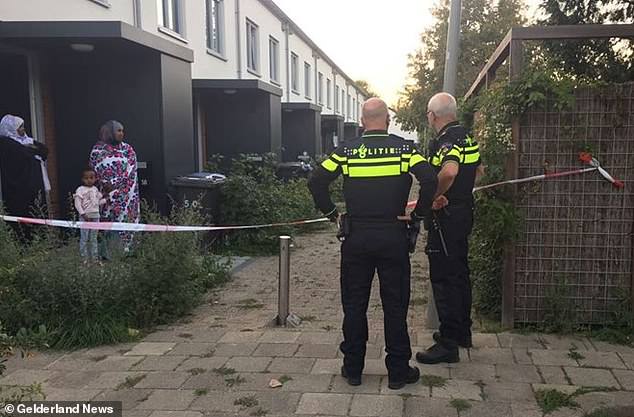 Three of the men were from Arnhem, where police are pictured after having secured the scene of the afternoon raid