The ringleaders of a Romanian ‘Mission Impossible’ criminal network who stole £3.3million of ‘irreplaceable’ books have today been jailed for more than 23 years.

Gavril Popinciuc, 45, and Cristian Ungureanu, 41, plotted raids which involved cutting holes in roofs and skylights of warehouses, abseiling down to avoid sensors that would have set off alarms.

Their most prominent raid was a heist during which ‘irreplaceable’ rare books worth more than £2million were stolen from a west London depot in 2017.

Seven defendants were the first of 12 men to be sentenced at west London’s Kingston Crown Court, having pleaded guilty to either conspiracy to commit burglaries, conspiracy to conceal and transfer criminal property, or both.

Gavril Popinciuc, 45, the ‘brains’ and Cristian Ungureanu, 41, the ‘brawn’, plotted raids that involved cutting holes in roofs and skylights of warehouses, abseiling down to avoid sensors that would have set off alarms

Editions of works by Sir Isaac Newton and the Italian astronomer Galileo were among 170 books stolen from the warehouse during the five-hour operation, in which two members of the gang abseiled from the roof, managing to avoid setting off sensor-based alarms.

They were found buried under a house in rural Romania last month. 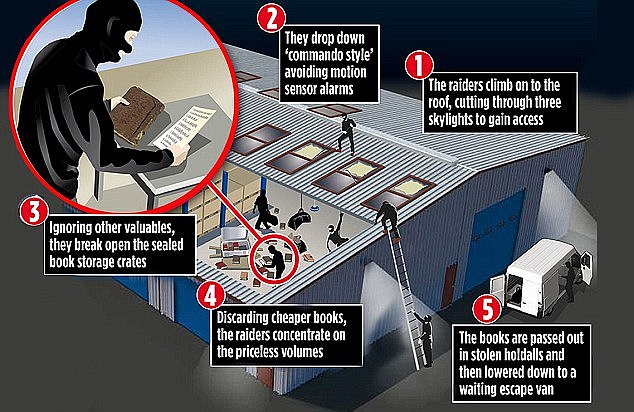 Graphic, above, shows how the gang pulled off their ‘Mission: Impossible’-style heist

Before they were sentenced, Judge Jonathan Davies told the court they were part of a ‘criminal network’ that conducted a series of ‘serious, professional crimes originating in Romania’.

Judge Davies said ‘they each played their part’ and ‘took risks with their eyes open’ due to the financial reward.

He added: ‘Each of the burglaries was a carefully planned operation carried out with Mission Impossible skill.’

He rejected their pleas for more lenient sentences, saying the risk of prison ‘had to have occurred to you’.

Twelve ‘high-value and well-planned’ raids were committed by the ‘sophisticated’ network in the UK between December 2016 and April 2019, with most targeting premises holding hundreds of expensive and portable items such as smartphones, tablets and laptops, the court was told.

Among their raids was the ‘deliberate targeting’ of customs clearing centre Frontier Forwarding in Feltham on January 29 2017, inside which were works of ‘immense cultural significance’ due to be shipped to the US for a specialist book auction.

They belonged to three book dealers, two Italian and one German, and had a combined insurance value of about £2 million. 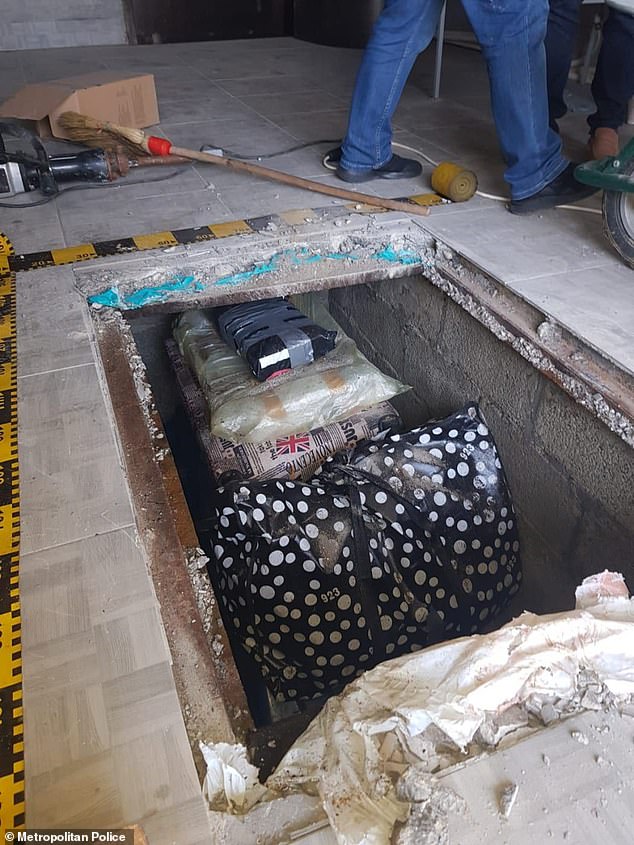 Hundreds of rare books worth millions of pounds were stolen in a sophisticated heist by the crime gang – who also carried out 11 other raids, Kingston Crown Court was told. Pictured: The books were found in a hidden underground compartment

Judge Davies said he believed the books were ‘clearly targeted’ and the planning was ‘very careful’.

The lengthiest sentence of five years and nine months was handed to Popinciuc, 45, who had an ‘overseeing and controlling role’ in the gang.

Ungureanu, 41, a father of two sons, who was ‘present at the scene of burglaries’ and held a ‘leading role’ within the crime network, was sentenced to five years and one month.

His younger brother, Ilie Ungureanu, 37, who oversaw the transportation of the books out of the United Kingdom, was jailed for three years and nine months.

Victor Opariuc, 29, one of the men who abseiled into the warehouse and brought ‘crucial skills’ to the operation, was sentenced to three years and seven months.

Narcis Popescu, 34, who rented a house in Balham, south London, where the books were stored, was jailed for four years and two months.

Also sentenced in the afternoon were Marian Albu, 41, from Harrow in west London, and Traian Mihulca, 32, who were both handed four years.

Eleven other raids, including several using the same method of abseiling through the roof, were carried out by the group, with the value of goods stolen in those burglaries estimated by Scotland Yard at around £2 million.

The other five gang members will be sentenced tomorrow morning.