Rio Ferdinand has revealed that a playful Prince William couldn’t resist teasing him over football during his recent OBE investiture.

Speaking on the upcoming episode of the Jonathan Ross Show, the Man United veteran, 44, opened up about the ceremony, which saw him receive the royal honour at Windsor Castle on Tuesday.

He said that William, 40, couldn’t help but mention how his beloved Aston Villa football club won three-one over Ferdinand’s old club during a game last Sunday.

Ferdinand joked the Prince of Wales was ‘a bit out of order,’ but added the ceremony was ‘great,’ and that he was ‘delighted’ to receive the honour from William.

Speaking on the upcoming episode of the Jonathan Ross Show, Rio Ferdinand, 44, opened up about the ceremony, which saw him receive the royal honour at Windsor Castle on Tuesday 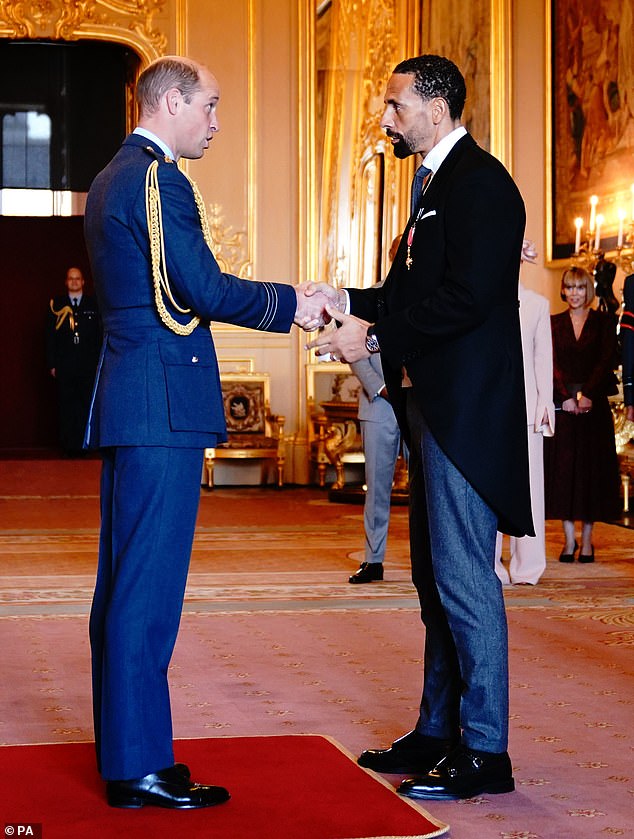 He said that William, 40, couldn’t help but mention how his beloved Aston Villa football Club won three-one over Ferdinand’s club during a game last Sunday 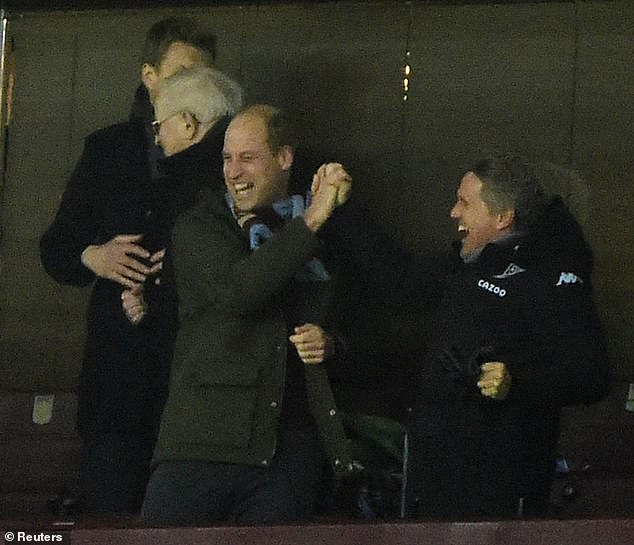 ‘I was delighted by that. He was a bit out of order if I must be honest. Aston Villa, his team he supports, beat Man United at the weekend and that was the first thing he said,’ he joked.

‘But no it was great, it was great to see him. I’ve been lucky to meet him quite a few times so talking about family really.

‘How your family are doing, how mine are doing and I was just – no matter how many times you meet someone of that stature, you walk in and your knees are buckling all over the place and nervous. 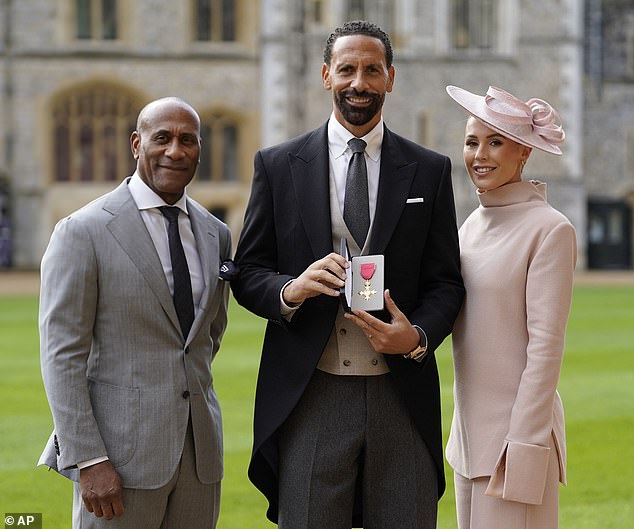 Rio and his wife were joined by the footballer’s father Julian Ferdinand, pictured left in the grounds of Windsor Castle

The ex-Manchester United defender, who won 81 caps playing for the Three Lions, was presented the honour a day after turning 44 in recognition to his services to sport and charity work.

It comes after the sports star-turned-pundit established the Rio Ferdinand Foundation to support young people in disadvantaged communities.

His loving wife Kate watched on as father-of-four Rio was made an OBE by Prince William.

Rio has spent years battling a range of issues, from racism to a lack of social mobility for children and young adults.

Speaking after the Prince of Wales awarded him an OBE during an investiture ceremony, Ferdinand said: ‘I’ve got a platform because of football but it’s about using that and utilising that in the right way so it can impact other people, which has always been the drive for me.’ 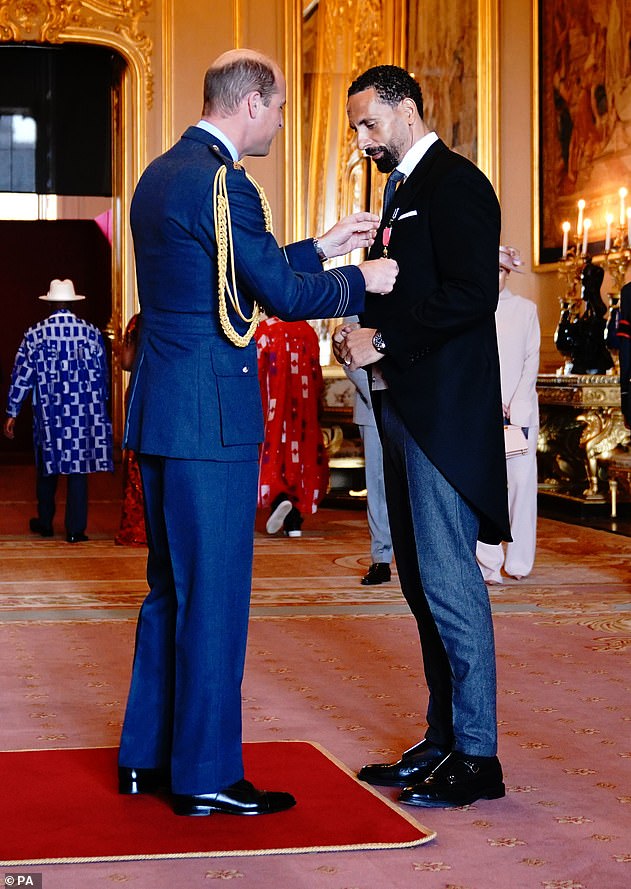 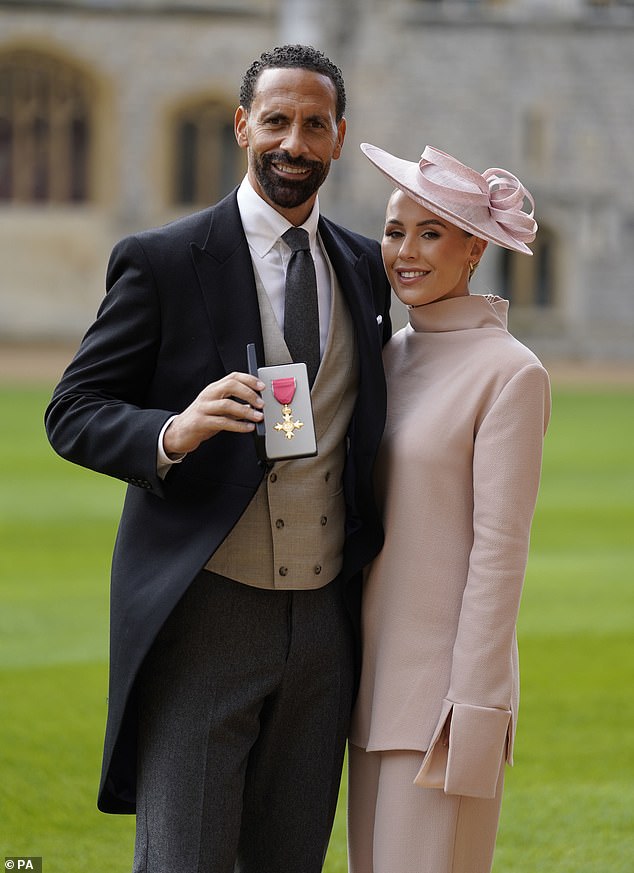 Rio’s OBE comes after he set up the Rio Ferdinand Foundation to support young people in disadvantaged communities. He is pictured at Windsor Castle with his wife Kate Ferdinand

Joined at Windsor Castle by his father Julian, he added: ‘I felt a responsibility to do that, especially as I got further in my career, and you have the ability to influence people and using those platforms for positive change.’

He won a Bafta award and plaudits for hosting the BBC documentary Rio Ferdinand: Being Mum And Dad, about coping with the loss of his former wife, Rebecca, in 2015 to breast cancer and looking after their three children.

Rio has worked to raise awareness for breast cancer after Rebecca’s death, which was tragically followed by the death of his mother, Janice St Fort, from the same disease aged 58 in 2017.

Speaking to Sky News moments after receiving the honour, Rio said: ‘This obviously means a lot. The inspiration behind this was my mum and my dad… it means a lot to me.’

While still a footballer he established the Rio Ferdinand Foundation, which states on its website that it aims to help youngsters from working-class areas in ‘tackling racism and inequality, and providing opportunities and pathways to deliver social mobility and realise personal potential’.

He stressed that providing opportunities is ‘the key’ and ‘nothing was to be given on a plate, you still have to earn it’.