Riot police have been deployed on the streets this morning as polling stations opened across Catalonia for the region’s controversial independence referendum.

People began arriving before dawn to join parents, children and activists who have occupied the buildings in the northern Spanish region, defying a judge’s order to vacate before polling began.

The country’s Constitutional Court has suspended the referendum and the Spanish government says it is illegal.

Regional separatist leaders have pledged to hold it anyway and called on 5.3 million eligible voters to show up for casting a ballot.

In the town of Girona, Guardia Civil officers were seen smashing doors down at a polling station as defiant voters linked arms in a show of unity against the authorities.

The government department posted pictures of four plastic ballot boxes  and piles of ballots alongside the message: ‘These are the first ballot boxes and ballots seized by police in Barcelona.

‘Officers are continuing their deployment in Catalonia’

Spain’s interior ministry said in a Twitter message that included a picture of four plastic ballot boxes and piles of ballots.

Separatist groups also told people to hold activities in schools over the weekend to dodge the orders to vacate. Police have been ordered to avoid the use of force.

Some of the Catalans who are defying the court orders say they want to send a strong message of displeasure with central authorities. 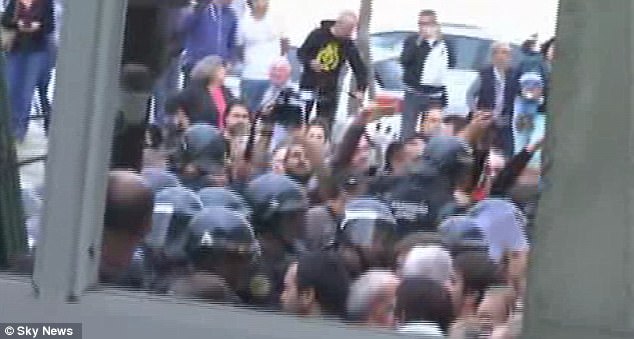 Activist Augsti Gil said there were no ballots or ballot boxes in Barcelona’s Joan Fuster high school, where more than a hundred people have joined another hundred who spent the night occupying the designated polling station.

Joaquim Bosch, a 73-year-old retiree, was at Princep de Viana high school, where a crowd of 20 people was growing.

He said: ‘I have come to vote to defend the rights of my country, which is Catalonia.’

Police have been ordered to stop ballots from being cast and have been cracking down for days, confiscating millions of ballots and posters.

Tensions have been rising across the country over the planned vote, with thousands marching in Madrid to protest against the separatists’ attempt to break up their nation, demanding that Catalan leaders be sent to jail.

In Barcelona, the capital of Catalonia, thousands more took to the streets to urge their prosperous region to stay inside Spain.

Spain’s foreign minister said on Saturday that the Catalan government’s plan is anti-democratic and runs ‘counter to the goals and ideals’ of the European Union.

He said some pro-independence groups are ‘adopting Nazi-like attitudes by pointing at people that are against that referendum and encouraging others to harass them’.