Rip-off daily overdraft charges are to be outlawed by the City watchdog, ending sky-high fees for customers who accidentally stray into the red

By James Burton For The Daily Mail

Rip-off overdraft fees are to be banned in a victory for the Mail.

Extortionate daily charges will be outlawed by the City watchdog, ending the misery of customers who are hit with sky-high fees for accidentally straying a few pounds into the red.

The crackdown comes after the profits banks make from the charges were revealed by the Financial Conduct Authority.

Rip-off overdraft fees are to be banned. The crackdown comes after the profits banks make from the charges were revealed by the Financial Conduct Authority.  Stock picture shows money

It said firms raked in £2.4billion from overdraft fees last year alone – and some customers are charged interest more than ten times higher than the maximum rates allowed at payday lenders.

Reforms come after a Mail campaign against the fees which started more than a decade ago.

Andrew Bailey, chief executive of the FCA, said: ‘We are proposing to make the biggest intervention in the overdraft market for a generation. It is clear to us that the way banks manage and charge for overdrafts needed fundamental reform.

‘We are proposing a series of radical changes to simplify the way banks charge for overdrafts and tackle high charging for unarranged overdrafts. These changes would make overdrafts simpler, fairer, and easier.’

Overdrafts make a vital contribution to banks’ profits, accounting for a third of all income they made from current accounts in 2017. At present, banks typically charge a set amount of money every day a customer strays into the red. These tend to be much higher for a so-called unarranged overdraft which has not been agreed in advance.

FCA research found that struggling families are the heaviest users of unarranged overdrafts, meaning the highest costs fall on those least able to bear them.

Just 3.7 per cent or £279million of total overdraft lending was unarranged last year – but this generated a massive 30 per cent or £720million of fees. Fees associated with refused payments generated £236million for firms last year.

Under the FCA proposals, which could come into effect in June, banks will not be allowed to charge more for unarranged overdrafts than arranged ones.

They will also have to scrap ‘per day’ charges and replace them with a simple, understandable interest rate so that customers know more clearly what they will be charged.

Banks will also have to justify extra fees when a customer strays into the red or a payment is rejected, such as charges for sending a letter. The FCA said these bills should be no higher than the actual cost to the bank.

Consumer groups welcomed the proposals. Jenni Allen, of Which?, said: ‘This strong action will come as a massive relief for all those regularly hit with such extortionate charges, which cost some people thousands a year.’ 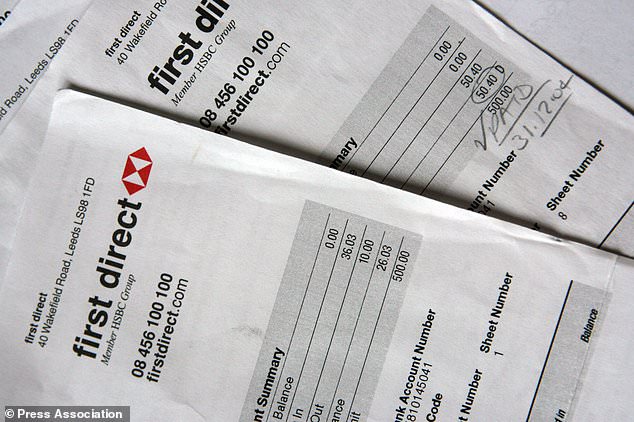 Reforms come after a the Daily Mail ran a campaign which opposed the fees. Stock picture shows bank statements

The FCA warned that daily fees mean some customers are effectively paying 20 per cent interest a day on their unarranged overdraft.

This is far higher than costs charged by payday lenders, which were capped at 0.8 per cent a day in a crackdown three years ago.

The watchdog is also planning to make banks and building societies offer online calculators showing customers how big an overdraft charge could be, and easy tools to check if they could get a cheaper overdraft from a rival. And it wants cash machines to show users if they are overdrawn.

Eric Leenders, of banking trade body UK Finance, said: ‘Helping customers to manage their everyday finances is a priority for the banking industry. We will consider today’s proposals carefully and continue to liaise with the FCA in the coming months.’

Customers are typically charged massive fees if they go overdrawn by just a few pounds. The biggest costs land on borrowers without an arranged overdraft. Fees can be as much as £80 a month – meaning some pay ten times more than they would for a payday loan.

Why are fees so high?

Overdrafts have not been heavily regulated up until now. It is estimated that banks raked in £2.4billion from overdraft fees last year, a third of everything they made on current accounts.

Customers who use an unarranged overdraft will not be charged more than for an arranged one. Fixed daily fees will be scrapped. Calculators will be added to bank websites so customers can test fees.

When will it happen?

It’s all out for consultation. In practice, rules drawn up by the FCA rarely change very much, and these are likely to be introduced in June.