Rising levels of carbon dioxide could be putting millions of people at risk for nutritional deficiencies, a new study has found.

Researchers say that high amounts of CO2 in the atmosphere decrease the concentrations of vital vitamins and minerals such as protein, iron, and zinc in crops.

In 2016, global emissions of CO2 reached record highs, measuring at 400 parts per million (ppm) for the first time in modern history. 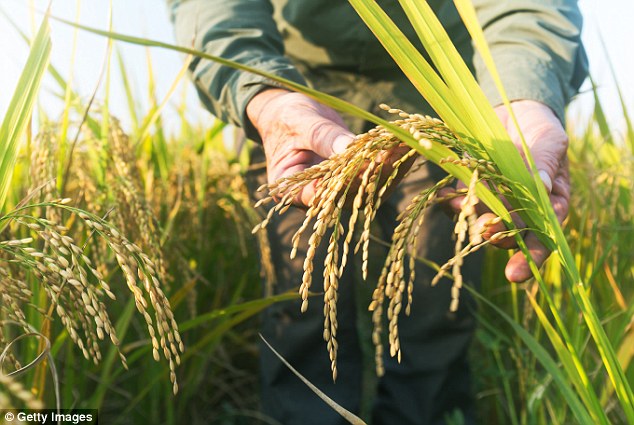 A new study from the Harvard TH Chan School of Public Health says the rising levels of CO2 are decreasing the amounts of protein, iron, and zinc in crops such as rice (pictured) and wheat

The mineral nutrient and trace element makeup of a plant is referred to as its ionome.

Many of these elements come from the soil the plant grows in, but they also come from the process of photosynthesis converting CO2 into carbohydrates and energy.

Past research has shown that when there are higher levels of CO2 in the atmosphere, the plant’s ionome suffers an imbalance.

Some theories include that theratio of carbohydrates to minerals is too high or that the way the minerals are used in the plant changes.

The Centers for Disease Control and Prevention (CDC) notes that this could present a problem because: ‘Micronutrients are not produced in the body and must be derived from the diet.’

Currently, two billion people – or 34 percent of the global population – are estimated to be deficient in at least one nutrient, putting them at risk of diseases and starvation.

However, concentrations of these three nutrients have been shown to be between three to 17 percent lower when they are grown in atmospheres where the CO2 levels are 550 ppm.

For the study, the team wanted to look at nutrient shifts due to CO2 emissions in 151 countries.

They created food supply data sets that were age-specific and sex-specific to estimate what the individual demographic impact would be for each nutrient across 225 different foods.

Previous studies have looked at the impact of CO2 on nutritional deficiencies, but with fewer countries and foods.

In the new study, the researchers found that when carbon dioxide readings hit 550ppm, as they’re expected to by 2050, about two percent of the global population – or 175 million people – could be zinc deficient.

In addition, about 1.3 percent of the population – approximately 122 million people – could be protein deficient.

Researchers also say around 1.4 billion women who are of childbearing age and children under five years old are at risk of iron deficiency and they could see their iron intake reduced by at least four percent.

According to the University of California San Francisco, close to 70 percent the body’s iron is found in a substance of red blood cells called hemoglobin.

Hemoglobin transports oxygen from the lungs to the rest of the body. If iron intake is low, then the body cannot produce enough red blood cells.

‘If we were having a beer talking about this 10 to 15 years ago, we would talk about ocean levels rising; that fundamentally makes sense. But no one would think of food being less nutritious,’ said Dr Myers.

The study found that countries in the regions of Southeast Asia, North Africa, and the Middle East would suffer significant impacts.

India, however, was found to be the country that would be the most impacted from this nutrient deficiency.

‘But they are more insulated from this compared to poorer countries.’

Dr Myers says that while the most direct thing that can be done is to reduce our carbon emissions, there are other courses of action.

‘There is also breeding crops that are less sensitive to these CO2 levels. For example, some rice cultivars (varieties) have less reductions that are less dramatically affected.

‘So there are a myriad of different ways of research. We’re not making a catastrophic announcement but a call to action.’