Rising inflation threatens to dampen consumer confidence and people’s willingness to splash out once lockdown is lifted, report warns

Higher prices at the shops could dampen consumer confidence in the months to come, a new report has warned.

Many people who have been dining out, buying ice creams by the beach, staying in hotels, drinking at a pub or buying food in a supermarket are forking out more cash than they would have at the same destination a few months ago.

On Thursday, top brass at the Bank of England revealed they think inflation will rise above 3 per cent by the end of the year, before dropping back next year as the post-Covid boom slows.

Concerns: Worries about the state of the economy amid higher inflation, GfK said

Inflation has increased in recent months, with figures from the Office for National Statistics estimating that it reached 2.1 per cent in May, which is slightly above the Bank’s 2 per cent target.

Former central bank governor Mervyn King thinks the problem of rising inflation looks set to linger and will be more problematic than some imagine. He thinks monetary and fiscal stimulus measures are ‘out of all proportion to the magnitude of any plausible gap between aggregate demand and potential supply’.

Sarah Coles, a personal finance analyst at Hargreaves Lansdown, said: ‘Inflation is set to go above 3 per cent this summer, dealing yet another horrible blow to savers.

‘Right now, however long you’re prepared to fix your savings for, you can’t get more than 1.65 per cent.’

While inflation is on the rise, at present, consumer confidence levels have remained resilient this month, despite the Government delaying the lifting of all remaining lockdown restrictions until July, according to GfK. 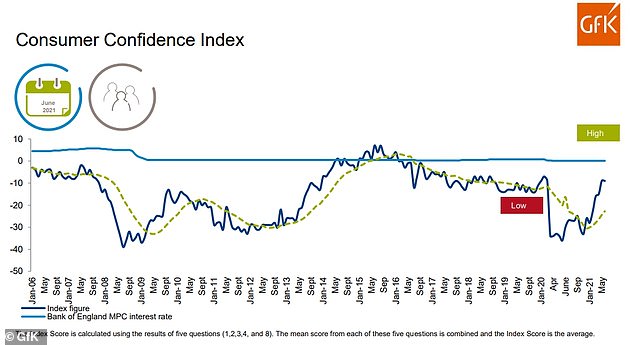 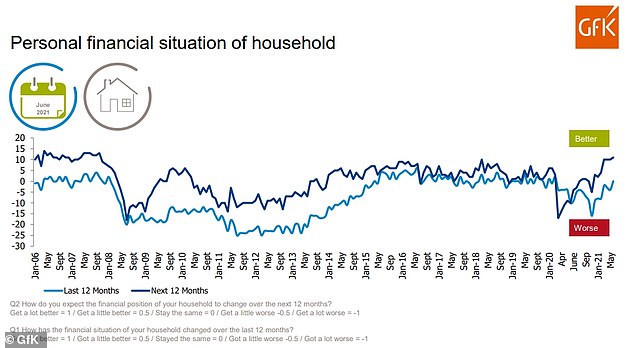 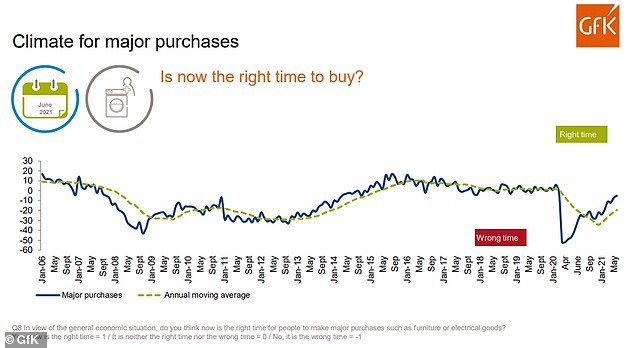 What will you do? GfK’s chart showing people’s sentiments about making major purchases

GfK said overall consumer confidence remained unchanged over the last month at minus nine. But, this is up significantly from minus 30 in June last year. The country’s rapid vaccine rollout and people’s desire to get out and about has helped keep consumer sentiment on track.

But, there was a six-point drop in the measure for the wider economy in the coming year amid forecasts for rising retail price inflation.

However, people’s confidence in their own personal finances, over the past year and for the year ahead, remains strong, GfK said.

The major purchase index, an indicator of confidence in buying big ticket items, also improved for the third consecutive month to minus five, which is 27 points higher than it was at the same point a year ago.

Joe Staton, client strategy director at GfK, said: ‘A repetition of last month’s score doesn’t mean confidence is about to nose-dive. The upwards trajectory for the index since the dark days at the start of the pandemic is currently still on track.

‘However, forecasts for rising retail price inflation could weaken consumer confidence quickly and that may account for the six-point dip in June in our measure for the wider economy in the coming year.

‘On a more positive note, we have strong numbers for our personal financial situation, both for the past year and the year to come. In addition, this month’s further improvement in the major purchase index – the third month in a row – could see shoppers spending in anticipation of a staycation summer.’

Cash stash: A chart from GfK showing people’s sentiments about saving over time