Surgery patients can now discover if they are at risk of severe scarring after their operation – thanks to a simple mouth-swab DNA test.

The first-of-its-kind screening takes less than a minute and is completely risk-free.

After a week, the results are ready, and can indicate whether there is a low or high chance of an abnormal scar developing.

Scars are a natural sign of skin repair. As a wound heals, chemicals are released that trigger the formation of new blood vessels and skin cells, closing the wound and preventing infections from entering.

Although they may be red and raised to begin with, over time most become pale, flat and almost invisible. This process can take up to two years.

Some scars remain raised and may widen – known as a hypertrophic scar – usually due to stress or damage to skin during the healing process.

However, in a minority of patients, the healing process occurs in an abnormal way and there is an overproduction of the skin protein collagen, resulting in what is known as a keloid scar.

These scars are red, thick and raised, and may be far larger than the original wound.

They may also be itchy, tender and even painful – although the biggest concern of most patients is that they can be disfiguring.

Even tiny wounds can trigger the process, which occurs over a number of years after the initial trauma.

Certain ethnic groups – those of Irish, African and Caribbean descent in particular – are far more likely to suffer, and although keloid scars sometimes run in families, often they can happen spontaneously.

Now, French medical company BILHI Genetics has become the first to develop a test that, it says, is able to identify genes linked to a risk of keloid scars.

The Bilhi Skin Keloid test is carried out by a doctor, and involves using a simple mouth swab kit. A small plastic wand, with a cotton pad on the end, is rubbed across the inside of the cheek. This is then sealed in a packet and sent by post to the BILHI lab for analysis. Results are returned to the doctor within seven to ten days.

Patients are told whether they have either a low risk (two times less likely than the general population) or a high risk (eight times more likely) to develop a keloid. 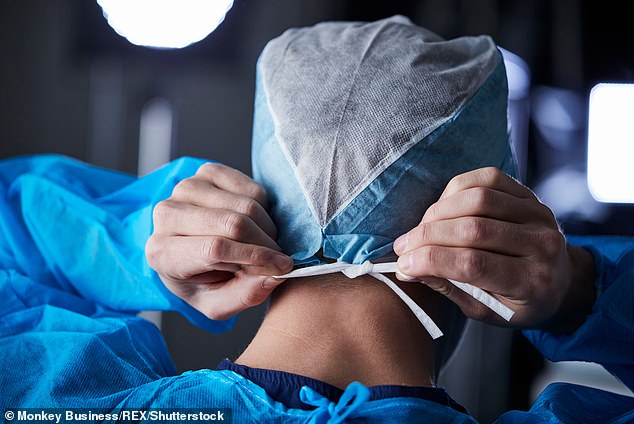 After a week, the results are ready, and can indicate whether there is a low or high chance of an abormal scar developing (stock image)

‘The idea is to offer this to patients before they choose to undergo an operation,’ said London-based plastic surgeon Mr Olivier Amar, the first to offer the test in the UK.

‘This way, we will be able to monitor the wound as it heals.

‘If it looks like a raised keloid scar is developing, there are steps we can take to minimise the problem.

‘Trying to tackle a keloid scar after it has developed is very difficult, and may involve further surgery.’

Currently, patients with raised keloid scars are offered a variety of treatments.

Freezing early keloid scars with liquid nitrogen may stop them growing, and laser treatment can reduce redness – although this will not make the scar any smaller.

For more severe keloids, surgery involving cutting out the abnormal tissue, sometimes followed by radiotherapy, may be an option. However, this can result in worse scarring than before.

Patients may even be offered chemotherapy drugs, which halt the growth of rapidly dividing cells, along with steroids.

Far better, though, is to try to prevent the keloid developing in the first place, said Mr Amar.

‘If we suspect a keloid scar is developing, we can give injections of Botox or anti-inflammatory drugs, which help minimise redness and overgrowth of tissue,’ he explained. ‘Covering the healing scar with an adhesive silicone sheet, or silicone gel is also useful, and can make sure the skin remains flat.

‘It’s important people know there are preventative steps that can be taken, as these scars can really affect self-confidence.’

The company hopes the test, which costs about £350 to carry out privately, will one day be offered to selected patients on the NHS.