‘Risky drinking’ is found to increase among women in their 50s and 60s, study reveals

Women are found to partake in ‘risky drinking’ as the age, study reveals.

Researcher found that women in their 50s and 60s are consuming more alcohol than what is deemed safe for their age.

Their report, published in the journal of Sociology of Health & Illness, found that the participants were more likely than women in their 20s and 30s to drinking at levels exceeding low-risk drinking guidelines.

The subjects said they were aware of the health risks that come with drinking excessively, but are not concerned about overdoing it as long as they stay in control and do not embarrass themselves in public.

A study of women ages 50 to 69 found levels of heavy drinking higher than among younger women. ‘When you get to our age, you should be able to do pretty much what you want if it doesn’t hurt other people and it’s not too detrimental to you,’ one 57-year-old said

Researchers at Edith Cowan University investigated alcohol use among 49 women between the ages of 50 and 69 in Denmark and Australia.

Denmark’s Board of Health says women shouldn’t have more than seven drinks per week.

Exceeding the two-drink recommendation considerably increases the long-term risk of disease and premature death, but most participants were more concerned with behaving respectably while drinking.

Some felt healthy activities, like exercise, ‘neutralized’ those health risks.

‘Respondents from both countries indicated that alcohol use among women their age was normal and acceptable,’ said lead author Julie Dare, a professor at Edith Cowan University’s School of Medical and Health Sciences in Perth.

‘However, the importance of ‘staying in control’ while drinking emerged as an important qualifier to the social acceptability of drinking.’ 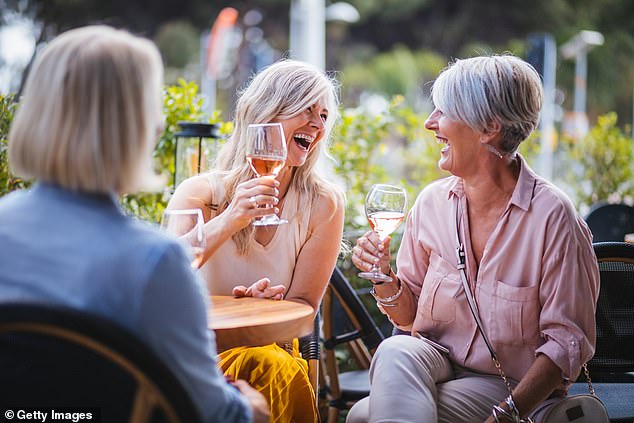 In recent years, shows like Cougartown, Grace and Frankie and the Real Housewives franchise have celebrated alcohol consumption by middle-aged and senior women.

‘It has become part of the norm,’ said one 59-year-old study participant. ‘It is something we do with our acquaintances, friends and families. That’s just something we do’

While Australia puts the cap on low-risk drinking at two glasses, Denmark suggest no more than one drink a day for women.

About a third of the Danish women drank alcohol three to four days a week, as did a quarter of Australian participants.

While none of the Danish women drank daily, nearly 30 percent of the Australian women did.

‘When you get to our age, you should be able to do pretty much what you want if it doesn’t hurt other people and it’s not too detrimental to you,’ one 57-year-old said.

One 69-year-old participant said her peers saw their drinking as fine, ‘as long as they don’t make a fool of themselves.’

‘They don’t want to go falling down and showing their knickers,’ she said.

An NHS survey in the UK generated similar results, with high-risk drinking most common among women ages 55 to 64.

Only 44 percent of British women under 35 reported drinking at least weekly, according to the alcohol-education group Drinkaware, compared with 52 percent of those 35 to 54 and 58 percent of people over 55.

The results among Danish and Australian women were similar except when it came to drinking to cope with stress.

Danish participants ‘believed that you shouldn’t use alcohol as a crutch to cope,’ Dare said.

But the Australian women felt it was acceptable to drink if they were distressed.

‘They were quite open about this, saying ‘I just had a bad day, I needed to have a drink’,’ Dare said.

While Australian women aged 18–24 remain most likely to binge drink – defined as four or more drinks in a few hours – the percentage has steadily decreased since 2010.

Conversely, the percentage of female binge-drinkers over 60 years has increased since 2010.

Some of all that tippling may be the result of peer pressure: A recent Drinkaware survey found that one in five people over age 55 felt pressured into drinking more than they otherwise would have.

‘Whether it’s topping up someone’s glass without asking, encouraging a group to buy in rounds or incorporating drinks into social rituals, peer pressure comes in many guises,’ said researcher Emma Catteral.

‘Our study shows that being older doesn’t make us immune to the peer pressure to drink. In fact, it suggests we actually just don’t recognize pressurizing behaviors.’

But even during lockdowns, when socializing was presumably curbed, heavy drinking rose sharply, especially among women.

Researchers from the RAND Corporation found that, in late May, binge drinking in the US soared more than 40 percent among females over the same period last year.

According to Nielsen, alcohol sales rose 54 percent at the end of March, when lockdowns began in most states, and online sales rocketed up 262 percent.

‘It’s no surprise people are drinking more during the pandemic,’ said therapist Prairie Conlon. ‘Many people use alcohol as a way to self-soothe anxiety or depression, two mental health conditions I’ve seen more of during COVID-19.’

Alcoholism is the most severe form of alcohol abuse and involves the inability to manage drinking habits.

It is organised into three categories: mild, moderate and severe. Each category has various symptoms and can cause harmful side effects.

If left untreated, any type of alcohol abuse can spiral out of control.

Individuals struggling with alcoholism often feel as though they cannot function normally without alcohol.

This can lead to a wide range of issues and impact professional goals, personal matters, relationships and overall health.

Sometimes the warning signs of alcohol abuse are very noticeable. Other times, they can take longer to surface.

When alcohol addiction is discovered in its early stages, the chance for a successful recovery increases significantly.

Common signs of alcoholism include:

For instance, drinking can impact your reaction time, causing you to have slow reflexes and coordination.

That’s why drinking and driving is extremely dangerous. Getting behind the wheel of a car can alter your perception of speed and distance, putting yourself and others at risk.

Additionally, consuming too much alcohol can affect your long-term health. Some side effects may lay dormant for years before they surface.

Because of this, professional medical care is required for proper diagnosis and treatment.

There are different forms of treatment available based on frequency and severity of alcohol abuse.

Recovering from alcohol addiction is a process that continues long after rehab.

It takes commitment to practice and apply the techniques you learn in rehab, counseling, support groups and other types of therapy.

Although every individual will have their own recovery plan that’s tailored to their specific needs, treatment generally follows a structure.

Alcohol treatment is broken into three sections, consisting of:

The first stage in alcohol addiction recovery is detoxification. This phase should be completed with the help of medical professionals due to the potential for serious, uncomfortable withdrawal symptoms. Many times, individuals are given a medication to help alleviate the painful side effects of a withdrawal.

There are two types of rehabilitation that help treat alcoholism: inpatient rehab and outpatient rehab. Inpatient rehabs are intensive treatment programs that require you to check into a facility for a certain period of time, usually 30, 60 or 90 days. Outpatient rehab allows individuals to participate in a recovery program while continuing with their daily life. Talk with your doctor about treatment options to determine which form of recovery will best fit your needs.

The recovery process doesn’t end with the completion of rehab. Long-term sobriety requires ongoing therapy and may entail support groups, counseling and other recovery resources. These will make sure you maintain sobriety and continue on a happy, healthy path for months and years to come.