Rita Ora is leggy in rainbow minidress at Vogue bash

She recently returned from Kosovo following a triumphant performance at their independence celebrations.

And Rita Ora was dressed to impress again as she made a leggy arrival at the Vogue Fashion and Film party at Annabel’s private members’ club in London’s Mayfair on Sunday night.

The singer, 27, sported a multi-coloured sequin mini-dress as she arrived at the party in the capital, with her blonde hair tied back in a curled chignon.

Shady lady: Rita Ora was dressed to impress as she made a leggy arrival at the Vogue Fashion and Film party at Annabel’s private members’ club in London’s Mayfair on Sunday night

Rita showed off her slender pins in the rainbow mini-dress covered in an array of beads and sequins as she exited her vehicle.

The Anywhere hit-maker covered up with a long black overcoat as she made her arrival at the party, accessorising with black strappy heels and a collection of gold chunky earrings, bracelets and a chain necklace.

Rita kept her blonde tresses out of the way with a messy yet still stylish chignon, while her glowing complexion was on full display with a dramatic smoky eye and defined brows.

Inside the A-list party, Rita seemed to be having a ball as she boogied up a storm in front of the cameras, before rocking a pair of tiny sunglasses as she headed home for the evening.

Leggy lady: The singer, 27, sported a multi-coloured sequin mini-dress, teamed with towering heels as she enjoyed her night out on the town 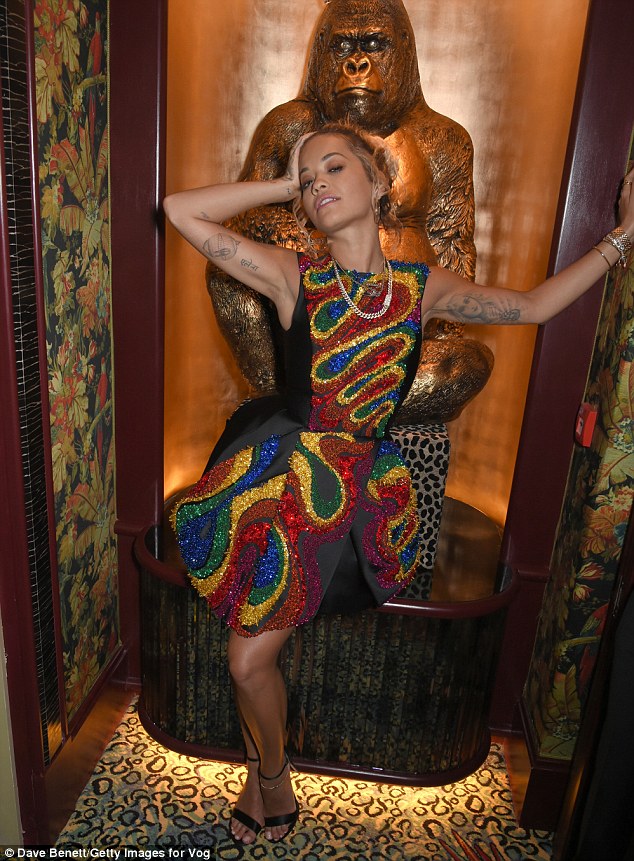 Boogie nights: Inside the A-list party, Rita seemed to be having a ball as she boogied up a storm in front of the cameras 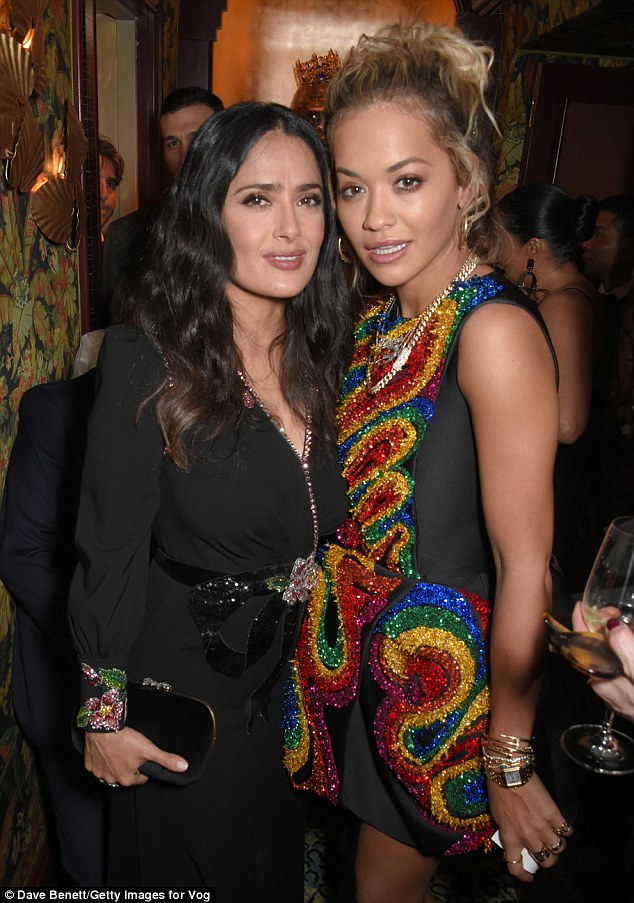 A-list pals: Rita was seen chatting to actress Salma Hayek inside the bash, with the Hollywood A-lister heading straight to Annabel’s after the BAFTAs earlier in the evening 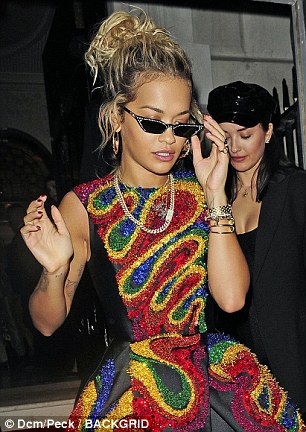 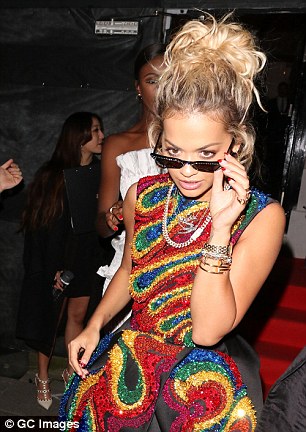 I see you: Rita wore a pair of tiny dark shades, in spite of it being pitch black outside

Rita was seen posing up a storm at the star-studded celebrity bash, which was also attended by some of the hottest fashion stars of the moment.

The stylish songstress also posed with her stylish and designer Kyle De’Volle who made a statement in red corduroy co-ords.

Rita recently returned to the UK following a celebratory gig in Kosovo to celebrate the 10th anniversary of the country’s independence. It’s party time: The pop princess looked as though she was having a ball as she partied the night away inside the star-studded fashion and film bash Homeward bound: Rita looked lovely as she made a dignified exit from the party 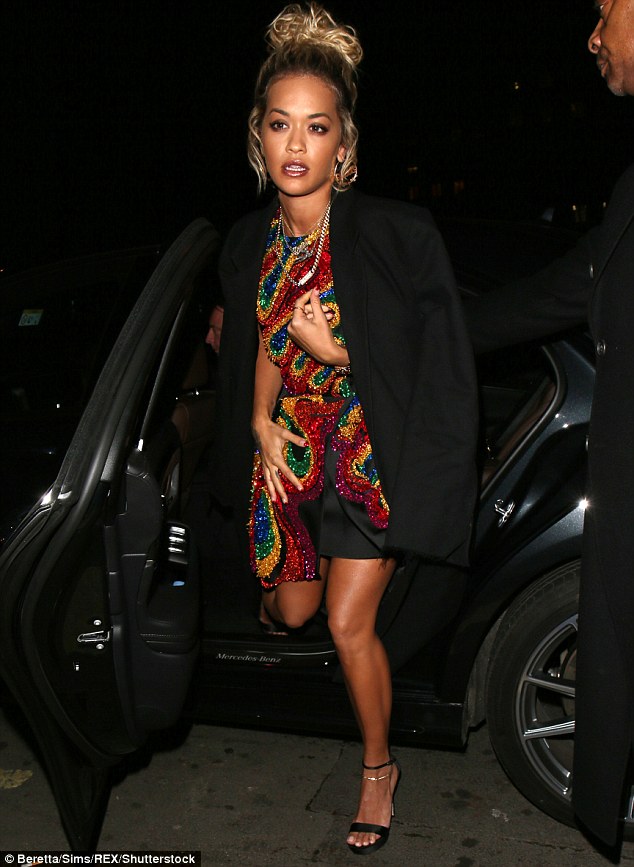 Legs for days: Rita made a stylish exit from her car as she arrived at the star-studded party

Rita still managed to give fans a behind the scenes look at her racy costume for her Kosovo gig, posting some sexy snaps on Instagram.

And despite her incredible curves taking centre stage, Rita also joked that fans could see her tan lines, as one snap showed the obvious marks on her slender back.

In the scantily-clad snaps, Rita could be seen rocking the crimson and black sequinned body suit, which showed both her washboard abs and her pert derriere, as she posed in front of a mirror. 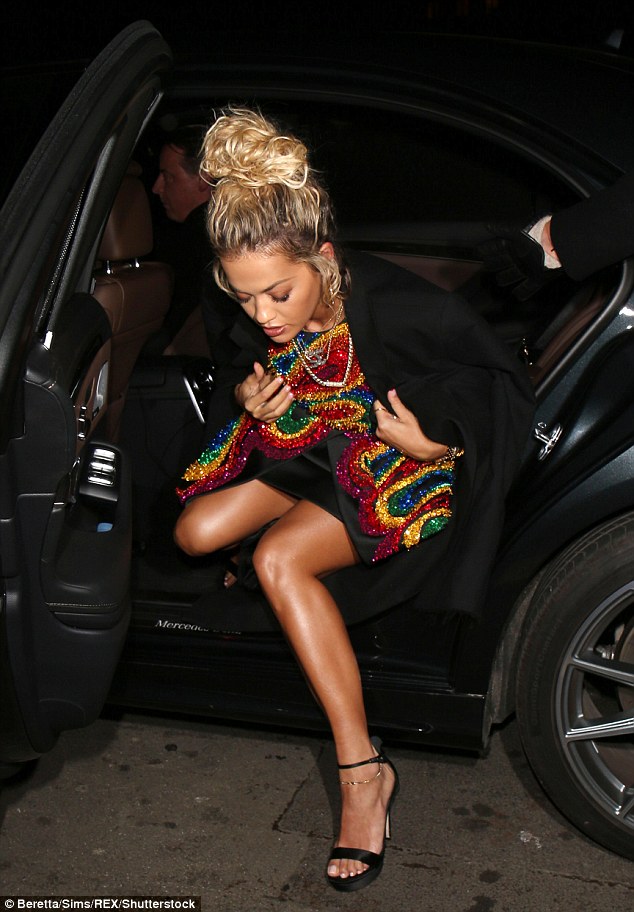 Gorgeous: Rita made an elegant exit from her car in the multi-coloured frock in a dress that was covered in an array of coloured sequins and beads

Dramatic: The Anywhere hit-maker kept warm as she arrived at the party in Annabel’s club by sported a black overcoat 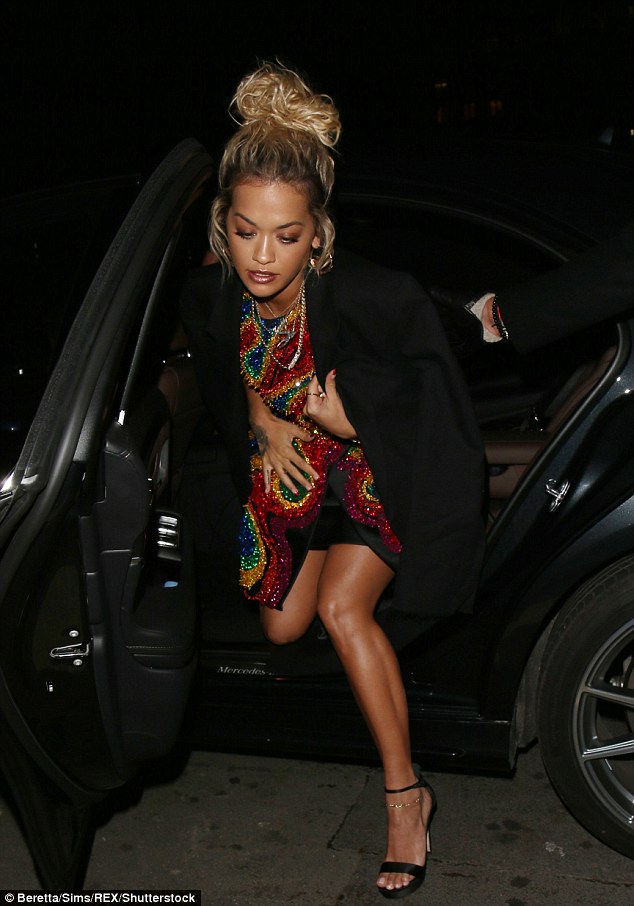 Amazing: Rita sported an array of gold chunky jewelery as she made her arrival at the party, including bracelets, earrings and a chain necklace 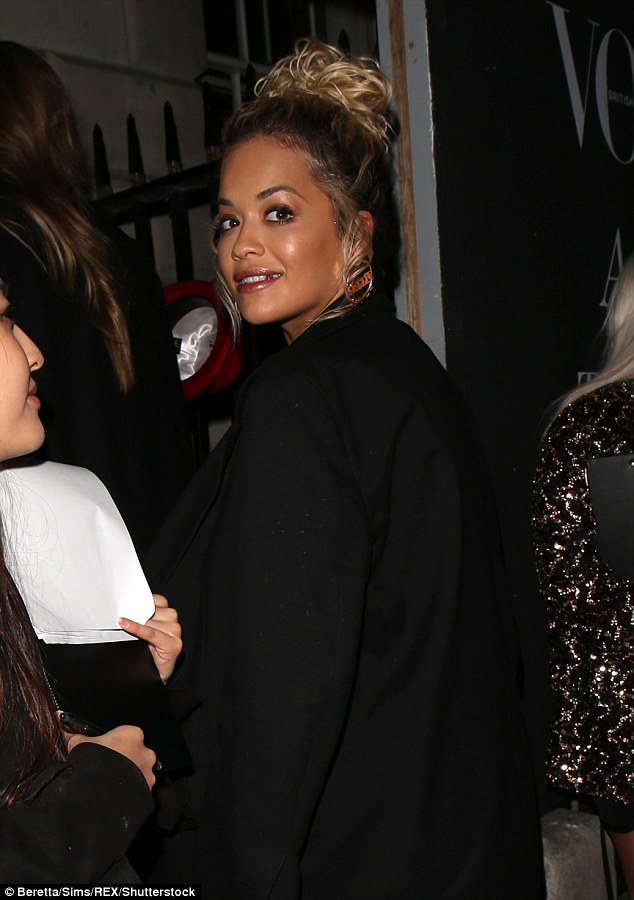 Glowing: Rita had her glowing complexion on full display, sporting a bronze smoky eye and defined brows, along with a nude lip

Rita appeared to be prepping for her big performance during her visit to Kosovo, which celebrated ten years since the country became independent from Serbia.

In a second snap Rita’s back was on full display, showing off her bra tan lines, though the beauty appeared to take note as she captioned the post.

Rita wrote: ‘TaN Lines – BTS – thank you @kyledevolle and @bang__london for making this incredible piece for me.’

Rita had donned the revealing look as she took to the stage in Kosovo’s capital Pristina on Saturday, teaming her leotard with a matching bomber jacket. 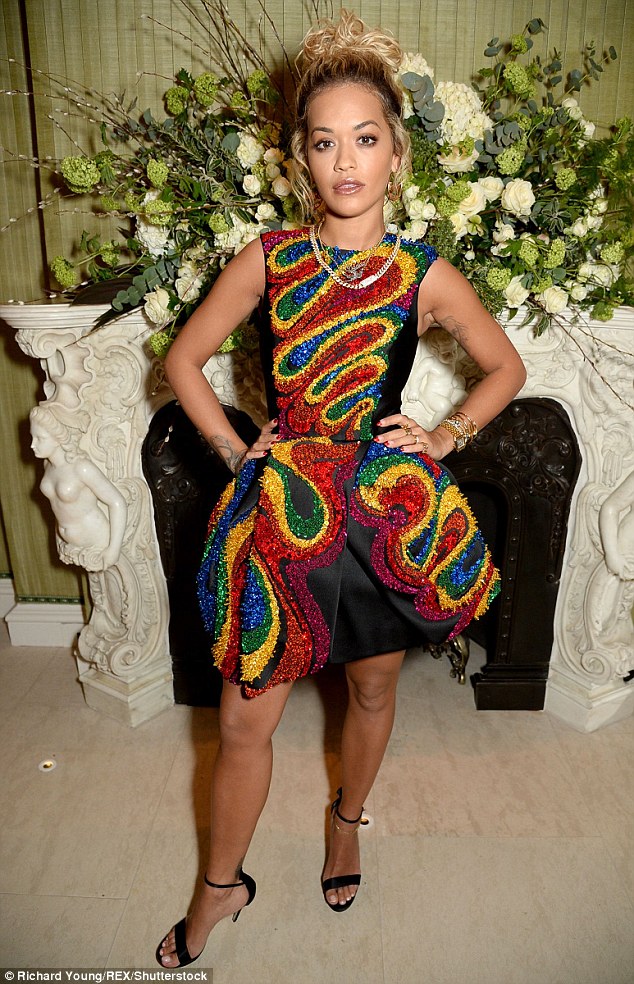 Leggy: Rita continued to show off her slim legs in the colourful frock, as she joined the finest in fashion for the bash 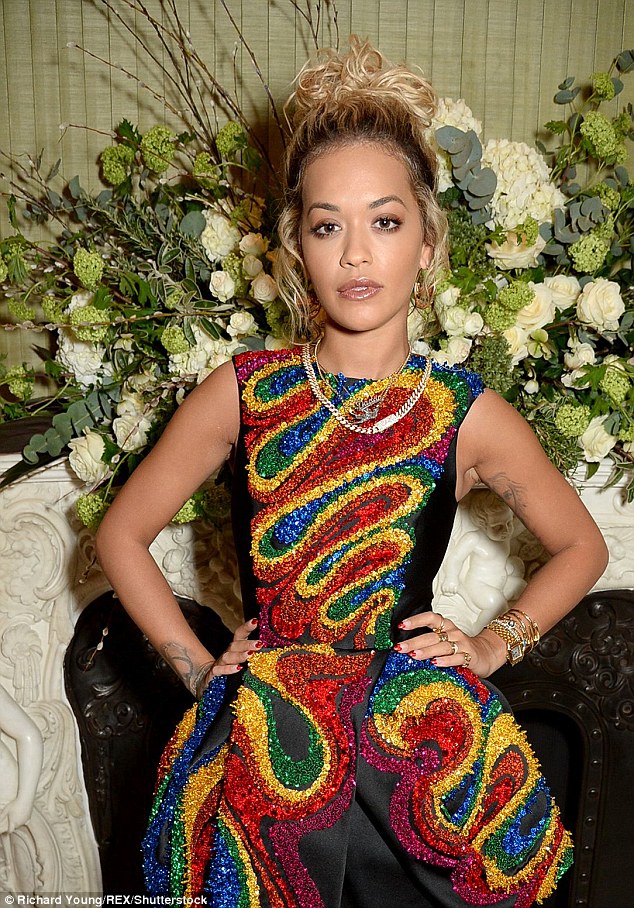 Glowing: The singer recently returned from Kosovo, following a triumphant performance in the country to celebrate the 10th anniversary of its independence 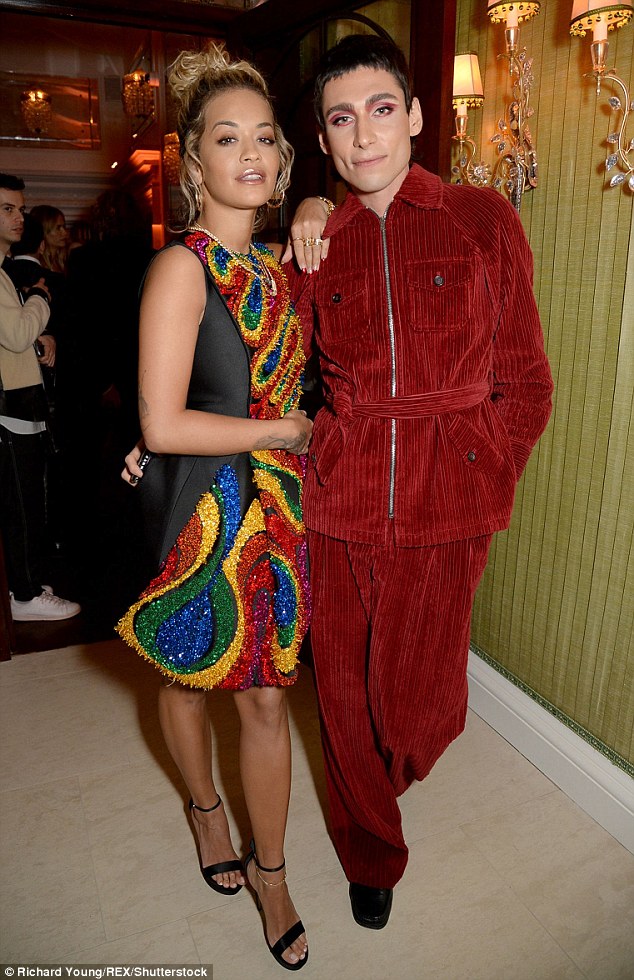 On point: Rita posed up a storm with stylist and fashion designer Kyle De’Volle who rocked red corduroy co-ords

Rita looked ever the pop sensation as her signature blonde locks billowed along with her dance moves.

Clearly beaming with pride, the Kosovan-native confidently strut her stuff on stage to the packed-out capital city, with thousands of people lining the streets to celebrate.

The pop star incorporated traditional Kosovan dances into her hit tune Black Widow, while addressing the crowd in her native tongue.

Rita was named an Honorary Ambassador to Kosovo in 2015, and met up with prime minister Ramush Haradinaj before she headlined the open-air evening concert. 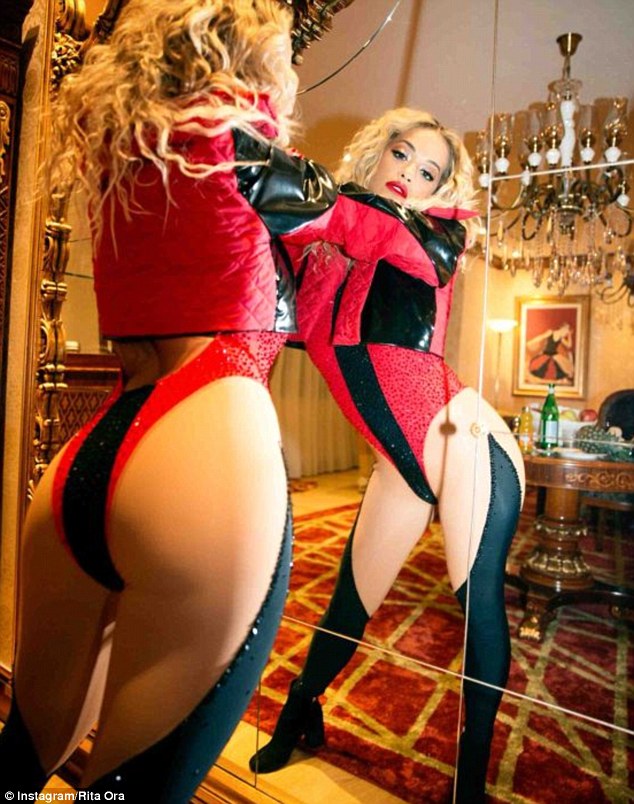 Revealing: Rita was keen to show off her racy red and black bodysuit on Saturday, as she posted some racy behind the scenes snaps of her look from her concert in Kosovo 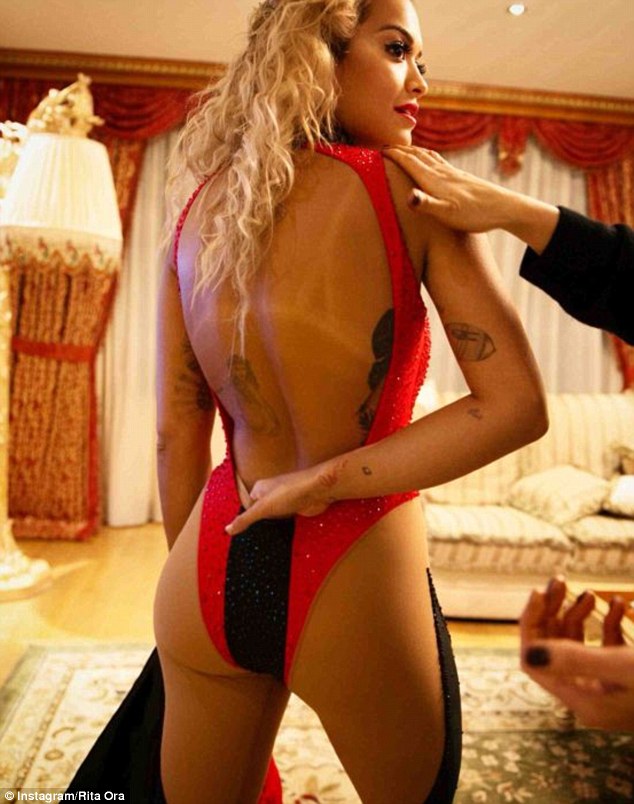 Racy: Rita accidentally flashed her tan lines in one of the scantily clad snaps, though she appeared to take note as she captioned the post: ‘TaN Lines – BTS’ 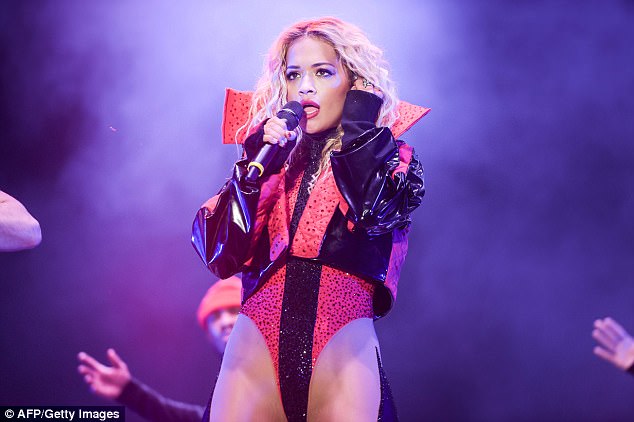 Showstopping: Rita donned the revealing look as she took to the stage for an open air concert in Kosovo to celebrate ten years since the country became independent from Serbia