Celebrities including Rita Ora, Liz Hurley and Nick Grimshaw have sparked a £1million bidding frenzy as wealthy bidders try to snap up memorabilia from London’s poshest nightclub this evening – with more than half the lots still set to be sold.

The contents of Annabel’s, which hosted the likes of Frank Sinatra to John Wayne and Naomi Campbell to the Queen, have gone under the hammer this evening after its venue in Mayfair was closed.

Among the items to go under the hammer at Christie’s in London include dining sets, bar mirrors and the iconic red velvet corner sofa on which Hurley once posed.

A world record price for a Glyn Warren Philpot piece was set for his portrait of Henry Thomas, costing the buyer £368,750. Among the other high-priced items to have been sold so far include the painting ‘Study of a grey horse’ by Sir Alfred James Munnings which fetched £242,750 – more than sixteen times its its pre-sale low estimate of £15,000. 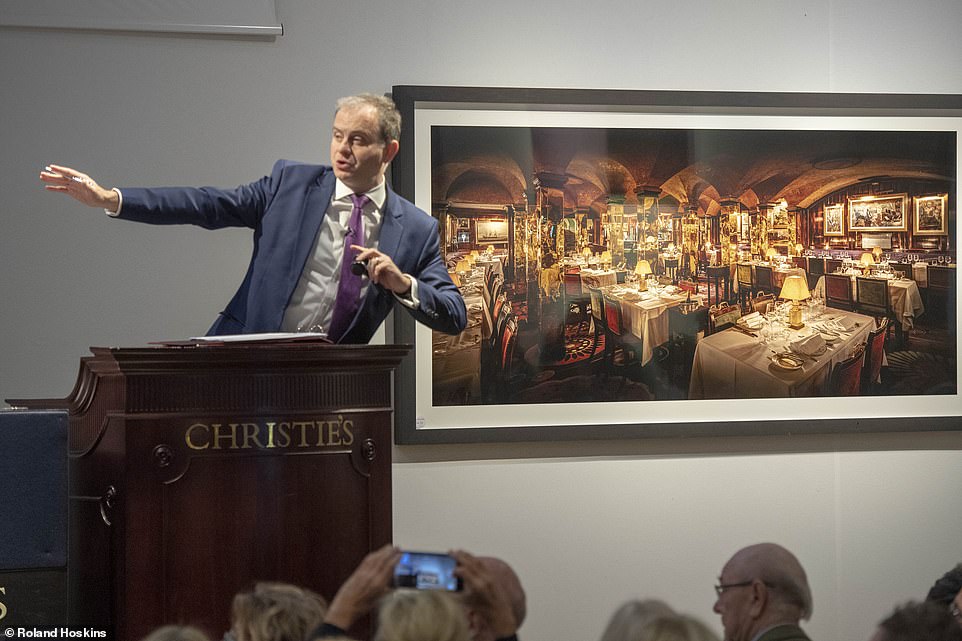 The contents of Annabel’s, which hosted the likes of Frank Sinatra to John Wayne and Naomi Campbell to the Queen, are on sale after its venue in Mayfair was closed 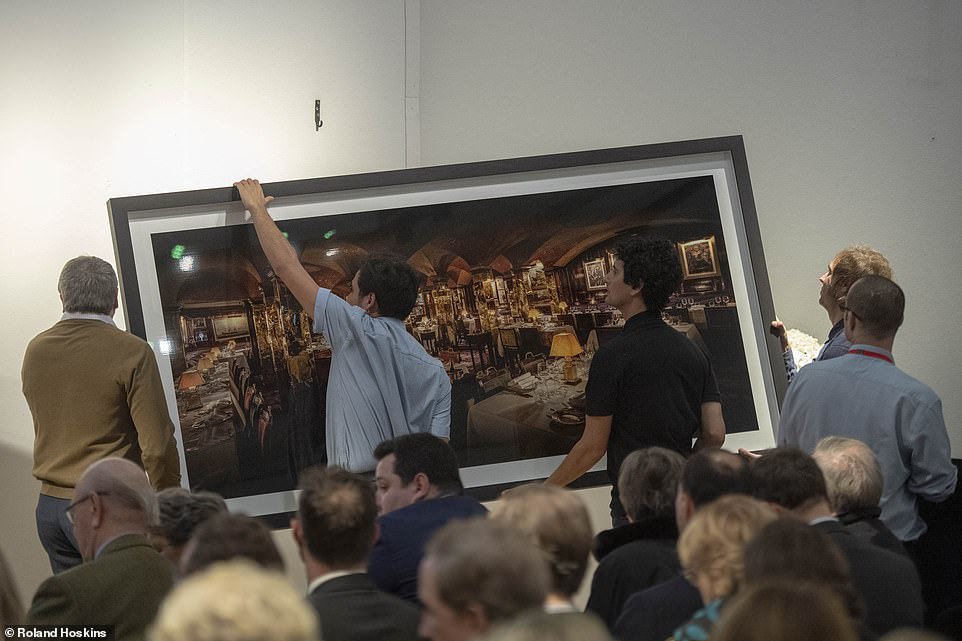 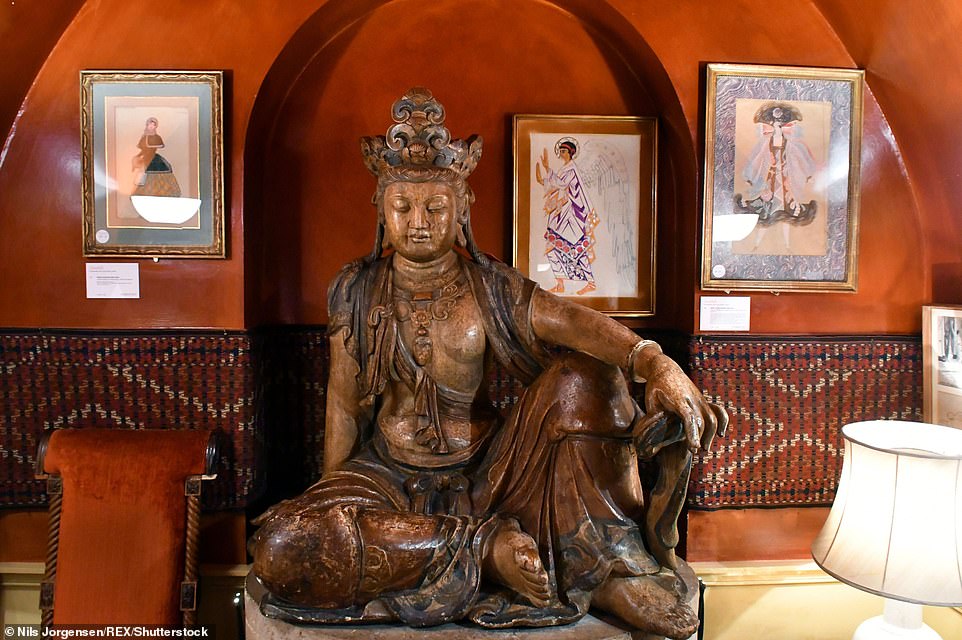 Rita Ora is expected to bid on the Bodhisattva, a 4ft tall carved wooden Buddha which has a guide price of £10,000 to £20,000, and was in the Buddha Room at Annabel’s nightclub 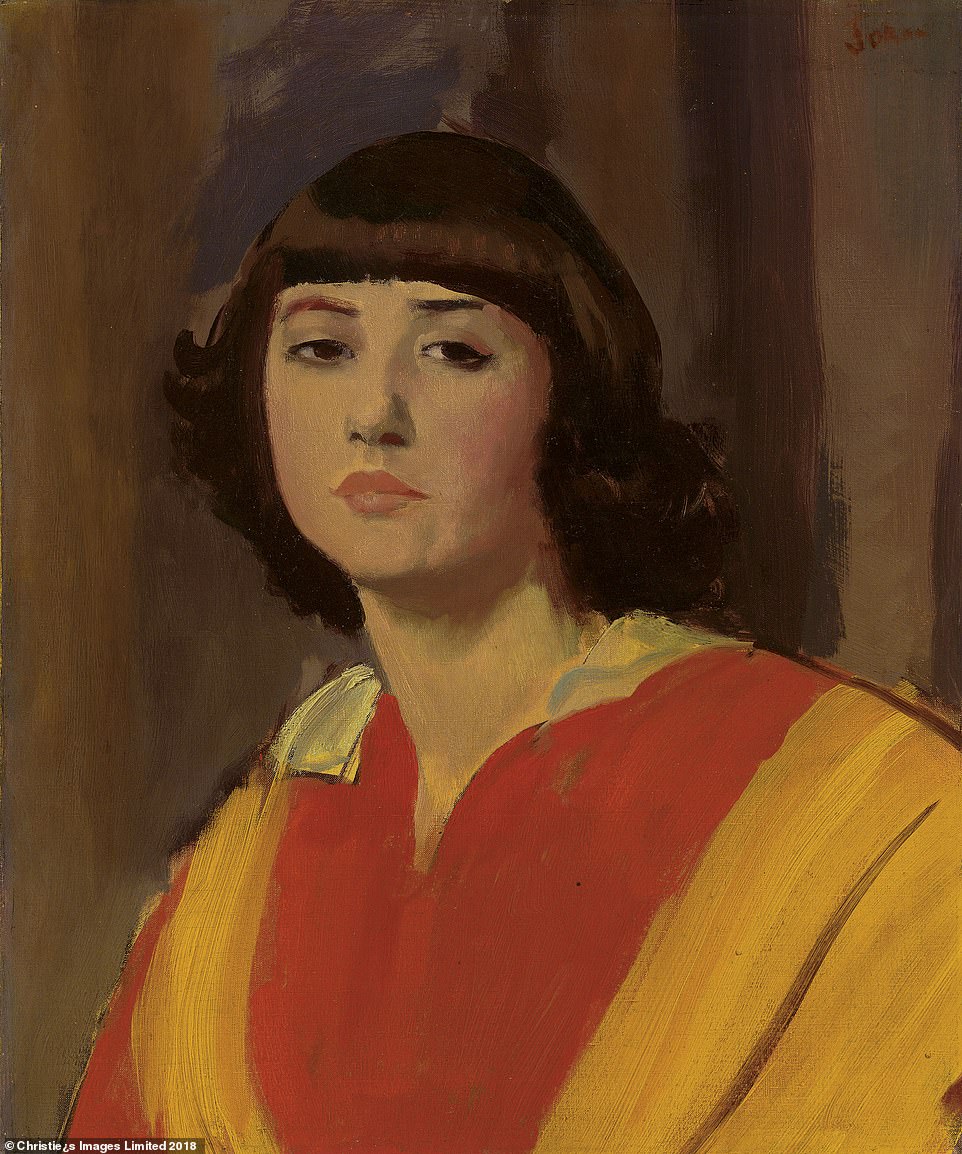 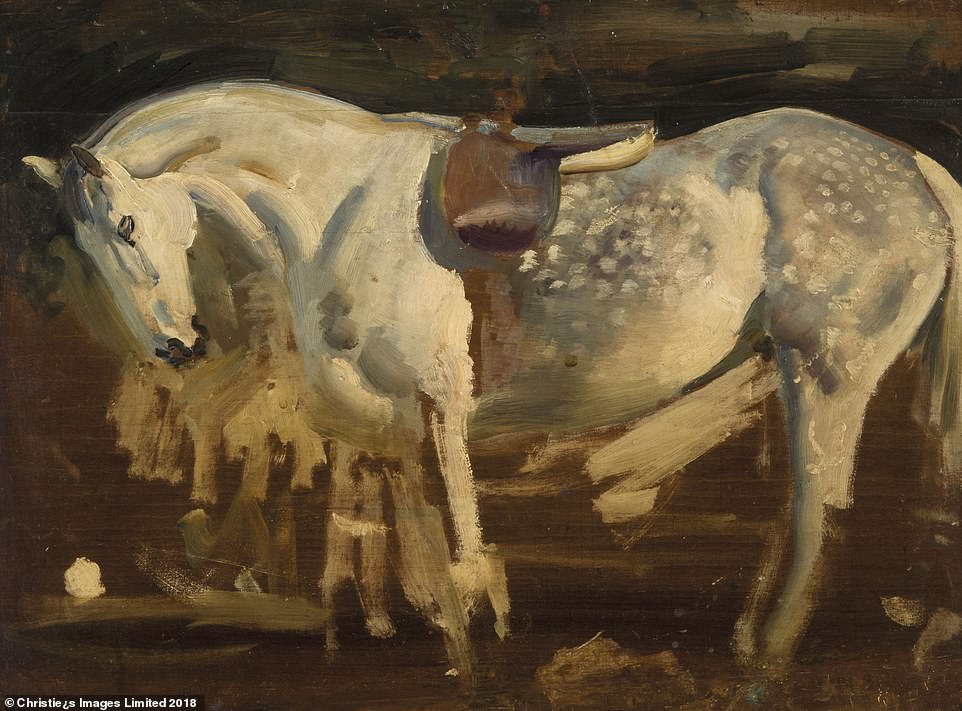 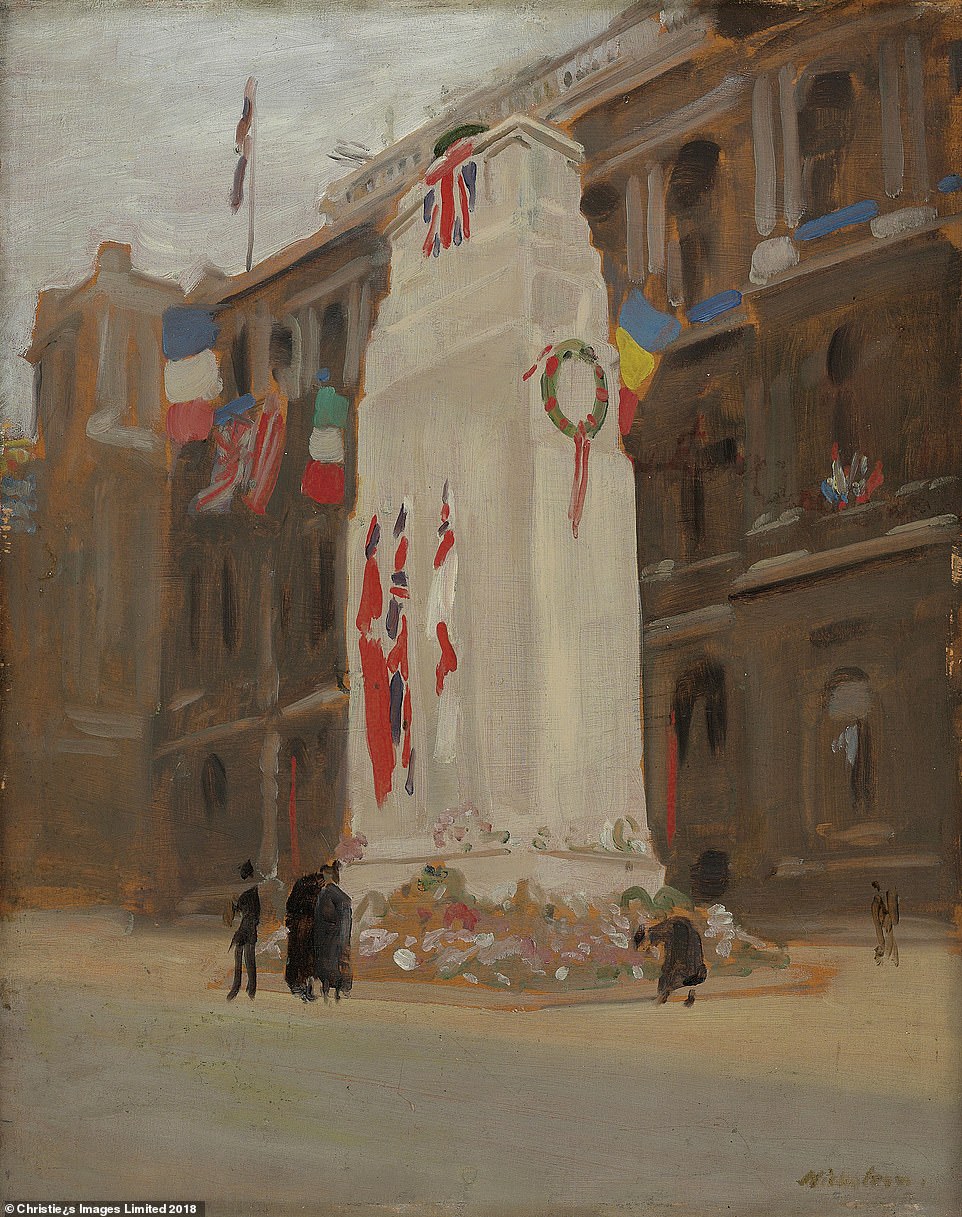 Lot number 33 was Sir William Nicholson’s painting of The Cenotaph, The Morning of the Peace Procession. The piece was painted in 1919 and was estimated to fetch £50,000-80,000 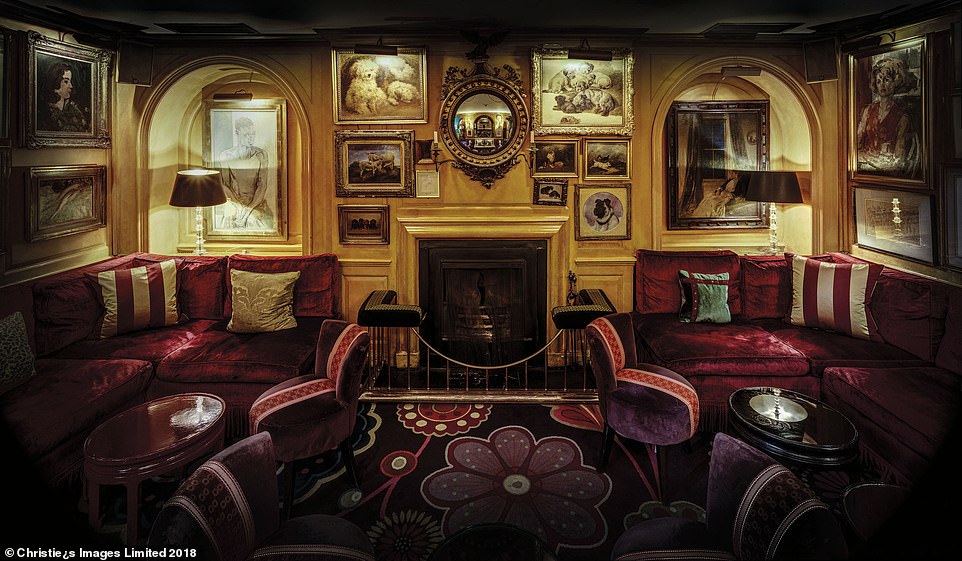 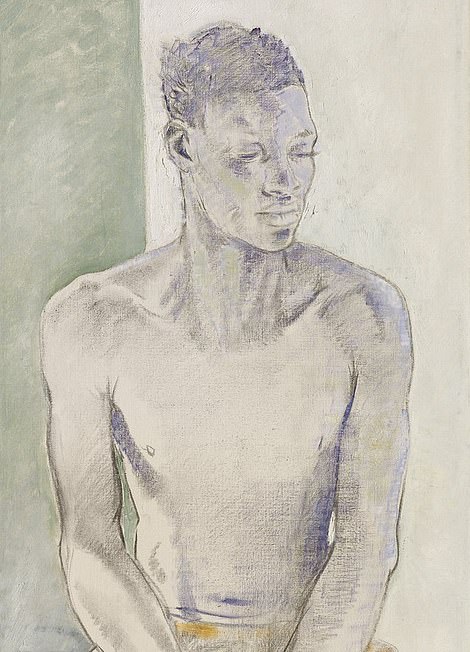 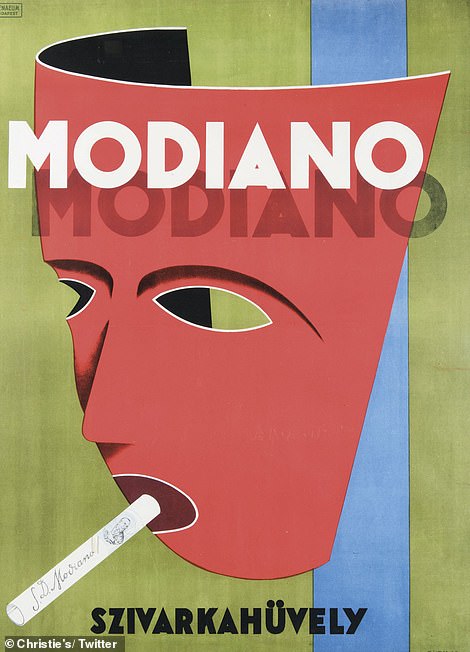 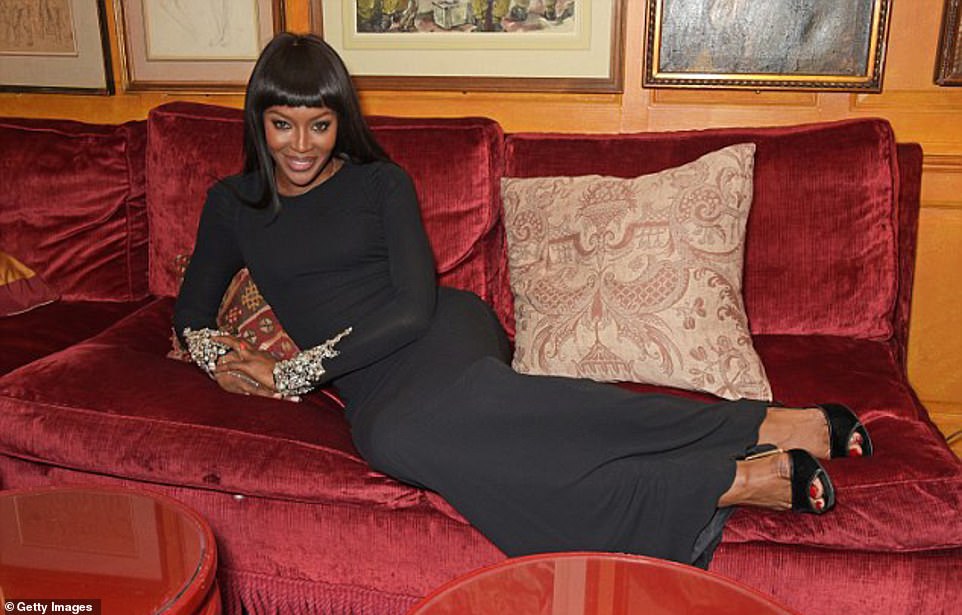 Supermodel Naomi Campbell, reclining on the famous red velvet sofa in 2015. Liz Hurley is expected to bid on piece of furniture which goes under the hammer today at Christie’s 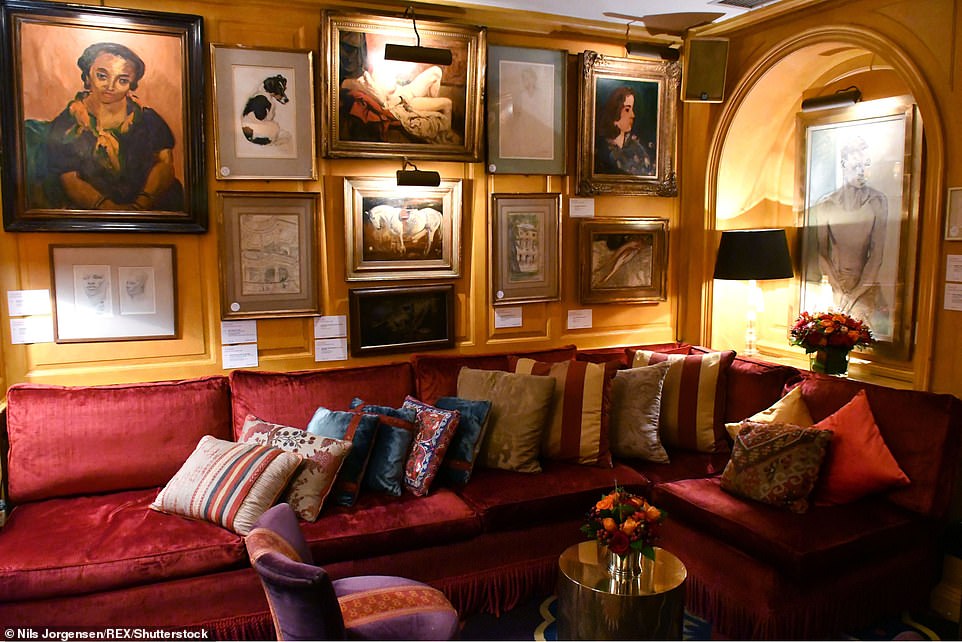 The Fireplace Bar at Annabel’s, which had been open at 44 Berkeley Square since 1963

Singer Rita Ora said she was planning to bid for a 4ft tall carved wooden Buddha, which had a guide price of £10,000 to £20,000, reported The Guardian. Whether or not she got her hands on the item remains to be seen, although the Buddha was sold for a staggering £137,500.

From the danceroom floor to £300,000 paintings: Just some of the 250 items to go under the hammer

The sales of the lots so far have taken the total raised by the auction to more than £1million, with more items still set to be sold.

A world record price at auction was also achieved for Richard Young’s ten black and white photographs taken at Annabel’s, which were sold for £11,875.

Quirky items like a doorman’s coat were estimated to fetch up to £600 but eventually went for £1,875. Other items which blew their estimate prices included the painting ‘Modiano’ by Andreas Farkas, which sold for £193,750 despite being predicted to go for £1,500.

BBC Radio 1 DJ Grimshaw – who was also a regular at the venue – was aiming to bid for the dancefloor oak planks, which are on sale for £300 to £500.

Ora, 27, said she could ‘only imagine what that Buddha has seen over the years’ – while Grimshaw, 34, recalled ‘watching Grace Jones hula-hoop’ across the floor.

The sale also featured a table with eight dining chairs with red and green upholstery, a circular restaurant table, a table lamp and eight place settings. 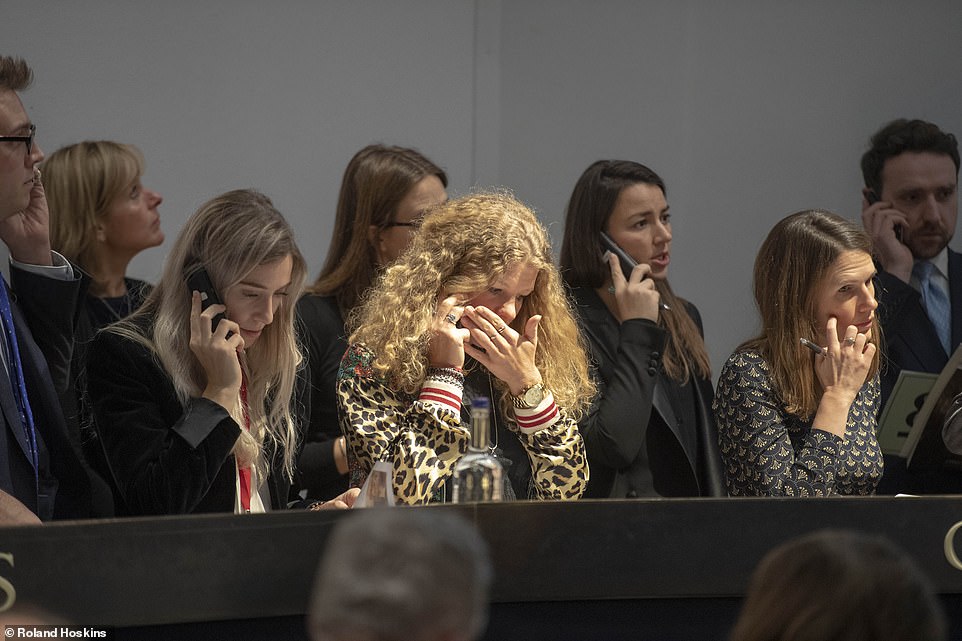 Guests inside the bidding room were frantically trying to get the best price for different lots, as the total amount raised at the auction soared past £1million with more than half the lots remaining 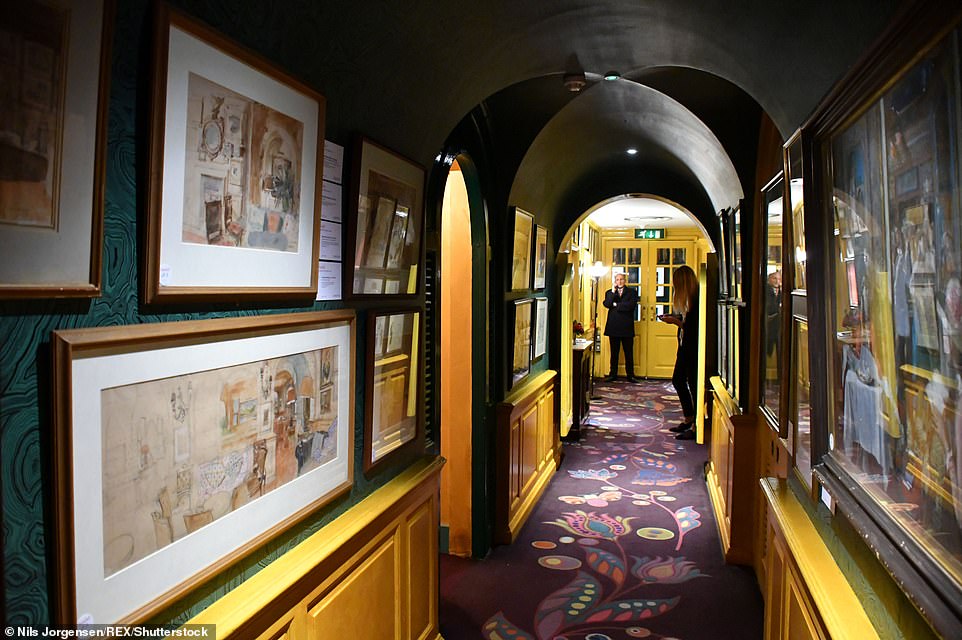 The main corridor at Annabel’s, pictured during a pre-sale exhibition photoshoot last week 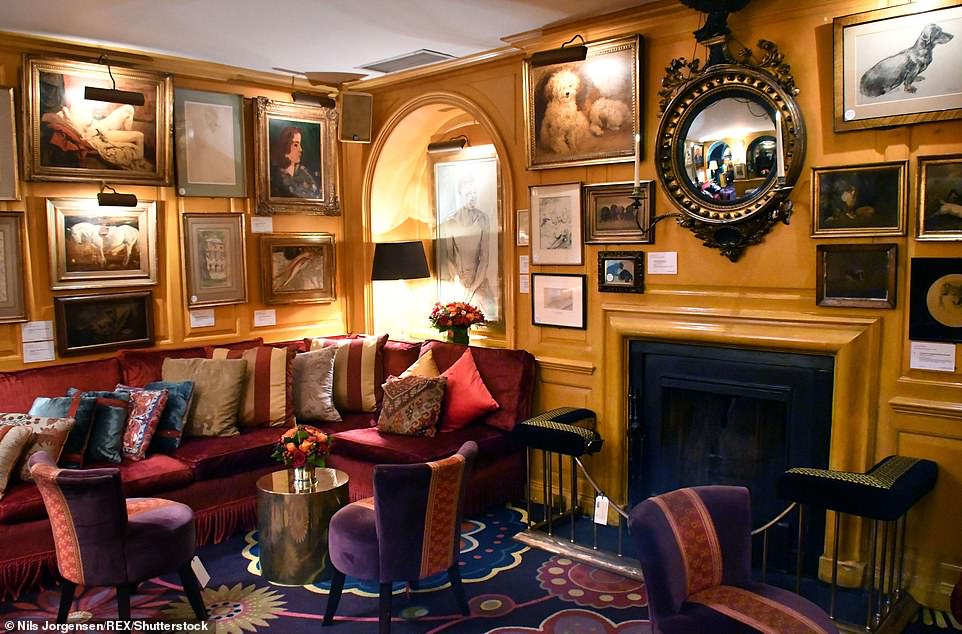 The contents of Annabel’s of Mayfair, at its former location, are on sale after it closed down 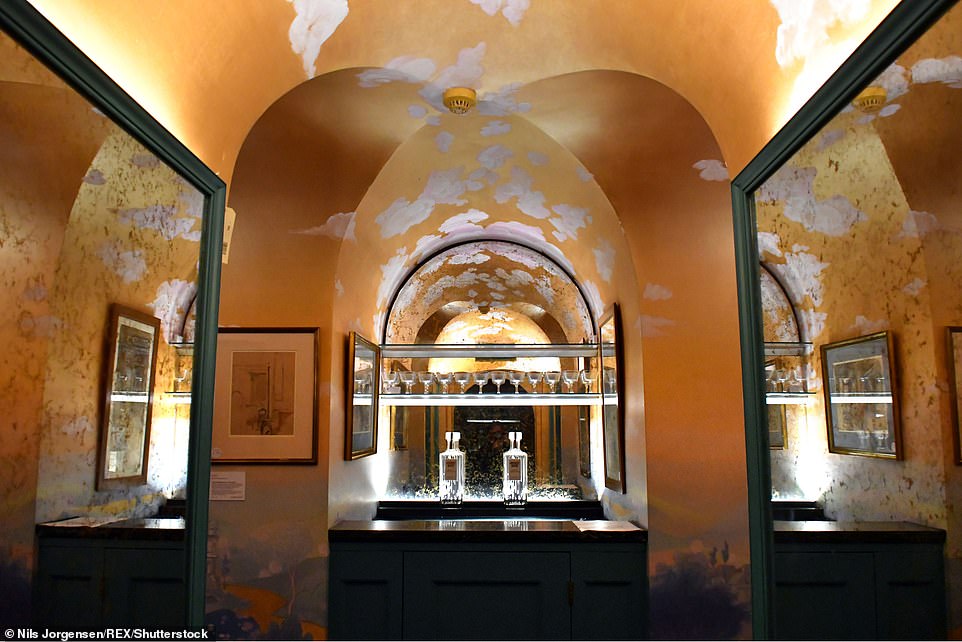 The auction includes more than 250 pieces – and comes after the club moved to a new address two doors down earlier this year.

The previous venue had been kept by Mr Caring to host private parties, but he later decided to sell up – and he will collect the proceeds from all but two lots.

The venue, where members pay an annual subscription of up to £2,750, is one of the world’s most exclusive clubs and previously stood at 44 Berkeley Square.

But it moved two doors down into a Grade I-listed Georgian house earlier this year, with pink onyx oyster shell-shaped sinks and gold swan taps in the powder room. 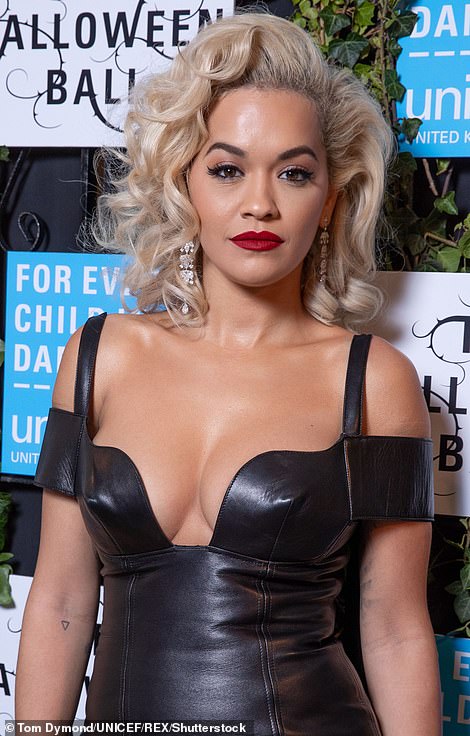 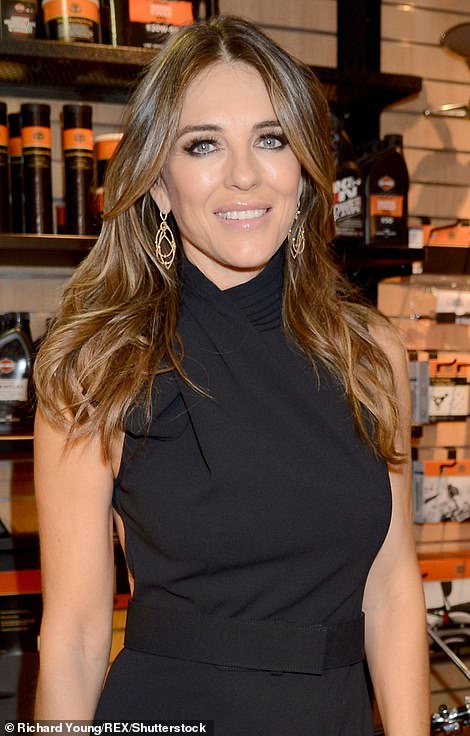 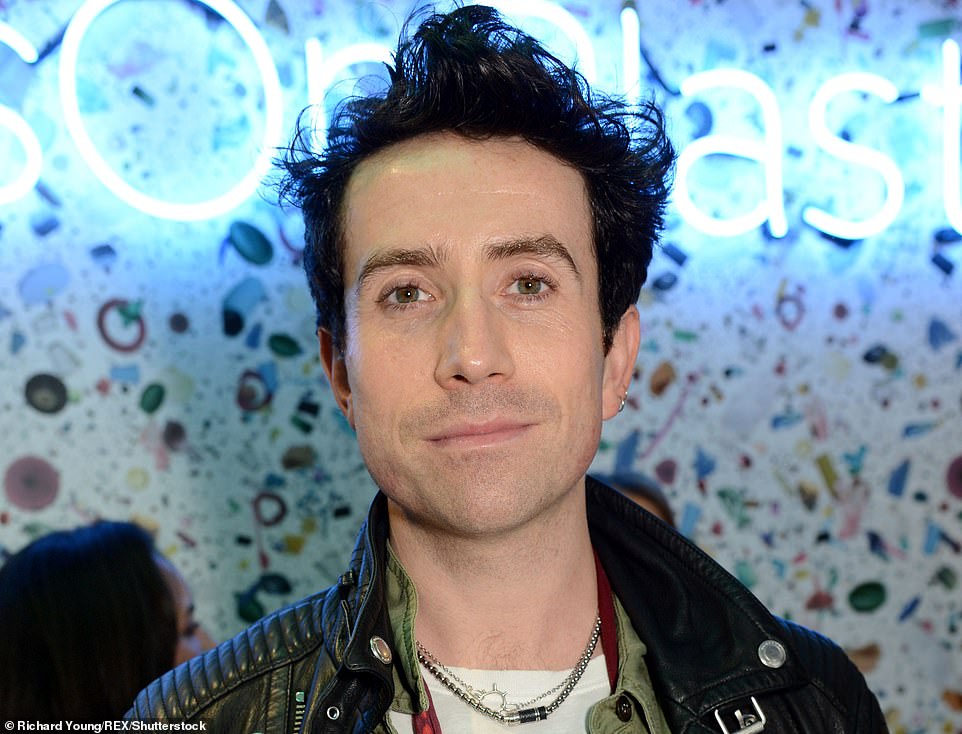 The club was founded in 1963 by Mark Birley and Annabel Goldsmith, who invited 500 friends to become founders. Those alive now still pay a fixed fee of £5.25 a year.

The club has since hosted the Queen, who was said to have asked for a gin martini with no lemon, and Frank Sinatra, who tipped the cloakroom attendant £100.

John Wayne also visited, and was said to have slurred to a surprise man alongside him at the urinals: ‘You can tell your buddies you hung out with John Wayne’.

Even more famously, Princess Diana and the Duchess of York turned up in 1986 disguised as policewomen after failing to gatecrash Prince Andrew’s stag do.

Other celebrities known to have visited the club include Lady Gaga, Tina Turner, Bryan Ferry – while the Beatles were famous turned away for flouting the dress code. 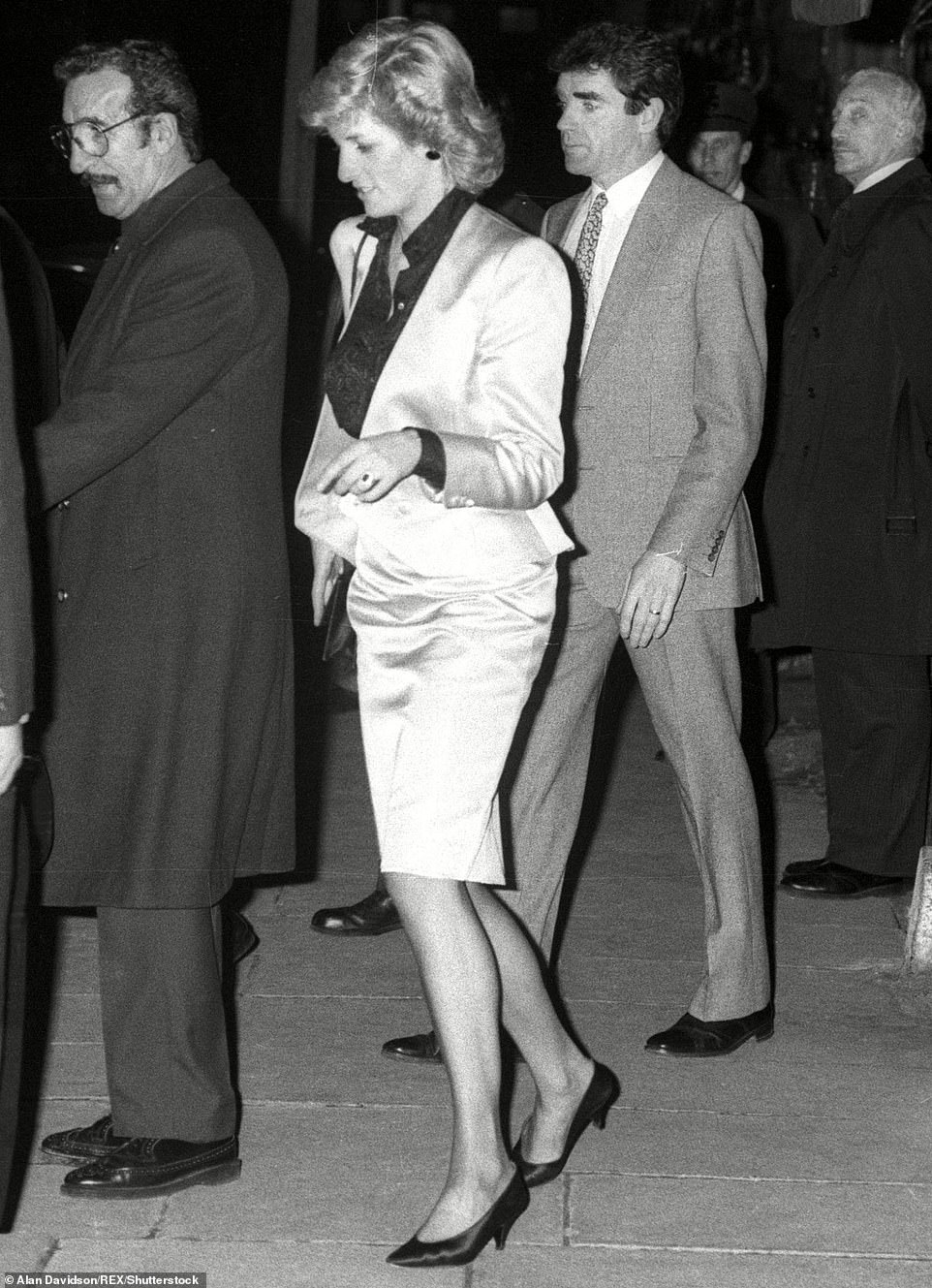 The club once hosted Princess Diana in 1987. She also went in 1986 with the Duchess of York 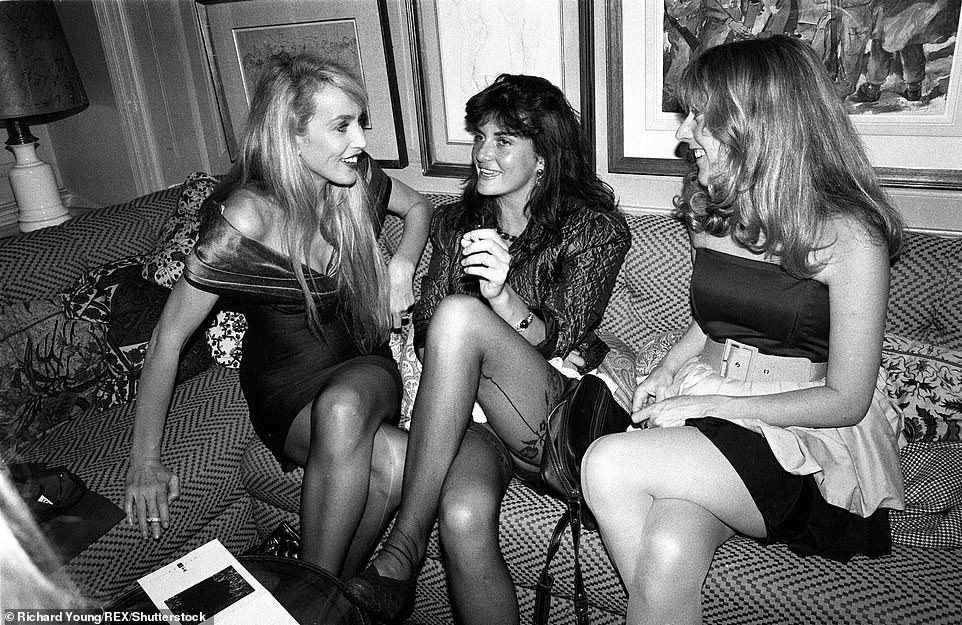 Model Jerry Hall (left) was a previous visitor the club, and she is pictured there in 1987 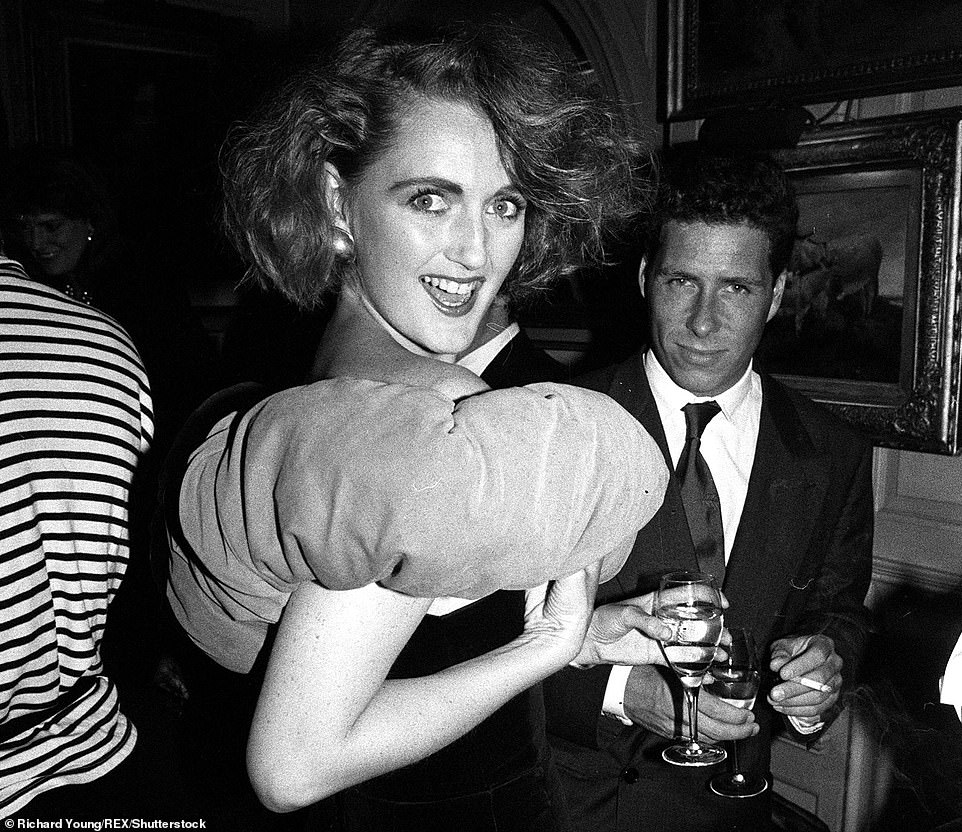 It girl Francesca von Habsburg, with ex-Christie’s chairman David Linley at the club in 1987

‘Everyone has a story, these walls have seen so many things, and a lot of people have specific memories. Be it the sofa where they got engaged, or something else.’

He said more than 2,000 people had viewed the lots at 44 Berkeley Square in a week, adding: ‘I feel like I’ve lived in a nightclub for a week. Everything is for sale.’

Meanwhile Mr Caring said: ‘As the greatest and most iconic nightclub in the world, I’m honoured to have had the opportunity to carry on its legacy.’