Rita Ora touches down in Miami

She performed her smash hit For You at the BRIT Awards in London on Wednesday.

But Rita Ora didn’t stick around too long in the English capital as she quickly jetted off to Miami, Florida on Thursday… mere hours after duet partner Liam Payne hit the tarmac in the same city.

Despite sharing her BRIT hangover woes on Instagram, the 27-year-old songstress appeared fresh faced as she touched down, rocking an eclectic black shirt with artistic embellishments over a slouchy nautical stripped jumper.

Rita didn’t seem to mind the colour clash as she made her way through the terminal, slipping her lithe pins into a pair of simple black skinny jeans.

The Hot Right Now hit-maker kept it comfortable for her trip in black biker boots while she trundled her eye-catching yellow tartan tote and blue suitcase.

Carrying her phone around her neck, Rita’s stunning complexion was heightened by a touch of nude pink lip and a hint of mascara.

Rita’s blonde tresses were left to naturally fall over her shoulders as part of her casual ensemble. 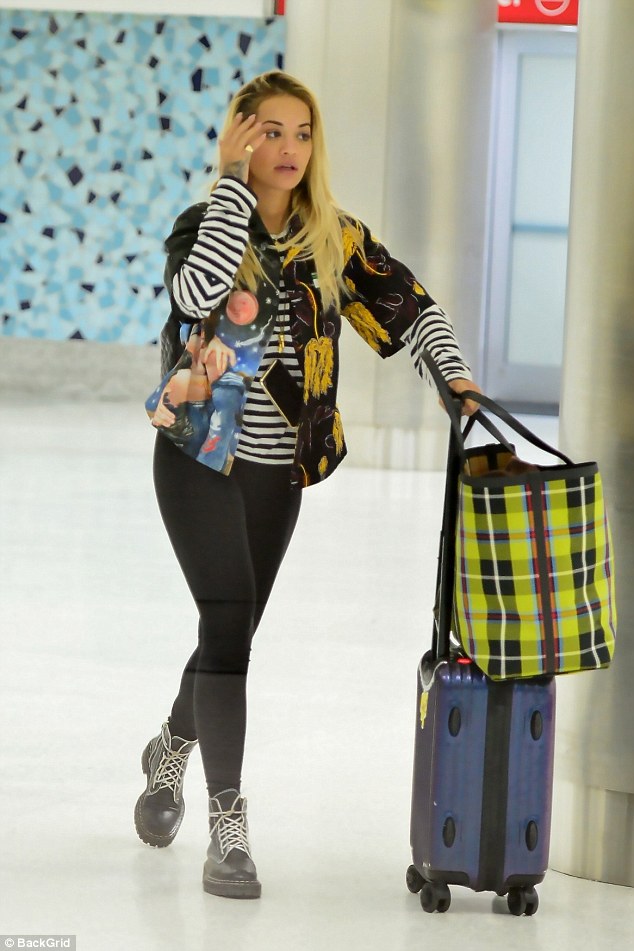 Edgy look: The 27 year-old songstress appeared fresh faced as she touched down, rocking an eclectic black shirt with artistic embellishments over a slouchy nautical stripped jumper

While looking ready and raring to go at the airport, Rita shared a smiling pic on her Instagram with the star still suffering from her BRITs hangover.

The blonde beauty, who also donned a black hat for her travels,  captioned the amusing post: ‘Also your on your way home still Hungover from the Brits and your sis don’t wana [sic] get out the picture incase someone steals the pizza. I can’t.’

Her outing comes as former One Direction bandmate Liam Payne also touched down in the Sunshine State having spent a night away from girlfriend Cheryl following their loved up PDA display on the BRIT red carpet. 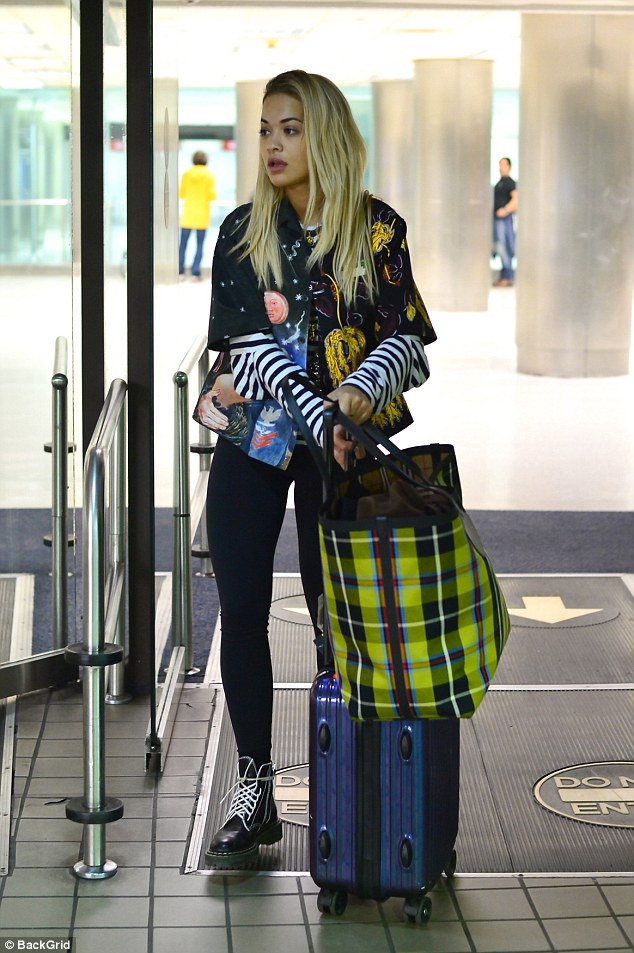 Hot right now: Rita didn’t seem to mind the colour clash as she made her way through the terminal, slipping her lithe pins into a pair of simple black skinny jeans

Liam – who shares 11-month-old son Bear with the former Girls Aloud singer – let his fans know that he had flown Stateside to shoot a new music video by posting a clip of himself riding in a taxi on his Instagram story.

He enthused: ‘Just landed here in Miami, and we have Michael Jackson on the radio which is always nice.

‘It’s sunny outside and I’ve got a cardigan on, which all makes perfect sense. Music video time.’

The timing of his trip will no doubt spur rumours that his relationship with Cheryl is in crisis, with sources telling The Sun that the pair could split in ‘a matter of weeks’.

The couple attempted to downplay the allegations when they put on an overzealous display at the BRIT Awards on Wednesday, though insiders have branded the whole thing a ‘stunt’.

A source told the publication: ‘Cheryl and Liam’s friends say things aren’t good between them and have made it clear their relationship will soon end. 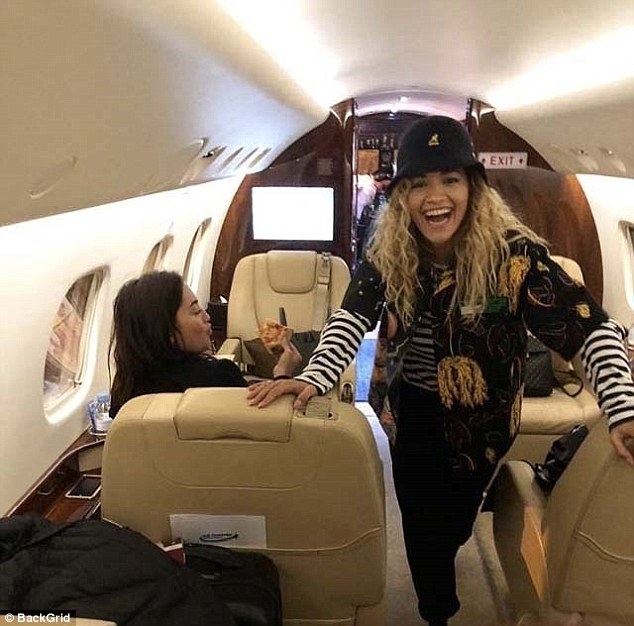 Feeling it: Rita took to Instagram before touching down, saying ‘Also your on your way home still Hungover from the Brits and your sis don’t wana [sic] get out the picture incase someone steals the pizza. I can’t’

‘But with a single to promote, Liam was not going to miss the opportunity, and having Cheryl with him gives him even more limelight.

‘They are trying to work things out and want to be together for their son Bear’s first birthday next month. But things are very strained.’

Hot off the heels of their BRIT performance of their chart-topping duet, viewers noted that Rita kept her distance from Liam on stage out of respect for his girlfriend Cheryl who was watching from the audience, after they had battled split rumours. 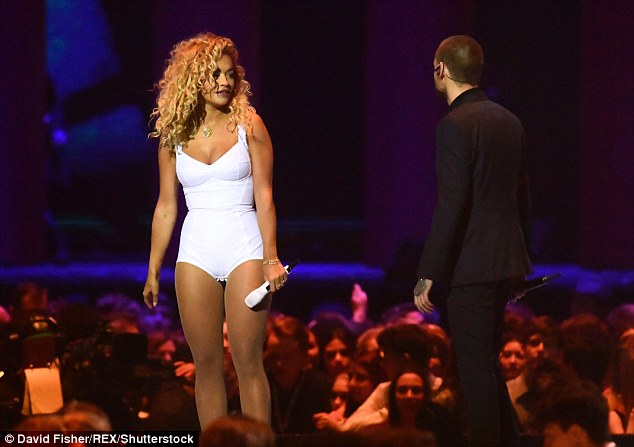 Out of respect? While their previous performance saw them locking lips and holding onto one another, this time, they barely got close

Twitter went wild over the reserved performance and couldn’t help but speculate that it was because of Cheryl’s presence a few feet in front of them.

They wrote: ‘Did that performance between Rita Ora and Liam Payne look mega awkward? it’s as if Cheryl told him not to go near her #BRITs2018 #BRITS.’

‘Liam and Rita looked a bit awkward on stage, probs because Cheryl was there nonetheless she looked fit #brits,’ another penned.

‘Rita and Liam had zero connection on stage between each other. Also that hug was ridiculously awkward lol. #BRITs,’ noted another. 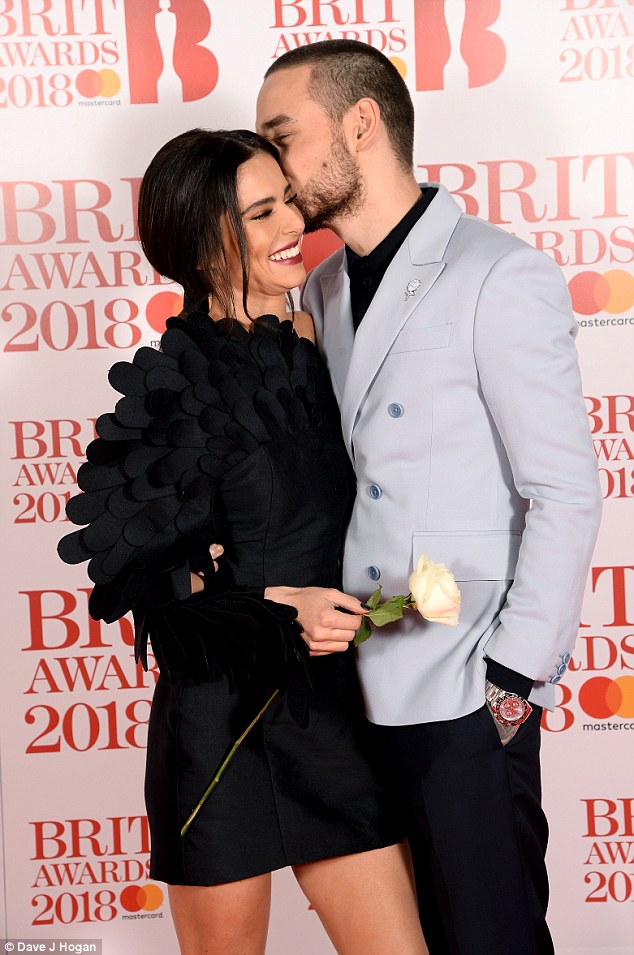 They’re back! Cheryl and Liam put on a show of unity at Wednesday night’s BRIT Awards