A Scottish football club is being mercilessly trolled after a rival fan posted an hilarious video of what he claimed was their ‘hospitality suite’.

The clip shows a long walk up broken and rubbish-strewn concrete steps to a small, shed-like structure containing four chairs.

The footage was filmed at Dundee FC’s ground and uploaded by Jim Mccorkindale, a supporter of bitter rivals Dundee United.

Footage uploaded by Jim Mccorkindale shows a long walk up broken and rubbish-strewn concrete steps to a small, shed-like structure 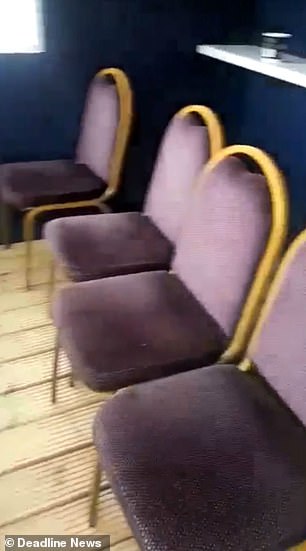 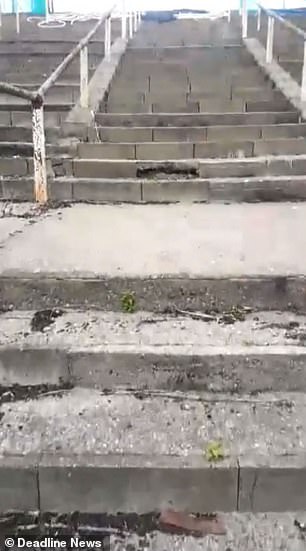 The ‘pod’ contains four chairs (left) and according to the club offers fans little extra comfort, shelter and free food and drink at half time. But is accessible from an untidy concrete staircase (right)

The video has prompted hilarity among Scottish football fans, one of whom quipped that conditions were better in a ‘North Korean prison’.

However, Dens Park insiders say the area is not their official hospitality but a free, fans’ ‘pod’, where supporters can enjoy a little extra comfort, shelter and free food and drink at half time.

The clip was posted on Christmas Eve with no caption except laughing emojis.

The video shows the man walking up a flight of steps towards the football pitch at Dens Park as the man says: ‘Hi mate, I’m just here for the hospitality, wait til’ you see this one guys.’

As the United fan walks up the steps he says ‘nae wheelchair access though, but watch this, it’s a f****** belter, their new hospitality suite.’

Another man can be heard saying to the fan ‘just up here sir’ as the United fan replies ‘thank you, oh, better watch out for all that’ as the fan encounters hose pipes and a black tarpaulin lying in the middle of the steps. The other says ‘just mind yer feet’. 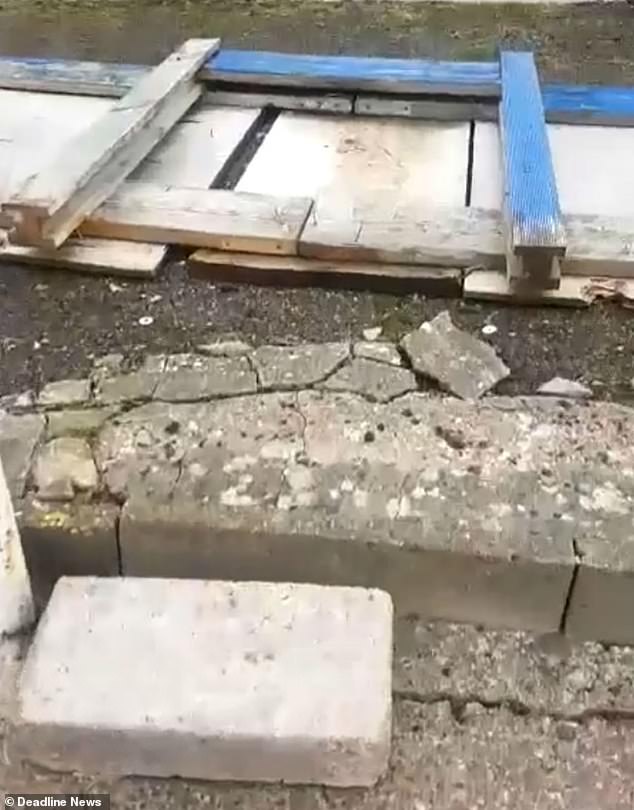 As the fan gets to the top of the steps we see a loose brick and broken wooden pallets with nails sticking out. The fan says ‘oh watch the nails, but there’s the new hospitality suite for the guys there look. In the Dens Park choir, oh you f*****.’

The pitch looks in pristine Premier League condition however as the fan gets into the ‘hospitality’ suite he reveals only four chairs in a small outdoor shelter.

The fan can be heard giggling as the camera pans around the area to show empty cups scattered on a shelf. 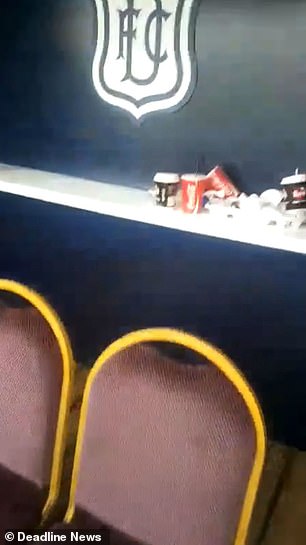 Rubbish appears to have been left at the back of the ‘pod’, including fizzy drink cartons and coffee cups. Some of those who viewed the footage found the unit not quite up to scratch

The United fan continues to giggle and says ‘right next to the jungle’ as he appears to reference the Dens Park away end.

The video has got many rival fans taking advantage of the opportunity to rip into Dundee.

Frankie Curran wrote: ‘Is it champagne reception on arrival or just your standard hospo?’

Paul Cooney added: ‘A couple of pallets for the flooring, no expense spared, it’s got to be up there with some of the best hospitality packages in European football.’

But other fans spotted it was not the club’s official hospitality.

Lee Fairfield said: ‘The hospitality is in the main stand – f*** knows what that is.’

Andy Keith added: ‘Haha nah that is a state, but it’s free like. Four people get picked from some draw every week. Sure they get all the food and drinks free and that too.’ 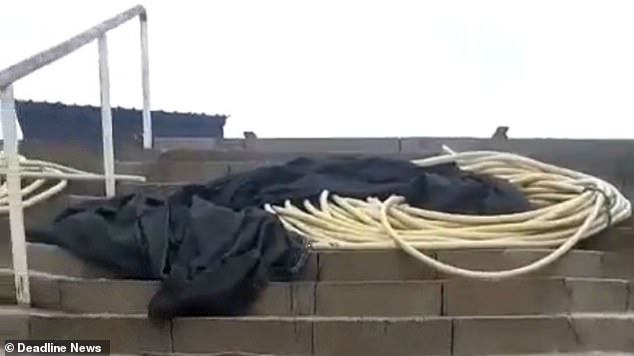 The video showed rubbish left on the steps, as Mccorkindale made his way to the wooden structure. He said today that the video was all just a bit of banter

Dozens commented on Mr Mccorkindale’s video, with many taking the opportunity to troll the rival club (above and below)

Mr Mccorkindale, 40, today said it’s all a bit of banter.

An insider said: ‘The fan pods are for supporters to provide with an alternative view of the game.

‘The Dundee Suppoters Association and junior supporters give fans the opportunity of an alternative match day experience for free.

‘I believe this video was filmed in the Summer as the new sponsorship advertisment boards are not up yet.’