Veteran fund manager Hugh Sergeant has rarely been more positive about the UK equity market in a City career spanning more than a quarter of a century than he is now.

Sergeant, head of value and recovery at asset manager River and Mercantile, believes the UK stock market could deliver returns of up to 30 per cent this year.

His view is that corporate profitability will bounce back sharply as the economy reopens and goes into strong recovery mode.

Bounce: Over the last year, in the aftermath of a strong market correction in February and March 2020, the fund has recorded a total return of 61%

Although he doesn’t dismiss the possibility of a third wave of coronavirus, he argues that its economic impact – if it happens – would be less destructive because of the Government’s successful vaccination programme.

‘The animal spirits are fairly good,’ he says, using a phrase coined by economist John Maynard Keynes 85 years ago to describe consumer confidence in the economy and stock market. ‘There’s a lot of cash out there waiting to be spent by consumers – and it will be. That will be good for UK plc.’

He adds: ‘The UK stock market is in a sweet spot. Share valuations are still low relative to other equity markets because of the lingering hangover from the Brexit referendum. So they have greater potential to rise.

‘Corporate profits are set to recover strongly as the economy reopens, while the market is underpinned by certainties it hasn’t had for a while – greater political certainty and more confidence that we can break the grip of coronavirus through the vaccination programme.’

Sergeant’s River and Mercantile UK Recovery Fund is set up to maximise returns from this market bounce. 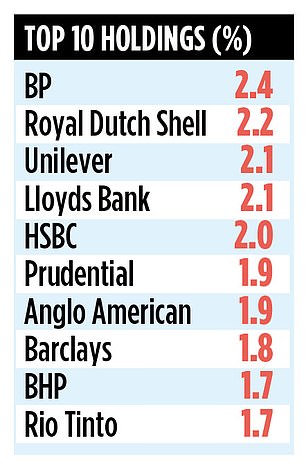 More than 80 per cent of the fund’s assets are invested in the UK, with holdings ranging in size from FTSE 100 giants BP, Shell and Unilever – through to minnows such as AIM-listed Somero Enterprises, a company that manufactures equipment used in the laying of concrete.

Judging by the fund’s performance, the ‘bounce’ is already in full swing. Over the last year, in the aftermath of a strong market correction in February and March 2020, the fund has recorded a total return of 61 per cent.

But Sergeant is optimistic there is more to come. He believes there are pockets of excellent value in sectors such as energy and banking which should benefit from an economy in growth mode. BP, Shell and banks Lloyds, HSBC and Barclays are all top 10 holdings.

‘Energy companies will do well on the back of economic recovery,’ says Sergeant. ‘As for the banks, the economic environment is the most favourable it has been for ten years and their shares remain attractively valued.’

Unlike most other fund managers, Sergeant does not run a concentrated portfolio. Far from it. The UK Recovery fund is invested in more than 300 companies.

He describes this as a ‘Hugh Sergeant idiosyncrasy’ and says it has stood the fund’s investors in good stead over the years. ‘I am constantly looking at new ideas for the fund,’ he says.

‘It often means I adopt a gradualist approach where I invest a small amount into a share to begin with and build the position as positive news comes out about the company.’

He admits some companies ‘blow up’ – are stock market flops – although he says his success rate is greater than 90 per cent.

Key overseas holdings include German car-maker Volkswagen – Sergeant believes its investment in electric cars is unrecognised by the rest of the market – and Chinese internet search engine Baidu. The fund’s stock market identification code is B614105 and annual charges total 1.14 per cent.

With an income of less than one per cent a year, it is not suitable for income investors.