EXCLUSIVE: Riverdale’s Cole Sprouse holds back his friend from a late-night brawl outside a restaurant in LA… after they accuse someone of allegedly making a racist remark

Riverdale star Cole Sprouse was pictured in the early hours of Thursday morning involved in a late-night brawl on a street in Silver Lake, Los Angeles, where he was seen holding back a male friend from a fight.

In video footage obtained by DailyMail.com, Sprouse, 27, is seen trying to calm his friend down who is overheard accusing a man of making a racist remark outside a restaurant.

The incident took place around midnight, and Sprouse’s male friend is at one point heard telling another man on the street ‘You’re a racist!’ as tensions between two separate groups start to escalate.

Street fight: Riverdale’s Cole Sprouse holds his friend back from a late-night brawl outside a restaurant in LA on Thursday… after they accuse someone of allegedly making a racist remark

DailyMail.com has reached out to the actor’s reps for comment.

Sprouse is seen trying to dissipate the row between the two men, who are both wearing white shirts and khaki trousers.

The actor’s friend who has a his long hair in a ponytail is overheard alleging that another man made a racist remark, who then pushes back on the man appearing to deny the accusation.

On-lookers dining outside of the restaurant looked on at the brawl, and as it went on, more passers-by got involved. 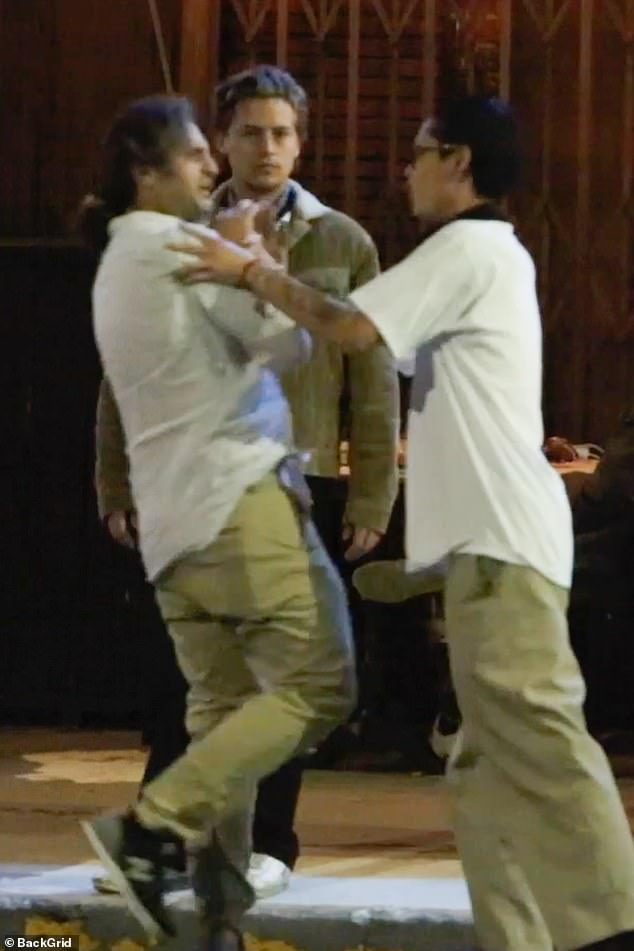 Physical: Sprouse’s friend (left) is seen fighting with a man (right) after an altercation between the two men broke out in the early hours of Thursday morning 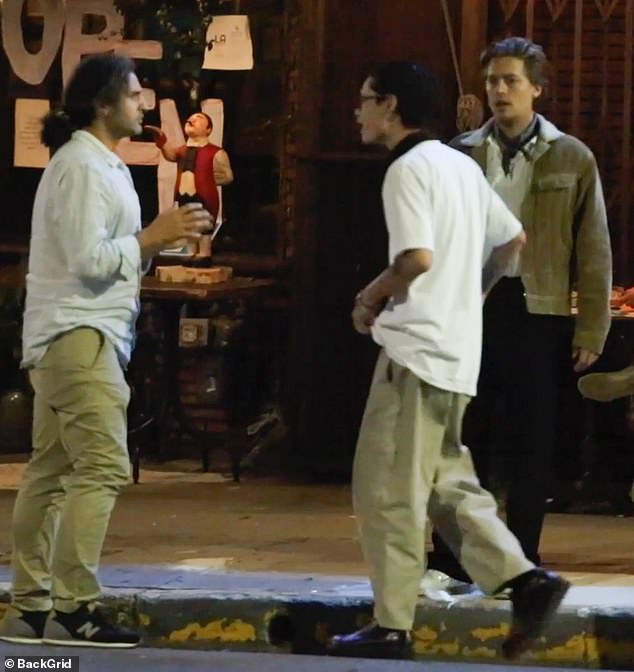 Bust-up: Two men were seen arguing outside the restaurant in Silver Lake, LA, and it quickly turned physical with two groups of friends defending each other 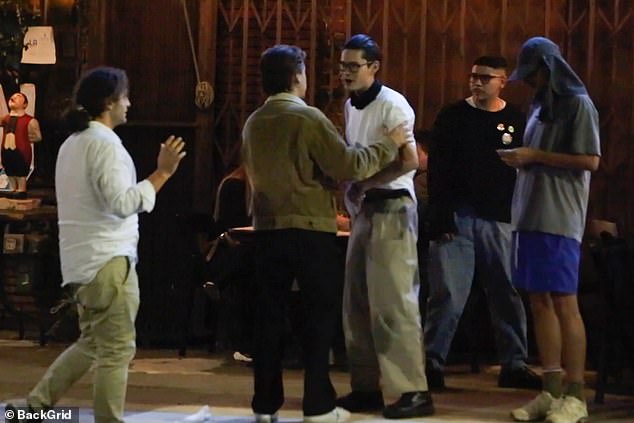 Peace maker: Actor Cole is seen trying to calm the situation after his friend made some accusatory remarks

Later in the video, a blonde woman starts telling Cole and his friends to leave the situation saying: ‘You guys need to go!’ as she appeared to be trying to move everyone on from the restaurant.

Earlier this week, California governor Gavin Newsom ordered restaurants to close back up after spikes of cases of coronavirus have risen dramatically, however, this only applies to indoor dining.

Last month, Sprouse revealed that he was arrested during a Black Lives Matter protest, despite the event being peaceful. 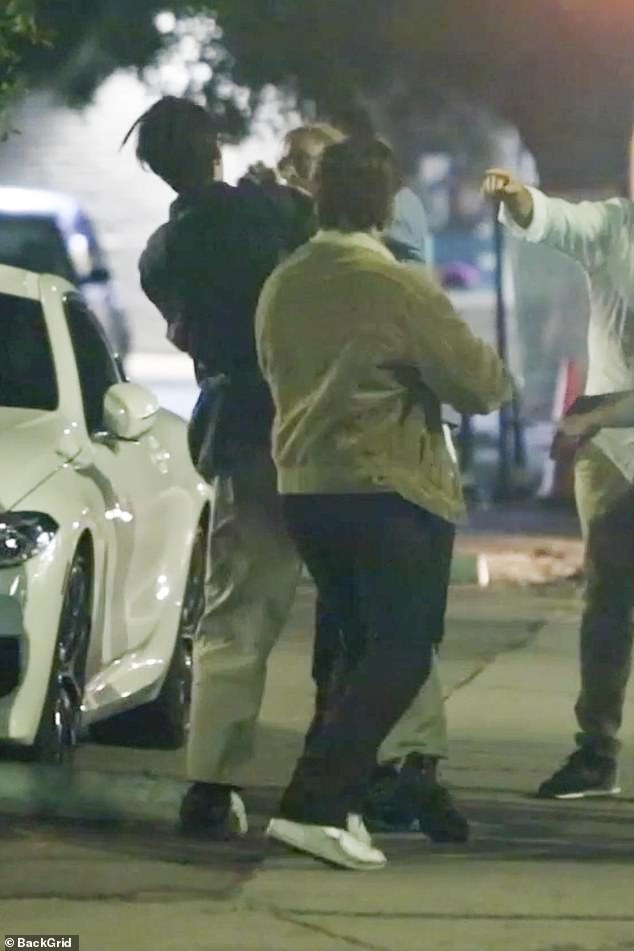 Busted: As the altercation appeared to get out of control two other men swung for each other as separate groups got involved 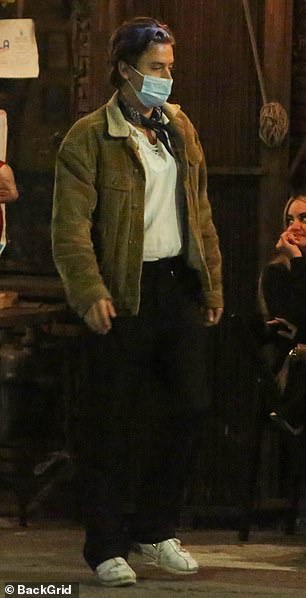 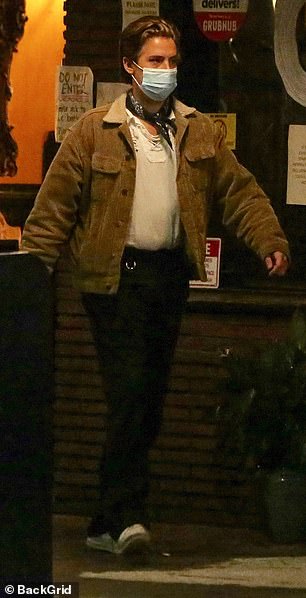 Masked up: Cole Sprouse was seen with a facial covering as he was pictured outside the restaurant where the fight broke out 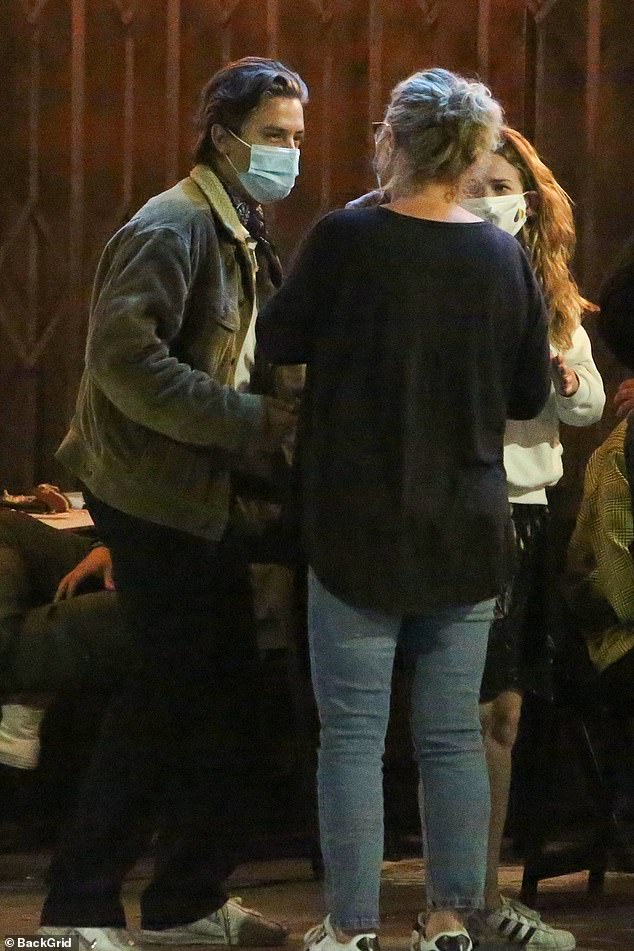 Trying to calm the situation down: Sprouse is seen talking to a blonde woman who later tells the group to go home in a bid to break up the fight

‘A group of peaceful protesters, myself included, were arrested yesterday in Santa Monica,’ he wrote on Instagram, June 1.

‘So before the voracious horde of media sensationalism decides to somehow turn it about me, there’s a clear need to speak about the circumstances: Black Lives Matter.’

The actor added: ‘I was detained when standing in solidarity, as were many of the final vanguard within Santa Monica. We were given the option to leave, and were informed that if we did not retreat, we would be arrested.’

‘When many did turn to leave, we found another line of police officers blocking our route, at which point, they started zip tying us.’

He concluded the post: ‘It needs to be stated that as a straight white man, and a public figure, the institutional consequences of my detainment are nothing in comparison to others within the movement.’ 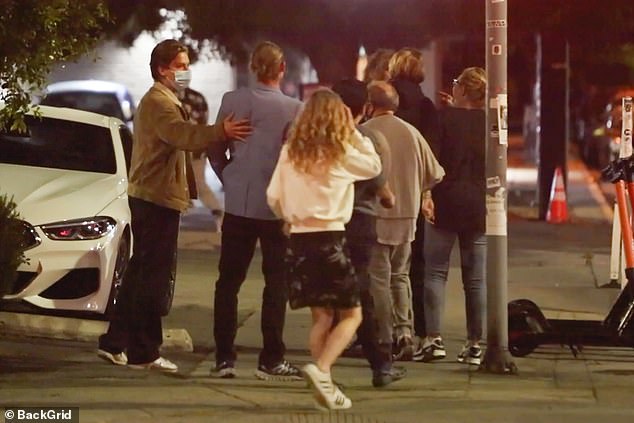 Escalating: Others crowded around as the fight appeared to get heated 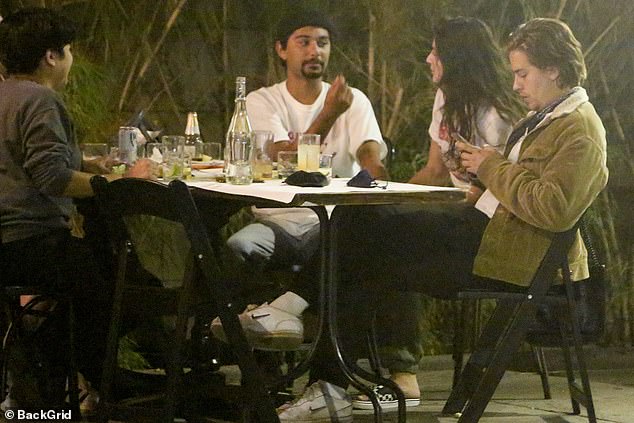 Before the drama: Cole was seen enjoying a dinner outside with friends