A skull uncovered near the busy Lakeside shopping centre belongs to a dementia sufferer whose disappearance eight years ago sparked a nationwide television appeal.

A missing persons enquiry launched in December 2010 – involving 100 people, 200 door-to-door searches, and 250 hours of CCTV footage – failed to find Michael Forrest, 63 after he went missing and was seen on CCTV at the Thurrock shopping centre.

But two weeks ago road workers digging up land near the A13 just a few hundred metres from Lakeside found a human skull which has since been matched to Mr Forrest. Yesterday the rest of his remains were uncovered in nearby woodland.

Dementia sufferer Michael Forrest, 63, went missing in December 2010 and his remains have just been found

Police are now treating his death as unexplained but say there is no reason to believe anyone else was involved.

A national TV appeal on This Morning was presented by Gloria Hunniford after his disappearance, in a bid to help find the vulnerable missing person after he was spotted on Lakeside CCTV.

Michael Forrest was last seen near his home in Ockleford Avenue, Chelmsford at around 8am on Tuesday, December 7 2010.

It is believed he had left his home and had been travelling by bus to the Lakeside shopping centre.

He was reported missing after he failed to return home and subsequently missed two hospital appointments.

A missing person investigation was carried out involving more than 100 officers and members of staff.

After the alarm was raised in December 2010 police could not find him despite printing thousands of posters, visiting hundreds of houses and trawling CCTV.

A spokesman for Essex Police said: ‘A missing person investigation was carried out involving more than 100 officers and members of staff.

‘More than 8,000 letters and missing posters were delivered to local residents and businesses, more than 700 letters and posters sent to drivers of vehicles known to been in the area at the time Mr Forrest was last sighted, and more than 200 house-to-house enquiries were carried out. 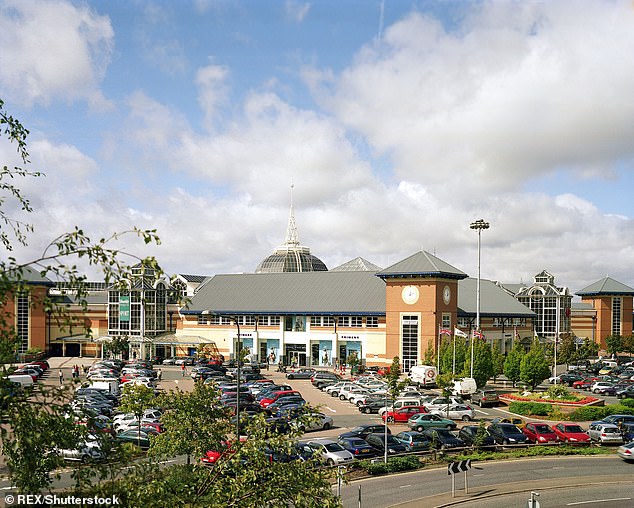 The remains were found just a few hundred yards away from Lakeside Shopping Centre in Thurrock, Essex

‘Officers obtained more than 50 witness statements, watched more than 250 hours of CCTV footage, and searched 26 separate areas, including the lake near to Lakeside.

‘However, no trace of Mr Forrest could be found.’

After the skull was discovered on January 3 police searched a wood between the A126/A13 junction and the Lakeside Sports Ground where the rest of Mr Forrest’s skeleton was found yesterday.

Detective Superintendent Stephen Jennings, who led the investigation following the discovery, said: ‘Mr Forrest’s death is being treated as unexplained but there is no evidence anyone else was involved

‘This is a tragic discovery and my heart goes out to his family.

‘I hope it will bring them some closure though and give them some answers about what happened to their loved one.’