Roads should be narrowed to force motorists to walk more

Councils should narrow or even close roads and impose toll charges to force motorists to walk, says the health watchdog.

They should also fix hazards such as potholes and widen footpaths to ‘hand back’ roads to cyclists and pedestrians.

New guidance from Nice urges local authorities to take a series of measures that will encourage Britons to leave their cars at home and be more active.

They have been advised to ‘restrict motor vehicle access’ on some roads and also ensure paths are less hazardous to ensure walking is an ‘attractive option’.

New guidance from Nice urges local authorities to take a series of measures that will encourage Britons to leave their cars at home and be more active. (File picture)

The advice is part of guidance issued by Nice to help local authorities improve the health of their residents. But critics said the quango should be made to focus on issues of frontline healthcare rather than issue ‘nanny state’ orders.

Professor Mark Baker, director of the centre for guidelines at Nice, said: ‘Handing back some of the roads to pedestrians and cyclists will help people to become more active.

‘Simple things such as ensuring street lights along footpaths are working and hedges are kept trimmed makes walking a more attractive option which will lead to people living healthier lives.

‘People with limited mobility need extra help from their surroundings such as adapted crossings and public transport that can be used with a wheelchair. With a little thought these measures can be designed into our public spaces to help everyone be more active.’

Other suggestions include installing benches at ‘regular intervals’ along footpaths should pedestrians need a rest.

Councils should also consider rolling out 20mph speed limits in built-up areas to ensure that they are more pleasant for pedestrians or cyclists.

Almost two-thirds of adults in the UK are either overweight or obese – rates that are the worst in Western Europe. Another one in four of the population are classed as inactive, meaning they do less than 30 minutes of exercise each week. 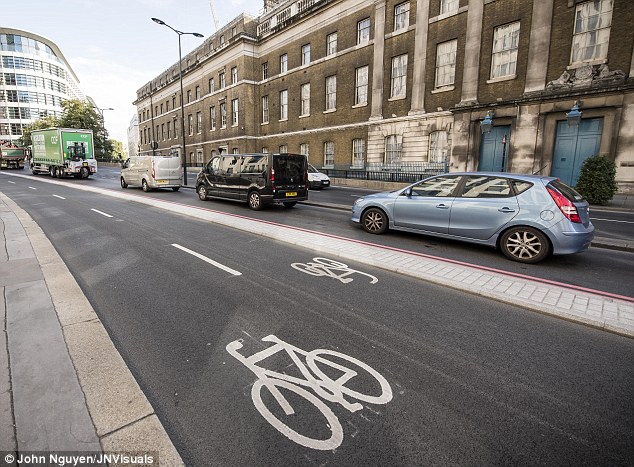 Guidelines from National Institute for Health and Care Excellence state that footpaths and cycle routes must be convenient, safe and attractive to use, and maintained to a high standard including the removal of any hazards, such as tree roots. (File image)

‘Councils have made some progress in tackling the backlog of road repairs, despite increasing traffic levels,’ he added.

Nice was set up in 2000 to decide which drugs should be available on the NHS as well as issuing guidance for healthcare staff. But its remit has massively expanded and it now publishes frequent advice on wider health issues.

Alex Wild of the TaxPayers’ Alliance said: ‘At best these suggestions are statements of the obvious, at worst examples of a bloated quango going far beyond its original remit.

‘Bureaucrats shouldn’t be advising town halls as to how they can make life more inconvenient for motorists – councils are usually perfectly capable of doing this themselves. It’s time the Government cut these organisations down to size and put the savings into front line healthcare.’

Chris Snowdon, head of lifestyle economics at the Institute of Economic Affairs think-tank, said: ‘No one can argue against fixing potholes and trimming hedges but as anti-obesity policies they are frivolous in the extreme.

‘It is important for people to be physically active, but the results of this brainstorming session reveal how little control the Government has over personal choices.’

Shortcuts that lead to a longer life

Short bursts of activity such as walking to the shops or climbing a flight of stairs are as good as a prolonged bout of exercise, researchers have found.

As long as exercise adds up to an hour a day – no matter in how many sessions – it cuts the risk of an early death by 57 per cent.

NHS advice currently recommends all adults get at least 150 minutes of moderate activity a week in bouts of at least ten minutes at a time to allow the heart rate to build up.

But experts fear many people find the target too daunting and simply admit defeat and return to the sofa. The new study suggests the targets are too restrictive and any exercise – even a few seconds – adds to the total.

Scientists at Duke University School of Medicine in North Carolina tracked nearly 5,000 people and found that bursts of activity of less than ten minutes over the day were as good in reducing the risk of death and disease.

Lead researcher Dr William Kraus, whose work is published in the Journal of the American Heart Association, said even trips up and down stairs count towards accumulated exercise minutes and would cut health risks.