Rob Delaney has revealed that his wife gave birth to their ‘magical’ fourth son back in August – seven months after their son Henry, two passed away.

The Catastrophe actor, 41, told The Sunday Times Magazine, that his wife became pregnant again before Henry’s death, and revealed with a warm heart that Henry was the first person they told.

Speaking about the decision to have another baby, Rob explained: ‘We likely would’ve had a fourth anyway. But I mean, there’s mixed feelings.

Magical: On Sunday, Rob Delaney revealed that his wife gave birth to their ‘magical’ fourth son back in August – just seven months after Henry passed away

‘It’s sort of like they touch each other a little bit, but they almost exist in separate lanes. Having another child in no way, shape or form eases the grief of Henry dying.

‘But also having Henry dying doesn’t make our new son any less magical. I want to gobble him up and he deserves our full attention and love, and he grew in the same womb as Henry.’

The actor admitted he is now ‘terrified’ of any sickness in the family, comparing his paranoia to PTSD. 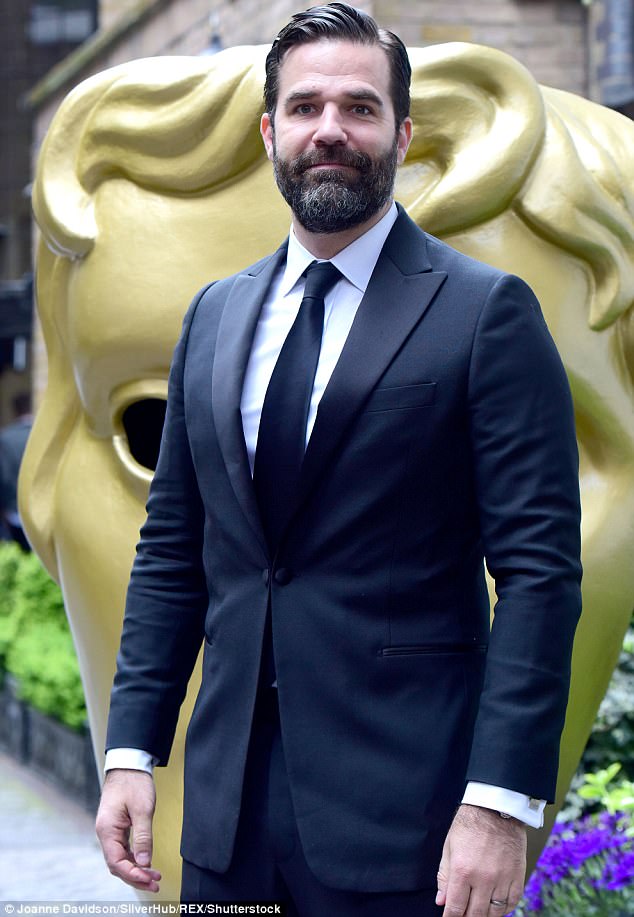 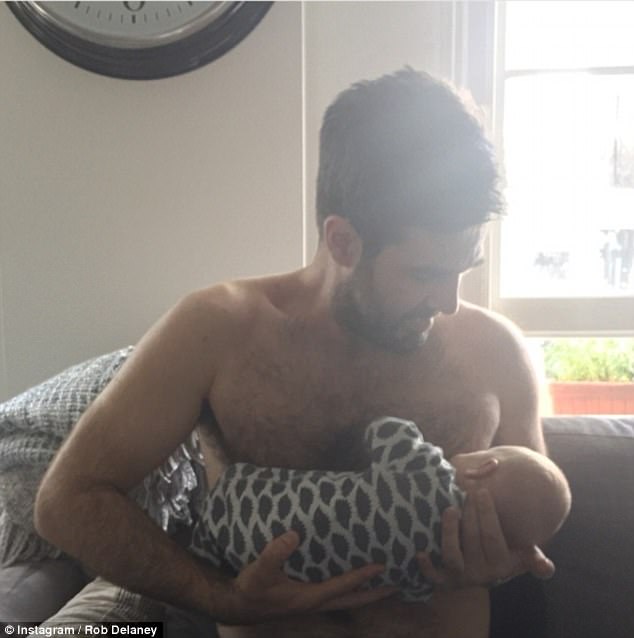 First to know: Rob revealed with a warm heart that Henry was the first person they told (pictured with Henry in May 2015)

He explained that he is ‘terrified of anyone vomiting. It’s like PTSD. If anyone vomits, I think, “Oh, that must be a brain tumour,” and I have to calm down.’

Rob admits he has to consciously work to not let fears about his children’s health infiltrate family life, as it ‘wouldn’t be fair on our kids.’

The television star recently spoke candidly about his heartache after spending his first Christmas without his two-year-old son Henry, who died in January.

The American actor took to Twitter on Wednesday to reveal how he and his family were coping with their grief, admitting he was ‘sad, angry and heartbroken’.

He also shared a picture of his ‘sweet boy’ Henry – who tragically passed away 11 months ago from a brain tumour. 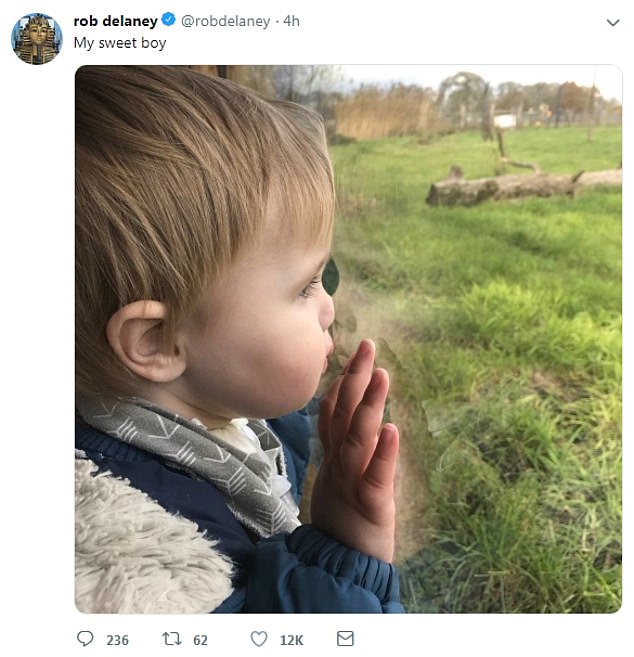 Distressing: Rob took to Twitter on Wednesday to speak about his heartache after spending his first Christmas without his two-year-old son Henry, who died in January

Rob penned: ‘Our first Christmas without Henry came & went. The day itself was okay, maybe because there were so many horrible, painful days leading up to it; we must have hit our quota or something. We talked about him a lot & included his memory throughout the day.

‘I speak publicly about Henry in an effort to destigmatize grief. My family is sad & in pain because our beautiful 2 yr old boy died after a long illness.

‘Tweets like this aren’t therapeutic to me, nor are they “updates”. I just want other bereaved parents & siblings to feel seen/heard/respected/loved. 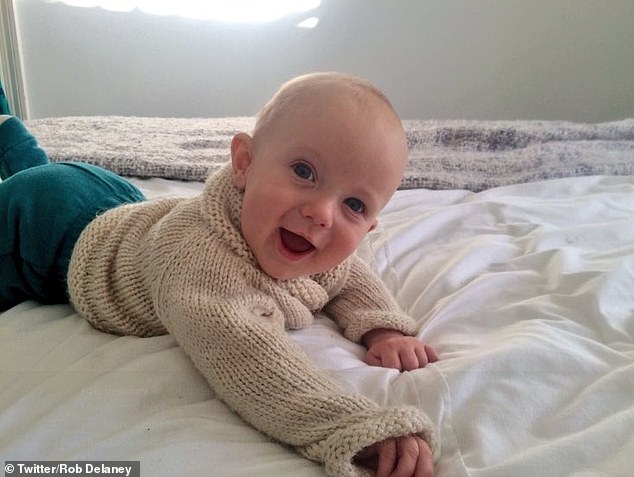 Tragic: Rob’s young son Henry was diagnosed with a brain tumour in 2016 and had surgery to remove it, but the cancer returned in the Autumn of 2017

‘And maybe they might help someone not schooled in grief support a friend better. I don’t know.’

In September, Rob – who announced in June he was expecting another child with his wife – shared a heartbreaking extract of a book he started writing about his son’s brain tumour battle but was unable to finish when Henry died.

Henry’s cancer returned in the autumn of 2017, and his devastated father stopped writing because the family ‘just wanted to be with Henry around the clock and make sure his final months were happy. And they were.’

Revealing why now he decided to share extracts of the book now, Rob explained that he ‘didn’t want to sit on it, in case it could make anyone else feel less insane.’ 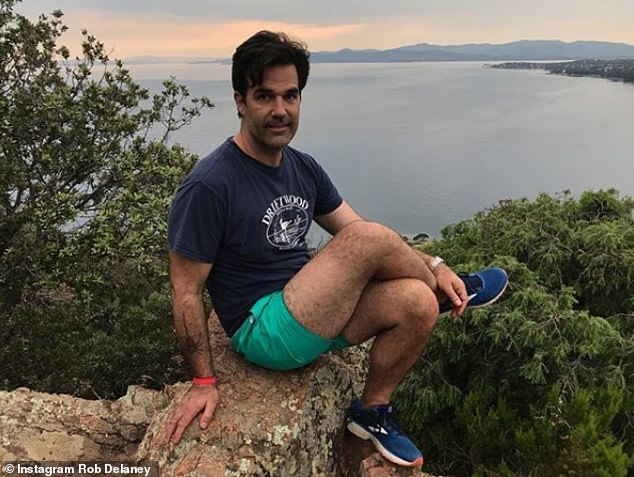 Good news: Rob announced in June that he was expecting another child with his wife

In an essay for Medium the star – who lives in London – explained how his initial aim had been to let other parents of seriously ill children that ‘someone understood and cared’.

‘But I can’t write that book anymore because our family’s story has a different ending than I’d hoped for,’ he explained.

He described crying as he listened to recordings of his son babbling before a tracheotomy rendered him unable to speak for a whole year, and his ‘golden’ smile lighting up his face, which was paralysed on one side.

‘I’m always, always happy to enter the hospital every morning and see him. It’s exciting to walk into his room and see him and see him see me,’ he explained.

An extract from Rob Delaney’s unpublished book about his son

My biggest fear had always been that I wind up somehow being conscious for eternity. Like that I die, wind up in heaven or hell or wherever and I remain ‘me’ and just never shut off and have to endure being conscious and aware and nothing is wonderful enough or horrible enough to engage me for that long, i.e. eternity.

That might be a factor in the heavy drinking I quit fifteen years ago; the idea that I could really effectively hit my own consciousness’ kill switch as needed. Might also be why I’ve always enjoyed naps more than food or money.

That fear went away when my wife and I had kids. Or boys, specifically. My sperm only makes boys for some reason. The fear went away because I realized I could now do eternity and be okay.

I could just call to mind the image of one of my sons, or the smell of their heads, or the feel of one of their little feet in my hand and I’d be happy. Give me a Polaroid of one of them to hold on to and I could do two eternities.

‘The surgery to remove his tumor left him with Bell’s palsy on the left side of his face, so it’s slack and droops. His left eye is turned inward too, due to nerve damage.

‘But the right side of his face is incredibly expressive, and that side brightens right up when I walk into the room. There’s no doubt about what kind of mood he’s in, ever.

‘It’s particularly precious when he’s angry because seeing the contrast between a toddler’s naked rage in one half of his face and an utterly placid chubby chipmunk cheek and wandering eye in the other is shocking in a way that makes me and my wife and whatever combination of nurses and/or doctors are in the room laugh every time.

‘And when he smiles, forget about it. A regular baby’s smile is wonderful enough. When a sick baby with partial facial paralysis smiles, it’s golden. Especially if it’s my baby.’ 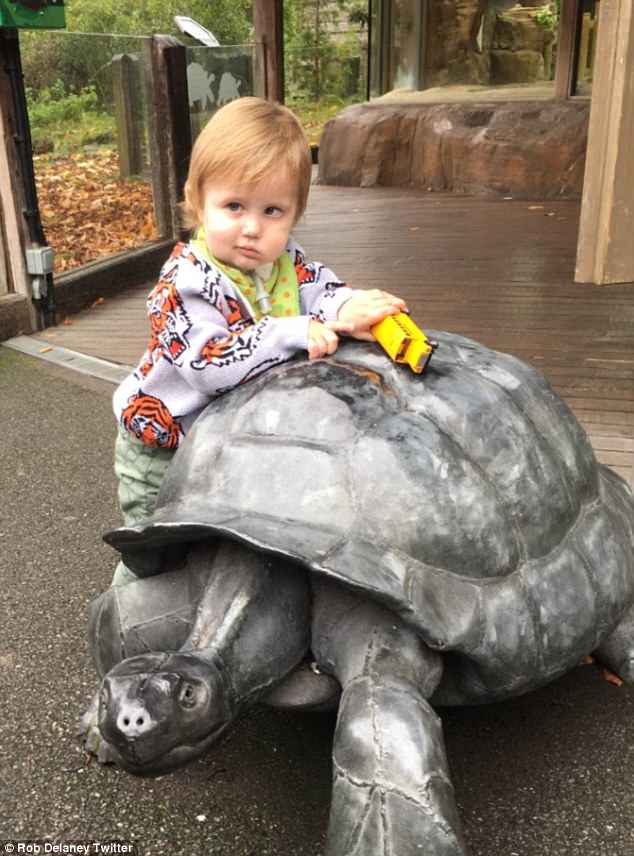 ‘He was smart and mischievous’: Catastrophe’s Rob Delaney revealed his youngest son died aged two from a brain tumor (pictured in April 2016)

The actor tragically lost his two-year-old son to cancer in January this year and confirmed his death in a Facebook post in February, telling fans he would ‘endeavour to not go mad with grief’.

‘Henry was a joy,’ wrote Delaney. ‘He was smart, funny, and mischievous and we had so many wonderful adventures together, particularly after he’d moved home following fifteen months living in hospitals.’

In his message, Rob explained that Henry was diagnosed after suffering persistent vomiting and weight loss, shortly after he turned one.

The toddler underwent surgery to remove a tumour in addition to further treatment, spending a gruelling 15 months in hospital. But his family were told his cancer had returned in the autumn of 2017. 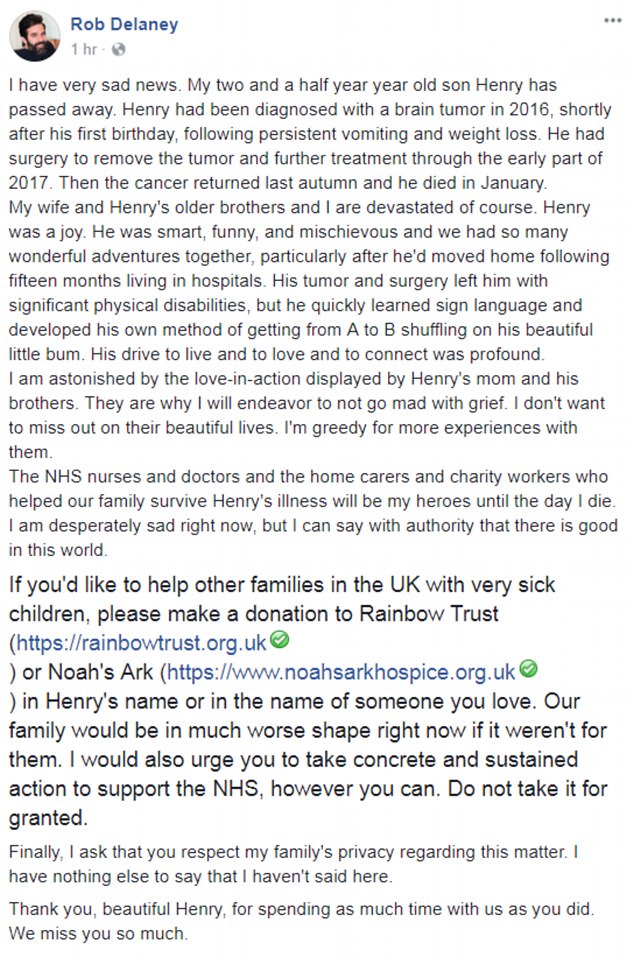 Devastating news: The actor announced the death of his youngest child in a heartfelt and moving tribute, in which he asked for donations to the charities which helped his family

While brain surgery had left his son with ‘significant physical disabilities’, the toddler found his own ways to overcome his challenges.

‘He quickly learned sign language and developed his own method of getting from A to B shuffling on his beautiful little bum,’ Delaney wrote at the time.

‘His drive to live and to love and to connect was profound.’

Delaney also paid tribute to the NHS staff who cared for his son, saying Henry’s doctors and nurses would be ‘my heroes until the day I die’.

He also praised the support the family had received from the charities Rainbow Trust, and Noah’s Ark Children’s Hospice. 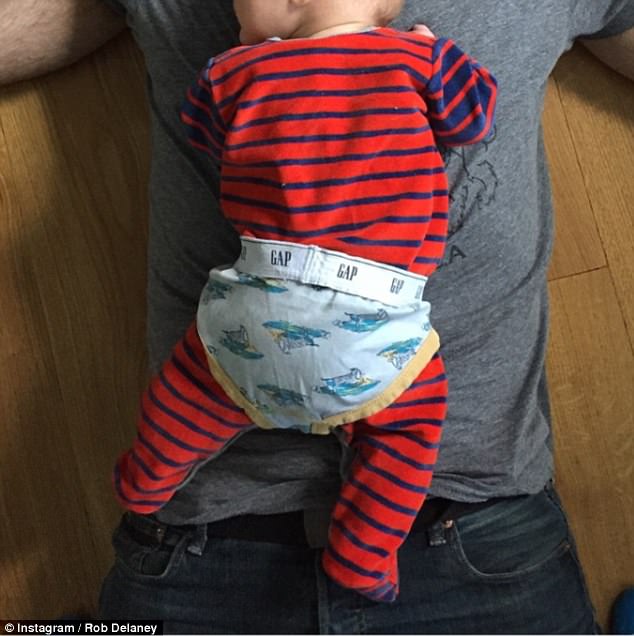 Touching: He shared this snap to Instagram captioned: ‘I put big boy underpants on my baby’ (pictured in May 2015)