Fancy your chances in the MLB? Rob Gronkowski leaves a final mark on his New England Patriots career by using the team’s newest Lombardi trophy as a baseball bat at Fenway Park

NFL legend Rob Gronkowski may have announced his retirement during this year’s offseason, but that didn’t stop him leaving one-last indelible mark on the New England Patriots’ legacy.

Famed for his off-field antics, and true to Gronk form, the Pats tight end managed to damage New England’s latest Lombardi trophy while trying to use it as a baseball bat.

The 29-year-old was one among a number of the team’s players invited to attend the Red Sox’s Opening Day rituals at Fenway Park last Tuesday, where they honored the field and tossed a ceremonial pitch ahead of the season’s first home game.

New England’s players also showed off their latest Super Bowl trophy to the crowd, having secured victory over the Los Angeles Rams in February. 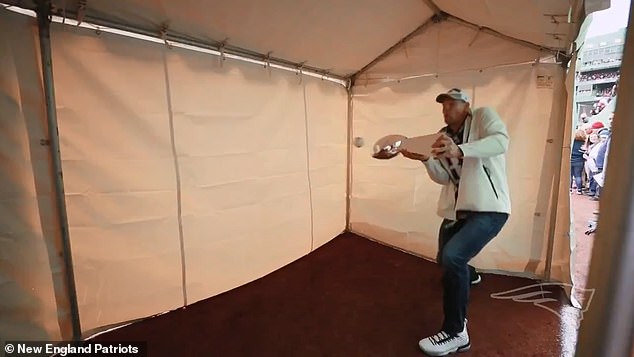 In a video captured by the NFL team, Gonk can be seen using the team’s lastest Lombardi trophy as a baseball bat before the Red Sock’s opening game 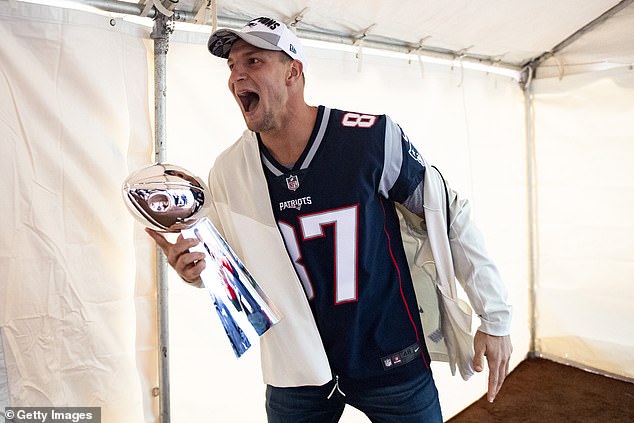 Laughing after making contact, a huge circular dent can be seen on the base of the football mount of the trophy 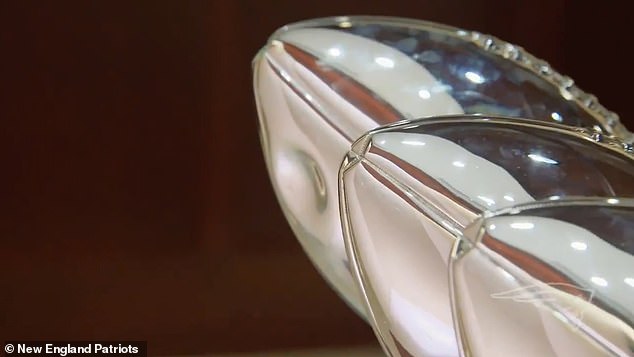 ‘If anybody could do it and get away with it, it’d be Mr. Gronkowski himself,’ teammate Duron Harmon mused, in a video documenting the incident

But what the crowd didn’t see, however, was Gronk causing significant damage to the trophy during an exuberant series of pregame festivities.

Thankfully the New England Patriots media team was on-hand to capture the amusing chain of events in a behind-the-scenes video.

Warming up to throw the first pitch alongside NFL MVP Julian Edelman, Gronk can be seen bursting into shot and taking up a batter’s stance with the Lombardi trophy in his grasp.

Fellow teammates Jason McCourty and Duron Harmon say they were convinced Gronk wasn’t actually going to use the trophy to swing at the incoming ball – but they were wrong. 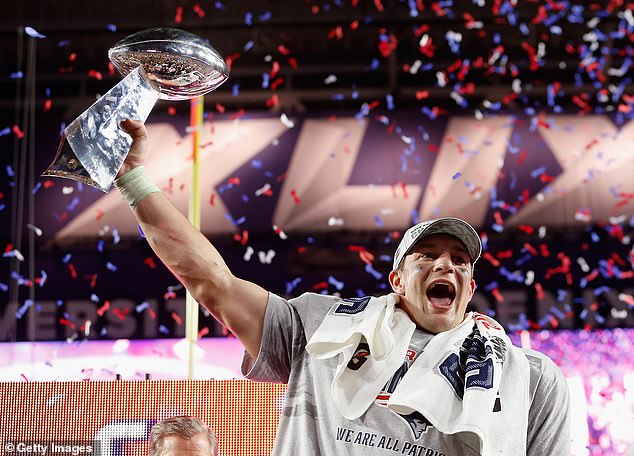 Gronkowski seen celebrating after securing Super Bowl victory of the Seattle Sea Hawks in 2015. The Hall of Famer is considered one of the best tight ends ever to play the game 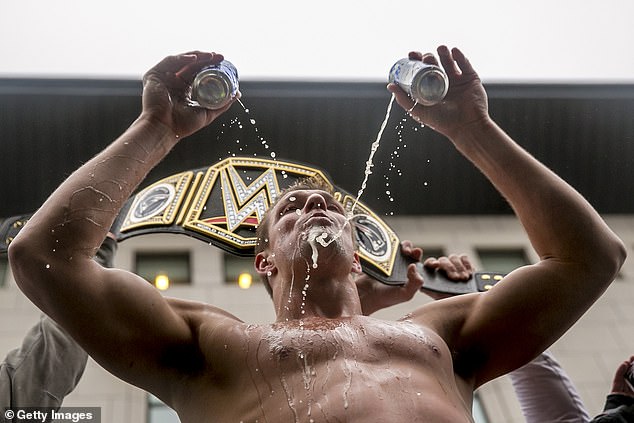 Winding up to meet Edelman’s pitch, Gronk connects fiercely with the baseball, leaving a large – and perfectly circular – dent on the front of the trophy’s football mount.

He then pretends to run to the first base before simulating being thrown out of the stadium.

‘If anybody could do it and get away with it, it’d be Mr. Gronkowski himself,’ Harmon mused.

Gronk – who played the entirety of his nine-year-career at the Patriots – was responsible for the most significant play at this year’s Super Bowl, when he hauled in a red zone reception that lead to the game’s only touchdown. 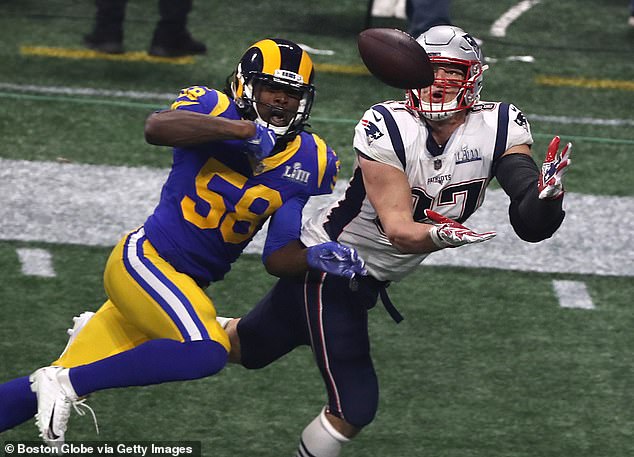 Tight end Rob Gronkowski makes key reception late during the fourth quarter in this year’s Superbowl. It lead to the game’s only touchdown

The trophy is the sixth in the franchise’s history, all of which have been won since February 2002.

Other Super Bowl-winning teams have replica trophies for use at public events while keeping the originals under lock and key, but the dented trophy is apparently the original from Super Bowl LIII.

Considered one of the best tight ends to ever play the game, Hall of Famer Gronkowski’s  mark on NFL history had already been cemented long-before Tuesday night – but he decided to leave a physical imprint behind anyway.