Robbie Williams sang duets with some England players and performed a special concert for the whole squad at the poolside of their World Cup hotel last night in Doha ahead of their crunch quarter final clash with France.

Music legend Robbie, 48 went to visit Gareth Southgate’s men on Wednesday night after arriving in the Qatari capital where he is performing at Doha Golf Club tonight.

England midfielder Kalvin Philips revealed during a press conference: ‘Robbie was here with us last night (Wednesday) by the pool he sang us a few songs, it was a really good night, he is unbelievably talented, so knowing how big he is and how well he is doing, it was an honour to have him here and meet him.

‘I have spoken to him. There were a couple of duets but I am not going to name names, it was a good night in general.’

Robbie sang duets alongside some England players. He promoted his show in Doha in a video on his Instagram, with Marcus Rashford and Harry Maguire 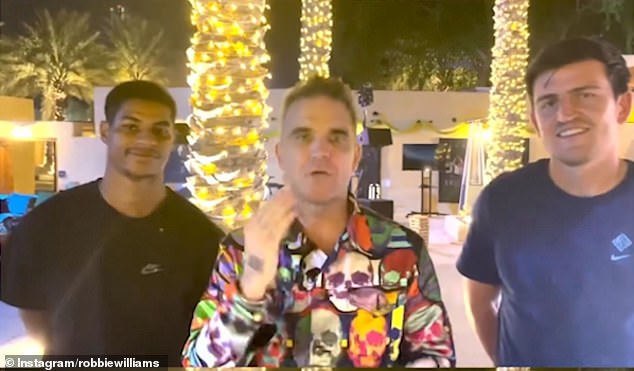 The Angels singer didn’t say which songs he had performed for ‘the lads’, or which of them had joined in

The Football Association confirmed: ‘It was just a private performance within an outdoor area of the team hotel, arranged via the players and enjoyed by all.’

It is not known which songs Robbie sang for the players and which of them sang along with him.

England face France in a crucial World Cup quarter final match at the Al Bayt stadium and Robbie is expected to attend.

His concert for the England team took place at the Souq Al Wakra hotel where they are staying and is located in the Al Wakra fishing village around 10 miles from central Doha.

Earlier, Robbie posted a video on Instagram showing him standing alongside Marcus Rashford and Harry Maguire. 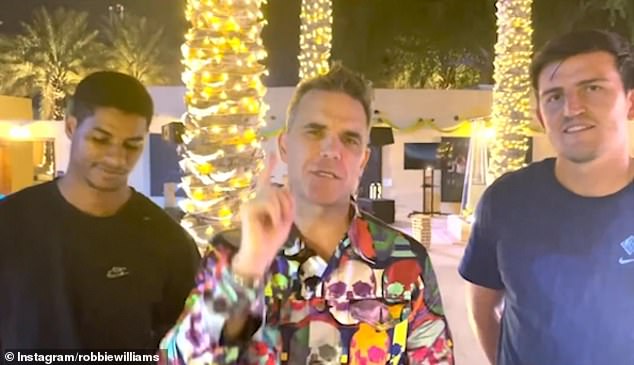 It has emerged that tickets for his midnight concert this evening at the luxurious Doha golf club, which cost around £150 each, have not sold out

Wearing a colourful shirt and standing in front of a brightly lit tree, he says: ‘Hi, I’m Robbie Williams. I’m at the England camp with the lads. How lucky am I? Come see me at the Doha Golf Club tonight. You know what to do.’

Robbie’s plea came as it emerged that tickets for his midnight concert at the luxurious golf club, which cost around £150 each, had not sold out.

The former Take That singer has been billed as one of the leading artists to perform on the side-lines of the World Cup.

The concert’s sponsors include Qatar Airways with organisers promising: ‘World-renowned English singer and songwriter Robert Peter Williams is all set to mesmerize fans with his live performance in the heart of the capital city of Doha.

‘The charismatic performer’s set will include singalong favourites like Let Me Entertain You, Feel and Angels. Get ready to sing and sway throughout the musical night.’

But the pop star has been widely criticised on social media for appearing in Qatar, in the same way David Beckham was slammed for becoming a poster boy for Qatar and the tournament. 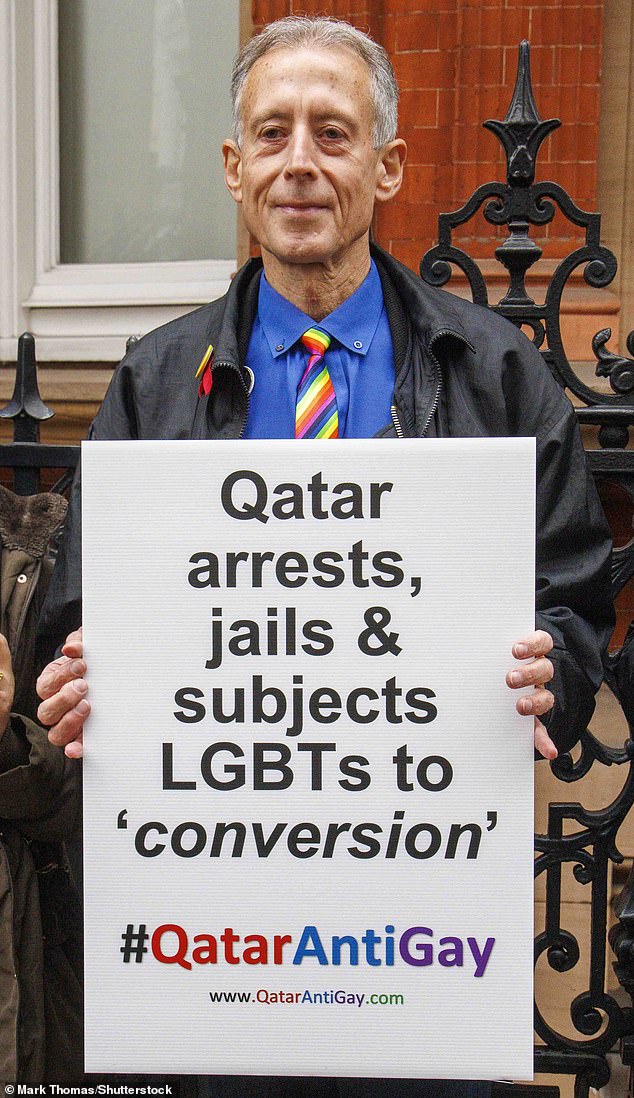 Leading LGBT activist Peter Tatchell said: He has put money before principles. It is a betrayal of Qatari women, LGBTs, migrant workers and everyone else persecuted by the dictatorship in Doha’

Britain’s leading gay rights activist Peter Tatchell warned the former Take That star that he was risking losing millions of fans over his decision to sing in a country where homosexuality is illegal.

Mr Tatchell told Mail Online: ‘I’m a big Robbie fan. But his decision to perform in Qatar is a huge disappointment.

‘He has put money before principles. It is a betrayal of Qatari women, LGBTs, migrant workers and everyone else persecuted by the dictatorship in Doha. ‘

But Robbie told Italian newspaper il Venerdi: ‘Anybody leaving messages saying ‘no to Qatar’ are doing so on Chinese technology.

‘You get this microscope that goes: “Okay, these are the baddies, and we need to rally against them.”

‘Of course, I don’t condone any abuses of human rights anywhere.’