A man who stabbed his friend because he believed he fathered his partner’s stillborn more than seven years prior to the attack has been sentenced to more than three years in prison.

District Court judge Mark Herron described the attack as ‘frightening, terrifying and traumatising’ when he jailed Robert David Sobasz, 32, for three years and five months for the November 2016 attack, according to the West Australian.

Sobasz climbed over George Davidson’s, 33, back fence and stabbed him repeatedly.

George Davidson was left with two black eyes, a broken nose and a ruptured liver after his friend Robert David Sobasz broke into his home in 2016 and attacked him

Mr Davidson heard a noise and went to the back of his Ellenbrook, Perth, home to see what was going on.

Thinking Sobasz was being chased Mr Davidson let him in to his home.

This is when Sobasz punched him in the head and pushed him down to the ground.

Sobasz then repeatedly punched and stabbed Mr Davidson in the arms, abdomen and chest.

He then grabbed Mr Davidson’s mobile phone and laptop and fled the home.

Mr Davidson was left with two black eyes, a broken nose and a ruptured liver during the attack. 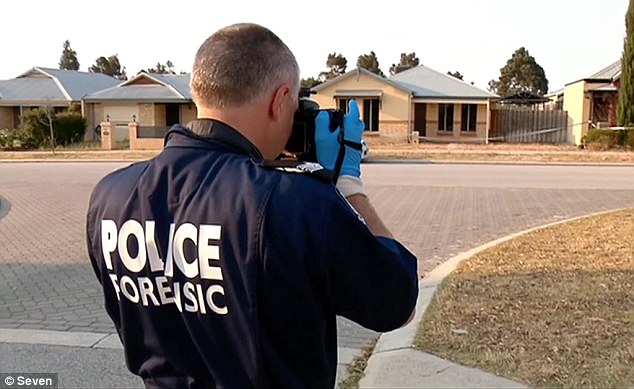 Sobasz will be eligible for parole in 20 months after his sentence was backdated to November 6, 2016

In a victim impact statement he said there was ’emotional trauma and fear he continues to suffer’.

Sobasz’s lawyer, Alana Padmanabham, told the court that on the morning of the attack he was told the stillborn child he had mourned for seven years was not his.

He believed it was Mr Davidson’s child instead despite his denial of ever have a sexual relationship with the woman.

Sobasz sentence was backdated to November 6, 2016.

He will be eligible for parole in 20 months.