They have starred in a huge number of screen projects together over the years, including The Godfather Part II, Righteous Kill and Heat.

And cinema icons Robert De Niro and Al Pacino reunited once again on Wednesday to film the upcoming crime drama The Irishman in the Bronx area of New York City – with longtime collaborator, Martin Scorsese, in the director’s chair.

The 74-year-old De Niro wore a retro blue trench coat over a white collared shirt with a brown tie with diagonal stripes, as he embarked on another day of filming with his famous co-star.

5ft10 De Niro wore black trousers and, most noticeably, black dress shoes with sizable lifts – with character Sheeran standing at 6ft4 – as he walked alongside Pacino in front of a large green screen.

In the period piece, which is based on based on the 2004 book I Heard You Paint Houses, De Niro portrays purported hit-man Frank ‘The Irishman’ Sheeran to Pacino’s role of Teamster boss Jimmy Hoffa.

Pacino, 77, wore a dark grey coat over a white collared shirt with a red tie and grey slacks, and had his hair slicked back in the scene alongside his celebrated peer.

It’s the latest creation from De Niro and Scorsese, who’ve worked together on timeless film such as Goodfellas, The King of Comedy, Cape Fear and Raging Bull – which garnered the actor his second Academy Award in 1981. 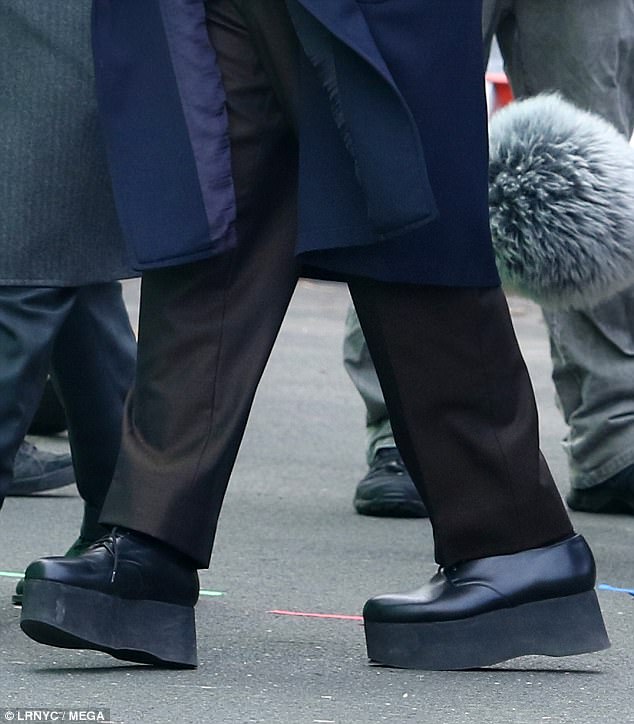 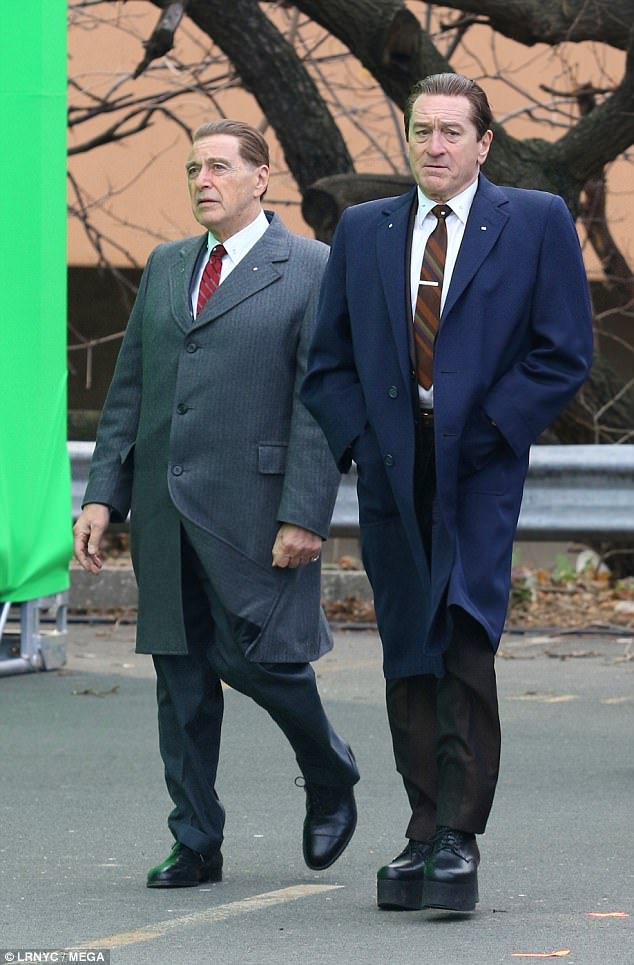 Star-crossed: Pacino and De Niro have appeared onscreen in past films such as Heat, Righteous Kill and The Godfather: Part II 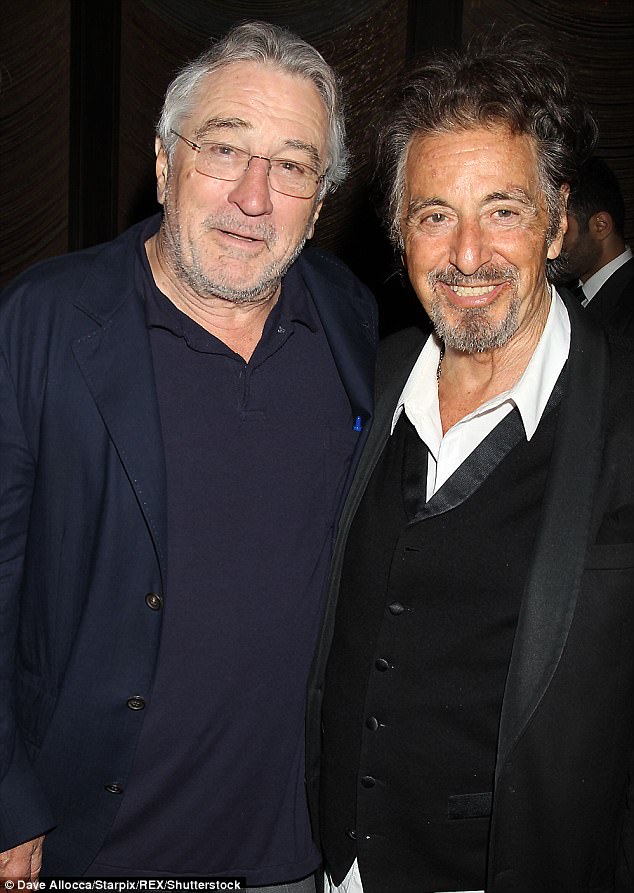 Taking the lead: The duo were worlds away from their usual selves in their criminal character costumes (pictured together in April 2017)

As with many of Scorsese’s films, the cast is an ensemble of the acting elite, also including Oscar-winners Joe Pesci, who plays mobster Russell Bufalino, andAnna Paquin, who plays the daughter of De Niro’s character, Peggy Sheeran.

The film is slated to wrap filming this month, after an extended string of events that’s cast plenty of uncertainty over various aspects of production and distribution. 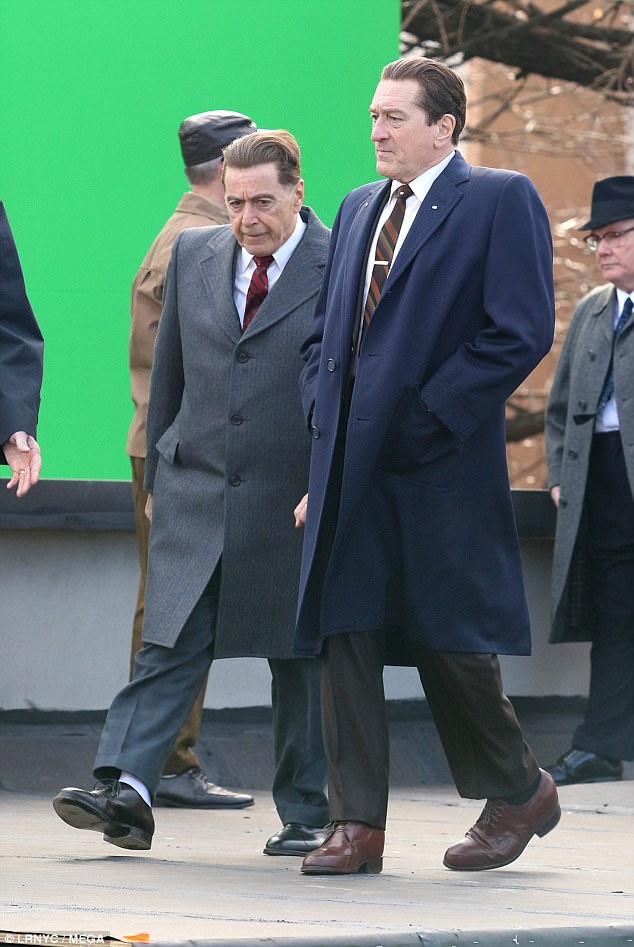 Flashback: The venerable actors were both costumed in suits synonymous with the 1970s 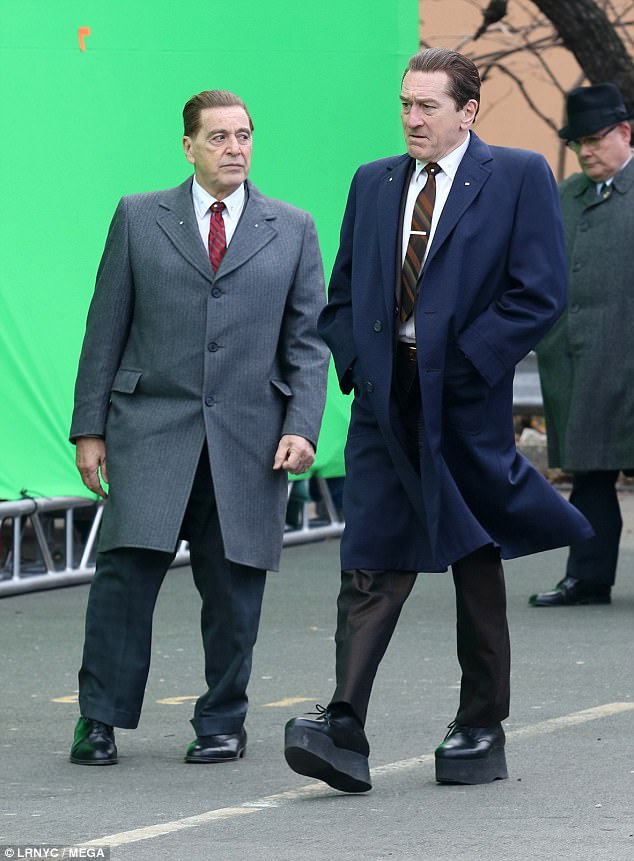 Focused: The New York native was undaunted as he performed in thick shoe lifts in the Bronx

Paramount and Mexican producer Fábrica de Cine were initially tied to the film, but both dropped out amid its soaring budget.

Netflix eventually purchased the rights to the motion picture for $105 million and and covered budget costs, which have risen to $125 million.

Some questions have arisen about the medium in which the film will be distributed as last month, Netflix’s head of film publicity Julie Fontaine told Variety that ‘it’s premature to say anything at this point’ in regards to its release.

Netflix film division chief Scott Stuber promised Scorsese it will be released theatrically for at least two weeks, which would in turn, make it eligible for an Academy Award, sources told the trade publication. 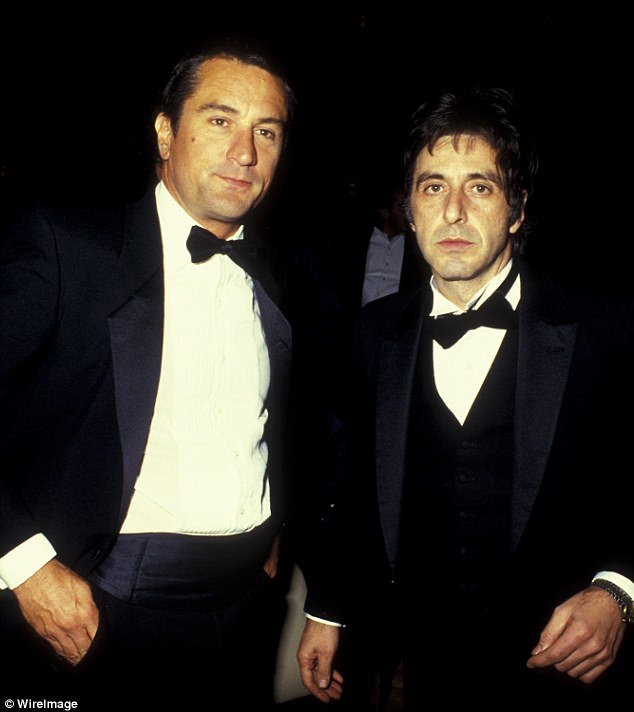 Back in the day: DeNiro and Pacino have worked together on a number of films over the years (pictured in 1987)

The project sees DeNiro resume his working schedule for the end of 2017, after pulling out of an Amazon series with Julianne Moore in October, due to the recent sexual harrassment scandal in Hollywood.

The crime drama was set to be directed by David O’Russell and produced by The Weinstein Company, but was dropped following his numerous allegations of sexual abuse and harassment from actresses, models and producers in the industry.

‘In light of recent news and out of respect for all those affected we have decided together that it is best to not move forward with this show.’ 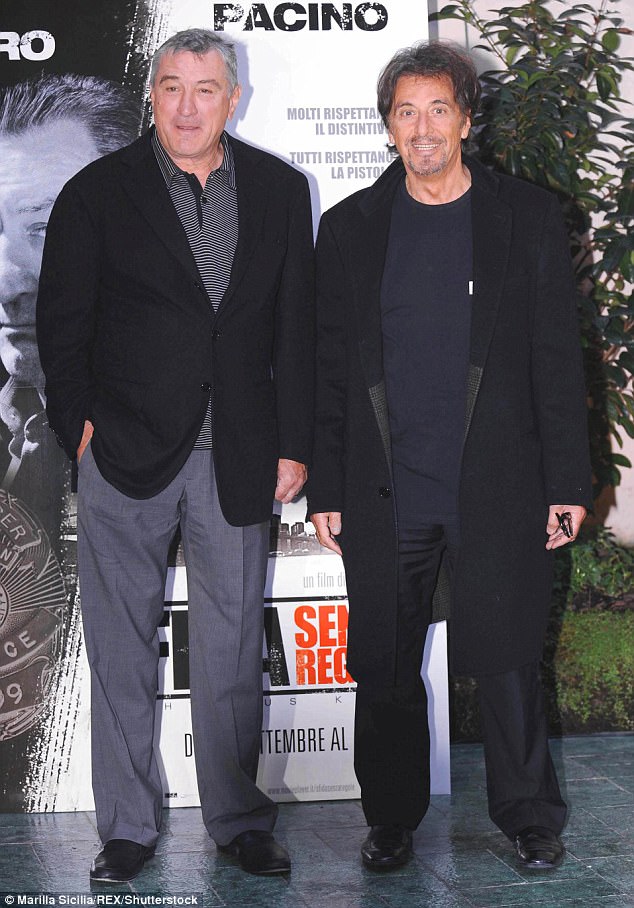 Main men: They starred in criminal drama Heat back in 1995, before reuniting for Righteous Kill in 2008 (pictured at the Rome premiere that year)