Robert DeNiro repeated calls for Donald Trump to be impeached during an interview with CNN where he referred to the president as a ‘gangster’ who may be mentally ill.

Never one to be shy about his feelings toward Trump, DeNiro praised House Democrats’ recent decision to open an impeachment inquiry on Reliable Sources with Brian Stetler on Sunday morning.

DeNiro said he doesn’t think Trump is ‘capable’ of resigning and that he fears the president would refuse to leave the White House even if Congress votes to impeach him.

‘He’ll say it’s rigged, this or that,’ DeNiro said. ‘This guy has done everything possible, much worse than I ever thought ever. The day after he was elected I said, give him a chance. You’ll never know. He is worse than I ever could have imagined.’

Pressed by Stetler to specify why he’s so anti-Trump, DeNiro replied: ‘I don’t know. I think he’s crazy in a way. Part of him is just crazy.

‘Possibly medically, too, I’m starting to think,’ he added.

‘When I saw him out in front of the helicopter waiting to go somewhere and talking endlessly and sweating, I said: “This guy is not even aware of what he’s [doing]. He should at least ask somebody for a handkerchief or something and dry himself off.”

‘I mean, where are we? This is a crazy world. What is going on? This guy is crazy. We’ve got to get him out.’ 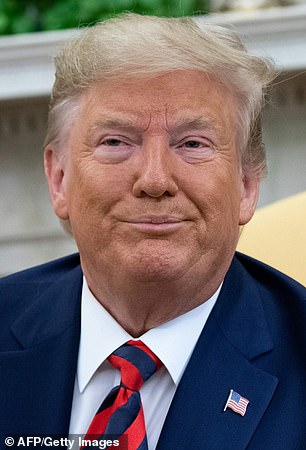 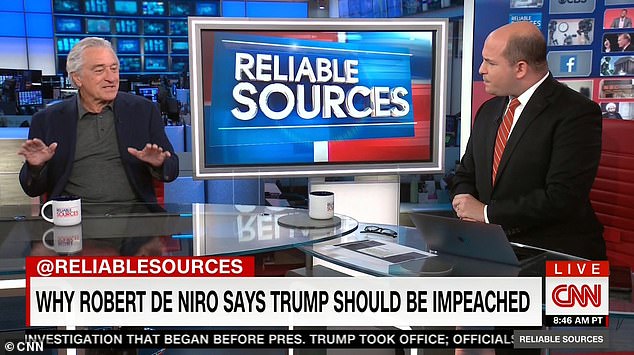 Stetler asked DeNiro: ‘Do you ever look at the president and think he’s performing like he’s playing an act or something?’

The actor said he thinks ‘in some ways’ Trump is performing, before accusing Fox News commentators of doing the same.

‘I can’t believe that they would actually buy into this craziness,’ DeNiro said of ‘these pundits on Fox’.

‘This guy should not be president, period.’

Stetler mentioned that DeNiro has come under fire from Fox commentators for his past criticisms of the president, specifically after he declared ‘F*** Trump’ during a speech at the Tony Awards in 2018.

He went on to explain why he continues to share his vitriolic feelings toward the president publicly despite the harsh backlash.

‘We are in a moment in our lives, in this country, where this guy is like a gangster,’ DeNiro said. 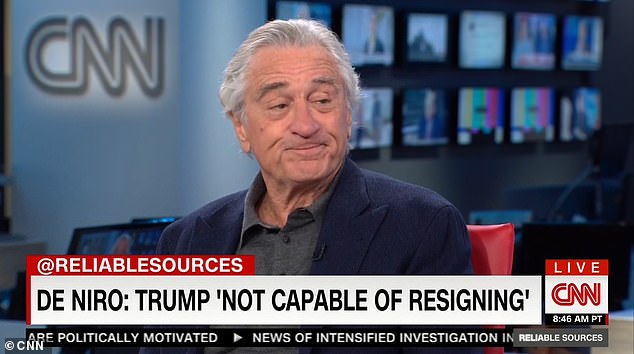 Stetler also asked DeNiro whether he’ll be reprising his role as special counsel Robert Mueller on Saturday Night Live, which premiered its new season this weekend.

The actor said he’s unsure whether he’ll be back on the show this fall but revealed that he’d pitched a new skit for the Mueller character.

DeNiro didn’t say how the producers responded to that idea.

The CNN interview was part of DeNiro’s press tour for his new Netflix film The Irishman, starring himself, Al Pacino and Joe Pesci, and directed by Martin Scorcese.

It came less than a week after House Democrats launched an impeachment inquiry amid allegations that Trump pressured his counterpart in Ukraine to investigate Joe Biden. 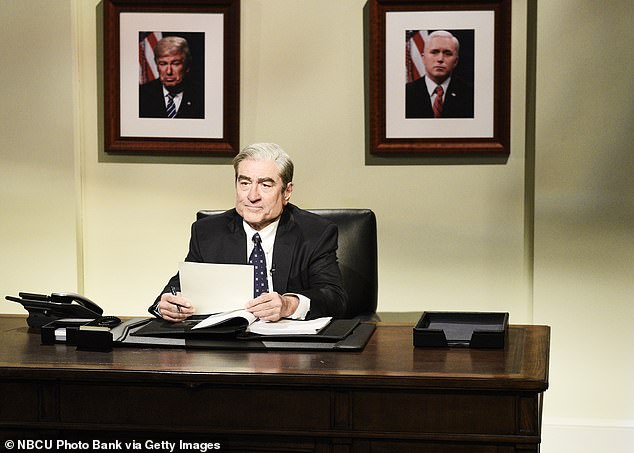