A school board in northern Virginia has voted to re-name a high school dedicated to Confederate General Robert E. Lee to honor late Congressman and civil rights icon John Lewis.

The Fairfax County School Board, the largest school system in Virginia, on Thursday voted to change the Springfield school’s name to John R. Lewis High School.

Built in 1958, Robert E. Lee High was originally named to signal the school board of that era’s opposition to racial integration of schools.

The school was also build in the Lee District, a political subdivision of Fairfax County, which may have been named for the Confederate General Fitzhugh Lee, or other members of that Lee family closely associated with Virginia and Fairfax County. 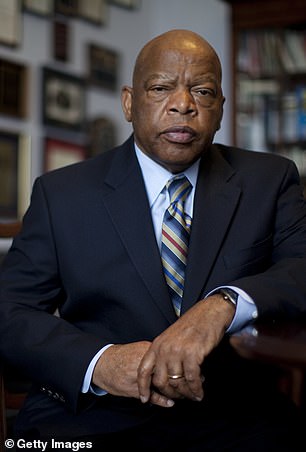 Built in 1958, Robert E. Lee High (above) was originally named to signal the Fairfax school board of that era’s opposition to racial integration of schools

Thursday’s name change followed a one-month comment period for members of the public to suggest new names for the school. Lewis passed away on July 17 at the age of 80.

‘The Board heard from students, teachers and staff members, families, and the community about the old name,’ said School Board Chair Ricardy Anderson at a meeting conducted over Zoom, according to WTTG-TV.

‘It was important for us to be mindful of these comments and to select a name that reflected the diversity and multiculturalism that currently exists at the school and in our community,’ he continued.

‘Rep. Lewis was a champion of the Civil Rights movement, and our Board strongly believes this is an appropriate tribute to an individual who is a true American hero,’ Anderson said.

‘We will also honor his life’s work by continuing to promote equity, justice, tolerance and service in the work that we do.’ 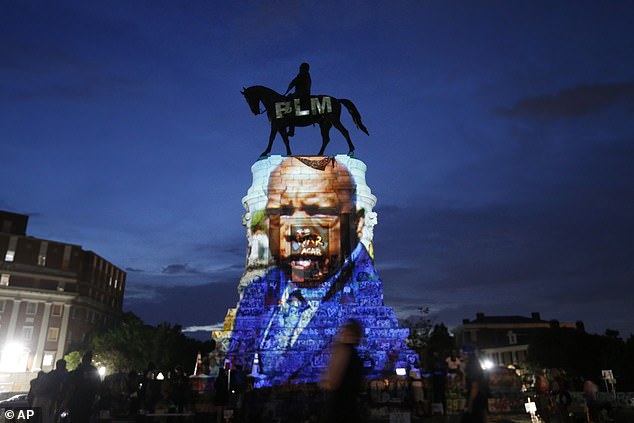 An image of the late Georgia Congressman and civil rights pioneer John Lewis is projected on to the pedestal of the statue of confederate Gen. Robert E. Lee in Richmond, Va. on Wednesday

Since June 29, at least five other schools previously named for Confederate generals have had their names changed, including schools in Louisiana, Texas, West Virginia and Virginia.

At the beginning of June 2020, at least 208 schools in 18 states were named for men with ties to the Confederacy, according to an Education Week analysis of federal data.

Robert E. Lee is by far the most popular Confederate namesake, the data show, followed by General Stonewall Jackson.

Meanwhile, a mostly white high school in northern Mississippi is retiring Confederates as the name of its sports teams.

Caledonia has used the mascot since 1957, and it is often abbreviated to Feds.

The Lowndes County school board voted to drop the name after local residents expressed concerns about the image it portrays.

Who was Robert E. Lee?

Robert E. Lee, one of the U.S. Army’s most brilliant officers prior to the Civil War, turned down President Lincoln’s offer of a Union command to join the Confederacy despite personally opposing the secession of pro-slavery states.

‘If I owned the four millions of slaves in the South I would sacrifice them all to the Union; but how can I draw my sword upon Virginia, my native state?’ Lee is said to have replied when offered a senior U.S. command at the dawn of the war.

In resigning his U.S. Army commission, Lee also expressed skepticism about the legitimacy of a ‘Union that can only be maintained by swords and bayonets.’

For the Confederacy, he commanded the Army of Northern Virginia.

He had victories in the Seven Days Battles and the second Bull Run, but led the rebels to the pivotal defeat at Gettysburg.

Lee held off General Ulysses S. Grant from complete victory, then personally surrendered at Appomattox as General in Chief.

A slaveholder himself, Lee nevertheless expressed conflicted reservations about slavery through his life. In an 1856 letter to his wife, he maintained that slavery was a great evil, but primarily due to negative impact he believed it had on white people.

After the war, he backed the end of slavery and supported reunification, but said black people ‘lack intelligence.’