There can be few places on Earth more infused with evil than this – the railhead at Auschwitz; the spot where countless families were savagely wrenched apart for eternity; where a click of the fingers dictated death now or death later; the end of the line in every sense three quarters of a century back.

And it was here last night, between the wreckage of two gas chambers, that some of the surviving witnesses to the greatest crime in modern history came with world leaders to lay candles and to declare: never again.

It had been 75 years ago this very day that advancing Soviet forces had liberated Auschwitz, the date the world now chooses to mark Holocaust Memorial Day.

While events were taking place around the world – with the Duke and Duchess of Cambridge and the Prime Minister joining survivors and families in London last night – the main international ceremony was unfolding at the ghastliest concentration camp of them all.

It had been 75 years ago this very day that advancing Soviet forces had liberated Auschwitz, the date the world now chooses to mark Holocaust Memorial Day. Pictured: A survivor of Auschwitz at last night’s ceremony

Walking slowly but purposefully, driven by the tungsten resolve of those who have known the depths of man’s inhumanity to man and never want to see it again, 200 survivors took their seats at the main ceremony.

Many wore caps or scarves with the same blue and white stripes that once marked them out as prisoners. In front of them stood the notorious arched watchtower – the ‘Gate of Death’ – which stands at the entrance to Birkenau, once the heart of the vast Auschwitz extermination complex.

Here, too, were heads of state including the kings and queens of Holland and Spain and several presidents (including those of Germany and Israel). The Duchess of Cornwall represented the UK.

Afterwards, the leaders of all the national delegations, along with a handful of survivors, walked the final stretch of railway track to the Auschwitz monument, half a mile inside the camp.

Through the gloom, they passed beneath the same watchtowers and fences which had greeted those terrified new arrivals tumbling out of their stinking cattle trucks 75 ago.

At the monument itself – a communist-era wall of stone and concrete lined with commemorative plaques in every language – the Duchess of Cornwall laid her candle at the English language plaque. It states: ‘Forever let this place be a cry of despair and a warning to humanity, where the Nazis murdered about one and a half million men, women and children, mainly Jews.’

On either side stood the ruins of the crematoria which served Gas Chambers II and III.

It was here that the dreaded ‘selections’ took place, just after each train or ‘transport’ had clanked to a halt; men and women separated into lines before each line was split again. 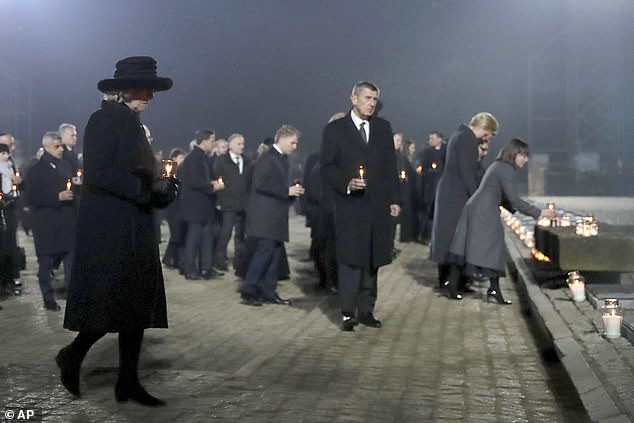 It was here last night, between the wreckage of two gas chambers, that some of the surviving witnesses to the greatest crime in modern history came with world leaders to lay candles and to declare: never again. Pictured: The Duchess of Cornwall at last night’s ceremony

The very young and the old would be sent one way for instant execution while those earmarked for slave labour would be sent the other.

Amid depravity on such an industrial scale, it was the small personal details which had the greatest impact on yesterday’s audience.

Bat-Sheva Dagan, 94, originally from Poland, spoke of being ordered to sort through the belongings of the dead and her horror at finding a photo of her schoolteacher.

Else Baker, who was sent to Auschwitz from Hamburg as a little girl because of her mother’s gipsy heritage, was so overcome by it all that she had to ask a helper to finish reading her speech.

It included an eight-year-old’s horror on overhearing adult gossip that the Germans had run out of gas and had resorted to burning prisoners alive.

Rounding off the proceedings was the president of the World Jewish Congress, Ronald Lauder, son of the late cosmetics magnate, Estée Lauder. A former US ambassador to Austria, he has devoted much of his life and fortune to preserving Auschwitz as a memorial and assisting survivors who want to return. 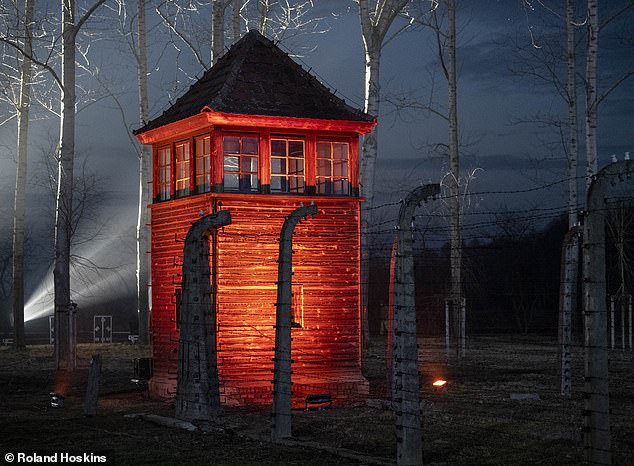 Addressing yesterday’s main event, he reduced many to tears with the chilling testimony of an Auschwitz survivor who could only look on helplessly as his young daughter, in her little red coat, was gradually swallowed up into the herd of new arrivals heading straight for the gas chambers.

To this day, said Mr Lauder, he could not see a child in a little red coat without faltering.

What has made this anniversary even more poignant is the fact that the large majority of today’s survivors were children during the Holocaust. Their memories are not just painfully vivid but seen through the prism of a child’s mind.

These elderly men and women don’t tell you about the rise of national socialism so much as the day that a happy childhood suddenly soured, the morning when a schoolfriend suddenly hit them for being Jewish, the moment when a parent’s brave attempts at preserving normality suddenly crumbled in the face of some random act of unspeakable violence.

A recurring narrative was the descent from one squalid ghetto tenement to another before the bashing on the door in the dead of night and the herding of entire families into putrid cattle wagons. All would recall the sudden terror of Auschwitz – the yelling, the dogs and the shock of separation.

The saddest part of so many tragic stories I have heard this week has been survivors welling up as they admit they have spent their entire lives wishing they could have had one last kiss and hug from a mother or father who, instead, simply vanished. Yet they had all insisted on making one last journey back.

They found the dreaded watchtower encased in a giant marquee with seating (and heaters) laid out below for the main formalities. Once, this ceremony might have taken place in the open air.

However, it was decided that if the survivors were going to spend several hours seated with the world leaders, they should do so in a warm tent. Even so, it was never going to be an easy return.

Miriam Ziegler admitted that on her first return to Auschwitz, in 1982, she had been so overwhelmed that she asked her husband to get her away as quickly as possible. Despite the protestations of her family, she had insisted on coming back for yesterday’s event.

She could well remember the liberation of the camp, she told me. Indeed she features in one of the most famous images of that day, a Soviet Army photo of a group of children huddled behind an Auschwitz fence.

What she still cannot recall are the exact circumstances before that moment. For Miriam was a child victim of the unspeakable experiments of camp doctor Josef Mengele. ‘I remember the table and the medical implements but I have managed to blank everything else from my mind,’ she said. ‘It was just my way of coping.’

To this day, she has no idea precisely what Mengele did to her.

Among the British delegation accompanying the Duchess of Cornwall were two Londoners who survived the Holocaust. Renee Salt lived through both Auschwitz and Belsen and found the latter worse. It was also where she lost her mother.

‘I never wanted to come back here but the first time I did, I think it helped to lay a ghost,’ she told me.

Having made several visits since, she said, yesterday’s trip would be her last. She was joined by Hannah Lewis, who had been imprisoned at another Nazi camp, Adampol, when she too lost her mother, shot dead in cold blood by a roving SS hit squad.

Both women regularly address schools on behalf of the Holocaust Educational Trust. Though it pains them to do so, they do it out of a sense of duty – and a fear that anti-Semitism is, once again, on the rise.

It is why these survivors will keep talking until the bitter end. Tomorrow, another Auschwitz survivor, Eva Schloss, will address a meeting in London organised by the Foreign Office and the Israeli Embassy. Eva is the step-sister of Anne Frank, the girl whose diary of hiding from the Nazis in occupied Amsterdam touched the world.

Eva’s memories of Anne are of a pretty, vivacious girl – ‘not a tomboy like me’ – but it is the horror of being parted from her mother which is still etched in her mind all these years later.

‘She was selected for gassing and I thought I’d never see her again. I almost gave up after that,’ Eva says. Miraculously, her mother survived and went on to marry Otto Frank, Anne’s widowed father, eight years after the war.

Even so, it took decades before Eva could bring herself to speak about it. As Bat-Sheva Dagan said yesterday: ‘You can open a dictionary but you will never find a phrase that can describe the depravity of Auschwitz.’