At least there was one point on which Remainer and Brexiteer could agree on Friday night. This was a very British farewell. There were no hysterics, no wailing or pyrotechnics.

Yet no one could be in any doubt about the magnitude of the moment, fireworks or no fireworks.

After all the polarised nastiness of the past three years, Britain’s departure from the European Union was for the most part good-natured but tinged with a sense of weariness.

There might have been assorted celebrations and wakes taking place across the nation, including ‘Leave A Light On For EU’ candle-lit vigils in Scotland and two Brexit rallies in central London. 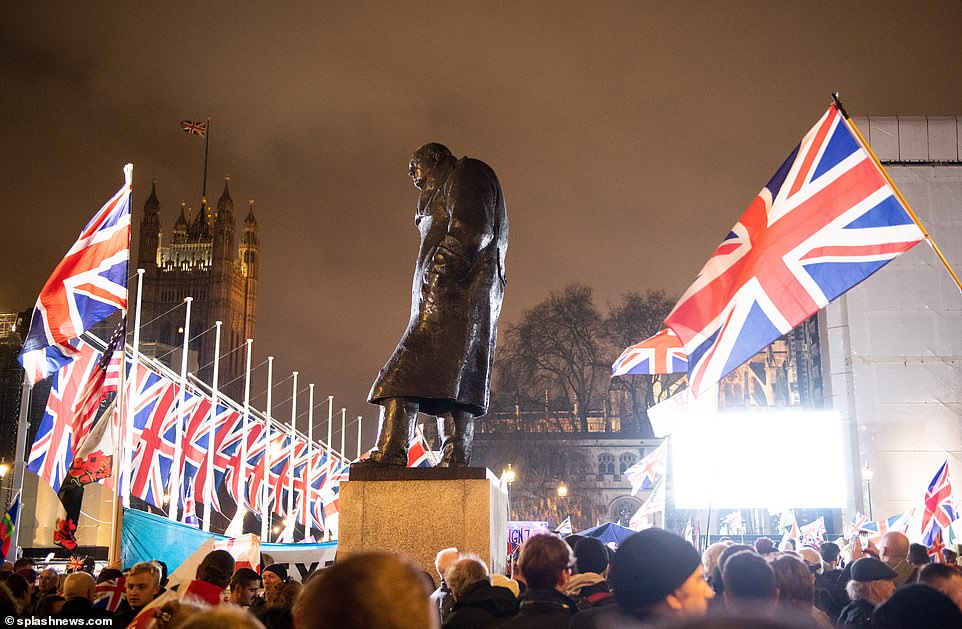 Members of the public gather in Parliament Square on Brexit day 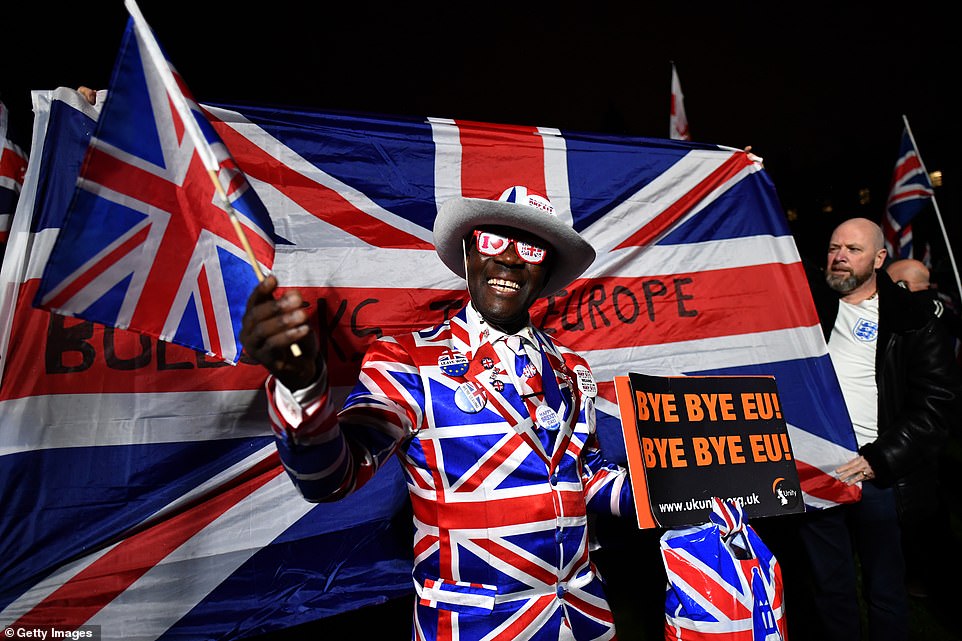 But no one was swinging from the chandeliers. Even among the ultras of the Leave brigade, gathered in Parliament Square last night, the mood was more one of boisterous pride and contentment than euphoria.

For some of the older members of the crowd, this was the culmination of almost half a century’s political activism.

Yet most seemed content to sing Rule Britannia and wave a flag rather than discuss WTO rules and free trade agreements. As for all those diehard Remainers, who once besieged this place daily draped in EU flags, I saw just one yesterday. He did not stay long.

In the end, it went off with neither a bong nor much of a bang. Big Ben, wreathed in scaffolding, remained silent as the clock reached the 11pm quitting hour.

In the absence of Big Ben, the chimes were left to Tony Appleton, 80, the bell-ringing town crier of Chelmsford, and a mini-belfry on a handcart called ‘Little Ben’.

The Prime Minister had gone for understated patriotism, commissioning a red, white and blue light show for Downing Street and Whitehall plus Union flags on every flagpole.

But there were none of the expensive fancy stunts we saw when a previous Conservative government took Britain in to Europe.

Shortly before the big moment, Boris Johnson appeared on television to deliver a blend of folksy fireside chat and a glimpse of the sunlit uplands.

‘This is not an end but a beginning,’ he said, channelling the post-Alamein words of his hero Winston Churchill. ‘This is the moment when the dawn breaks and the curtain goes up on a new act in our great national drama.’

There was, it must be said, a certain crack-of-dawn look to the PM. Though this was surely an occasion for the Downing Street comb, it had clearly been mislaid. 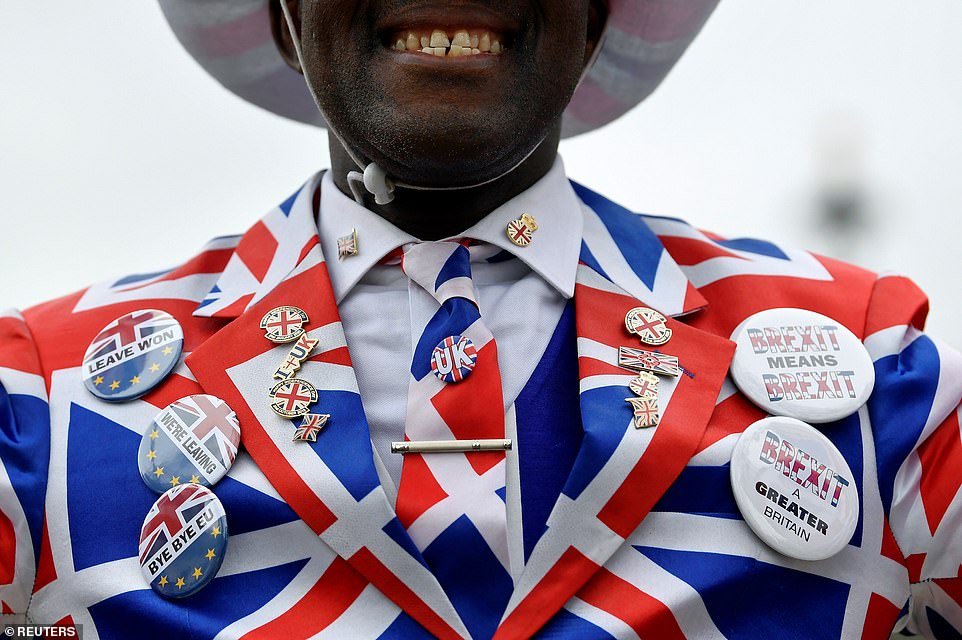 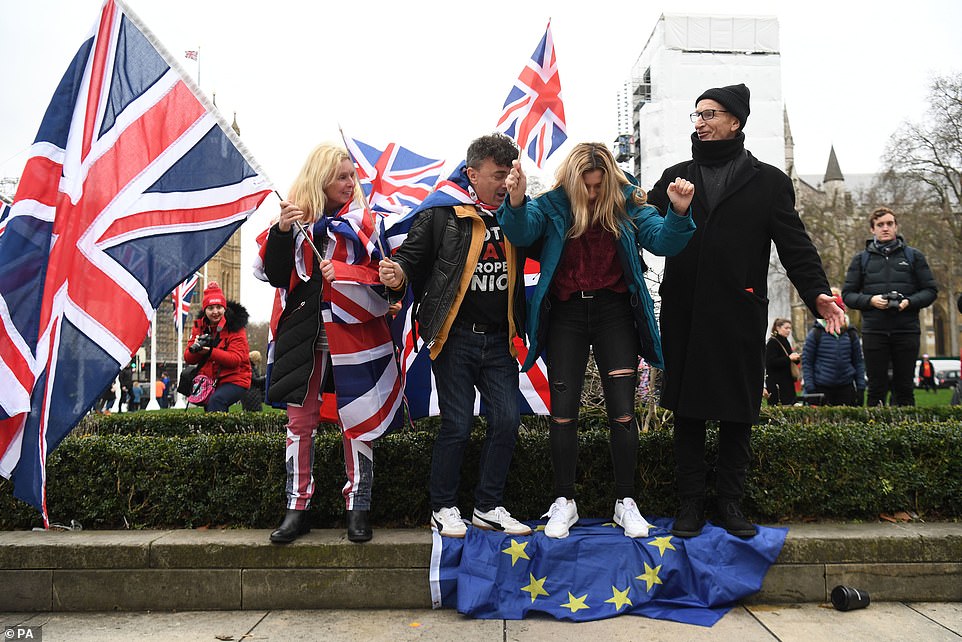 Brexiteers stand on the EU Flag, ahead of the UK leaving the European Union at 11pm on Friday

Outside, there were no speakers and screens to relay his words to the masses across the capital. Nigel Farage and his Brexit battalions had been left to bring their own portable stage.

Contrast last night’s event to the great hullabaloo when we joined the European Economic Community at one minute past midnight on January 1, 1973.

Back then, a special Whitehall unit had spent more than a year planning a series of national celebrations under the banner of ‘Fanfare for Europe’. The festivities ran for days on end either side of the magic moment.

There was a Fanfare for Europe football match at Wembley between the existing EEC nations and the newcomers (the UK, Ireland and Denmark – who won 2-0).

The Queen and other members of the Royal Family turned out at the Royal Opera House for a Fanfare for Europe gala evening of European culture, including readings by Laurence Olivier and Judi Dench.

There was even an attempt to dragoon the Prince of Wales into taking part in a special European edition of the ITV talent show Opportunity Knocks (he declined).

On Friday night, The Mall looked spectacular with every flagpole decked out with the Union flag, a sight we normally see only in June for the Queen’s birthday parade. 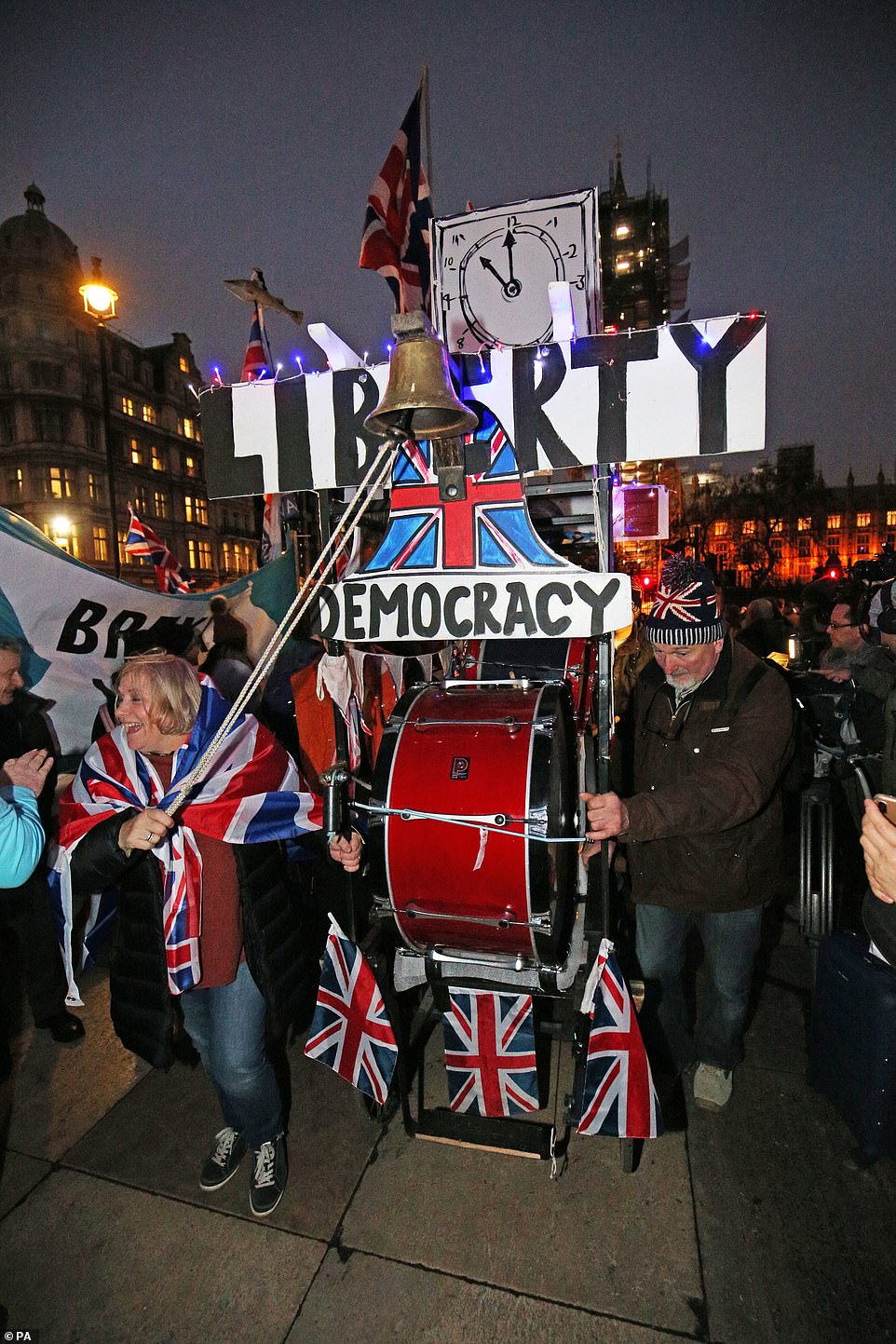 Pro-EU supporters in Parliament Square, London on Friday. The Queen and other members of the Royal Family turned out at the Royal Opera House for a Fanfare for Europe gala evening of European culture, including readings by Laurence Olivier and Judi Dench 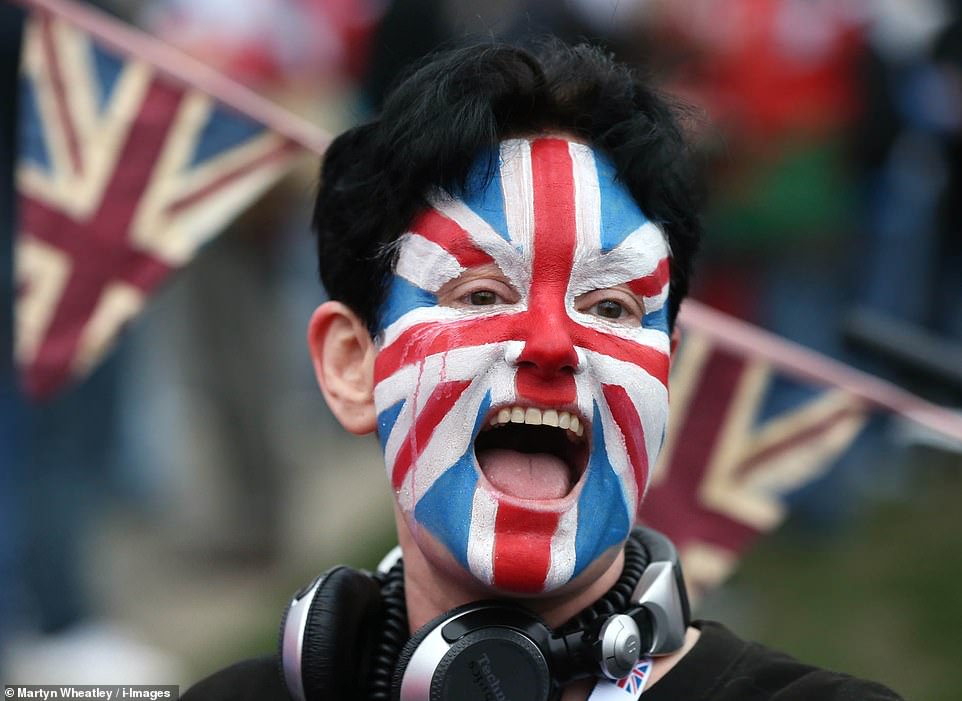 Yet no one could be in any doubt about the magnitude of the moment, fireworks or no fireworks 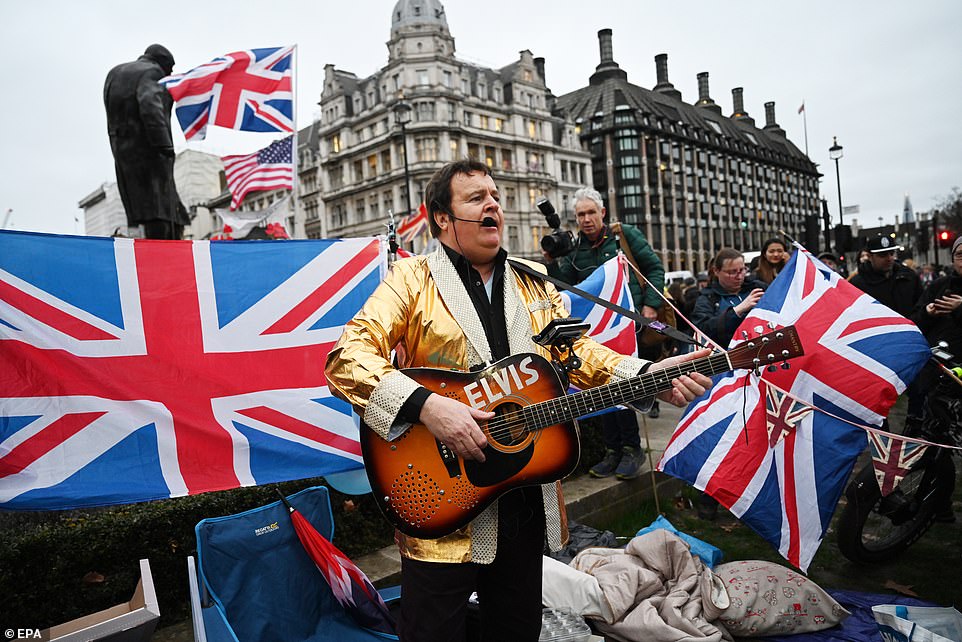 At least there was one point on which Remainer and Brexiteer could agree on Friday night. This was a very British farewell. There were no hysterics, no wailing or pyrotechnics

That, however, was a Government decision, not a Palace one. The Royal Family themselves were keeping a low profile on Friday night.

While the Prime Minister held a modest drinks party for some of his ministers inside Downing Street, a number of private Brexit parties were under way across the capital.

Among the most sought-after invitations was the ‘Britain Leaving The European Union’ dinner at 5 Hertford Street, the private members’ club in Mayfair.

Here more than 100 leading lights of the Leave movement, including Sir Iain Duncan Smith, Bill Cash and Sir Bernard Jenkin, heard Churchill’s biographer Andrew Roberts put the moment in context: ‘I’ve heard many things described as ‘historic’ – football matches, TV programmes, even a speech by Theresa May. But, as an historian, I can guarantee and certify for you that Brexit night truly is historic.’

So much for the plague of locusts we had once been promised come this day. Remember all those predictions of food and drug shortages? Back in December 2018, Kent County Council was even warning that ‘dead bodies may remain uncollected’.

Next came dark talk of gridlock across the South East.

When I checked in with Kent Police last night, their chief concern was a spate of thefts in the Tonbridge area. And the only thing threatening the smooth flow of traffic through Dover docks? England rugby fans heading for Sunday’s big game in Paris.