The younger generations may continue to draw more and more of the limelight. We may gently sense a passing of the baton to heirs and successors – be it at the Cenotaph or at Palace investitures or when it comes to buttering up world leaders.

Yet there was no question of who remains firmly at the helm of the ship of state yesterday as the Queen led the Royal Family in prayer at St Mary Magdalene, Sandringham.

There was no Prince Philip at her side on Christmas morning for only the third time in 71 years of marriage (the 97-year-old Duke was said to be in good spirits but erring on the side of caution on a chilly Norfolk day). Yet the Queen looked anything but downcast as the rest of the family bobbed and bowed and followed behind her. 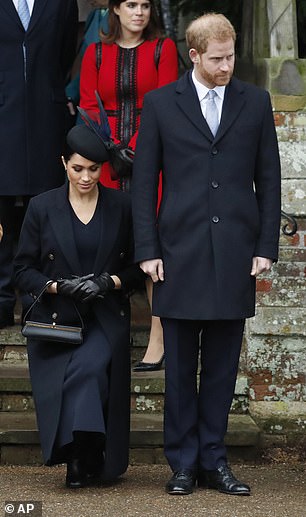 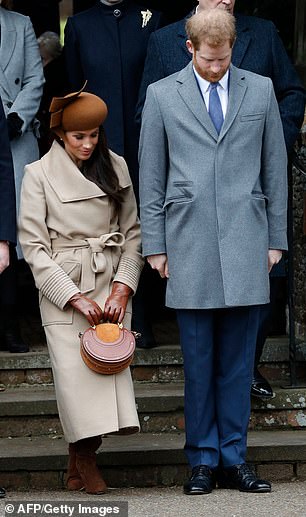 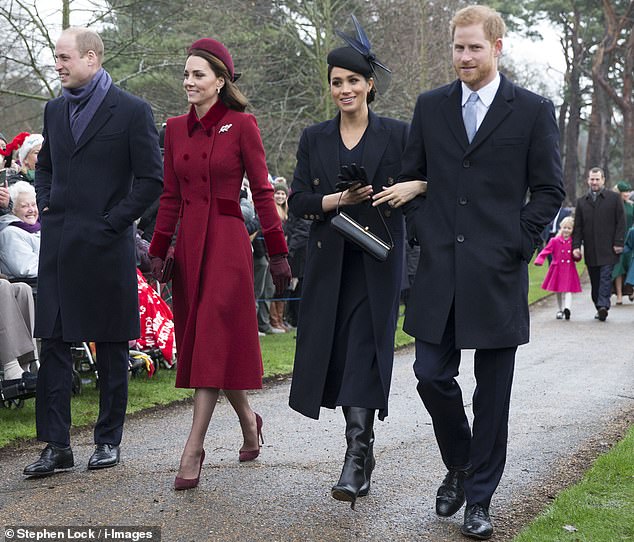 All eyes, understandably, were on the Duke and Duchess of Sussex, spending their first Christmas as a married couple

All eyes, understandably, were on the Duke and Duchess of Sussex, spending their first Christmas as a married couple. The beaming duchess looked delighted to be there, managing a deep curtsy to the Queen and chatting animatedly with her sister-in-law, the Duchess of Cambridge, as they walked to and from the big house (with zero sign of any rift in that quarter).

After seven months as an official member of the royal family, the Duchess of Sussex finally looks to have mastered her curtsy.

Meghan’s attempt last Christmas was eclipsed by the Duchess of Cambridge, with the former actress’s curtsy to the Queen at Sandringham church dubbed a ‘wobbly bob’. Yesterday, though, she was much more assured, dipping confidently with her legs crossed at the ankles and her expression composed – all the more impressive given she is around five months pregnant.

Newly-wed Princess Eugenie, in festive red, arrived with husband Jack Brooksbank, the latest addition to the ranks of the royal in-laws. Her sister, Princess Beatrice, walked with Autumn Phillips, wife of the Queen’s eldest grandson, Peter.

Three hours later, the Queen was administering a badly needed dose of equanimity to a fractious nation in her Christmas broadcast. Here was the human embodiment of ‘Keep Calm and Carry On’ doing just that.

Seeking to apply some perspective to our fetid political atmosphere, she focused on the higher, nobler theme of sacrifice. It was striking that the first member of the family whom she singled out in her address should be her father. The Queen quoted the future George VI, writing home after the Battle of Jutland where he served as a young midshipman. 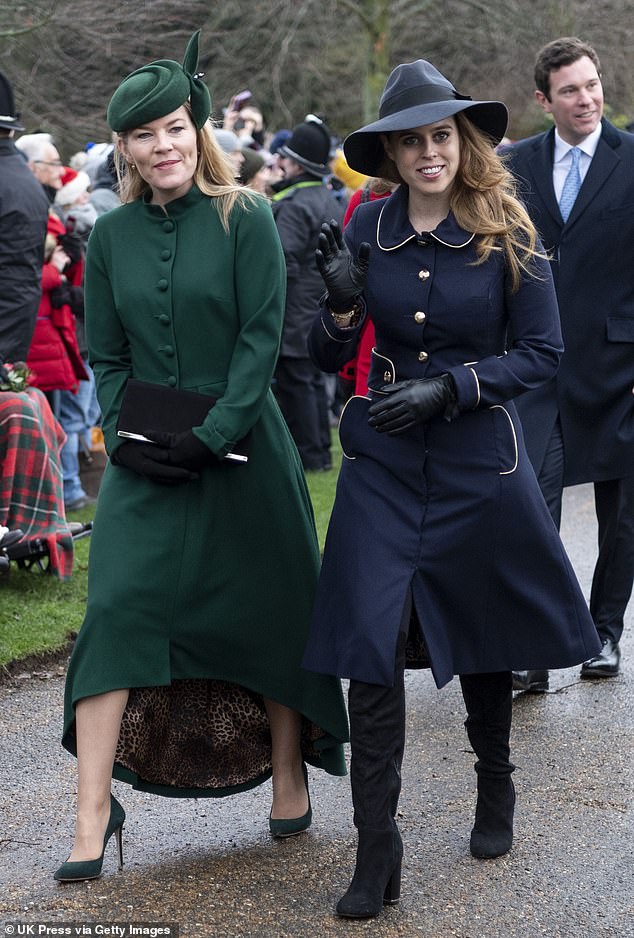 It was this year’s centenaries of the Armistice and of the formation of the Royal Air Force which led yesterday’s broadcast, along with another centenary – the 100th anniversary of the Christmas carol service at King’s College, Cambridge.

This has, of course, been a year of great family milestones for the Queen. Were she writing one of those round-robin letters stuffed inside so many of our Christmas cards, she could have filled up pages with the weddings, the births, the birthdays and all the other landmarks – all of which have underlined the increasingly important role of the monarchy as the strongest glue which binds our cracked society.

Got a point to prove, Mr Markle?

Meghan’s father delivered toys and sweets to refugee children on the US border on Christmas Eve. Thomas Markle, 74, stopped at a hostel and camp for migrants in Tijuana, Mexico.

His visit to families trying to get into the US seemed designed to appeal to the humanitarian side of Meghan. They have not spoken since before her wedding in May.

Only someone as secure and self-assured as the Queen would have been quite as blase about, say, Prince Harry’s wedding to Meghan Markle back in May. Here was a global media event watched by billions, a glorious sun-kissed advertisement for the UK and for the House of Windsor. It was perhaps the last occasion in 2018 when the entire country buried its quarrels for a day. If this had been a politician’s broadcast, it would have been right up at the top of the bill.

Yet it was reduced to a few frames in the Queen’s annual round-up. Ditto the arrival of Prince Louis or the 70th birthday of the Prince of Wales – and there was just a nano-mention of the Duke and Duchess of Sussex’s impending arrival.

The Queen herself has never liked boasting, except when it comes to her Forces, her Church and her Commonwealth. This year, she herself hosted the largest and most harmonious summit in the Commonwealth’s history when the leaders of all 53 member nations – comprising a third of the world’s population – gathered at Buckingham Palace.

All the family rallied round to help the Head of the Commonwealth host her meeting. Though she has never intervened in its internal workings before, the Queen did voice her wish that the Prince of Wales should eventually succeed her as head (the position that is not a hereditary one). 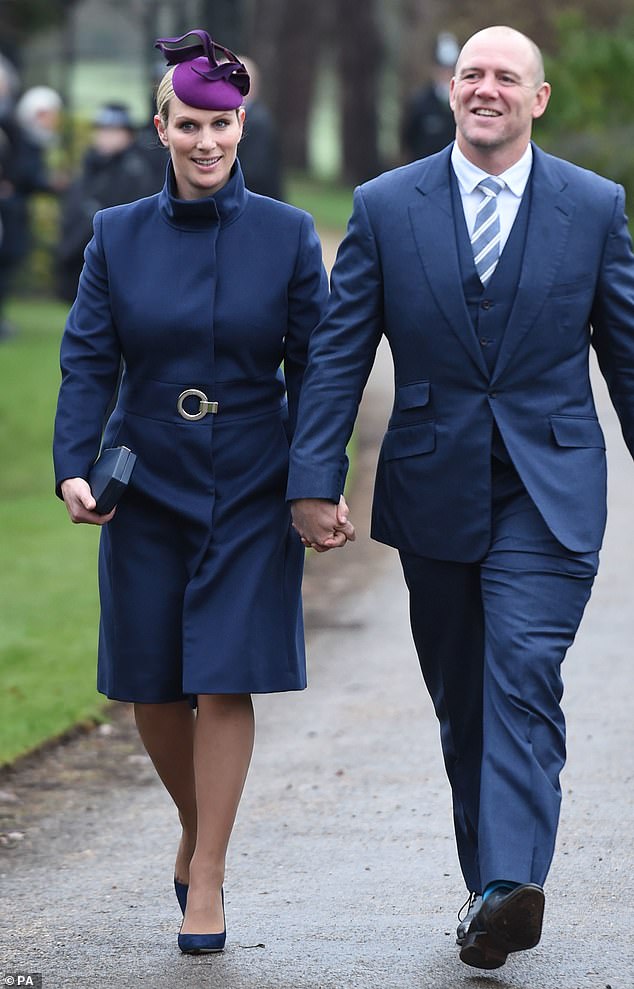 The leaders duly agreed, without a single dissenting voice, to nominate him as her successor. Few can recall the last time that this argumentative outfit was so united on an important issue.

In her tenth decade, the Queen has continued to guide her Prime Minister on a weekly basis, to tour the nation and to ensure fellow heads of state are made to feel welcome.

In the past six months she has not only staged a full state visit for the king and queen of Holland and entertained the entire Diplomatic Corps to dinner – personally shaking hands with almost 1,000 guests – but she has also charmed Donald Trump. His visit to Windsor for tea (and coffee) went on for twice as long as both sides had allotted. 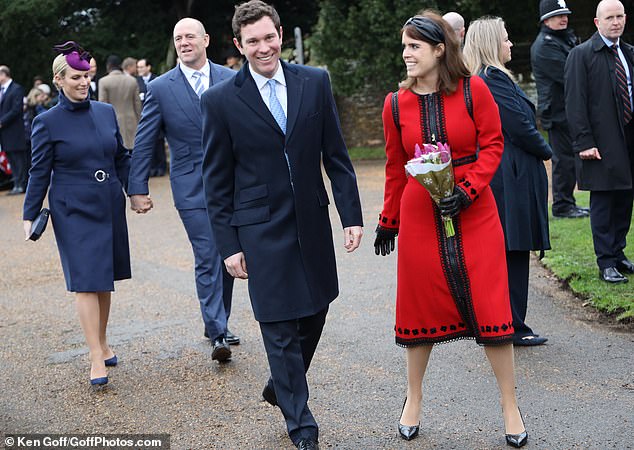 In other words, at a time when royal officials and commentators talk of ‘Team Windsor’ shouldering more of the chores – with the Prince of Wales in the vanguard – the boss is still very much the boss.

Next year, Britain marks the 75th anniversary of D-Day and the 70th birthday of the Queen’s beloved Commonwealth. I think we can already guess some of the scenes in next year’s Christmas broadcast. Just don’t expect to hear the word ‘Brexit’.