ROBERT HARDMAN: Quelle cheek! The pipsqueaks of Luxembourg dare to lecture us on how to behave

The flags are going up in Ettelbruck ahead of this weekend’s commemorations of the day the Allies liberated this market town in central Luxembourg.

There have been similar events across this tiny country in recent days, all of them celebrating the 75th anniversary of freedom after four years of Nazi brutality. While June 1944 kickstarted the liberation of Europe, Luxembourgers celebrate September 1944, the month when a Jeep drove through the ecstatic capital, Luxembourg City, carrying America’s General George Patton alongside a 23-year-old Irish Guards officer.

That young man was Prince Jean, the future Grand Duke of Luxembourg, a British-educated, British-trained, honorary Brit who, for the rest of his life, would never forget the debt which he and his compatriots owed the UK and its Allies.

As far as this gallant chum of the Queen was concerned, the U.S. was not the only country to enjoy a ‘special relationship’ with Britain. Long into old age, he would return to Britain every June to ride behind the Queen at her Birthday Parade, in his capacity as Colonel of her Irish Guards.

So, it is perhaps a blessing that Grand Duke Jean, who died in April aged 98, was not around this week to witness his tiny nation’s posturing pipsqueak of a prime minister, Xavier Bettel, tarnish all those years of friendship with an extraordinary tantrum.

So, it is perhaps a blessing that Grand Duke Jean, who died in April aged 98, was not around this week to witness his tiny nation’s posturing pipsqueak of a prime minister, Xavier Bettel (pictured), tarnish all those years of friendship with an extraordinary tantrum

In what will surely become one of the enduring images of the Brexit saga, Mr Bettel attempted to orchestrate a Press conference with his British counterpart in front of an angry rabble of anti-Brexit protesters in the capital on Monday.

Boris Johnson had come ready to answer questions. However, when the UK’s requests to move the event to a sensible location were rejected, it was clear that this was an ambush. At which point, Mr Johnson refused to participate, yet Mr Bettel pressed on regardless.

Refusing to allow the British podium and flag to be removed, the former talk-show host used them as props for a televised meltdown. Addressing his non-existent guest, he accused Britain of ill-treating EU citizens. ‘Our people need to know what is going to happen to them in six weeks’ time,’ he said. ‘You can’t hold their future hostage for party political gains.’ 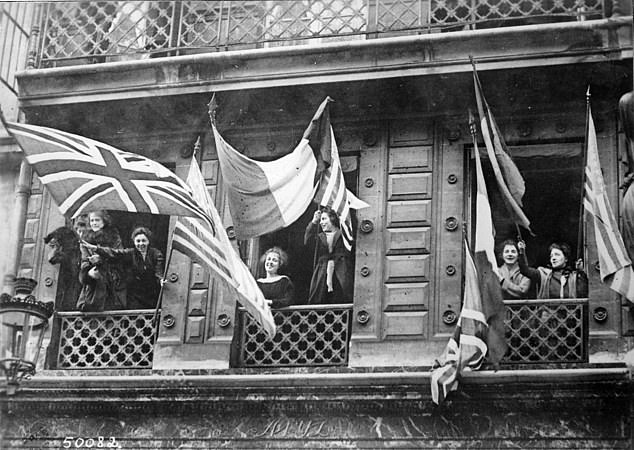 The situation was ‘a nightmare’, he wailed. ‘I repeat: this Brexit — it’s not my choice!’

The Remain camp and Mr Johnson’s usual critics immediately accused the Prime Minister of ‘running away’ and of ‘being humiliated’.

Mr Bettel probably expected the big boys and girls in the EU playground to pat him on the back for his little stunt. Except they have not. His petulance has done them no favours. Yesterday, Norbert Rottgen, chairman of Germany’s foreign affairs committee, warned: ‘Xavier Bettel’s speech did not serve the European cause.’

Privately, Mr Johnson’s staff must be delighted. The British public, regardless of their views on Brexit, never liked seeing Theresa May being mocked by other EU leaders. Whenever she was cold-shouldered at a summit, her ratings would actually go up. I have no doubt most British people will regard Mr Bettel’s conduct as inappropriate, if not obnoxious. No serious Western leader, such as Germany’s Angela Merkel or France’s Emmanuel Macron, would treat a British prime minister like that. 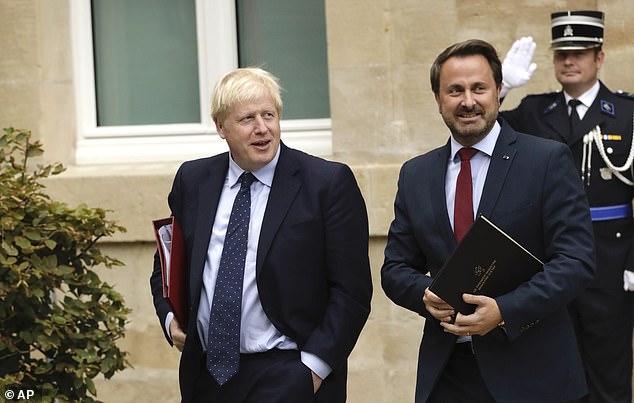 Boris Johnson had come ready to answer questions. However, when the UK’s requests to move the event to a sensible location were rejected, it was clear that this was an ambush

Certainly, no British PM would act that way towards the leader of any nation, be it a superpower or a tiny speck on the map.

All that Mr Bettel has achieved is to invite comparisons between his country and our own. And the more that wavering British voters see of this furtive founding member of the EU, the more they may be inclined to think that leaving is not such a bad idea after all.

Some will be aggrieved that a nation the size of Cheshire, with a third of the population of Manchester, should feel entitled to treat a G7 nation of 66 million with a permanent seat on the UN Security Council as a joke, especially when that nation is an EU partner paying more into the EU pot than anyone else bar Germany.

However, let us not be sidelined by size. All EU nations have an equal say, regardless of their dimensions, That is the way it works. No one should be surprised that the leader of Luxembourg — home nation of the outgoing European Commission president Jean-Claude Juncker — takes an entirely different view on the direction of Europe from that of the UK. 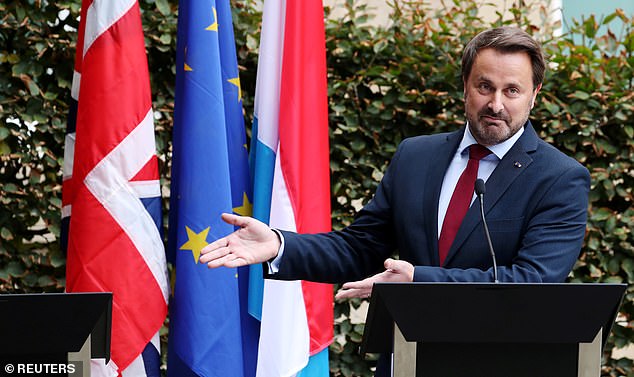 What is so galling is the lack of common decency and the downright hypocrisy.

For, this very month, Luxembourg has been fingered as the world’s Number One tax-dodging destination — by none other than the International Monetary Fund.

A new IMF report shows that the Grand Duchy hosts a mind-boggling £3.2 trillion in foreign direct investment (FDI). That is significantly more than, say, China and equates to a Lottery jackpot of £5 million for every single Luxembourger. What’s more, most of it is what the IMF calls ‘phantom’ investment — money that is simply being slushed between empty corporate shells to avoid tax.

It is only five years since the leak of the so-called ‘Luxembourg files’, a dossier of 28,000 documents showing the way in which more than 300 major corporations were diverting billions away from the taxman in Britain and other countries. And who was in charge of Luxembourg when all this started? Jean-Claude Juncker.

It is all legal, of course. But when you next hear of another local business going under in the face of insuperable online competition, remember the multi-national conglomerate filling that gap via some dark, empty, registered office in Luxembourg. What also sticks in the craw, looking at Mr Bettel mocking the British flag, is either his ignorance of or his wilful disregard for history. 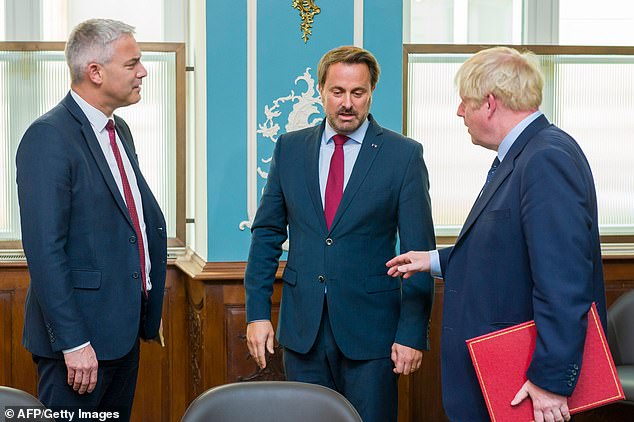 Luxembourg’s independence formally came into existence following the 1839 Treaty of London and was upheld only thanks to the Second Treaty of London of 1867. It was the Allies who liberated Luxembourg in the First World War. During the Second, the country was not just occupied by Germany but fully absorbed into the Third Reich. Luxembourgers were drafted into the German forces while the entire Jewish population were sent to their deaths.

All that remained of independent Luxembourg was its government in exile in London. The future Grand Duke was sent to Ampleforth College, the Roman Catholic public school in Yorkshire, and later to Sandhurst. Commissioned into the Irish Guards, he landed with his regiment in Normandy in June 1944, took part in the brutal battle for Caen, and helped to liberate Brussels three months later.

Within days he had joined General Patton’s U.S. forces to free his homeland, but was soon back with his British unit in Holland to support the disastrous assault on Arnhem. He fought on till the end of the war.

A resurgent Luxembourg was an enthusiastic supporter of British entry into Europe, underlined by the Queen’s state visit to the Grand Duchy in 1976. Described by then PM Gaston Thorn as ‘far and away the most successful visit we have ever had’, it culminated in the Queen’s visit to the tomb of St Willibrord, the English saint who converted Luxembourg to Christianity, and to the country’s largest steel town. There, she heard the (communist) mayor, a survivor of Ravensbruck concentration camp, pay her and the UK an emotional tribute: ‘The voice of London was, for us, the symbol of resistance.’

None of which has any direct bearing, of course, on the events of this week, except that it surely might have merited a modicum of courtesy to the British Prime Minister. Instead, in the very week that Luxembourg marks 75 years of hard-won freedom, thanks in no small part to this country, its so-called leader prefers to treat the UK like an errant child.