ROBERT HARDMAN: Why the next generation must learn about our heroes of the past

Not since 2008 have we seen a veteran of the First World War at the Cenotaph on Remembrance Sunday. Tomorrow, there will be just a handful of those who served in the Second.

And, of course, they will be without the most famous veteran of all, former Subaltern Elizabeth Windsor. And so the baton passes…

There is another familiar face we won’t see tomorrow, either. George Batts had been an 18-year-old sapper on the beaches of Normandy on D-Day in June 1944, crawling around under enemy fire locating landmines in the sand.

He has been one of the main driving forces behind one of the most important monuments this country has erected in recent years, the British Normandy Memorial to the 22,246 British servicemen and women who died liberating France.

The Daily Mail and its generous readers were proud to campaign for this landmark on the spot where British forces came ashore. The veterans were thrilled when it finally opened last year.

We had hoped to see George Batts at this week’s London gathering to hear of a new proposal for this sacred 60-acre site. However, three days earlier, George passed away aged 97.

Not since 2008 have we seen a veteran of the First World War at the Cenotaph on Remembrance Sunday. Tomorrow, there will be just a handful of those who served in the Second. Pictured: Normandy veteran Joe Cattini with his daughter Frances Bradshaw at Westminster Abbey yesterday 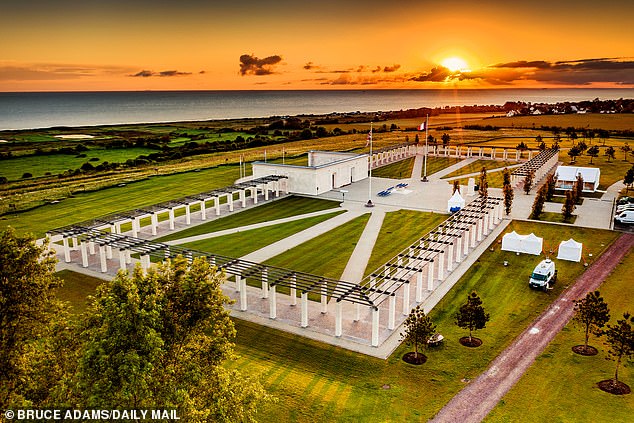 The Daily Mail and its generous readers were proud to campaign for the British Normandy Memorial (pictured) on the spot where British forces came ashore. The veterans were thrilled when it finally opened last year.

It is a great blessing that he had the joy of seeing the finished memorial. As he told me at the time, he could ‘die happy’. However, he and his comrades have unfinished business. Their new dream is for a state of the art education centre alongside the memorial.

‘[There is] a profound purpose to educate successive generations that there must be a better way to solve our differences than through bloody and costly wars,’ explained Lord Dannatt, chairman of the memorial’s trustees.

The importance of this is all too apparent following this week’s alarming survey by the think tank Policy Exchange.

Its data reveals that only 20 per cent of 18 to 24-year-olds now have a positive view of Winston Churchill. Compare that to 20 years ago when the BBC ran a poll to find the greatest Briton ever. Churchill won hands down.

So how have we come to this?

Policy Exchange’s head of education, Iain Mansfield, said that it is, in part, due to the passage of time. But there are more worrying reasons: ‘We are seeing a polarisation of society, a collapse of shared values and shared heroes.’

It is why the think tank now runs its History Matters project, analysing this shift in attitudes. Its chairman, broadcaster Sir Trevor Phillips, has warned of a new zeal ‘to present Britain as uniquely rapacious, violent and prejudiced’. 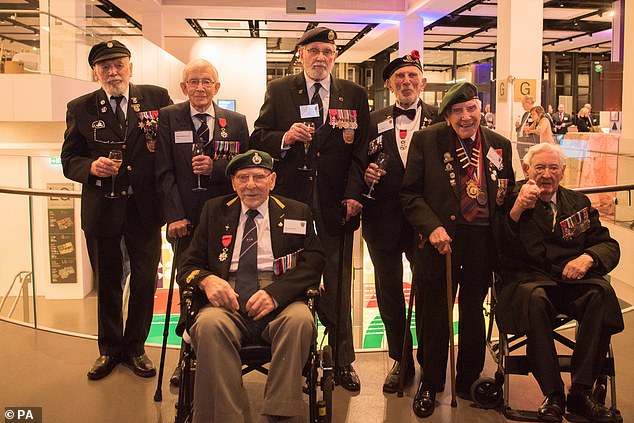 We had hoped to see George Batts (third from left at back) at this week’s London gathering to hear of a new proposal for this sacred 60-acre site. However, three days earlier, George passed away aged 97.

By Richard Marsden For The Daily Mail

Commemorations took place across Britain yesterday on what has become the warmest Armistice Day on record.

Big Ben rang out 11 times to mark the start of the two-minute silence at 11am as veterans gathered at the Cenotaph in Whitehall.

The Duke and Duchess of Gloucester attended a commemoration at the National Memorial Arboretum, in Staffordshire, while services were held at war memorials up and down the country.

Foreign Secretary James Cleverly, who attended a remembrance service held by French president Emmanuel Macron in Paris, said that ‘as we salute our troops’, people should also remember Ukraine’s ‘fight for freedom’.

Among the many veterans marking Armistice Day was Joe Cattini, 99, who visited the 94th Field Of Remembrance at Westminster Abbey. Mr Cattini, who took part in the Normandy landings, is a Normandy Memorial Trust ambassador. Temperatures yesterday broke records for the warmest Armistice Day in England, Scotland and Northern Ireland, and the UK as a whole, although not Wales.

It will be even warmer this weekend, with a high of 20C (68F) possible on Sunday. King Charles and the Queen Consort are due to lead the national Remembrance Sunday events at the Cenotaph tomorrow.

We clearly cannot be complacent. If increasing numbers can no longer appreciate Churchill’s role in saving the free world, how likely is it that they will give two hoots for what happened on the Normandy beaches – or anywhere else? Which is all why the Mail is proud to lend its support to the idea of this new education space alongside the Normandy Memorial.

This week’s gathering in the Cabinet War Rooms heard memorial trustee and BBC journalist Nicholas Witchell outline a vision for ‘a hospitable space where stories are told and lives are remembered.’

He picked out just a handful – Den Brotheridge, the first British soldier to die; Robert ‘Bobby’ Johns, the youngest, aged 16; nurses Dorothy Field and Mollie Evershed, drowned when their hospital ship hit a mine; Indian fighter pilot ‘Tiger’ Thyagarajan in his RAF Typhoon. The aim, Witchell explained, is to build something ‘which speaks to new and younger audiences’. It’s estimated the centre could attract at least 300,000 visitors each year.

Conscious that everyone is feeling the pinch at present, the trustees are not launching a public appeal (though donations are welcome) but, rather, seeking support from educational foundations. For we cannot simply let blinkered wokery sideline the people who made us what we are today.

In that same spirit, another admirable charity is, in its own words, ‘honouring the past to improve our future’. The Remembrance Trust aims to restore memorials and graves which fall outside the remit of the Commonwealth War Graves Commission.

Its team of volunteers have just restored the graves of the last survivors of Waterloo and of Rorke’s Drift. Their next projects include five holders of the Victoria Cross in Portsmouth. However, the trust is not just about great heroes.

Take one of its latest cases, the dilapidated Norfolk grave of Lt-Col Albert Robson, of the Gordon Highlanders, a Boer War veteran.

At the outbreak of the First World War, he rushed to sign up but was rejected. Whereupon, he went home and hanged himself. His suicide note read: ‘I feel I am too old in my seventieth year to do anything for my country, and only make an additional mouth to feed. Therefore, I had better go at once.’

Is he not worth remembering? Does his tale not tell us how our forebears viewed this country and their place in it?

‘You can’t change history,’ said the trust’s Steve Davies, who restored his grave, ‘but you can certainly learn from it’.

Remember that at 11am tomorrow.