Robert Kraft was ‘polite, talked about football and showed officers his Super Bowl ring’ when he was pulled over by police who were investigating the Florida sex spa sting

Robert Kraft was ‘polite’, talked about football and showed off his Super Bowl ring when he was stopped by police soon after he allegedly paid for sexual favors at a Florida massage parlor, according to new court documents.

The interaction police had with the New England Patriots owner back in January was detailed in documents filed by prosecutors on Thursday.

Police said they stopped Kraft after he left the Orchids of Asia Day Spa in Jupiter, Florida on January 19 and got into the passenger seat of a white 2014 Bentley, according to the court papers.

Kraft’s face can be seen in the officer’s body cam footage after the car was pulled over, prosecutors say.

Robert Kraft was ‘polite’, talked about football and showed off his Super Bowl ring when he was stopped by police soon after he allegedly paid for sexual favors at a Florida massage parlor, according to new court documents

The officers said they didn’t know who Kraft was before they stopped him.

‘Robert Kraft was very polite and respectful during the whole process… (he) asked the (officer) if he was a Dolphins fan,’ the prosecutors wrote.

‘He then told the officer he was the owner of the Patriots… and showed his Super Bowl ring.’

Kraft explained to the officer that he was going to Kansas City the following day because the Patriots were playing the Chiefs.

Prosecutors allege that Kraft went back to the spa the following day.

The documents were filed ahead of a hearing on Friday during which Kraft’s attorneys will ask a judge to throw out a video that police say shows the 77-year-old billionaire paying for a sex at the massage parlor.

Prosecutors, however, said Kraft cannot challenge the video’s legality because he could not have had any expectation of privacy in the first place.

‘An individual who is in a business establishment with no ties to that establishment, much less there to engage in a crime, has no expectation of privacy,’ Assistant State’s Attorney Greg Kridos said. 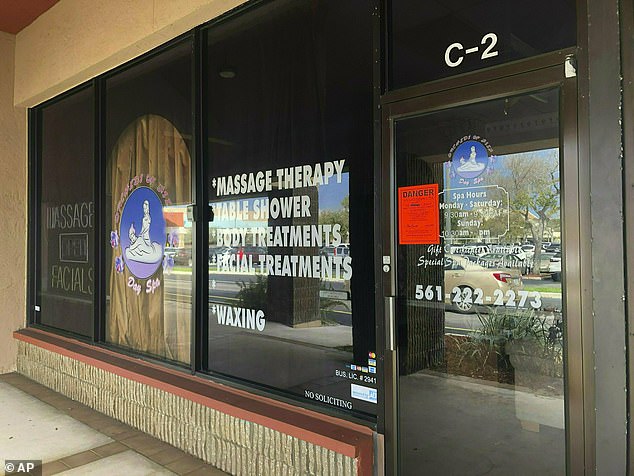 Police said they stopped Kraft after he left the Orchids of Asia Day Spa in Jupiter, Florida (above) and got into the passenger seat of a white 2014 Bentley, according to the court papers

The video could be key evidence against the owner of the reigning Super Bowl champions, who faces two misdemeanor counts of soliciting prostitution at the Orchids of Asia Spa in Jupiter, Florida, along with some two dozen other men.

His legal team is fresh off a win on Tuesday, when they successfully persuaded Hanser to temporarily block prosecutors from releasing the hidden-camera footage to media outlets, which had requested copies under the state’s robust open records law.

Kraft, who has owned the franchise since 1994, pleaded not guilty, but has issued a public apology for his actions.

His attorneys have argued in court papers that the surreptitious videotaping of customers, including Kraft, inside a massage parlor was governmental overreach and the result of an illegally obtained search warrant.

The warrant, Kraft’s lawyers claim, was secured under false pretenses because police officers cited human trafficking as a potential crime in their application. Prosecutors have since acknowledged that the investigation yielded no evidence of trafficking.

Palm Beach County prosecutors in a court filing on Wednesday said Kraft’s motion should be rejected because he could not have expected privacy while visiting a commercial establishment to engage in criminal activity.