Forget history, forget what you think you know,’ growls Taron Egerton’s long voiceover at the beginning of the new Robin Hood film. Which, of course, is just another way of saying this is a Robin Hood like we have never seen before. Or not since Russell Crowe’s so-so 2010 reboot, anyway.

Directed by Otto Bathurst, who honed his craft on TV’s Peaky Blinders, this is a free-wheeling Robin Hood from the Guy Ritchie school of film-making – long on visual effects and ‘geezer’ acting, distinctly short of anything passing for historical accuracy. 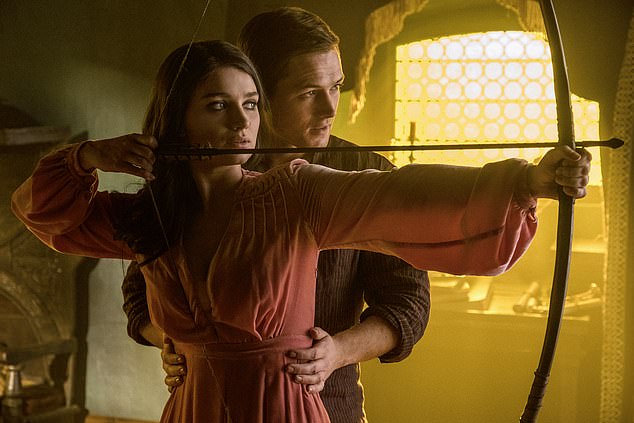 It’s certain to divide audiences. Go hoping for something to stand comparison with Errol Flynn’s 1938 classic, The Adventures Of Robin Hood, and you’ll be disappointed. But accept that this is a commercial popcorn movie aimed at a younger audience and it’s rollicking good fun.

There’s a defining moment when Robin’s late-12th-century getaway wagon races through what is clearly a derelict 20th-century factory, complete with reinforced concrete pillars and steel cross-beams.

You either find yourself crossly adding it to the list of historical inaccuracies that already includes machine-gun crossbows, quilted jackets and industrial-scale steel-making.

Or you find yourself almost cheering and desperately hoping that Rob (sorry, it really is that sort of film), Marian (at least she’s not Maz) and staff-wielding John manage to escape.

To my surprise, I found myself in the latter camp, definitely not something I’d have imagined after an uncomfortable first 20 minutes when Nottingham has never looked less like Nottingham and Merry England more like Merry Somewhere Vaguely Mediterranean.

Set at the time of the Third Crusade, an erratically toned screenplay sees Robin of Loxley, played by the likeable but youthfully blokey Kingsman star Egerton, wrenched away from Loxley Manor and his lovely new wife Marian (Eve Hewson) to fight the Moorish hordes.

There he proves adept with bow and courageous of heart but with a terrible habit of always doing the honourable thing, like leaving no man behind or disapproving strongly of the summary execution of prisoners. 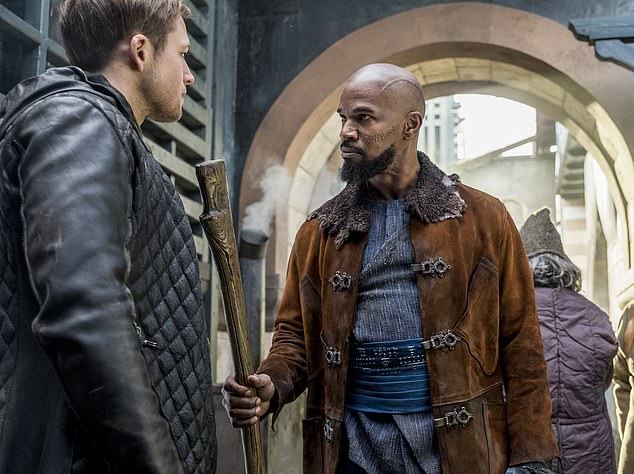 Directed by Otto Bathurst, who honed his craft on TV’s Peaky Blinders, this is a free-wheeling Robin Hood from the Guy Ritchie school of film-making

It’s this last belief that incurs the considerable wrath of his cockney commander, Giz (it takes an hour to discover this is short for Gisbourne), and gets him sent home on a hospital ship.

But it earns him the undying gratitude of a stowaway Islamic warrior (Jamie Foxx) with an unpronounceable name whom he decides to call John. Ah, now we see where we are heading.

But after two years away, much has changed. Robin’s been declared dead and, in his absence, Marian is now living with a civil-rights activist called Will (Jamie Dornan).

Meanwhile, Nottingham is being taxed until its pips squeak by its war-mongering Sheriff (Ben Mendelsohn) and Tim Minchin is overdoing the comic- hamming as Friar Tuck. Yes, the gang’s all here and the robbing of the rich to give to the poor (Marian’s idea, it turns out) is surely about to begin. 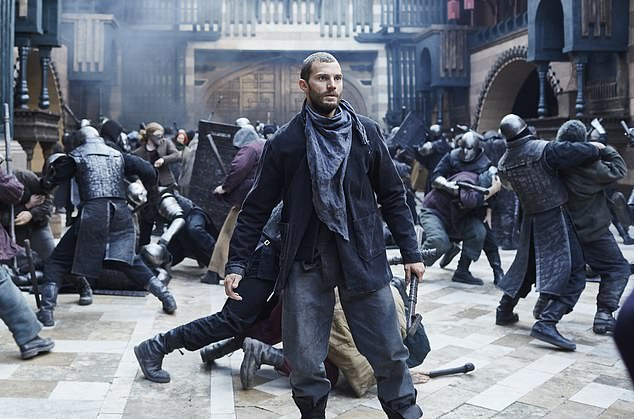 After two years away, much has changed. Robin’s been declared dead and, in his absence, Marian is now living with a civil-rights activist called Will (Jamie Dornan, above)

Mendelsohn’s presence as a properly evil Sheriff of Nottingham is vital, adding a touch of class and menace. Dornan and F Murray Abraham as a scheming Cardinal help by taking things seriously too – suddenly we have a film that has at least a hint of depth to balance the occasionally misfiring humour and undeniable visual fun.

I ended up really enjoying it – more so than Ritchie’s King Arthur: Legend Of The Sword – and looking forward to the sequel we are clearly being prepared for. Sherwood Forest and all.

Claire Foy swaps the twin-sets, pearls and occasional tiara that made her so good as the Queen in The Crown for… er, the functional black underwear, mop-crop hair and motorcycle leathers of Lisbeth Salander in The Girl In The Spider’s Web.

And a perfectly decent job she does, too, in the first film to feature Salander since all three of the Millennium novels written by the late Stieg Larsson were successfully turned into films and both Noomi Rapace and Rooney Mara retired from the demanding role.

Think Salem and most people think of witches, which presumably is why writer-director Sam Levinson based Assassination Nation there, as a thoroughly 21st-century witch-hunt gets under way.

Someone is hacking into computers and releasing the social-media postings and internet-browsing history of a succession of individuals, beginning with the mayor, then the high-school head, then the police chief… But who is the elusive hacker? 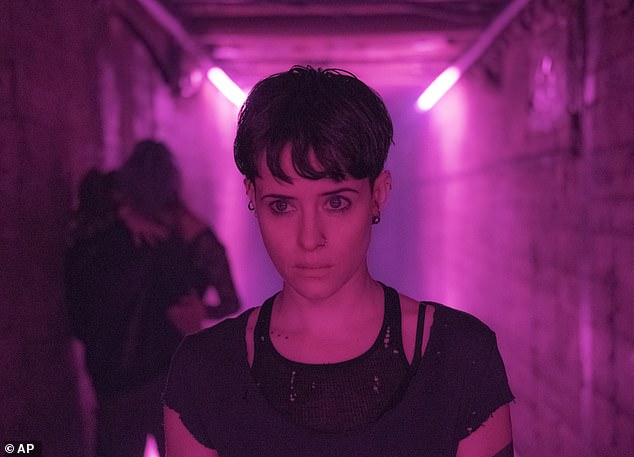 Claire Foy swaps donning pearls as the Queen in The Crown for… er, the mop-crop hair and motorcycle leathers of Lisbeth Salander in The Girl In The Spider’s Web

It’s a clever idea but its stylish and wickedly enjoyable execution is even better, with the drama playing out through the initially complacent eyes of four 18-year-old friends – three girls and their trans-bestie, Bex.

But they don’t stay complacent for long in a notably full-on film that I should warn you is as potentially offensive as it is alarming.

Until I saw Back To Berlin I’d never heard of the Maccabiah Games, which sprang from a 19th-century movement to promote Jewish athleticism and which, in the Thirties, saw motorcycle riders setting out from Palestine to encourage Jews from all over the world to participate.

But Hitler’s Olympic Games of 1936 in Berlin were just around the corner.

Now, 80 years later, Catherine Lurie’s cameras follow 11 motorcyclists – two Holocaust survivors among them – as they set off to ride across Europe to Berlin, where the latest Maccabiah Games are being held. With stops at Auschwitz-Birkenau and Treblinka along the way, the stories told are powerful, horrific and cautionary.

Nativity Rocks! is the fourth instalment in Debbie Isitt’s interminable Christmas franchise. Coventry wants to put on a rock musical to win Christmas Town of the Year. Craig Revel Horwood plays an impresario who wants to make it all about Herod, which is tasteless but quite funny.