Robot dogs join the US Space Force: Ghost Robotics’ $150,000 four-legged bots are being used to patrol the Cape Canaveral station

‘Robot dogs’ are being tested by the US Space Force so they can carry out patrols of the Cape Canaveral Space Force Station.

The $150,000 (£123,000) four-legged bots can be equipped with a wide variety of optical and acoustic sensors, allowing them to serve as the ‘eyes and ears’ around sensitive areas of the base.

They are being used for patrols ‘to save significant man hours’, according to a statement from the Department of Defense.

Built by Ghost Robotics, the robots can be operated either autonomously or by a human controller.

Don’t mess: ‘Robot dogs’ (pictured) are being tested by the US Space Force so they can carry out patrols of the Cape Canaveral Space Force Station 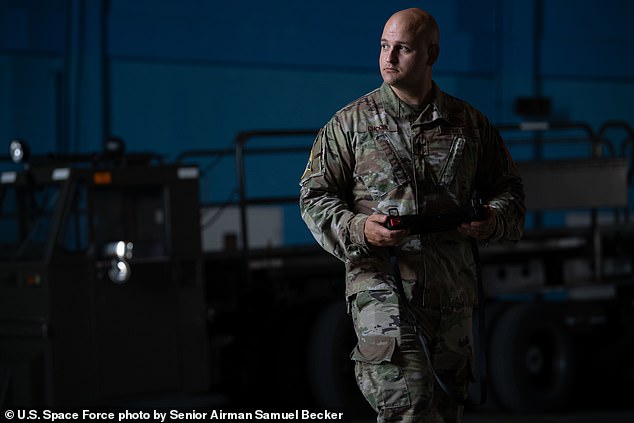 Built by Ghost Robotics, the robots can be operated either autonomously or by a human controller

They can also carry antennas, allowing them to quickly extend networks beyond existing infrastructure or in locations where no such infrastructure exists.

The dog-like robots have previously been tested by the US Air Force for perimeter defense tasks.

Aside from their military use, the hope is that the machines could potentially be of use during emergency situations and inspections at industrial sites.

On its website, Philadelphia-based Ghost Robotics says: ‘Our goal is to make our Q-UGVs an indispensable tool and continuously push the limits to improve its ability to walk, run, crawl, climb and eventually swim in complex environments that our customers must operate in, day in and day out.

‘Ultimately, our robot is made to keep our warfighters, workers and K9s out of harm’s way.’

At the US Army trade show last October, one of the robot dogs was armed with a 6.5 mm Creedmoor sniper rifle capable of precisely hitting targets from 3,940 feet away. 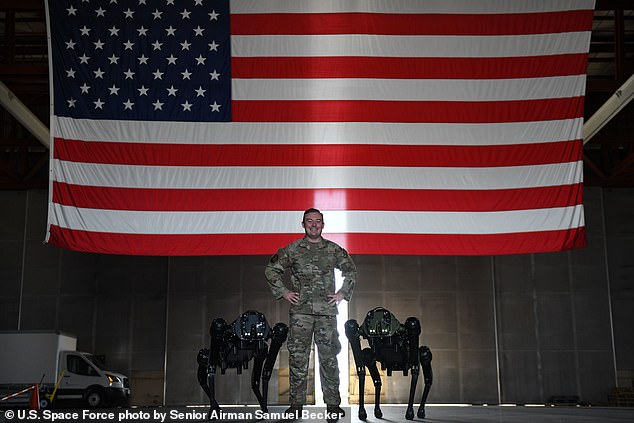 They are being used for patrols ‘to save significant man hours’, according to a statement from the Department of Defense 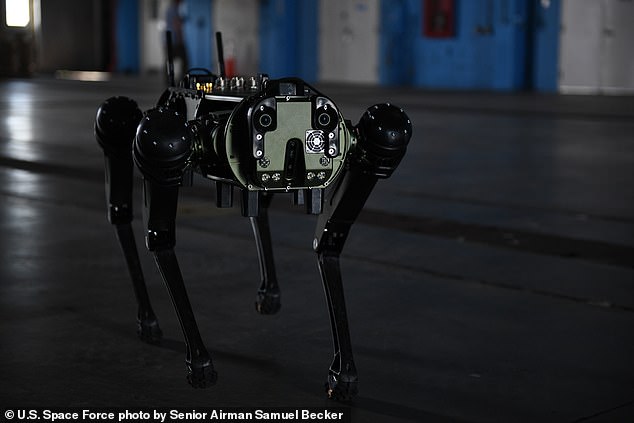 The $150,000 (£123,000) four-legged bots can be equipped with a wide variety of optical and acoustic sensors, enabling them to serve as the ‘eyes and ears’ around sensitive areas of the base

Placed on top of one of Ghost Robotics’ existing ‘quadrupedal unmanned ground vehicle’ designs, the ‘Special Purpose Unmanned Rifle’ was designed to be remotely instructed to load, unload and fire its rifle.

However, no details were revealed about the exact configuration of the weapon, nor how much ammunition the machine is capable of carrying or its reload rate.

The US Air Force has reportedly expressed an interest in the possibility of operating robot dogs remotely from central command facilities by means of interfaces similar in design to commercial virtual reality headsets.

Officers are looking to use the machines for perimeter security, scouting and urban warfare operations — as well as opening up access to spaces that might be too small, tight or dangerous for a human soldier to safely navigate into.

‘These dogs will be an extra set of eyes and ears while computing large amounts of data at strategic locations throughout Tyndall Air Force Base,’ Air Force Major Jordan Criss said after a 2020 test involving the robots.

He added: ‘They will be a huge enhancement for our defenders and allow flexibility in the posting and response of our personnel.’