Robot mine-hunters will replace Royal Navy sailors to detect and destroy suspect devices at sea in an £184million programme with France.

He said the systems will ‘protect vital shipping lanes, commercial traffic and brave personnel’ from the devices.

The boats will be controlled from a ‘mothership’ while a towed sonar locates any weapons. A mine neutralisation system, which is an underwater vehicle operated remotely, is then used to stop a weapon from exploding once it has been located.

Robot mine-hunters will replace sailors to detect and destroy suspect devices at sea (pictured: an autonomous minehunter procured by Defence Equipment and Support for the Navy) 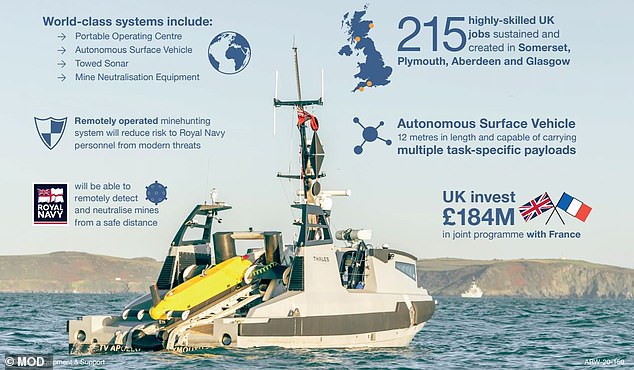 The programme will prop up 215 UK jobs, including at Thales bases in Plymouth and Somerset, L3 Harris in Portsmouth, Alba Ultrasound in Glasgow and Stonehaven in Aberdeenshire

Speaking at the conference, Mr Wallace said: ‘This £184million contract offers a huge leap forward for the Royal Navy’s autonomous capabilities in the detection and defeat of sea mines.

‘As the Armed Forces puts modernisation at the heart of its future strategy, these systems will protect vital shipping lanes, commercial traffic and our brave personnel from these deadly devices.

‘The programme also underpins a deep and ever-strengthening relationship with France and marks the tenth anniversary of the Lancaster House treaties between our two nations.’

A spokesman for Thales, which provides services for the defence sector, told The Telegraph that trials have taken place to enable vessels to work together as a ‘swarm’.

First Sea Lord Admiral Tony Radakin commented: ‘I am enormously excited by the potential of the future minehunting capability.

‘This will allow us to deliver minehunting more effectively, more efficiently and more safely, and to integrate even more closely with our French counterparts in this important area.’ 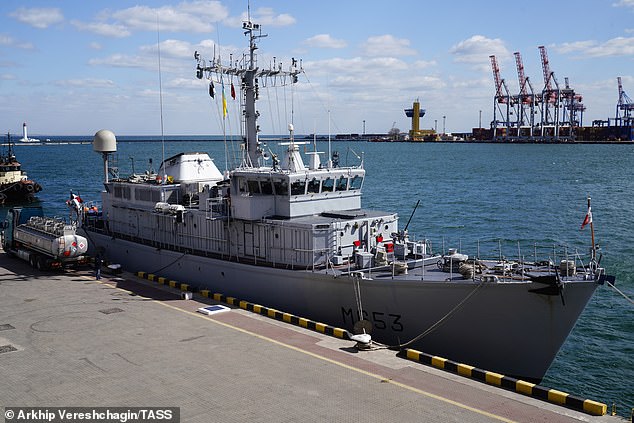 The programme will prop up 215 jobs in the UK at Thales bases in Plymouth and Somerset, alongside L3 Harris in Portsmouth, Alba Ultrasound in Glasgow and Stonehaven in Aberdeenshire, according to the government.

Sir Simon Bollom, CEO of Defence Equipment and Support (DE&S), which negotiated the UK part of the programme, said: ‘This ground-breaking technology brings with it a step-change in capability for the Royal Navy which is a bold step into the digital and autonomous world.

‘I’m incredibly proud of DE&S and the Royal Navy team who have worked tirelessly with our French colleagues to deliver on this contract.’

The first batch of equipment is set to be delivered in late 2022.

Alex Cresswell, CEO of Thales in the UK, added: ‘Technologies such as autonomy and AI are transforming societies and warfare at an exponential rate.

‘This contract represents the next generation for Anglo-French minehunting, delivering a world leading capability that will keep our armed forces safe and create and secure vital jobs across the UK and our supply chain.

‘We look forward to delivering the next stage in this exciting hi-tech programme.’