The rock hyrax, found across Africa and the Middle East, is one of the few mammals known to sing.

The song of the small furry animal, which is closely related to the elephant, is punctuated with snorts that indicate its emotional state.

Researchers say the harshness of the snort is ‘linked to both the singer’s social status and testosterone levels, possibly reflecting inner arousal.’

More snorts mean more excitement or aggression but it’s also a way to keep an audience’s attention, according to a new study.

The song of the rock hyrax, a small furry animal that’s actually closely related to the elephant, is punctuated with snorts that increase in number and harshness as the song continues. Researchers believe the snorts advertise the male’s virility and ensure his audience doesn’t tune him out

The rock hyrax, also known as a rock rabbit and a dassie, live in communities of more than 50 individuals.

These tusked critters, which spend most of their time sleeping, weigh under 10 pounds and only grow to about 20 inches.

But while they look like guinea pigs on steroids, they’re actually closely related to the elephant.

Along with elephants, the hyrax and manatee all derive from the same ancestral group of mammals called tethytheria, which lived some 50 million years ago.

‘The hyraxes are a mammal that has a rare phenomenon, which is singing,’ Yishai A. Weissman, an animal behaviorist at Hebrew University in Jerusalem, told Scientific American. 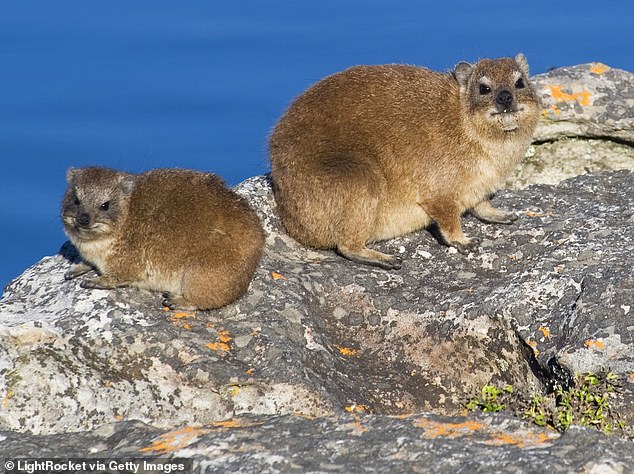 Hyraxes, which spend most of their time sleeping, weigh under 10 pounds and only grow to about 20 inches. But they generate more than 20 different sounds, including grunts, wails, shrieks, trills, snorts and whistles

‘We know a lot of birds sing, but we don’t have many mammals that actually perform a song, a complex song with different syllables coming in bouts.’

These songs are a risky gambit – taking time and energy and exposing their location to birds of prey and other predators.

Weissman believes the songs are the hyrax’s way of showing off their ‘male quality,’ their suitability as a mate and ability to fight off other suitors.

There is one male for every five to seven females in a colony, according to the San Diego Zoo, and he patrols his territory very carefully.

The males’ calls are long and complicated – the hyrax generates more than 20 different sounds, including grunts, wails, shrieks, trills and whistles.

His team recorded male hyrax songs in Israel during mating season to analyze their tone and frequency.

‘The whole song seems to be an introduction for these snorts,’ he said.

The snorts increase as the song continues, resulting in a ‘snort crescendo,’ that reflects the male’s state of mind.

‘As they become more excited or more aggressive, their songs become, well, snortier,’ he said.

And those snorts, according to his findings in the journal Animal Behaviour, become louder and more abrasive.

Weissman believes that’s so that other hyraxes can’t ignore his crooning.

‘It might be that these snorts are what’s keeping the listeners listening,’ he said. ‘A lot of times, the hyrax is just busy eating leaves, and they don’t even turn their heads to someone that’s singing.’

‘The snorts might be what serves as an attention grabber,’ he adds. ‘And getting harsher and harsher might keep the listeners from droning off.’

Understanding these creatures’ eerie calls might tell us something about our own appreciation of music, too.

‘Understanding the development and progression of challenging elements within animal communication systems may reveal a key fundamental root of modern musical structure, and shed light on the evolutionary basis of musical perception.’