Rocket dog! Moment owner takes his Golden Retriever on a joyride in a Flyboard

Miami boaters spotted a dog owner taking his Golden Retriever out for a joyride on a Flyboard above the water last week.

Carly Payne filmed the video that shows the man, wearing pink shorts and a cap, holding his dog’s front two paws while it stood between his legs on the device.

In the video, a group of onlookers on a yacht nearby can be seen observing the dog owner and his pet in awe among a crowded area of boats.

Payne told Storyful that after the dog’s joyride, it stayed on her boat for 30 minutes while the owner continued to fly around with the Flyboard.

The device is worn by users by strapping their feet into the shoes that are then attached to powerful water jets, providing lift, with hand-guide nozzles stabilizing the flight.

The power of the water is controlled by an operator on the jetski, which has to have at least 100-horsepower to operate the Flyboard.

Once the person has got the hang of it, it’s possible to jump to incredible heights out of the water – over 72ft – with the device’s inventor Franky Zapata himself even able to perform backwards somersaults.

Boaters spotted a golden retriever appearing to fly above the water with the help of a Flyboard along with its owner in Miami, Florida, last week 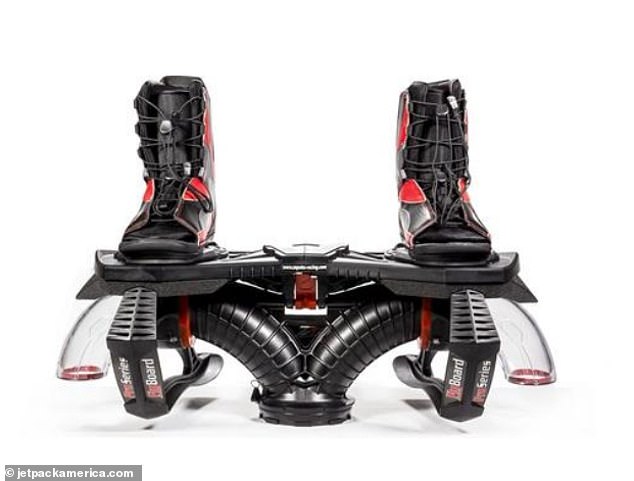 Flyboards are hydrolifting devices which use propulsion to fly into the air. Users stand on the board, connected by a long hose to a watercraft, most commonly a jet ski. Water is then forced under pressure to a pair of boots with jet nozzles underneath

Celebrities including Leonardo DiCaprio, Kylie Jenner, her sister Kendall, Lewis Hamilton and Michelle Rodriguez have all been previously spotted flyboarding. The devices are increasing in popularity for recreational purposes in California, Florida and Mexico.

However, the devices have caused a major backlash from nature preservationists in the past.

Fisherman, scientists and state officials in Hawaii question the safety of the Flyboard, and are concerned about how they may affect fish and coral in the state’s heavily trafficked tropical waters.

Complaints from Hawaiian fishermen and other ocean enthusiasts prompted the state Department of Land and Natural Resources to call a public meeting about the devices in 2013. 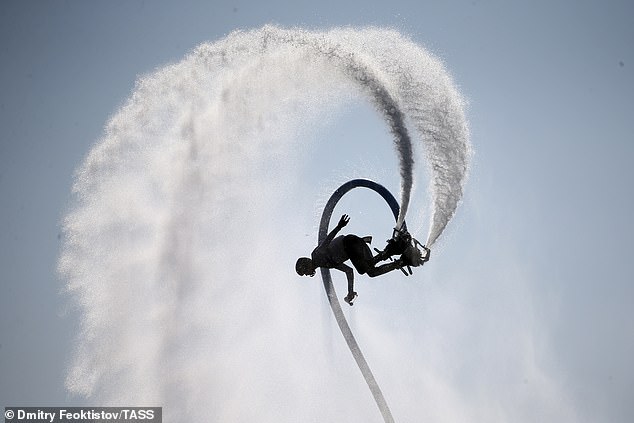 The gadget, seen here being used in Russia, is hooked up to a hose and the user is able to go up in the air as water shoots out of the bottom, pushing them up to 72 feet in the air 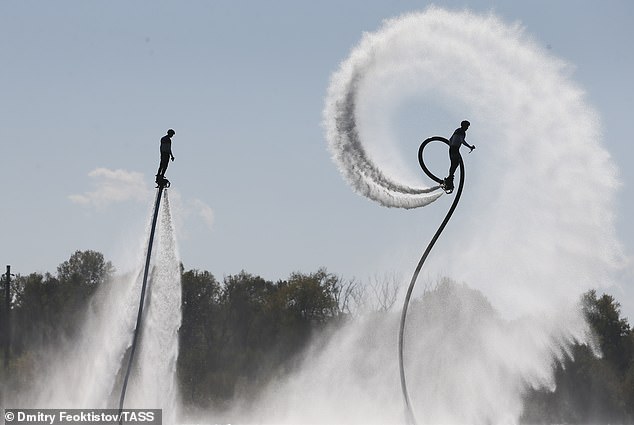 The revolutionary devices are increasingly popular, and have been rented in Hawaii, Florida and California in the U.S. 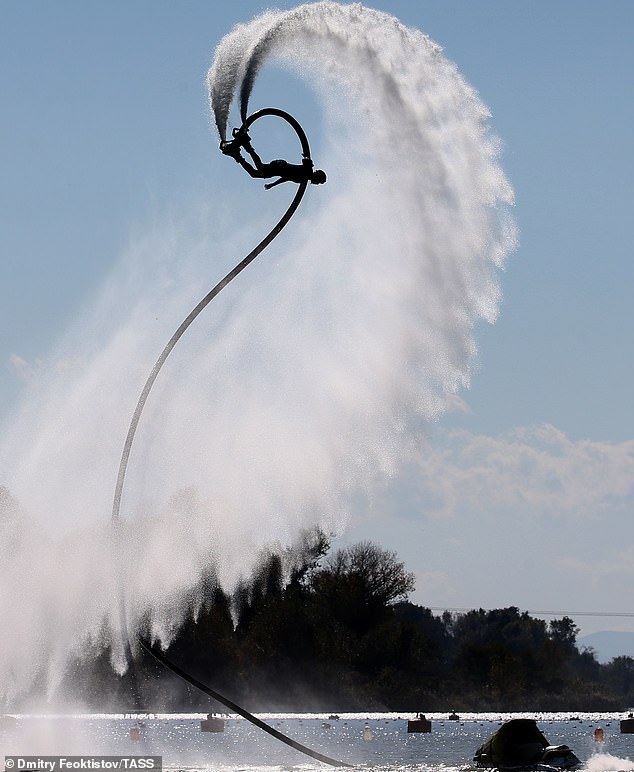 High concern: Now environmentalists are worried that the streams of water pressure are going to do damage to the wildlife and coral reefs below the waves

The department’s top enforcement officer, Randy Awo, expressed alarm about unsafe maneuvers, such as riders dive-bombing into the water next to moving boats.

University of Hawaii coral scientist Bob Richmond told officials he was concerned about the noise the devices make, as fish avoid areas that are too loud.

He was also worried that fish and coral larvae could get pumped through some of the equipment the watercraft use and die.

Nine years ago, fisherman Carl Jellings said watercraft already scare fish away from Oahu’s bays, and he worries these new machines will just add to the problem.

‘More and more and more these bays are being run over, taken over by other activities. The marine life that depend on these places – they’re being displaced,’ he said in an interview. 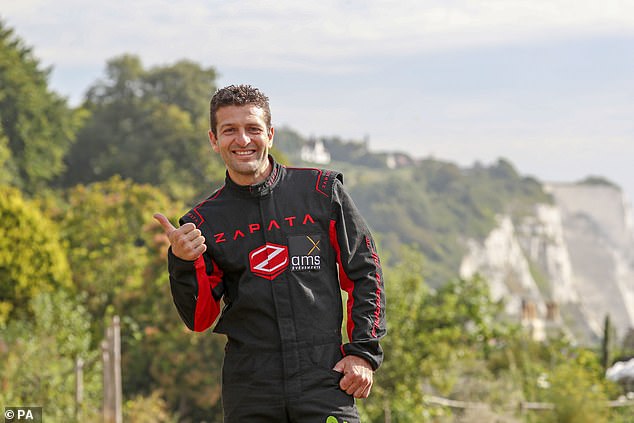 French inventor Franky Zapata came up with the flyboard in autumn 2012, less than a year before environmental conservationists raised concerns 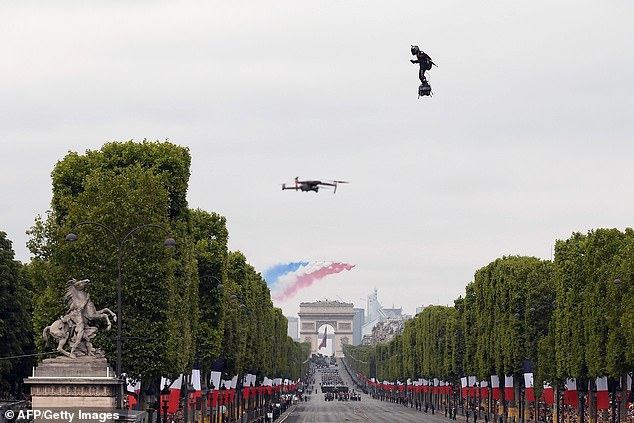 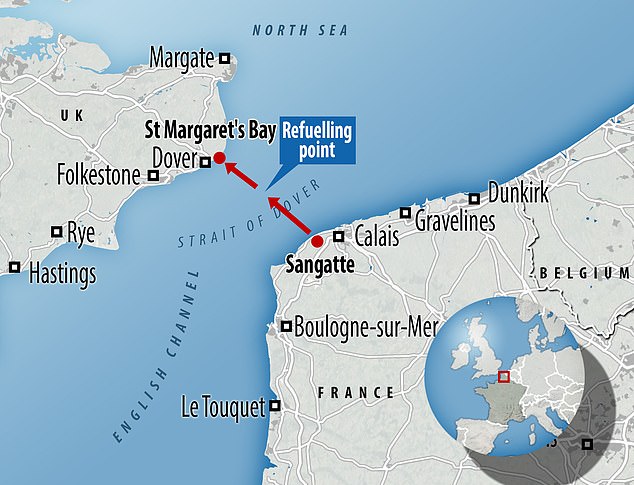 In the summer of 2019, Zapata managed to complete a 20-minute journey, crossing the English Channel on a Flyboard air, reaching a speed of 180 km/h (110 mph) and reaching an altitude of approximately 15 meters (49 feet)

Meanwhile, Zapata also invented the Flyboard Air – the hoverboard that can start on its own and that is powered by five turbines and fueled by kerosene. The Frenchman showed off his new invention for the first time at the 2019 Bastille Day military celebrations in Paris. One month later, in August, Zapata successfully flew over the English Channel on the device after a failed attempt on 25 July.

During his 22-mile (35-kilometres) journey, Zapata was carrying a backpack fuel reservoir as he couldn’t achieve the trip without needing to refuel. He completed the journey in about 20 minutes and reached a speed of 180 km/h (110 mph) and held an altitude of approximately 15 meters (49 feet).

The flyboard, though, is not eligible for military use due to the noise it makes and the challenge of driving the device. The devices can costs anywhere in between $,4,000 and $6,000 for a complete kit.