DENVER (AP) – The Colorado Rockies sprayed soda around the clubhouse and even did a bit of dancing after clinching their first postseason berth since 2009.

Then, they had to go play a game – pressure free, of course.

Colorado sewed up the second NL wild-card spot courtesy of St. Louis’ 7-6 win over Milwaukee on Saturday afternoon. Former Rockies pitcher Juan Nicasio recorded the final out for the Cardinals.

Colorado Rockies right fielder Carlos Gonzalez, right, sings for first baseman Mark Reynolds as they work out around the cage as the team takes batting practice before facing the Los Angeles Dodgers in a baseball game Saturday, Sept. 30, 2017, in Denver. (AP Photo/David Zalubowski)

The Rockies will face Arizona in the NL wild-card game Wednesday night.

Colorado fans trickling into Coors Field before the game against Los Angeles let out a roar after St. Louis won. The Cardinals-Brewers game was shown on the scoreboard.

In the clubhouse, the Rockies wildly celebrated after gathering in front of a TV. Ian Desmond showered his teammates with soda, Jonathan Lucroy raised his hands in triumph, Nolan Arenado let out a scream and Carlos Gonzalez broke into a dance.

The team received an ovation from the crowd as it took the field. Colorado pushed back the first pitch by 21 minutes, calling it a weather delay, although no rain fell and the tarp wasn’t unrolled.

The Rockies then lost 5-3 to the Dodgers, with Los Angeles (103-58) ensuring itself home-field advantage throughout the postseason and the best record in the majors.

In an interview before the game, Gonzalez simply said to the fans: “This feels really good. Excited for what’s next. Thanks!”

Gonzalez is the only player remaining from the ’09 squad that lost to Philadelphia in an NL Division Series.

“Eight years later, that’s crazy,” Gonzalez said. “It shows you it doesn’t matter all the talent you have, it’s all about being on the same page. Everybody has been pulling for each other since Day One.

“We believed we were a really good team. Sometimes, it’s just that simple for some players. You know, ‘Hey, you’re good. You can beat anybody.'”

The winner of the wild-card game in Arizona will meet Los Angeles in Game 1 of an NLDS on Friday at Dodger Stadium.

This is a team that finished 75-87 last season, parted ways with manager Walt Weiss and brought in Bud Black. Their big offseason acquisitions were Desmond and closer Greg Holland. 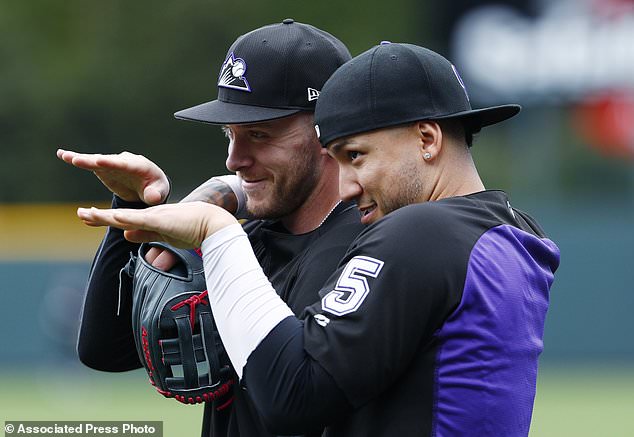 Colorado Rockies shortstop Trevor Story, back, and right fielder Carlos Gonzalez joke around with third baseman Nolan Arenado as he takes his turn as the team takes batting practice before facing the Los Angeles Dodgers in a baseball game Saturday, Sept. 30, 2017, in Denver. (AP Photo/David Zalubowski) 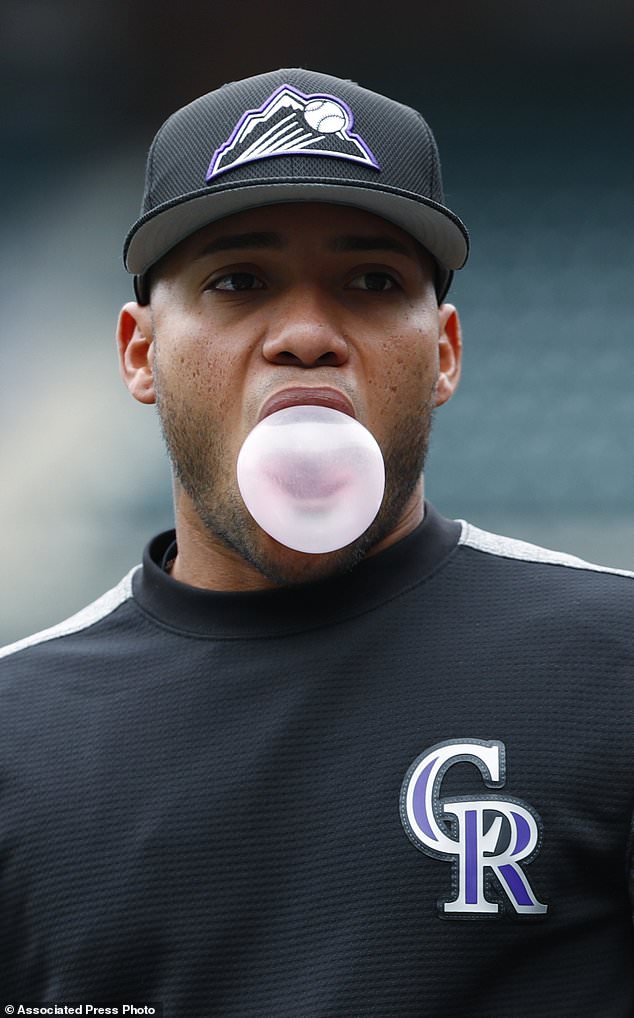 Colorado Rockies shortstop Alexi Amarista blows a bubble with his gum around the cage as the team takes batting practice before facing the Los Angeles Dodgers in a baseball game Saturday, Sept. 30, 2017, in Denver. (AP Photo/David Zalubowski)