Free agent quarterback Colin Kaepernick is being blackballed by NFL teams because of his anthem protest and not for any supposed lack of ability, Green Bay Packers quarterback Aaron Rodgers told ESPN.

‘I think he should be on a roster right now,’ Rodgers said. ‘I think because of his protests, he’s not.’

Kaepernick sparked outrage during his final season with the San Francisco 49ers last year when the former starter began taking a knee during the playing of the national anthem as a way to protest police violence against minorities.

Colin Kaepernick speaks with Aaron Rodgers after a game in 2015 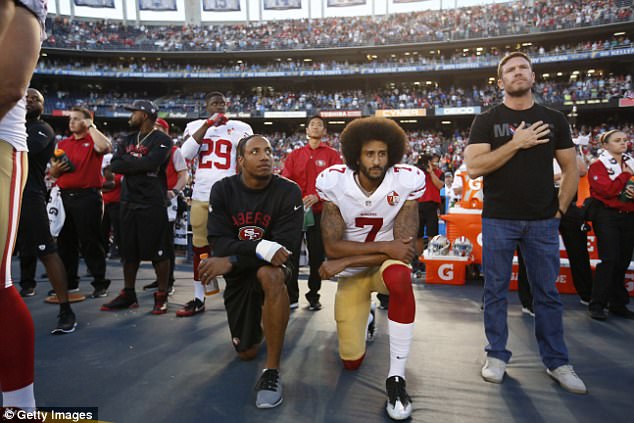 Colin Kaepernack became the first NFL player to protest police violence by kneeling during the anthem, but he has been joined by numerous teammates and other NFL players

The 29-year-old actually sparked a trend throughout the NFL, which has had an uneasy relationship with players exercising their first amendment right during ‘The Star Spangled Banner.’ Giants co-owner John Mara previously said that he had received extensive feedback from fans who objected to players taking a knee.

‘All my years being in the league,’ Mara told MMQB, ‘I never received more emotional mail from people than I did about that issue.’

Rodgers, who will continue to stand for the anthem, defended players who choose to protest by kneeling.

‘I’m gonna stand because that’s the way I feel about the flag – but I’m also 100 per cent supportive of my teammates or any fellow players who are choosing not to,’ Rodgers told ESPN. ‘They have a battle for racial equality. That’s what they’re trying to get a conversation started around.’

Kaepernick has had an up-and-down career as an NFL starter, but his statistics are comparable and even superior to some current highly-paid quarterbacks. Not only did the former Nevada Wolfpack star lead the 49ers to three conference championships, but he even helped San Francisco to Super Bowl XLVII, where the 49ers lost to the Baltimore Ravens.

In 2012, he led the NFL with 8.6 yards per passing attempt, and while Kaepernick’s career record as a starter is just 28-30, he has tossed for 72 career touchdowns and just 30 interceptions.

For comparison’s sake, the Miami Dolphins recently gave a one-year, $10 million contract to previously retired quarterback Jay Cutler, who twice led the NFL in interceptions and has a 68-71 record as an NFL starter. 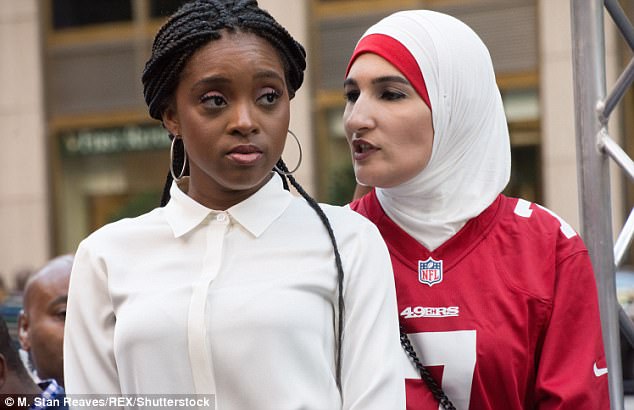