Vogue readers all know that Anna Wintour is a big tennis fan, but many might be surprised to know that one of her favorite players, Roger Federer, is a fan of hers as well.

In fact, the 37-year-old athlete revealed at a press gathering this week that he has turned to the 68-year-old for style tips on a number of occasions, and will even run his US Open outfits by her in advance.

Expert tips: Roger Federer revealed that he has turned to the Anna Wintour for style tips on a number of occasions 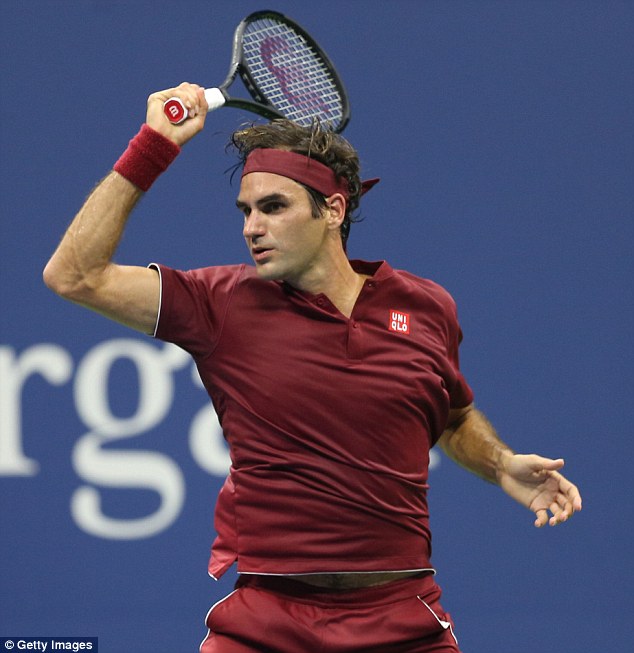 What does she think? Federer, 37, recently signed a sponsorship deal with UNIQLO and says he consulted 68-year-old Wintour first

‘Sometimes she likes to know what I’m going to wear. She asked me what I was wearing to the US Open and I would show her and she has her comments and sometimes when I have choices, I’ll show her,’ he went on.

Federer recently ended his 20-year deal with Nike and signed a new one with UNIQLO — a decision he discussed with Wintour first.

‘She’s very trustworthy so I feel like it’s only for the best that I bring cool stuff to tennis. Anna is incredibly supportive and I can’t thank her enough,’ he said.

The star, who won his 20th Grand Slam title this year, went on to share some his own fashion leanings, saying he likes to start with fabric and color. 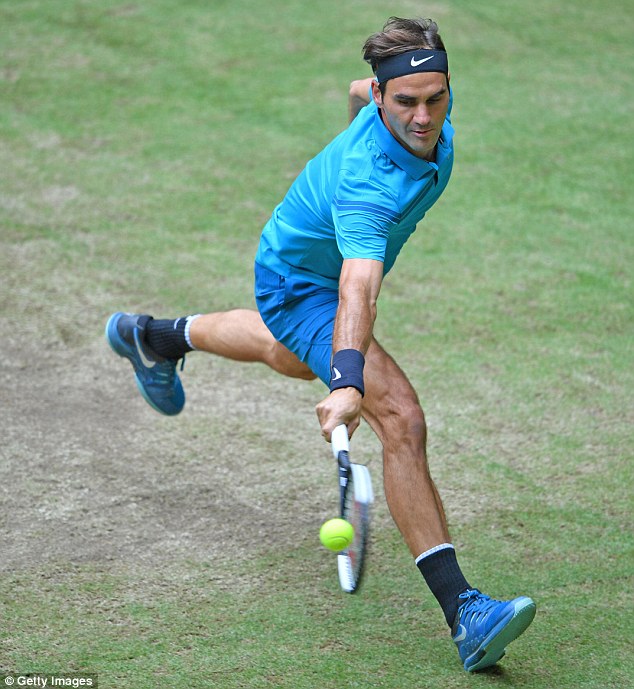 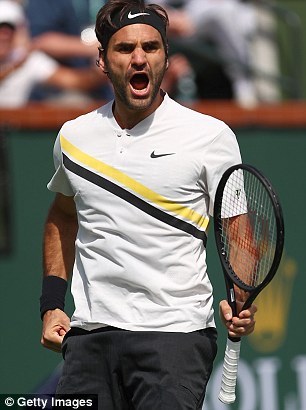 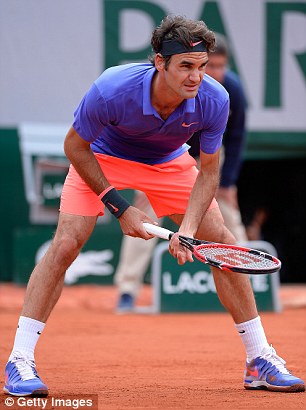 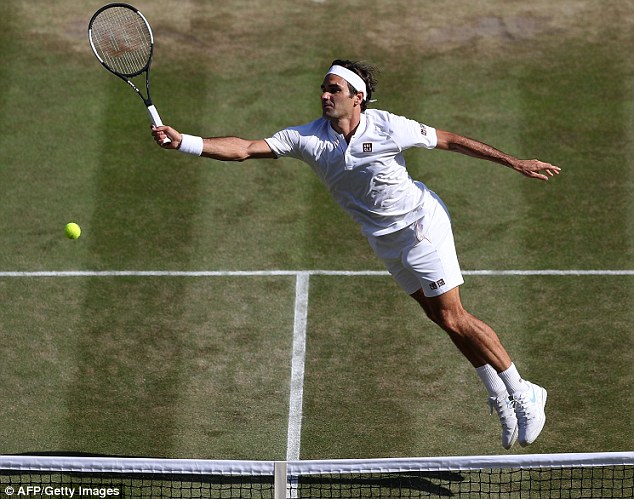 Love: Federer (pictured at Wimbledon on July 11, 2018) said he will run outfits by the editor before matches 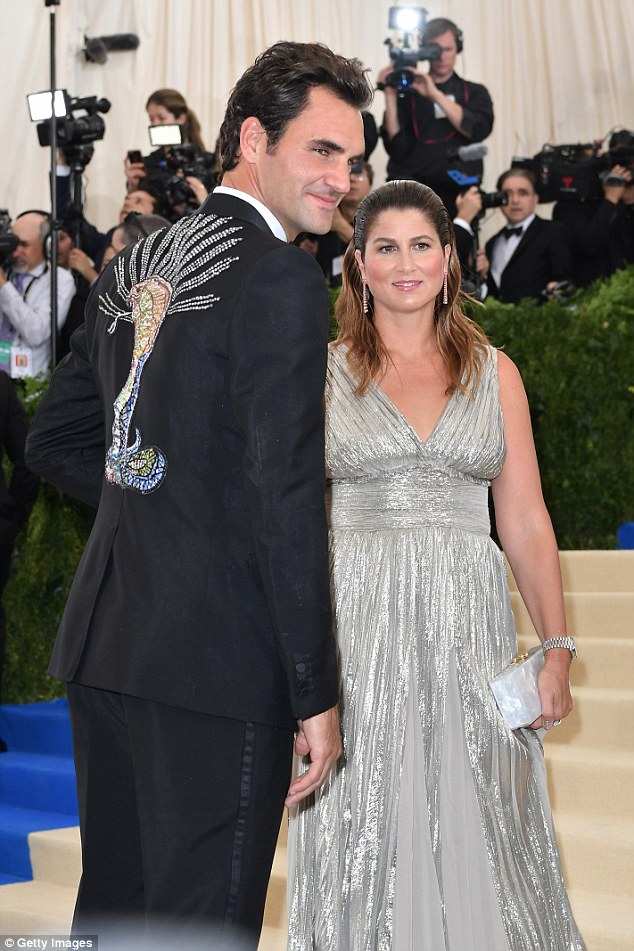 Flashy! He also has a flair for fashion on the red carpet, as seen at the 2017 Met Gala, which he attended with his wife Mirka

‘The question is do we keep it fitted, like the way I have been wearing because when I first started my clothes were pretty baggy. Back in the ‘90s things were different but now it has been very fitted,’ he said.

‘So the question is, shall we change up that silhouette? There’s a discussion there but I think that the fabrics are very important. I like the colors we chose a lot and the detailing because I think there’s so much we can do.’

Federer isn’t Wintour’s only tennis friend — she was also at Serena Williams’ wedding last year, and even helped the new mom choose her wedding dress.

After the event, Williams posted a thank-you note she sent to Wintour, acknowledging her contribution.

‘For the first dress when Anna Wintour asked me what I wanted to wear I said ‘a cape,’ I just want to wear a cape,’ she said.

‘Well Sarah Burton with @alexandermcqueen is the one for you.’ Thanks Anna. Thanks Sarah. I felt like a princess and superwoman all at once. 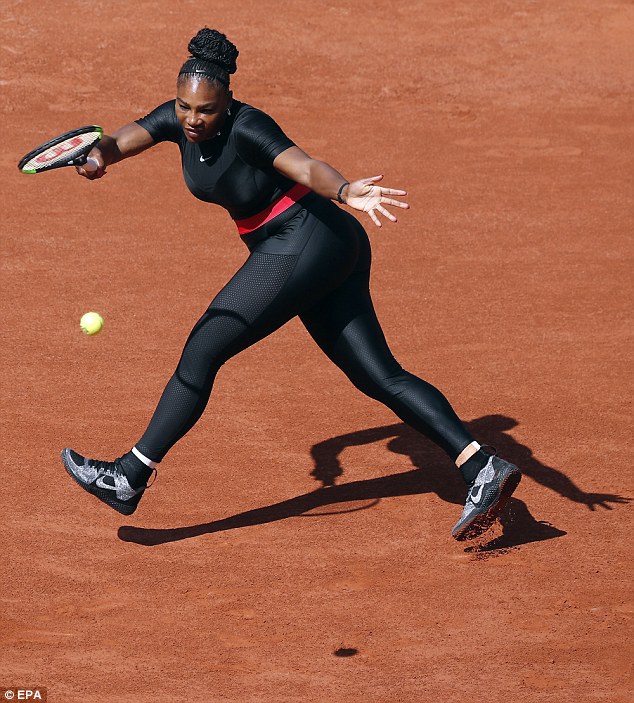 Fashion plate: Meanwhile, fellow Wintour tennis fave Serena Williams was criticized for wearing this custom catsuit at the French Open (which protected her from blood clots) 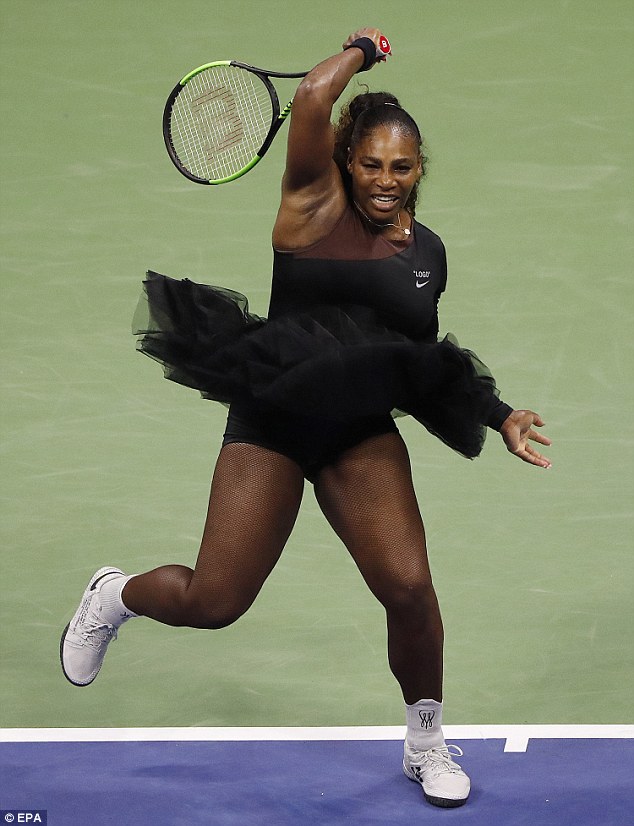 Take that! She responded by wearing the most feminine thing she could come up with to the US Open on Monday — a tutu 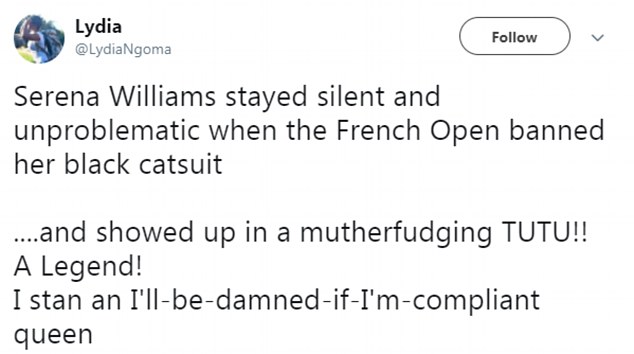 Queen! The move earned her praise from fans on social media

Last word: They love her unspoken clapback on the court

Winner! This woman applauded her for fighting against ‘oppressive, paternalistic standards of femininity’

Of course, Williams’ fashion choices on the court tend to garner more attention than Federer’s, too — and she’s certainly been known to take risks.

In May, she played in the French Open wearing a custom black catsuit, which hugged her figure but was also specially designed to protect her from blood clots — since she suffered a pulmonary embolism after giving birth.

‘It feels like this suit represents all the women that have been through a lot mentally, physically, with their body to come back and have confidence and to believe in themselves,’ she said, according to The Guardian.

But shortly after, French Tennis Federation president Bernard Giudicelli, 60, said that ‘sometimes we’ve gone too far’ with tennis fashion and suggested there should be a stricter dress code for players.

Speaking about her catsuit in particular, he said: ‘It will no longer be accepted. One must respect the game and the place.’

Serena didn’t respond with words — but she found a way to tell him exactly what she thought at the US open this week. 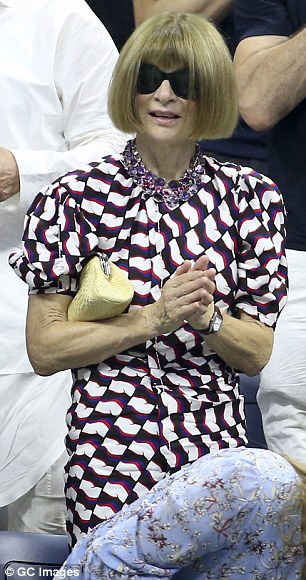 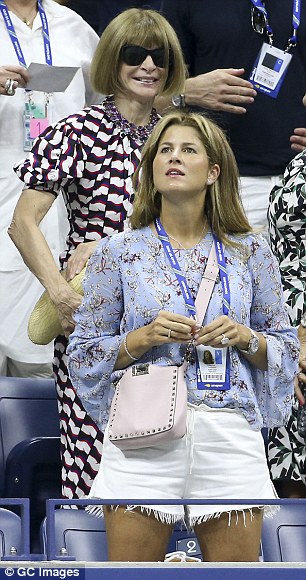 VIP: Anna was pictured on day two of the US Open, sitting behind Mirka, Roger’s wife (seen right). Mirka is an accomplished tennis player in her own right

The 36-year-old played in the frilliest, girliest outfit she could muster, stepping out in a black tutu.

Her move earned internet applause on social media, with fans lauding her for making a statement.

‘French Open: The catsuit is inappropriate and does not meet our oppressive, paternalistic standards of femininity. @serenawilliams: Watch me dominate the court in a tutu,’ wrote one.

Wrote another: ‘The French banned her catsuit. So she rocked up at the US Open slaying with a single shoulder tutu number, plus fishnet stockings to boot. Of course! She got super powers. Talk about THE comeback.’

Wintour, meanwhile, was in the stands at the US Open in New York this week to watch the players at work.

The Vogue editor wore a long printed dress and her signature beaded necklace and sunglasses as she cheered on Federer from the stands.

Wintour is also rumored to play the sport herself, getting up at 5am each day to fit a game in before heading to work.

Wintour was seated right behind Federer’s wife, Mirka, and in front of Hugh Jackman, who was sitting with wife Deborra-lee Furness, while at Arthur Ashe stadium in Queens.