Flamboyant Republican operative Roger Stone has accused Robert Mueller’s team of pressuring him to change his story and implicate the president, in order to avoid a prison sentence.

Stone, 67, was to begin a 40-month prison sentence on Friday evening when Donald Trump announced he was commuting Stone’s sentence.

Stone had been found guilty of lying to Congress, witness tampering and obstructing the House investigation into whether Trump’s campaign colluded with Russia to win the 2016 election.

In his first television interview since being spared prison, Stone on Monday described his battle against ‘the horrific and deep-pocketed resources of the federal government, and these really sadistic, arrogant, politically-motivated prosecutors.’

He added: ‘And I had a biased judge, I had a stacked jury, I had a corrupt jury forewoman.’

The self-proclaimed master of political ‘dirty tricks’, Stone alleged to Sean Hannity on Fox News that he had been pressured to lie, to save his own skin.

He accused Jeannie Rhee, one of Mueller’s prosecutors, of dangling the possibility of avoiding prison if he ‘re-remembered’ events.

‘On July 24 Jeannie Rhee who was heading my prosecution on the Mueller team … – she made it very clear to one of my lawyers, after a hearing, she asked to see him in private, that if I would re-remember certain phone conversations I had with candidate Trump; if I would come clean; if I would confess; they might be willing to recommend leniency to the judge.

‘Perhaps I would not even serve any jail time,’ he told Hannity.

‘I didn’t have to think about it very long; I said “absolutely not”.

‘There was no circumstance under which I would bear false witness against the president. I was just not willing to lie.’ 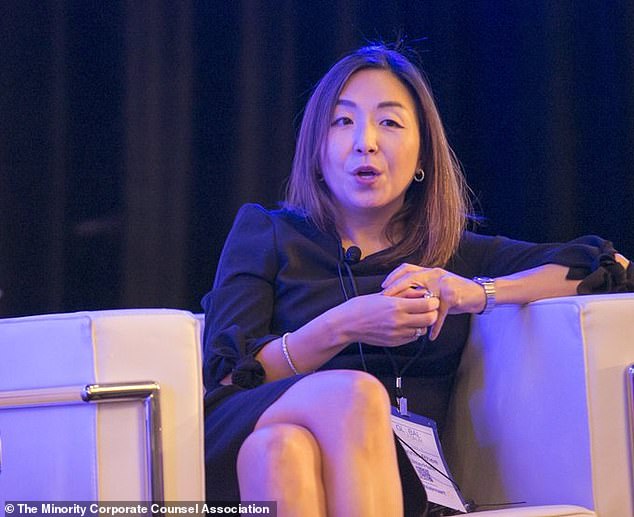 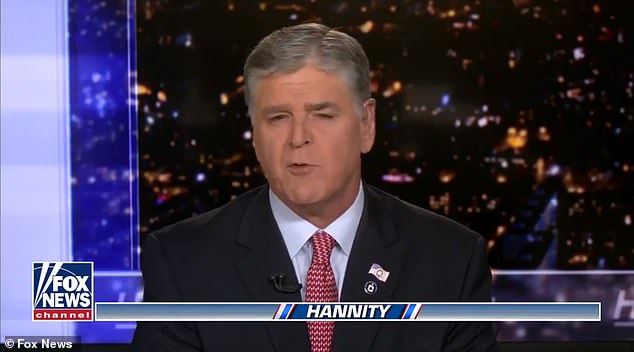 Hannity said Mueller’s case was ‘the biggest abuse of power, corruption scandal in our history’

Stone, who lives with his wife in Fort Lauderdale, Florida, said that in the days since his sentence was commuted people had been shocked at his accusation.

‘Now in the last two days, when I said that, people said: ah, you see, Stone had the goods on Trump, and he traded his silence for a commutation,’ he told Hannity.

‘That is patently false; I never said that, I never implied that.

‘What I said has been consistent – that I would not lie against my friend of 40 years so they could use it for impeachment.’

Stone, who is now considering whether to appeal and seek to have his sentence fully wiped, said that Mueller’s team were desperate for him to change his story.

‘They wanted me to be the ham in their ham sandwich, because they knew the Mueller report, particularly on Russia, was a dud,’ he said.

Stone, a larger-than-life political character who embraced his reputation as a dirty trickster, was the sixth Trump aide or adviser to have been convicted of charges brought during Mueller’s investigation. 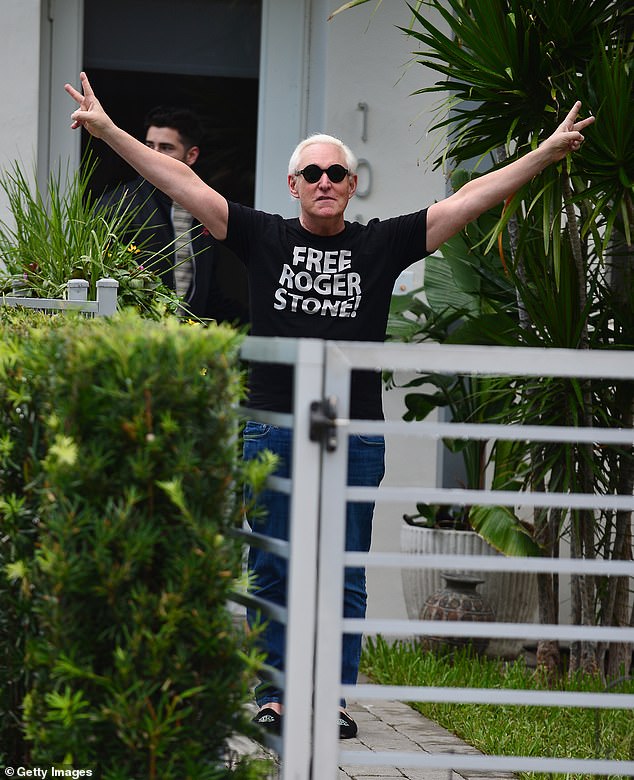 A longtime Trump friend and informal adviser, Stone boasted during the campaign that he was in contact with WikiLeaks founder Julian Assange through a trusted intermediary and hinted at inside knowledge of WikiLeaks’ plans to release more than 19,000 emails hacked from the servers of the Democratic National Committee.

But Stone denied any wrongdoing and consistently criticized the case against him as politically motivated.

He did not take the stand during his trial, did not speak at his sentencing. His lawyers did not call any witnesses in his defense.

But in a highly unusual move, Barr reversed that decision after a Trump tweet and recommended a more lenient punishment, prompting a mini-revolt inside the Justice Department, with the entire prosecution team resigning from the case.

Stone told Hannity that he believed Trump’s commutation had saved his life, noting that he was 67 and being sent to ‘a COVID-infested prison, in violation of current DoJ policies.’

He said 60 inmates had tested positive for COVID-19. 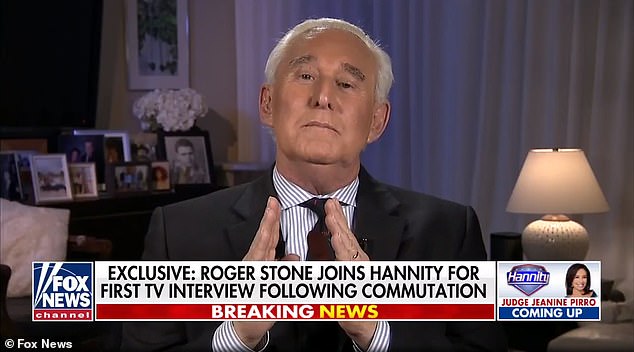 ‘The most important thing here is the courageousness of the president’s act,’ he said, adding that he knew Trump was under pressure from within the White House not to show clemency for his friend.

Trump’s son-in-law Jared Kushner, chief of staff Mark Meadows and attorney general William Barr were all said to be opposed to the commutation of the sentence.

They reportedly urged Trump to wait until after the November election.

‘I don’t think I would have lived that long,’ said Stone, praising Trump as ‘a man of great justice and fairness, and a man of enormous courage.’

And he suggested that he was leaning against seeking a full exoneration.

‘I have to be convinced I could get a fair second trial,’ he said.

‘Because I definitely didn’t get a fair first trial.’

Hannity observed: ‘It’s the biggest abuse of power, corruption scandal in our history.’

Mueller himself over the weekend made a rare incursion into the debate, writing an op ed in The Washington Post defending the work of his team, and asking that Stone remain a convicted felon.

He said that the investigation he led was of ‘paramount importance’ and asserted that Stone ‘remains a convicted felon, and rightly so’ despite the president’s decision to commute his prison sentence.

The op-ed marked Mueller’s first public statement on his investigation since his congressional appearance last July.

It represented his firmest defense of the two-year probe whose results have come under attack and even been partially undone by the Trump administration.