Attorney Seth Ginsberg will appear ‘pro hac vice’ – on one particular occasion – for the convicted former Trump aide, according to a motion filed overnight in Washington, D.C. federal court.

Ginsberg declined to go into specifics about his role in the Stone case, which has been embroiled in chaos since Attorney General William Barr overruled his own lawyers this week by ripping up their nine-year sentencing recommendation.

He told DailyMail.com: ‘Roger has a fine team of attorneys and I’m pleased that he has asked me to assist them during the sentencing phase.

‘My role will be to provide representation to Roger, along with his current team of attorneys, in the sentencing phase.’

Hired: Seth Ginsberg (right) is best known for his role in the acquittal of John Gotti Jr. (center), the son of the Teflon don and head of the Gambino crime family. Ginsberg was part of a legal team led by Charles Carnesi (left) during five trials in Manhattan, which ended in Gotti’s acquittal 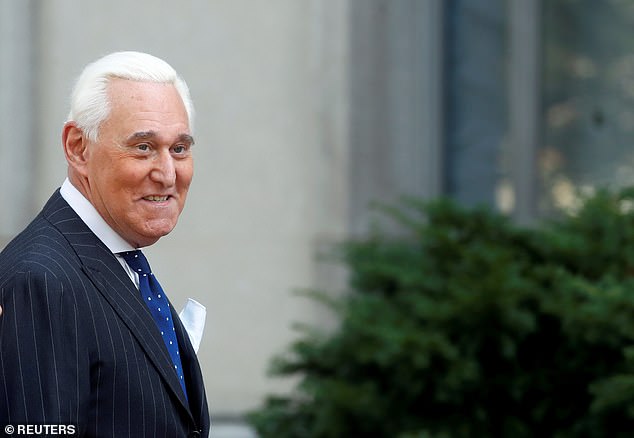 Sentencing due: A hearing to sentence Roger Stone is scheduled for next week 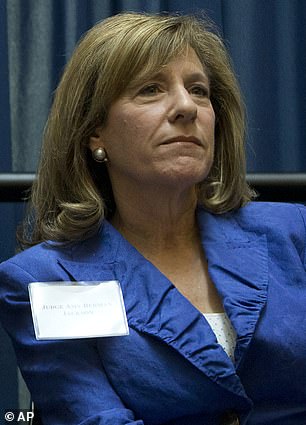 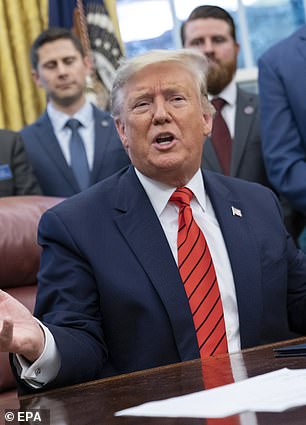 New target: Amy Berman Jackson, the Obama-appointed federal judge who will sentence Roger Stone, found herself in Trump’s twitter crosshairs after a day of unprecedented drama involving the Department of Justice

But he’s best known for representing Gotti – the former head of the Gambino crime family and son of notorious ‘Teflon Don’ John J. Gotti – who faced four trials in five years before he was cleared of racketeering in 2008.

Gotti could have faced 70 years behind bars but walked free when a third jury decided that, while he was likely behind the abduction and shooting of talk-show host Curtis Sliwa, the government had not proved a pattern of crimes, a necessary step to finding him guilty.

Ginsberg, who qualified for the bar in in 1994, assisted famed mob lawyer Charles Carnesi in the trials and went on to represent another Gambino soldier, Thomas Orefice, who is serving 96 months for racketeering and sex trafficking.

The association caused embarrassment for Ginsberg in 2010 when was he barred from the Metropolitan Correctional Center in New York for trying to enter with a bag of pot in his suitcase.

Ginsberg protested his innocence after a corrections officer found a small amount of the drug tucked inside a sandwich bag, blaming the find on his brother who had recently borrowed the case.

‘Thankfully, Mr. Gotti has not required my representation since the last charges against him were dismissed ten years ago,’ Ginsberg said of his mob links.

‘I have practiced criminal defense in the federal arena for more than 25 years and have been privileged to represent a wide range of individuals.’

Ginsberg enters the Stone fray after days of confusion triggered by a Justice Department u-turn asking for a lighter sentence for the self-proclaimed political dirty trickster, 67, who was convicted last November of lying to Congress about his efforts to procure stolen Democratic Party emails from WikiLeaks.

In a fresh twist, it emerged today that the foreperson on the jury that convicted Stone of lying to lawmakers to try to help Donald Trump become President was a failed Democratic candidate for Congress herself and an outspoken Trump critic. 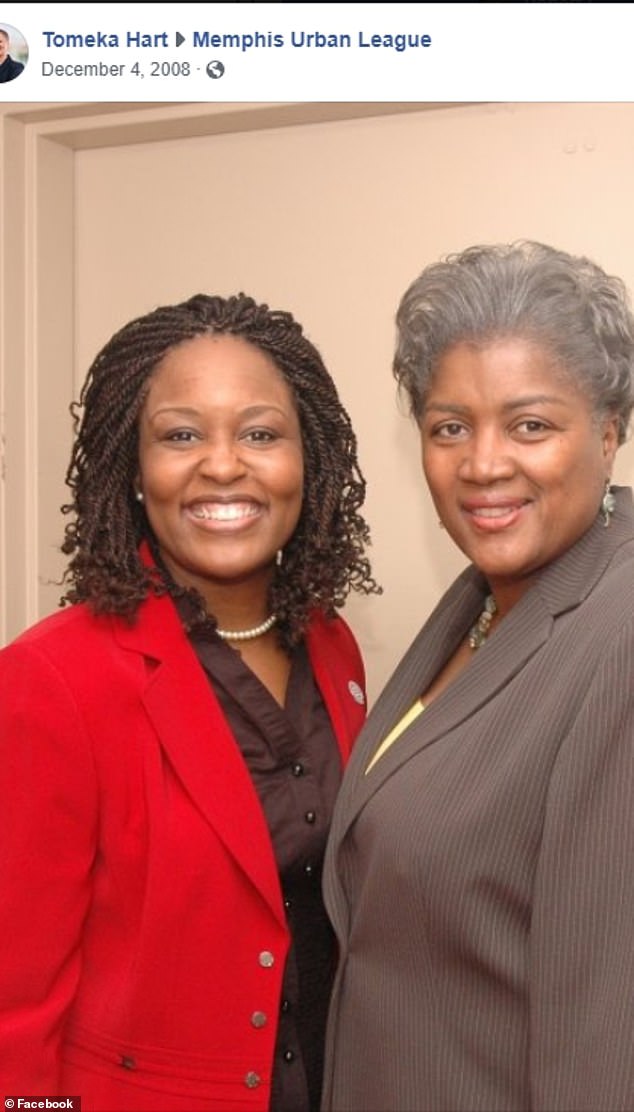 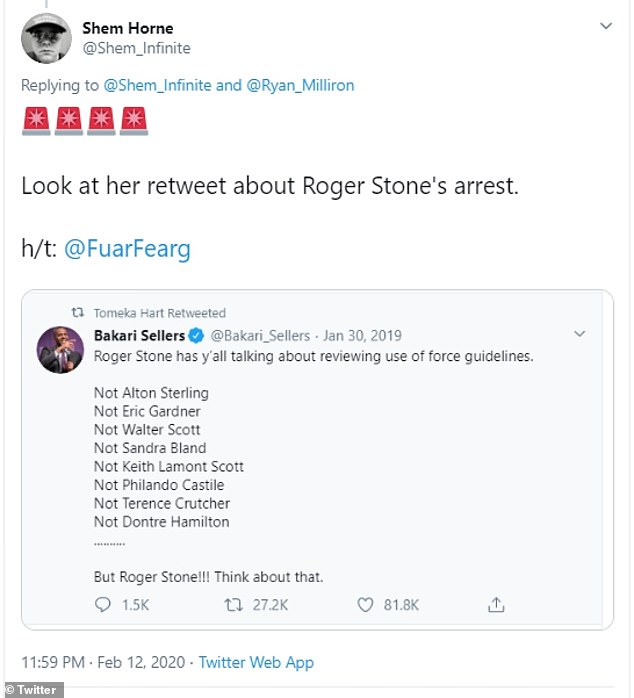 Tomeka Hart, a former Memphis City Schools Board President, outed herself in a Facebook post on Wednesday voicing support for prosecutors.

‘I have kept my silence for months. Initially, it was for my safety. Then, I decided to remain silent out of fear of politicizing the matter,’ Hart wrote.

‘But I can’t keep quiet any longer. I want to stand up for Aaron Zelinsky, Adam Jed, Michael Marando, and Jonathan Kravis – the prosecutors on the Roger Stone trial.

‘It pains me to see the DOJ now interfere with the hard work of the prosecutors. They acted with the utmost intelligence, integrity, and respect for our system of justice.

‘For that, I wanted to speak up for them and ask you to join me in thanking them for their service.’

A review of Hart’s social media posts showed that she had frequently denounced Trump, including calling the President and his supporters racists.

Hart unsuccessfully ran for Congress as a Democrat in 2012 and participated in anti-Trump rallies and protests.

She had also re-tweeted a post by pundit Bakari Sellers dismissing Stone’s claims that the FBI used excessive force when they arrested him at his Fort Lauderdale, Florida home in January 2019. Sellers listed black victims of ‘police force’, including Sandra Bland, Walter Scott and Eric Gardner, scoffing: ‘But Roger Stone!!! Think about that.’

After serving on the Stone jury and finding him guilty of making false statements to Congress, obstructing a congressional proceeding and witness tampering, Hart took to social media again to post emojis of hearts and fist pumps.

Neither Stone’s lawyers, nor the government, have commented so far on her disclosures or the impact they could have for Stone ahead of his sentencing hearing next week.

Stone’s lawyers have already made one failed attempt to secure a re-trial, arguing last week in a completely unrelated motion that a different juror was biased.

They argued the juror, an IRS employee who worked with the Justice Department on criminal tax cases and admitted reading news articles about Stone’s arrest, should have been struck from the panel.

The juror denied having any opinions about Stone when asked about it by U.S. District Judge Amy Berman Jackson during proceedings.

She ruled this week that there were approximately 1,400 lawyers at the IRS and that the defense had failed to demonstrate the ‘sort of inherent bias’ that would have excluded one of their rank from being impartial.