Roger Tuivasa-Sheck has remained his humility after being crowned the game’s best player and being honoured with an emotional haka, admitting it almost brought him to tears.

His international teammates Issac Luke, Jazz Tevaga, Jordan Rapana and Jamayne Isaako performed a powerful haka in the middle of the ballroom.

The Warriors captain told Karl Stefanovic on The Today Show he was ‘buzzed out’ by the haka.

‘I was trying to hold back all the emotions. This is something they do for someone on a special occasion and you honour them with this haka, it’s one of the highest accolades,’ Tuivasa-Sheck said. 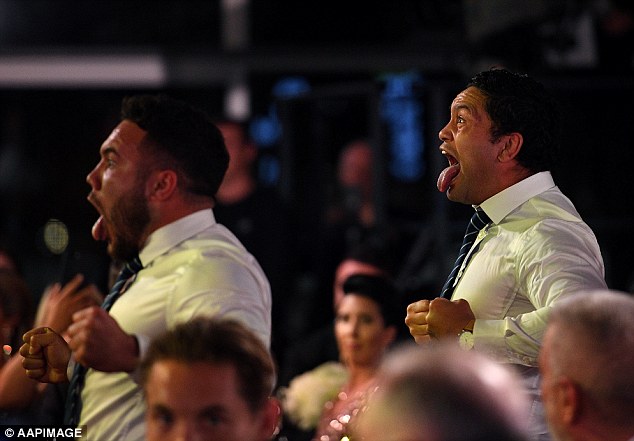 Warriors teammates, led by Issac Luke, paid tribute to Tuivasa-Sheck by performing the haka (pictured) in the middle of the ballroom, bringing him to tears

‘It meant a lot to have Isaac Luke and the rest of the group get up there and having two other players from different clubs honour me with a haka, it means a lot.’

‘I was just grateful to be there and taking in the moment.

‘When I go back and look at the names of the players who have won this… this is not me, these guys are legends and I’m just trying to make my way.’

His father Johnny accompanied him to the ceremony and ‘just couldn’t believe it’ when his son took away the game’s biggest individual honour.

‘I think he was just so proud, he’s not used to having that conversation, that man-to-man ”I’m proud of you” conversation but I know deep down he means well,’ Tuivasa-Sheck said.

‘I’m looking forward to catching up with my parents later on, seeing my mum and my sisters.’

Tuivasa-Sheck backed his old club the Sydney Roosters to take out the Grand Final. 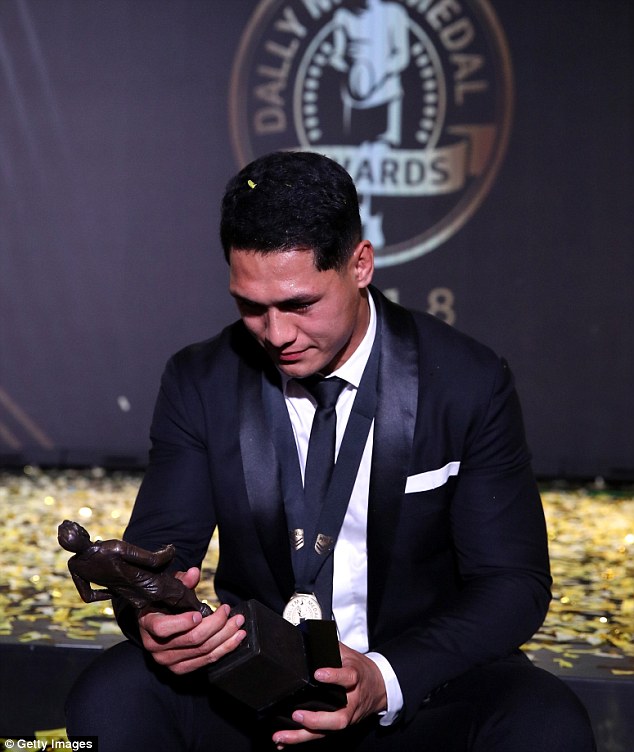 Tuivasa-Sheck was emotional and humble in his acceptance speech thanking his family, club, team and fiancee for their continued support

He also refused to be joined by Russell Crowe, Phar Lap and the pavlova as another New Zealand product to be claimed by Australia.

‘It’s going to be tough to (claim me), New Zealand hard. Still proud to be from New Zealand, and happy to take this award back to Auckland with me, sorry guys.’

The 25-year-old showed raw emotion as he took to the stage to accept the award on Wednesday.

‘I remember the first time I came to these awards in 2013 and Cooper Cronk won the Dally M Award and I was just sitting there thinking it would be a dream to win this award and not knowing the day would ever come.’

‘Feeling truly blessed right now to be up here holding this trophy and wearing this medal. There are so many people I would like to thank,’ Tuivasa-Sheck said.

‘My family, mum and dad, you guys have been awesome. Constant love and support, always keeping me in your prayers, keeping me grounded which is what is most important.’

His fiancee, Ashley Walker, was unable to make it to the event, but Tuivasa-Sheck paid tribute to her. 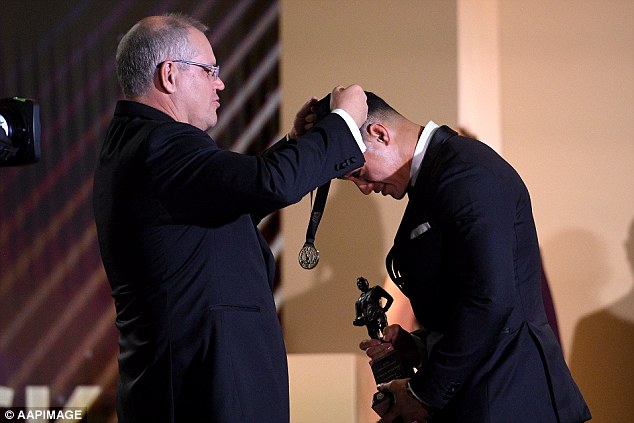 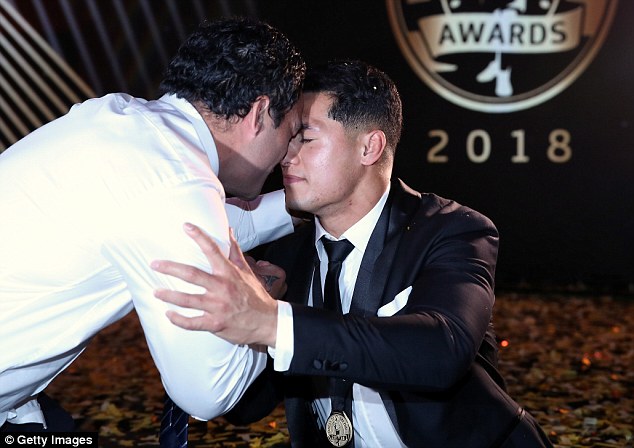 He ended his speech by wishing good luck to all players in the Grand Final on Sunday.

None of the top five – which also included Luke Brooks and Mitchell Pearce – have previously polled in the top five positions at the Dally Ms during their career.

The Warriors fullback trailed by one vote with a round to go, but polled three points in the final round against Canberra while Ponga remained on the sideline injured. 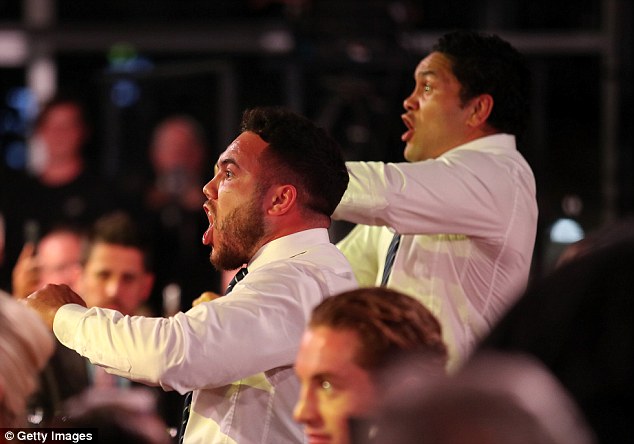 In doing so, he became the first fullback to win the award since Ben Barba in 2012, as he averaged 167 metres a match and busted through a total of 92 tackles.

The Dally M Medal was first introduced in 1980 and is awarded each year to the player who is judged to be the ‘Player of the Year’.

The award was created by News Limited as a way to recognise the most outstanding player in the NRL competition every year.

It was named after a legend of the sport, Herbert ‘Dally’ Messenger, he was a crucial figure in the establishment of rugby league in Australia, captaining the Eastern Suburbs, runners-up in the inaugural Sydney Rugby League competition.

He played 163 first class games and scored 73 tries and has been known as ‘The Master’ ever since, he passed away in Gunnedah, NSW in 1959.